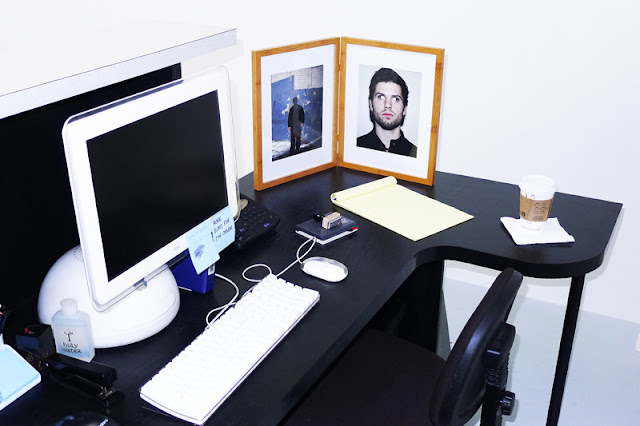 Context vs. Content: Vampire Travel Agency, a group exhibit at sophiajacob, transforms the gallery and art into a fictional set for television.
by Cara Ober

What happens when artists transform a storefront art gallery into the set of a fictional sitcom? People get confused, that’s what. But mostly in a good way. During the opening reception of Vampire Travel Agency at sophiajacob, an art exhibit curated by Max Guy and Peggy Chiang, a woman marched up to the front desk and ordered some takeout. Possibly, she was lost and/or intoxicated. Or maybe the line between art and real life was blurred beyond the point to which even the exhibit’s curators intended. Either way, sophiajacob, a newish art space on Franklin Street, has been transformed to blend smoothly with the small, local businesses that surround it.

Guy and Chiang, roommates and recent Maryland Institute College of Art graduates, have been curating a series of exhibits for the past year in different residential settings under the name Szechuan Best, which is also the name of Chiang’s family’s former restaurant in Randallstown. In their past exhibits, Szechuan Best has transformed home settings into pristine contemporary art environments, so it makes perfect sense that, in their curatorial debut in a dedicated art gallery, they would transform the space into something unexpected. The two wrote the script for the pilot episode for ‘Vampire Travel Agency’ and then reinvented the space as the set, intending every piece of art and furniture in the room to reinforce their vision.

Vampire Travel Agency, the exhibit, is a group show with an impressive roster of artists from New York, Los Angeles, and Baltimore, but what’s interesting about the show is that you can’t tell the art from the other non-art props. The show features drawings, paintings, and sculpture by Milano Chow, Bea Fremderman, Pete Halupka, Rachel Lowing, Kat Schneider, Hayley Silverman, Colin Van Winkle, and Jee Shaun Wang, but the art is displayed like desktop tchotchkes, in cheap poster frames, and on bookshelves, rather than a white-wall-and-podium approach. The result is playful and surreal, a world in which one’s desktop family photos have poltergeist eyes and the water cooler is filled with a dark, maroon-colored substance that just might be blood.

If you would like to read the screenplay, multiple copies are available in stark white covers, displayed in a back alcove. The plot isn’t True Blood, but it does involve a possible suicide, famous rappers, and a vampire rebirth at the Greenmount Cemetery. It’s clever and silly but probably won’t be on your television anytime soon. However, the officially written document attests to the credibility of the exhibit and is an absolute necessity for considering the objects in the show within a meaningful context.

After all, that’s what a curator and an art gallery do: create context for selected works of art, and, with context, assign meaning. Marcel Duchamp proved this first, when he entered a urinal in an art competition under a false name in 1917. At the time, it wasn’t considered to be art, but now it’s a historical relic of art history. In today’s contemporary art world, everything and anything can potentially considered to be art, but a more complicated question is, which art merits worth? And who gets to make this decision? Typically, this power is in the hands of curators, critics, museums, and art galleries.

In Vampire Travel Agency, Guy and Chiang take the stereotype of the modern, heavy-handed curator and run with it, using context to undermine value and create content in a humorous and intelligent way. For example, most art galleries would venerate the delicate pencil drawings of Milano Chow, but here they are placed in ill-fitting Walmart poster frames and come off as forlorn. Likewise, the photos of Kat Schneider are displayed in a revolving postcard display, available to be touched and examined, instead of protected under glass. An impressive three-dimensional skull made of flattened Corona bottle tops by Jee-Shaun Wang sits next to a stack of books on a plywood shelf and is barely noticeable.

Other details, like the stack of magazines in the windowsill and the dead beetle on top of the office desk, take you back to the original Duchamp question. Are these pieces of art, too? Or are they props for the TV show? What is the difference? By exhibiting works by credible artists alongside homemade and readymade office props, Guy and Chiang prove how absurd and arbitrary the art world can be. This could come off as bitter or sarcastic, but the presentation is so sly and humorous, it becomes a joke that includes everyone. Even when the joke is on us. Now about those French Fries…

Vampire Travel Agency by Szechuan Best is on view at sophiajacob through August 25, 2012.
* all photos by DJ Armacost