Critical Writing in the Arts Workshop with BmoreA [...] 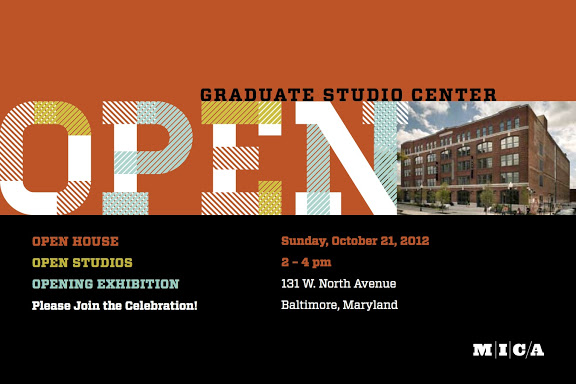 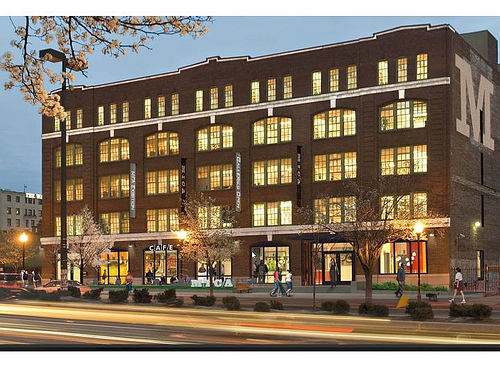 The new MICA Studio Center building was known to many of us as the ‘Bank Building.’ Located at 131 W. North Avenue, the warehouse was previously used as the JoS. A. Bank factory at the turn of the century.

I’m not sure who used the building for the last fifty years or so, but in 2001, as the newest inhabitants of the building, my grad student studio neighbor remarked cheerfully that it smelled “like mouse pee” and she was right. The building exuded neglect, but we didn’t care. As MFA candidates, we were thrilled with the huge expanse of space the building gave us and the permission to make a total mess. At final crits that year, one student was lauded for creating the ultimate ‘wall intervention’ – a jagged window cut through her studio wall that forced the issue of proximity and liminal space into real life.

Ten years and $18,000,000.00 later, the Studio Center is a whole new animal. The space now boasts pristine surfaces, gleaming appliances, a cafe, a theatre, and several sexy-large galleries to exhibit work, as well as studio spaces for all types of graduate and undergraduate students. Let’s face it: cheap real estate is still one of Baltimore’s most appealing qualities, so one advantage of attending MICA over other institutions are large work areas and private studio spaces. The Studio Center, and MICA’s commitment to the Station North Arts District, serves as an anchor for the burgeoning neighborhood, which now hosts several bars, restaurants, cafes, art spaces, and art-based businesses, which is a HUGE improvement from my grad school days when Micky D’s was it for local cuisine.

If you’re curious about the new incarnation of the Studio Center, there’s a free open house this weekend on Sunday, October 21 from 2-4 pm that coincides with the reception for Invited: Celebration Station, an exhibit featuring “two gallery floors of celebratory-themed artworks” (I have no idea what that means.) So pop in, and visit studios of undergraduate students as well as exhibits and studios for Mt. Royal School of Art, Hoffberger School of Painting, Photographic and Electronic Media, MFA in Curatorial Practice, and the Post-Baccalaureate Program in Fine Arts.

I guarantee, if you are a MICA graduate, you will be super JEALOUS! But, not to worry, the romantic motel view across the street where Brother Mouzone held his last shootout is still exactly the same.