Fun A Day Baltimore was inspired by a project of the Artclash Collective, a group of Philadelphia-based artists whose mission is to “organize art projects and shows that aim to be fun, inclusive and participatory. With each project/show, we seek to create a welcoming forum for people to share their art and form a community. Our shows are always free, non-juried and all ages. We hope they help people embrace their creativity and serve as an inspiration for those who attend.”

Fun A Day is now in it’s ninth year nationwide, and even worldwide including England and New Zealand. The concept is simple: pick a project, do it every day in January, then show your work the following month in a big group show. All events are volunteer run. Baltimore’s enthusiastic response includes over 68 artists in its second year. During a festive, well-attended opening night on Saturday, February 9th, artists were proudly photographed with their children, friends, and families. The refreshments table was a crowded potluck spread of homemade sweets served straight from labelled tupperware. The ample gallery space was buzzing with energetic conversation from an eclectic mix of folks who had a warm regard for the work. A large self-help scroll of negative thoughts and their concluding positive affirmations trailing from wall to floor invited viewers to share their own words with colorful markers. Another artist invited viewers to be photographed with their friends donning silly accessories. Leave your address, and one can receive a handmade postcard, or create their own with a spread of collage making materials on a card table.

Molly Brennan’s polaroid-esque collection of daily illustrations capture her response to a list of pre-selected words. The 4 x 4.5 inch tiles include a pair of new boots, a fleeting emotion, a lunch counter landscape, a vignette of her home, a self portrait. Brennan is a plein air oil painter. This departure was a challenge to work from her imagination, instead of translating the landscape before her. Brennan sparsely titled each piece in the lower left corner, and the date in the lower right. The artist used an intentionally warm palette of muted yellows and pinks with watercolor, tissue paper, gesso, and micron pen on matte board. I would have loved for it to be displayed in a calendar grid. Some artists labelled their work by date, exemplifying the framework of the project, however, it wasn’t necessary to make a new piece everyday. Arguably the most sophisticated piece in the show, video artist Sandy Triolo draws an inventive correlation between Disney’s 1964 musical film, Mary Poppins, and the modern day Occupy movement. Carefully collaging images of the Los Angeles and Oakland riots rapidly superimposed with tense stills of the otherwise sugar-coated film plot, reveal broader themes. The artist teases them apart in her statement, “ While Mary Poppins instills the love of magic, mystery and adventure in the young and she teaches “family values”, the film also exposes class boundaries, the power of banking and finance, the contradictions of capitalism, charity, women’s independence, faltering imperialism, and family roles and responsibilities.” The bankers seize the children’s coins in a pivotal scene which created a frenzied chaos, causing others to withdraw and close their accounts at once. Julie Andrews’ familiar face eerily melds with violent modern day news coverage in an unnerving clash that paralyzes the viewer, unable to look away. A jolly party banner that spells out the words “Beautify Public Space” hangs above framed bulletin boards with dozens of photographs documenting sidewalk chalk drawings, googly eyes on an exterior wall, distributing balloons to pedestrians, tearable pun flyers, and yarn bombings among others. While the display evokes a scrapbook or school presentation, one cannot help but smile at the unexpected spectrum of efforts artist Mary England makes to spread good cheer.

Fun A Day Baltimore is an unpretentious, inclusive, refreshing celebration of showing up daily to the creative process. It really makes you wonder what you could commit to making every day for a month.

Author: Jill Gordon is an urban explorer, fiber artist, and writer who is both enamored and bewildered by the grit and vitality found in her fair city. She is a member of Mother Made Baltimore. Jill Gordon walks to The D Center on cold winter evenings for kicks, and can be contacted at MsJillGordon@gmail.com. 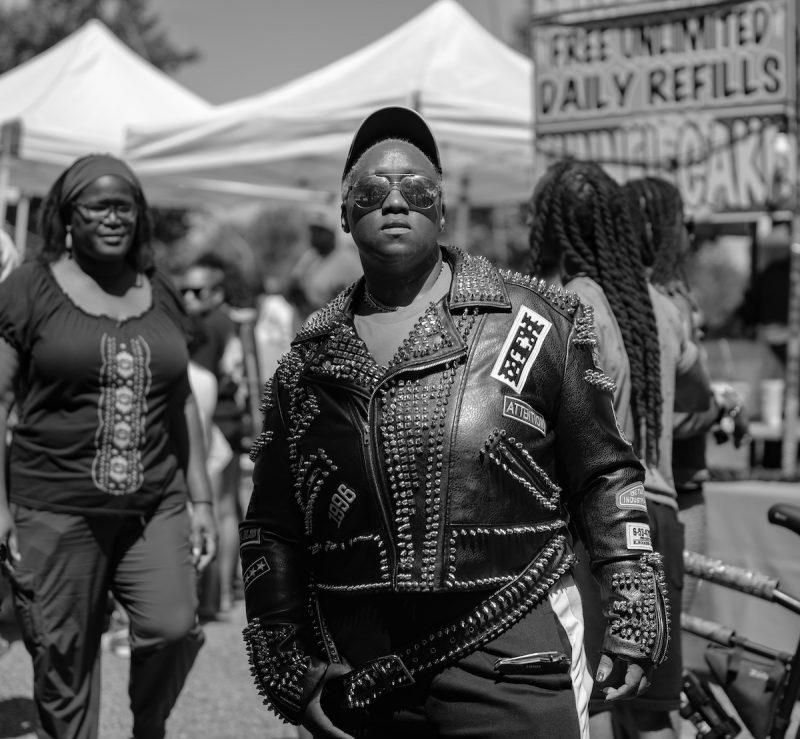