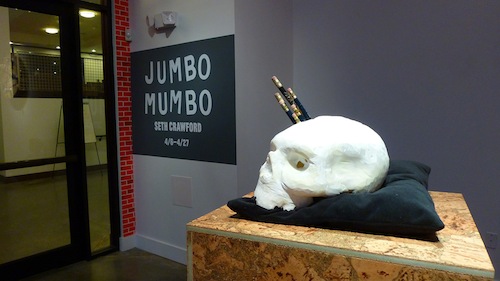 Is This Thing On? Seth Crawford at Gallery CA Nothing from Conor Backman: The Other Real, a solo exhibition at Nudashank, is what it seems from a distance. Pink foam, artificial grape flavor, expensive perfume, wrapping paper: all are shadows of reality. Backman’s current work is inspired by extensive contemplation of the relationship between reality and human-made representation, harkening back to some of the oldest and most fundamental stories of representation and perception in Western culture. The Brooklyn-based artist heavily employs lifelike painting and sculpture, not only as their own forms of conceptual art, but as a method of upending conceptual art into a clear pretense of itself. The entrance of the exhibit is flanked by the works Tabula Rasa and Reference Index, respectively, a sculpture of an open white book and hyper-realistic painting of a wall tacked with paper ephemera. While these seem unremarkable upon first entering the exhibit, they set a subtle precedent for Backman’s style and establish his source material for the rest of the work – the items pictured in Reference Index hung in his studio while he worked on the rest of this body, and inspired specific pieces in the collection. Upon leaving, the first two pieces also feel as though the wrap up the experience, book-ending the show with an uninscribed book and scrap notes. The rest of the work is not nearly as straightforward. At first glance, I found the pink diptych, I’s and Other I, uninspired. Is this really where a highbrow artist has brought his craft to pose some kind of statement? A clear parallel exists between the Pink Panther and Pink Panther insulation foam, yet he didn’t take the price tag off the latter, and the image of the former is just printed on LaserJet paper. Yet, there is no price tag or blue tape. There is no foam box. There is no printout of the panther, or torn business envelope around him. Everything hanging on the wall is a trompe-l’œil. Backman has mimicked decisions of craft and presentation with a simple trick of realistic representation, flipping the superficiality of the pieces on its head, and piquing my curiosity to consider the diptych as an imitation of its own surface identity. The material trope of rarified pink foam is undercut, simulated in wood painted pink and blue, with a hand-drawn barcode label. The hand-copied panther looks in a mirror checking if something is in his eye – an animal aware of the symbolic nature of the mirror, a drawing of a drawing examining its own drawn reflection. The paper facsimile of a torn business envelope, as if the panther image was sent through the mail, implicitly contained the picture like the flimsy-looking pink box perhaps contains some delicate slice of self. Something unclear brews between these deceptive sculptures, bland yet enigmatic for their discussion of semblance, reflection, encasement. Zeuxis and Parrhasius, an arrangement of grape-flavored drink cans on a low platform at the virtual center of the exhibit, is concerned with the Greek myth of the two Greek painters. Zeuxis fooled hungry birds with a realistic painting of grapes, but Parrhasius fooled Zeuxis with (a realistic painting of) a curtain, which Zeuxis assumed would be pulled open to reveal his rival’s picture. Standing amidst the factory-made cans are “can safes,” replicas of soda and juice cans sold as hiding places for valuables, calling into question a greater dialogue of art and representation than familiar pop art cans, which addressed the immediate present. A physical curtain referencing the myth of Zeuxis appears in the elegant Pure PPP, a large empty canvas stretcher frame behind a shower curtain on a curved rod protruding from the gallery wall. The curtain is not so close to the wall that the composition becomes flat, but not so far that any true sense of space extends into the gallery. The fogged plastic softens the edges of the frame behind it, lending tactility to the intimacy of the implied shower space, and entangling viewers as voyeurs of the vulnerable raw art material. One piece in the show is particularly art historical: Positive Feedback Loop, a sort of master copy of the famous Diego Velasquez work Las Meninas, painted on a realistic semblance of an open textbook. As the painting and the textbook form are copied with similar faithfulness to detail, the Velasquez copy is merely an element of the textbook master copy. Las Meninas is a particularly apt inclusion because it presents a royal consideration of the convoluted relationship between painting, the frame, and viewpoint. Another piece called Greek Gift consists of an exotic nature-patterned roll of wrapping paper, reproduced in paint on a metal tube, stretching a reference to the Trojan horse of the Iliad via the trompe-l’œil, and emphasizing wrapping paper’s ability to conceal, to disguise. Another called Di/ consists of half of a double page pink ad in a magazine, featuring one trompe-l’œil page depicting Dior perfume and one real page depicting Natalie Portman, mounted behind tinted Plexiglas. Backman was inspired by the idea of diorama for this diptych, a thought he carries into his latest body of work dealing with sculptural paintings as a sort of diorama. They are paintings of paint, an overt combination of pictorial brushstrokes and haphazard arrangement of the mixed paint daubs used as a palette for the image, giving the piece sculptural context, at least as relief. Backman seems glad to release his hyper-realistic grip on the work, freeing himself in a colorful palette and expressive brushstrokes. The painting/palettes are the latest direction in his work – Backman was initially inspired to paint an image of a cave with colors from a glass palette, then place the glass over the picture as part of the frame, superimposing the unrefined state of the paint upon the composition. He sees this linked to Plato’s allegory of the cave, the metaphor of prisoners forced to see nothing but shadows cast from the mouth of their cave cell onto the wall before them in the darkness. With their heads shackled in one position their whole lives, the only world they ever knew was of shadow. Once Backman explained his thoughts on the allegory, evidence of the concept became clear all throughout the show. Though the reference is never specifically mentioned in the work, he has designed the whole show as a Plato-esque cave, full of ambiguous art objects to indicate a higher reality beyond the gallery, casting shadows into the exhibit. One piece even depicts paper and tape on window-sized canvases, as if to block out light from the other side, possibly an insinuation that audiences are the prisoners.

Backman has succeeded in creating a show with few dead ends. Some may flounder in the shifting array of work, but it’s really a playground for artistic thought, a sprawling network of possibilities laid out evenly through a single physical space. Each piece invites viewers to take refuge from the variety of the room, and then references another piece nearby. The classical antiquity allusions are not shallowly associative; rather they attempt to tie together distantly related elements of art, culture, and thought, based upon what Backman clearly sees as a common conceptual denominator.

These works are not unlike his earlier pieces, such as his painting of mountains copied from landscape imagery on beer cans, text omitted. The virtuosic accuracy of representation is generally the most intriguing aspect of the work, but the ideas inherent in each of the pieces are appropriate diversions within the general intellectual space of the show. Backman is not interested in clarifying his ambiguous and notional thoughts, seeming to prefer his work as evidence of something he cannot grasp, or chooses not to. He simply beckons viewers to immerse themselves in his Other Real, a gallery of art shadows.