The Isa Genzken Retrospective at MOMA knocked my socks off! I like tacky shit a lot, and I think my work suffers from a German sensibility, so I found this exhibit inspiring. It made me want to make sculpture!

A retrospective is an opportunity to experience the evolution of the artist, to view the messy parts along with the smooth sailing. In Genzken’s MOMA Retrospective, her work runs the gamut from elegant minimalism, to Bauhaus-like sculpture, to post-modern garbage installations, to the point where bodies of work appear to have been made by completely different people. This, to me, was most exciting. So often artists are instructed to be consistent in their work to the point of boredom. This exhibit argues, rather successfully, the complete opposite.

Some of the least successful works relate directly to the “messy collage found material mishmash sculpture” that is everywhere right now, although Genzken deserves props for doing it early. And part of the problem with these, despite a juicy tactility and popping color, was their placement on awkward bases that seemed as improvisational as the pieces themselves. Other bodies of work were refined, minimal, symmetrical, and geometric, with clean lines and just enough sensual resin to animate them.

Official MOMA Text: Isa Genzken (German, b. 1948) is arguably one of the most important and influential female artists of the past 30 years. This exhibition, the first comprehensive retrospective of her diverse body of work in an American museum, and the largest to date, encompasses Genzken’s work in all mediums over the past 40 years. Although a New York art audience might be familiar with Genzken’s more recent assemblage sculptures, the breadth of her achievement—which includes not only three-dimensional work but also paintings, photographs, collages, drawings, artist’s books, films, and public sculptures—is still largely unknown in this country. Many of the nearly 150 objects in the exhibition are on view in the United States for the first time.

Genzken’s work has been part of the artistic discourse since she began exhibiting in the mid-1970s, but over the last decade a new generation has been inspired by her radical inventiveness. The past 10 years have been particularly productive for Genzken, who, with a new language of found objects and collage, has created several bodies of work that have redefined assemblage for a new era. These groups of sculptures range from smaller, diorama-like works to room-filling installations.

Gentzken kitty luggage in the MOMA lobby. With owls.

If you are looking at this feeling baffled that it was all made by the same person, then YES! Exactly!

The MOMA Garden on a rainy day. The fog was so dense you can’t even see the tops of the buildings!

Then, on to Chelsea Galleries…

Roni Horn at Hauser & Wirth:  “Everything was sleeping as if the universe were a mistake” – this show included yummy-gummy sculpture and the sophisticated drawings below.

Marc Dennis: An Artist, A Curator and A Rabbi Walk Into a Bar at Hasted Kraeutler

This show was full of beautifully painted, silly one-liners, but wins for best title of a show.

This is an MGM Lion from a Hollywood inspired exhibit at Greene Naftali Gallery… where we ran into Baltimore’s most enthusiastic, recently converted art maven – Mera Rubell!

She said she was hitting 20 Chelsea Galleries that afternoon, telling them all about the Baltimore Boesky show and how great Baltimore artists are. Awww.

Checking out model trains above… then the Serra’s New Sculpture at Gagosian, then a photo op with Mera Rubell…

What a stunning show! I wanted to take it home with me and am now considering drawing directly onto my walls. Why don’t more artists do this? It’s such a tragedy, that this will all be painted over soon, and I love that.

Mixed Greens Window Installation: Jon Rappleye “All the Way Up to the top of the Night: (Illuminated)
On exhibit through March 15, 2014 Photos below from Mixed Greens, who wins the award for being the “nicest and most polite gallery” in Chelsea

and then we went to PACE… both of them…. and it was overwhelming.

After this decadent spectacle, I needed a break from art.

Walking the Skyline is such a treat! Check out the mist coming off the water… Oh. And giant advertisement selling Brooklyn to breeders. (I’m pretty sure that’s redundant.) 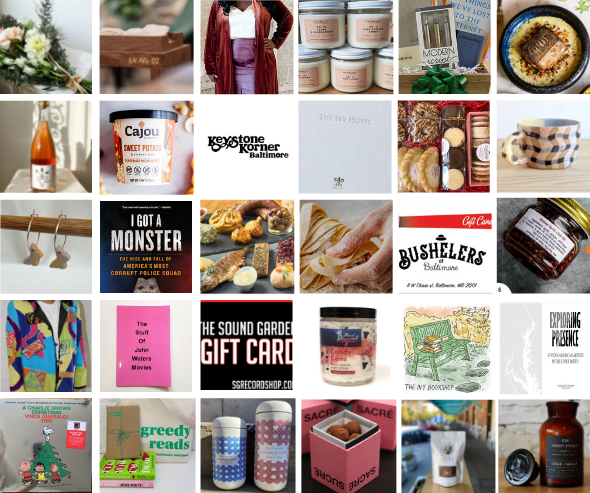 Shop local this season from Baltimore-based stores and creators.