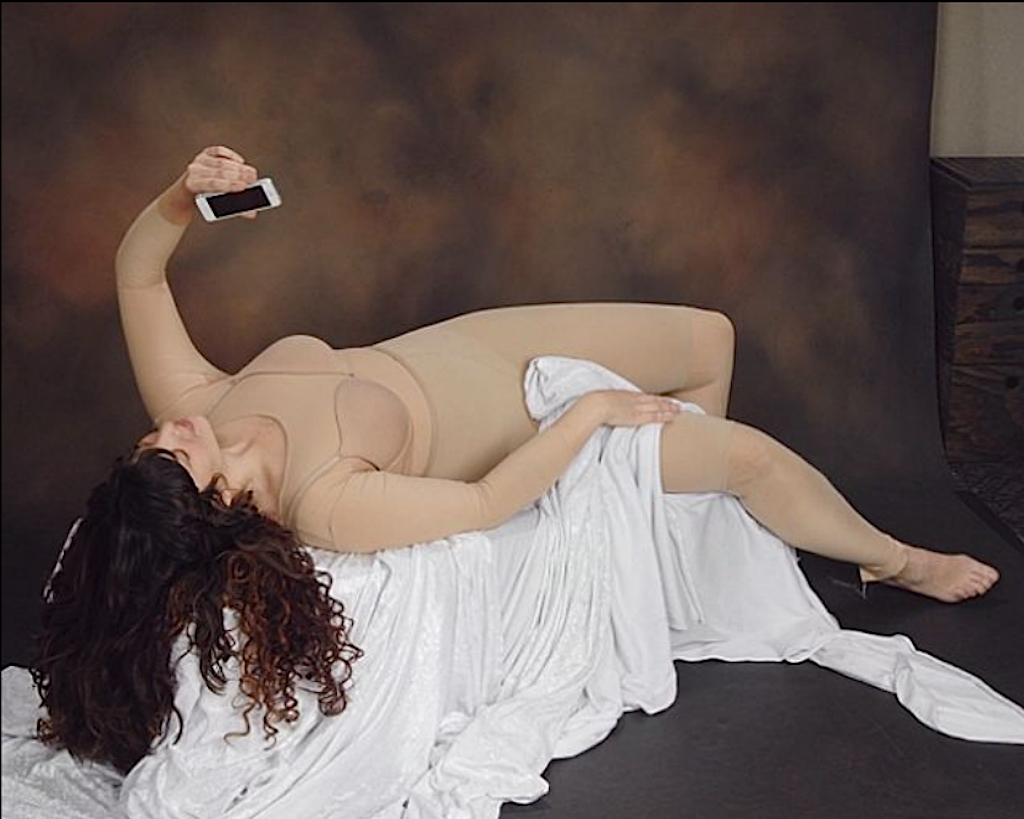 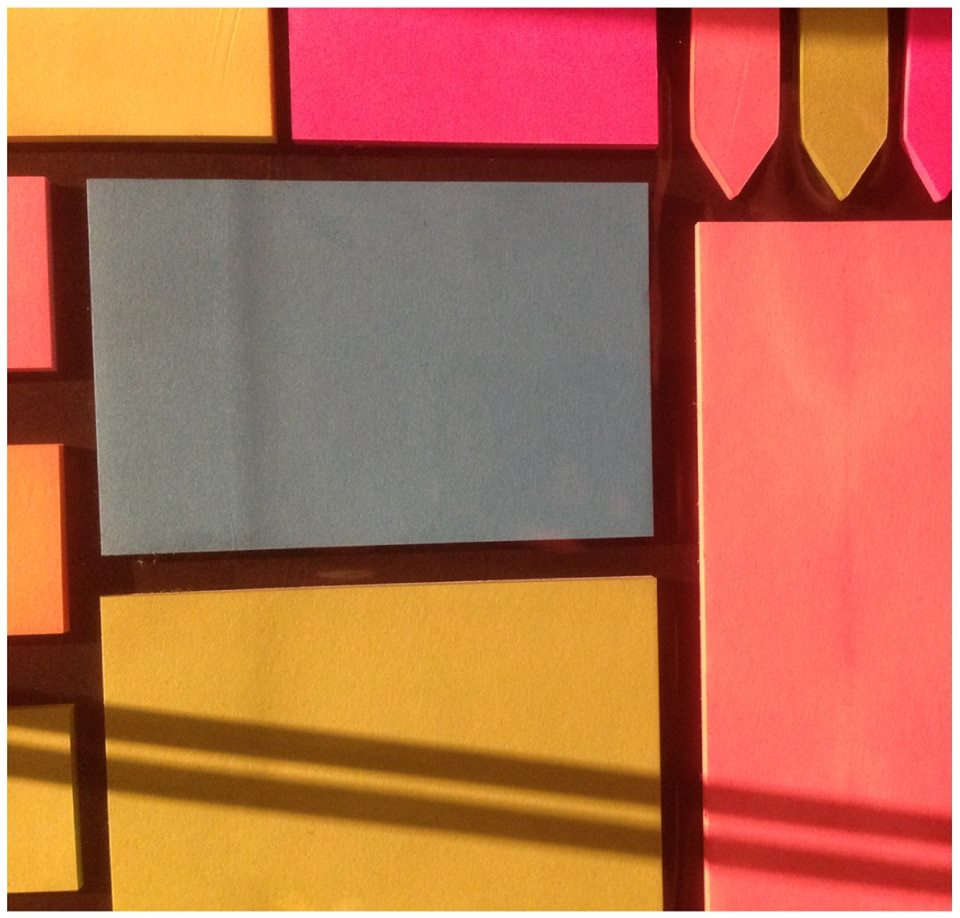 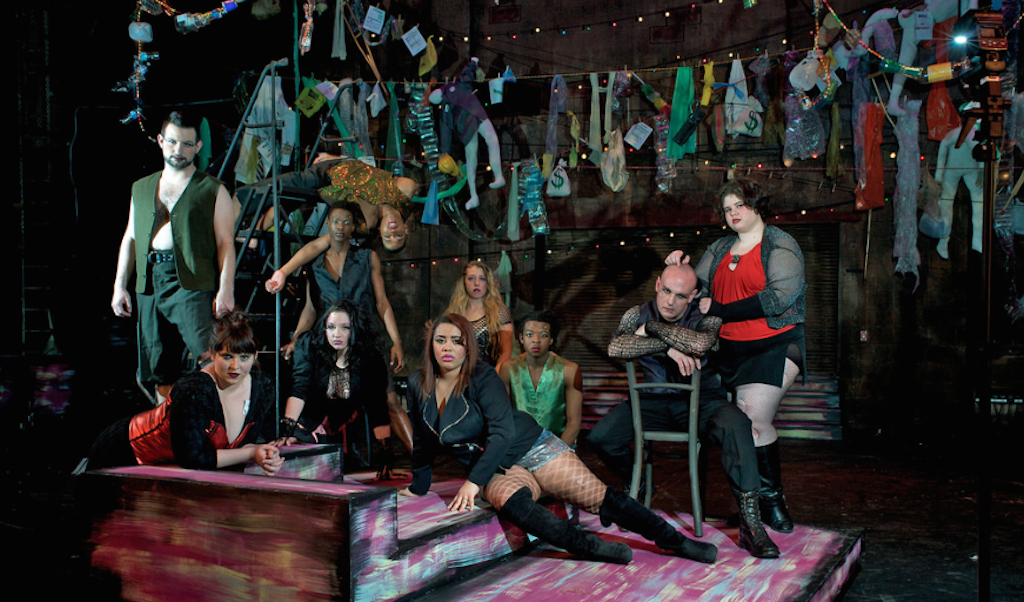 The best of theater provides a unique presentation of a universal theme and challenges its audience to think about what matters.  The best of college engages students to think for themselves and to become better citizens of the world.  The Community College of Baltimore County’s production of The Consumables, at the College Community Center Theatre on the Essex Campus, accomplishes all of that and more.

The Consumables is an original, devised piece of theater that explores the concept of the working poor in America. A devised piece usually begins without a script of any kind. The cast, through a series of improvisational exercises and explorative moment, develop the concept and create the final product. In this case, the collaborative, an ensemble of CCBC students and alumni, is led by director Julie Lewis, choreographer Melinda Blomquist, and musical composer, Anthony Bianco.

“It was very difficult not to dig in and write because that’s what I do,” said Lewis during our interview, “but this piece was about the ensemble and it was the ensemble that had to find the vision.”

The play is a physical, visual, and musical expression of several interviews that the students conducted throughout Baltimore. Each student spoke with a random selection of Baltimore residents from cross demographics and asked them a uniform series of questions about their work and living experiences.  Then, each interview was presented to the ensemble and, together, the cast explored the most powerful moments that lay within them.  Throughout the process, Bianco composed an impressive musical score that enhances the themes and the emotional tones that emerged.

I attended a rehearsal during the final stages of the process, when the work was nearly complete. I spoke with the cast and crew after the show and discovered that their experience was not only theatrical, but personally enlightening as well.

“I learned that it’s really expensive to be poor,” said ensemble member and graduating student, Sarra Lewis (not related to the director).  “So many people are working two or three jobs,” she said, “and, even though they are exhausted and still broke, they consider themselves successful just because they manage to get their bills paid.”

Through a series of vignettes, the ensemble speaks for those whose voices cannot be heard in the din of the corporate clamor for productivity and profit.  With intense physicality and a pulsing push of music and movement, the ensemble attempts to sweep its audience up into the fight for equity in the workplace. The Consumables is a visceral experience and a fun ride from beginning to end, but it is much more than that. It is a thoughtful, conscious examination of this country’s attitude about what and who has value.

According to the students, some of the text was inspired by suspiciously perky, minimum wage employees at the local fast food restaurant.  Other parts were “found” in overheard phone calls from parents to their insurance agents. For four months, the students were instructed to inquire and to listen – two essential skills for any actor or activist. In addition, they read David Shipler’s The Working Poor for inspiration. This is the text that was selected by the Community Book Connection to be read and discussed across the college and across various disciplines. Many students in the audience will have read this work of non-fiction in class.

Ensemble member, Glen “Carroll” Haupt was eager to talk about the part of the show that was drawn from his inquiries – a restaurant run exclusively by people with graduate level degrees in math, history and science.

“You think if you get a good degree, one like math or science, then you will be able to find work,” he said. “But, the guy I interviewed graduated with an upper level degree in Biology and could only find employment as an intern making twenty five thousand dollars a year.”

He hesitated and looked around at the other students who shared the same look of concern.

“That doesn’t even cover his student loans,” he continued.

One of the most compelling insights the students shared was that of Itula “Lene” Oselene, recently arrived to Baltimore and to CCBC from Nigeria.

“In my country,” he said, “they would never believe what I have learned. They believe that America is heaven and every person in America has everything they could possibly imagine. If I told them Americans have no money they would laugh at me.”

All the students nodded and smiled. Bianco, the vocals and music of the show responded to Lene with a George Carlin quote, “The reason they call it the American Dream is because you have to be asleep to believe it.”

The show does not feel like a soapbox, though.  On the contrary, it is filled with intelligent and funny characters, like the mathematical chef who ponders whether it’s rational for his customers to attempt to finish their pie.

The dance numbers are as intense as they are entertaining. During the rehearsal process, the students are pushed physically and emotionally. “Don’t change the movement,” shouts choreographer Blomquist, “but change the quality of it. Feel the violence of it!”

And within moments it is clear that they do. Empathy and compassion are at the heart of this devised piece. The importance of every movement, every gesture, is explored and exercised in every practice – What does it say? What does it mean? How does it feel?

The theater program at CCBC produces five shows a year; two at the stage in Essex, and three in Catonsville. The Performance Arts Center at CCBC Essex has a grand proscenium stage. The cushy stadium seating makes it one of the most comfortable theaters in Baltimore.  Their sister theater in Catonsville is equally inviting and the productions are driven with the same intensity.

Nothing is taken for granted. The rehearsal process is extensive and usually includes deconstructive readings and discussions of the material by the entire class, not just those cast in the production. As a result, the productions are usually well thought out from every angle and the freshest ideas are applied to the final products.

Theater, on the collegiate level, tends to be overlooked by general audiences. The big theaters or the professional black boxes are the go-to venues when one is seeking a quality night out. But academic theater in Baltimore is managing to hold its own.  UMBC has an award-winning theater program and an excellent reputation for edgy productions and Johns Hopkins has the Barnstormers, who consistently produce intelligent and challenging material.

CCBC may be a community college, but its ambition is to provide theater that is spectacular and innovative. Where established professional theaters can get caught up in the niches and routine of their reputations, academic theater is still inquiring and discovering the possibilities that the world and its students have to offer.