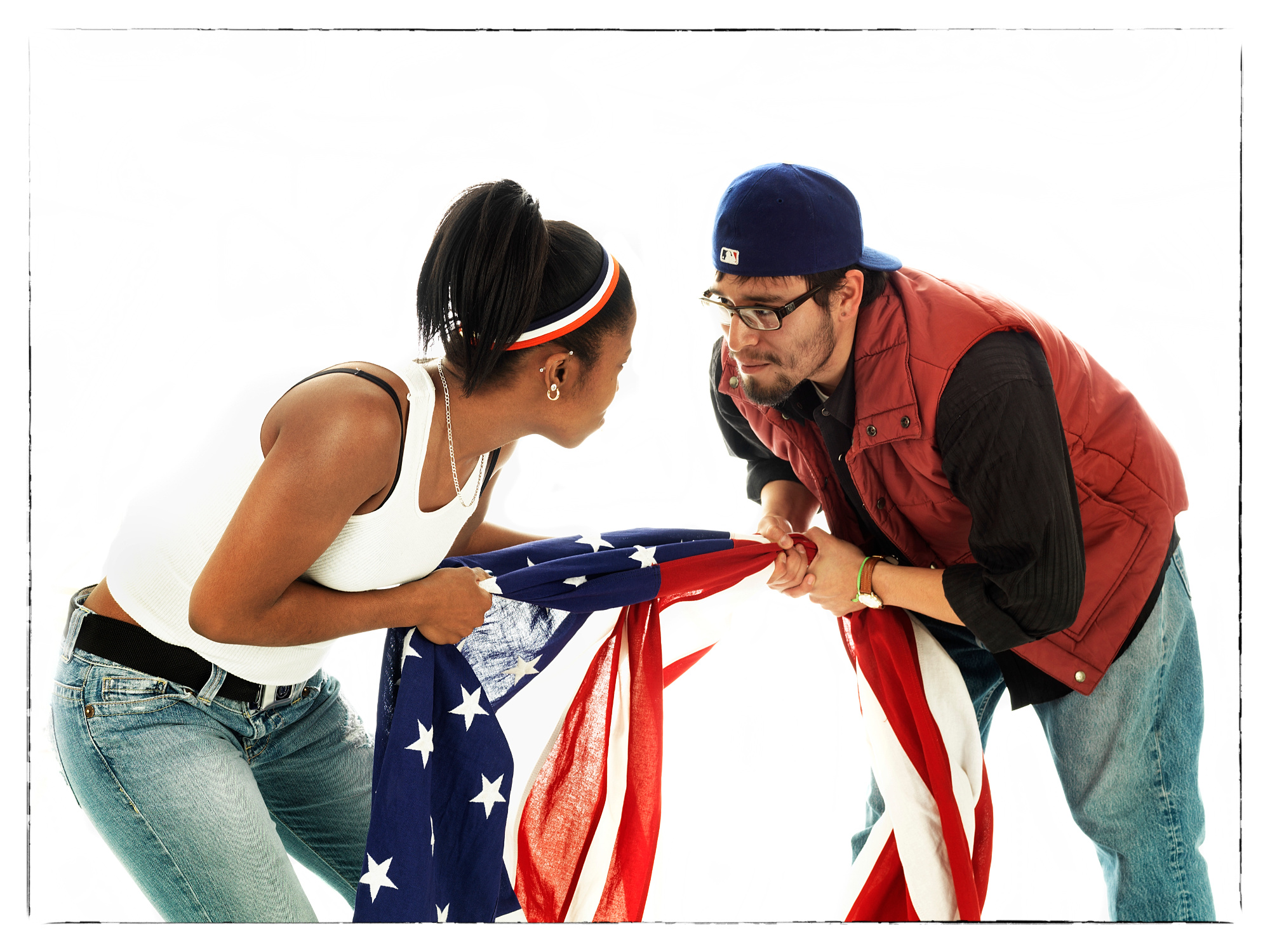 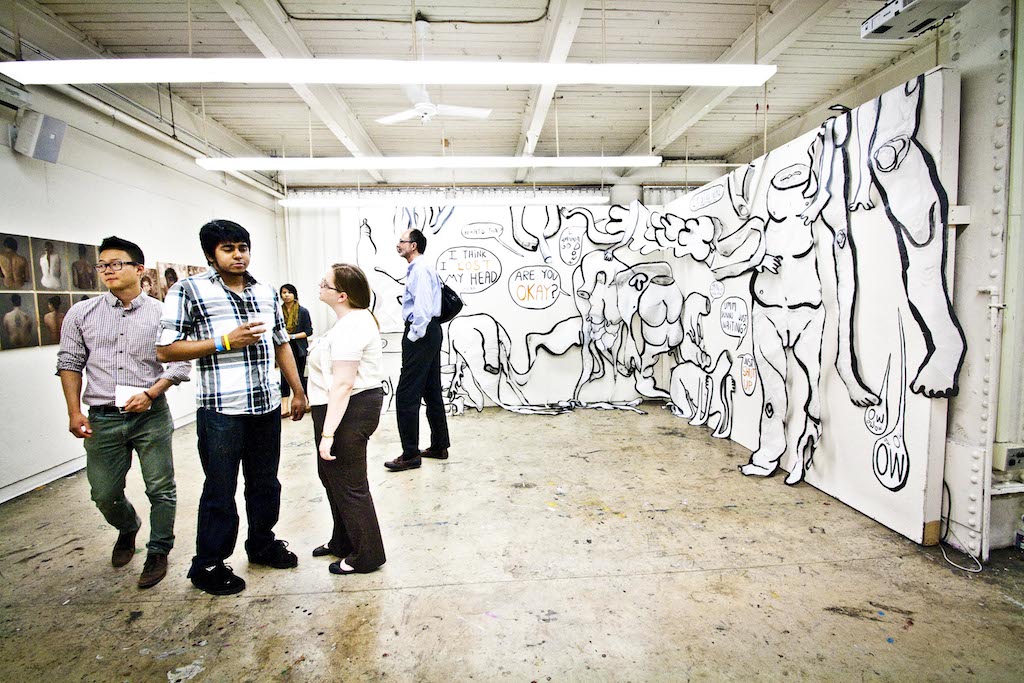 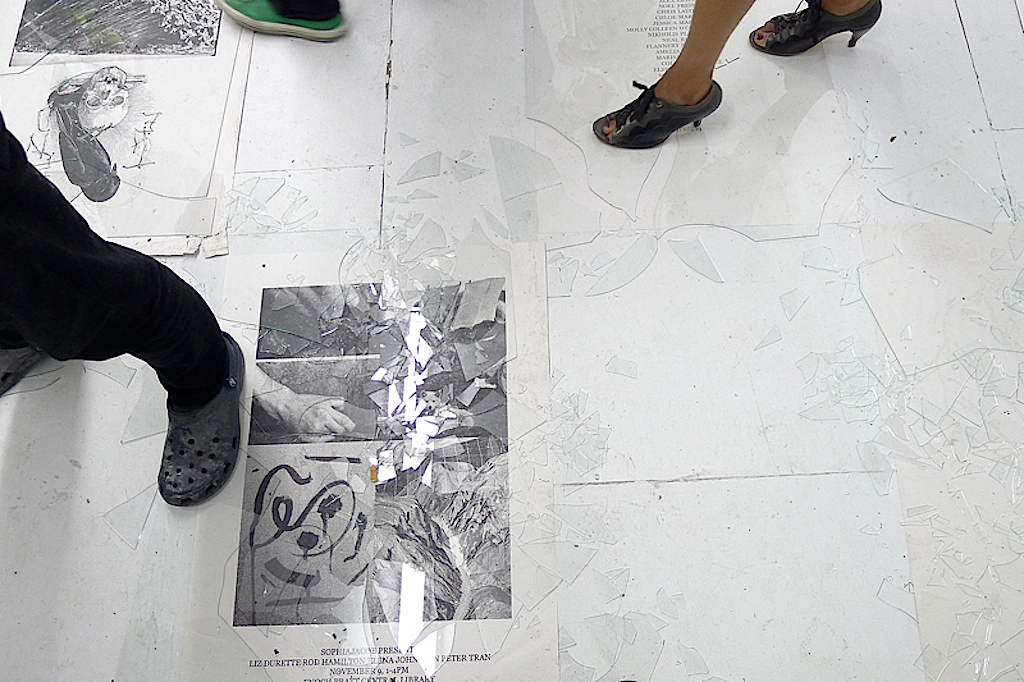 A Review by by Colin Alexander

The term ‘curatorial muscle’ comes up in conversation after viewing exhibitions in sophiajacob’s compact gallery space and, as the space shuts its doors, closing two years of work, it has surfaced with increasing recurrence. It’s a term I return to because of its usefulness in describing several aspects of the same oeuvre. It outlines the ability of the three SJ curators, Steven Riddle, Jordan Bernier, and David Armacost, to put together solid shows. They have managed to curate complex and compelling exhibitions in a way that yields the maximum return from a space that might have been deemed too small with other, more traditional approaches.

They also have shown a ‘brawn’ through the sheer quantity of lectures and multimedia events they scheduled (30+ in just over two years), but the specificity of the term sticks for me in its ability to describe the instance of the curatorial muscle ‘flex,’ when their decision making became loud to the point of drowning out the artists’ work. Alternately both engaging and overbearing, the ‘flex’ is the consistent element that I looked for in each show at sophiajacob. The April 19 exit show was titled The End and operated as a mediated house destruction party and friends gallery event. The space was set up with visual treats littered about the floors and walls while, on the ground, a checkerboard of glass plates lay on top of newsprint posters from their frequent lecture and event series. The viewer was also invited to physically enter the basement, a dank, unfinished cellar that revealed the stone foundation beneath the gallery. In the gallery, a neat stack of pizza boxes (filled with free pizza) obscured a painting on the ground and a large, novelty card at the side of the room said “GOODBYE AND GOOD LUCK.”

As the gallery filled throughout the reception, I found my walking pattern shift from a careful navigation around the glass sheets to a (not so) guilty pleasure in grinding my feet into the shards. The satisfaction of breaking 24″ x 36” panes of glass seemed to trump the quiet pop of packing bubbles and felt similar to a sage burning, or dispelling of lingering spirits, and a few works stood out. Flannery Silva’s fake snow bas relief floor piece depicting a kiss was ghostly sweet and sincere; Jessica Marx’s inclusion of her millinery work with an ornamented grey hat was a beautiful example of ‘slow’ work that held vibrancy in this context; and a purple colored pencil drawing by Nikholis Planck on the back of the basement hatch was great for its unrefined yet dynamic line work. Perhaps the strongest work of all was Elspeth Walker’s ominous and barely visible figure in the farthest, darkest depth of the basement, with twinkling reflector tape eyes over 20 feet away from the closest accessible spot. That said, I don’t need to linger too long on any single work (or even this specific show) since the reason for the party was ultimately focused on sophiajacob’s role in Baltimore’s scene over the past two years as well as its relationship to the community within it. Of the 21 participating artists, at least 10 were presently or formerly board directors of other Baltimore DIY arts spaces (the rest were close friends or previous exhibitors). The show was a fun party, but doesn’t need much description.

Instead, one’s attention becomes focused more on the accomplishments and goals of the space. Beyond the immediate goal of bringing fresh work to Baltimore’s art scene and creating engaging shows, their trajectory consistently aimed towards discourse rather than success. David Armacost backed this conclusion during a visit to his studio last fall. The strongest question that hovered around these shows was, “Where exactly does the role of the curator stand in regard to the gallery space?” And further, “How much power does that give to this individual as either an artist, non-artist, or hybrid character?”

The earlier notes of this attitude can be found on sophiajacob’s website, where exhibition documentation highlights matching palettes between art work and the gallery’s air conditioning control panel (in both Jack Schneider and Nicholas Planck). The bathroom has been used as part of the exhibition space in several openings (including Caitlin Cunningham and the gallery portion of Organized by Elspeth Walker). In the latter of those, distinction between separate artists and their works was non-existent, making for a highly considered space that offered the viewer little to hold onto when outside of the gallery. Though it was most dramatic in that show, the nameless approach is a standard at SJ. Paintings by Liz Durette was probably the prime example of the flex, in which the curators displayed the work of a musician who had not worked previously to sustain a visual arts practice, while offering themselves as artist assistants (which raised issues more fully addressed in Alex Ebstein’s “The Curators Are The Artists Are The Curators”). With this context, the thought of doing a two-person show between romantic partners (Sam Moyer and Eddie Martinez) was refreshingly fun in a way that didn’t overshadow the actual work of the artists.

If a moment of institutional criticism was defined by Michael Asher’s removal of a blue-chip gallery’s office wall, does this use of space and selection act as an inverse to that gesture? By challenging the curatorial process and gallery space with these acts, the SJ curators are able to address larger questions about power in gallery relationships between themselves, the artists, and the audience– namely, who is catering to whom? That curatorial muscle flex felt like an important, playful engagement with those roles at times while more like a vain glance in the mirror at other times.

I believe that the potency of these projects could have made an even larger splash in an arts context where power between these three roles are more established and backed by an industry of dealership and collection. That said, it is testimony to the fertile environment in Baltimore (in both the community and the cheap real estate) that these shows could happen at all. The work put into creatively exploring the potential of the gallery space was most effective because of its conjunction with the lecture series, and affected Baltimore’s arts inertia significantly. The ripples that remain after SJ’s exit will be exciting to survey and hopefully will retain the aspects of community and discourse that were found in this unique body of work and place.

* Author Colin Alexander is an artist, writer, curator, and musician currently living and working in Baltimore, MD. He graduated from the Maryland Institute College of Art in the Spring of 2014.

** Photos by David Armacost for sophiajacob