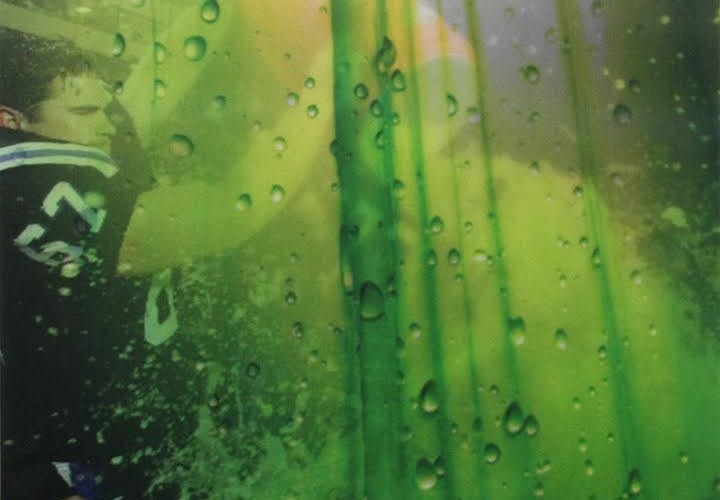 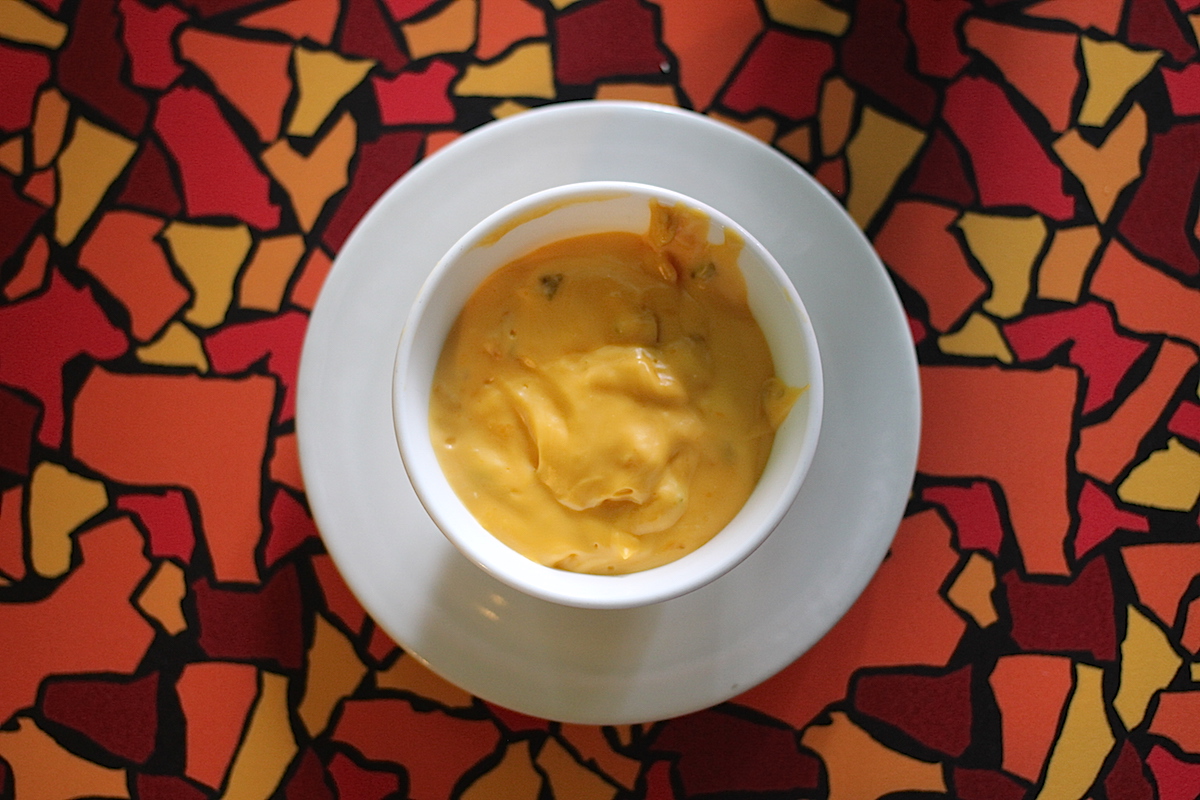 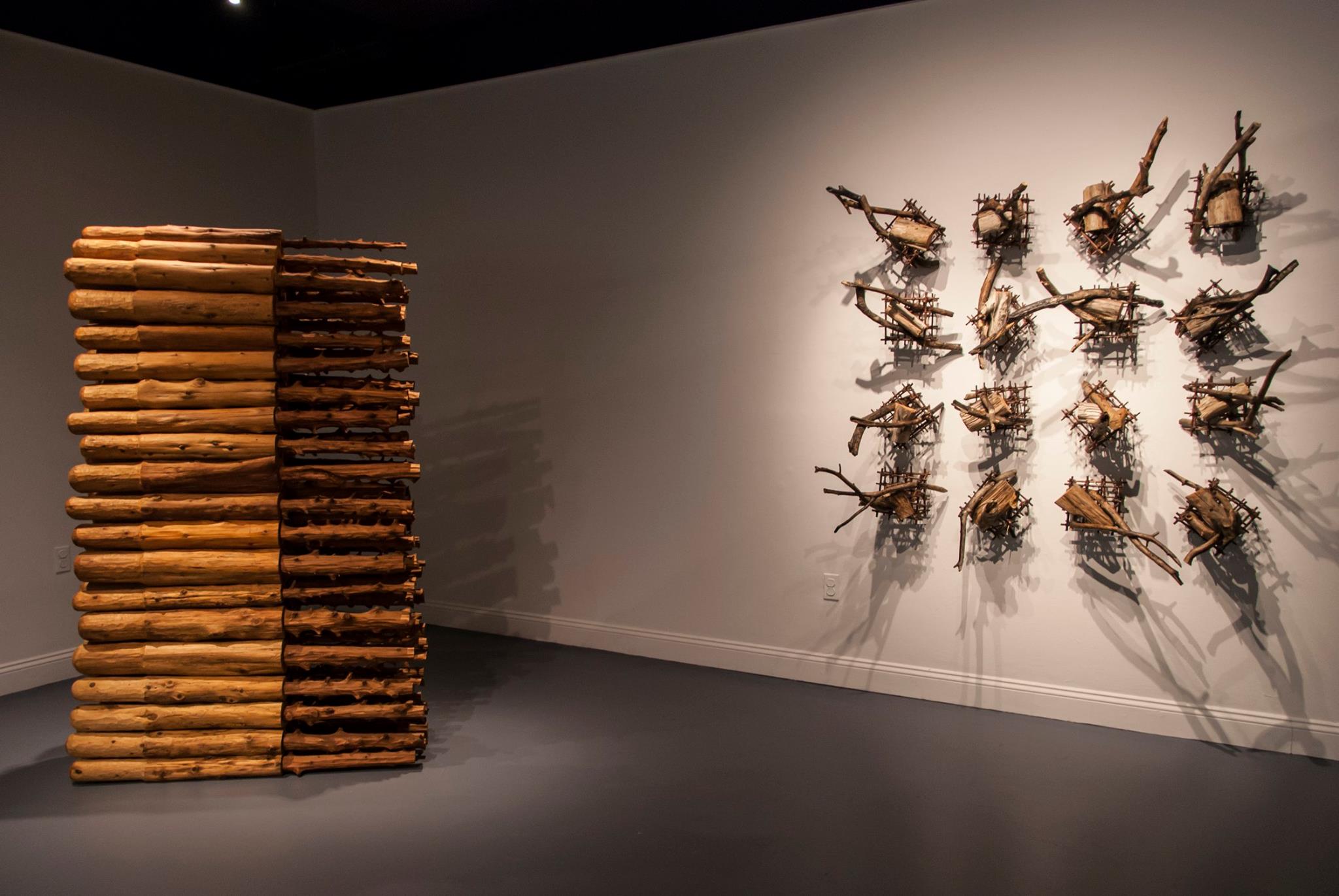 Birds chirp faintly in the distance, and the earthy smell of fresh cut lumber fills the air. You might think you’ve found yourself in a forest, but you may very well be at CCBC Gallery’s latest exhibit, Terra/Form.

Brought together by their use of natural materials, the sculptures and paintings of Terra/Form manifest the passage of time and embody the constant flow and flux of life and decay. The logs, sticks, and leaves found throughout the works in the exhibition are bones and shadows of their original living states, and allude to both the transformative cycle of life and death, and the ability of the artist to transform decayed materials into new and thought provoking forms.

Brent Crothers’s repurposed logs and stumps fill the center floor of the gallery space in Wall, an arrangement of diagonal logs in a structural blockade. While on one side the logs appear to be a solid surface composed of a meticulously stacked grid, the other side reveals diagonal logs rhythmically flowing to the floor. There is a stark contrast between the two surfaces that can only be observed by walking around the structure; one side is fluid, chaotic, and three-dimensional while the other is orderly and flat. Combined, the different viewpoints present a visual separation and contrast between an organic, rhythmic formation and a direct, geometric, simplistic barrier. The contrasting methods of organization in Wall articulate a gap between natural harmonies and arranged geometry, and the presence of the logs flowing from behind the grid is a testament to the complex forces behind seemingly simple natural patterns. Though the grid seems simple and easily comprehended, in reality the complex arrangement of the cascading logs compose it. The progression from the logs to the flat surface also documents the increasing manipulation and transformation at play within the work.

While the minimally treated logs still closely resemble trees, the flat surface they create is obviously artificial and constructed. The trees have been manipulated into a new shape and frozen into the form of the sculpture, but through that process have lost life, which alludes to the elusive power of nature and the impossibility of truly harnessing it.

Taking a more ironic approach to the repurposing of wood, Crothers’s sculpture Old Habits Become Second Nature consists of three shovels hung in a row on the wall. The handle of each is a natural, unpolished splitting branch. The title alludes to a transformation in the identity of the wood; what was once a living organism has been transformed into human tools rather than remaining a naturally occurring tree in a forest. In their frozen placement on the gallery wall, the shovels become objects of analysis and reflection. The shovels are double-edged symbols of power; they may be used to plant, or they may be used to uproot.

The open-ended quality of the work allows viewers to contemplate their own role in the interaction between nature and humanity’s power. The work does not take a dogmatic position; rather, it presents the tools of construction and destruction for the viewer to reflect upon, and uses the notion of the wood’s former state to reveal the manipulation and transformation at play in the interaction between humanity and nature.

Stephanie Garmey’s Woodland Collection considers the relationship between time, nature, and human reflection. The piece is composed of a variety of cross sections of tree trunks, spread across the span of two walls. Most sections are left with their concentric rings exposed, while others are coated with wax graphite drawing transfers. The drawings are done in a detailed, observational style that is similar to a botanical drawing and all depict subject matter dealing with death. The images include a wilted leaf, a dead mouse, an old moth, and an animal skull.

While the drawings of death illustrate the blatant realities of the passage of time, the exposed tree rings in the blank cross sections are subtle reminders of the process through which all organisms progress and develop. The scientific, observational style of the drawings creates an objective, distanced perspective to the harsh reality of death, but the small size, warm neutral color, and intimate lighting lends a nostalgic mood to the piece. Throughout the flow of the repeating cross sections, the ebb and flow of life and death become observable natural processes.

The beautifully intricate drawings of Pamela Rodgers fill the spaces on adjacent walls. Like pages from whimsical forest guidebooks, her compositions use a mix of plant and soil-based pigments with watercolors, pen, and graphite to recreate leaves, flowers, bugs, and abstracted forms. Arranged in an organic, flowing swarms, these elements come together in abstract and surreal compositions that both draw the viewer in with areas of tiny detail and push the viewer back with a larger, overall composition. The fluctuating scale of the details in her works is reminiscent of fractal patterns found in nature, where, particular areas of the structure are identical to the whole when the scale is magnified or minimized.

For this reason, Rogers’s drawings are not merely abstracted for the sake of decoration; rather, they are abstracted to express a deeper organizing structure at work in nature. Though the materials do not embody the passage of time in this case, the yellowed quality of the paper and the storybook illustration style of the drawings create a nostalgic, reflective mood that flows into the sculptures between them. Together, the works in Terra/Form reveal different transformations at play in the relationship between artists and nature. The organic materials in the exhibition carry with them a history of their natural occurrences as trees, leaves, and plants, which allows the works to embody the passage of time and create a nostalgic, reflective atmosphere that challenges viewers to contemplate the natural and human-caused transformations at work in the space around them.

Terra/Form is curated by Sheldon Frantz and features artists Brent Crothers, Stephanie Garmey, Pamela Rogers, and Marcia Wolfson Ray. It is an Artscape Gallery Network show and will be on exhibit at The Galleries at CCBC through September 18, 2015 at 800 S Rolling Rd, Catonsville, Maryland 21228.