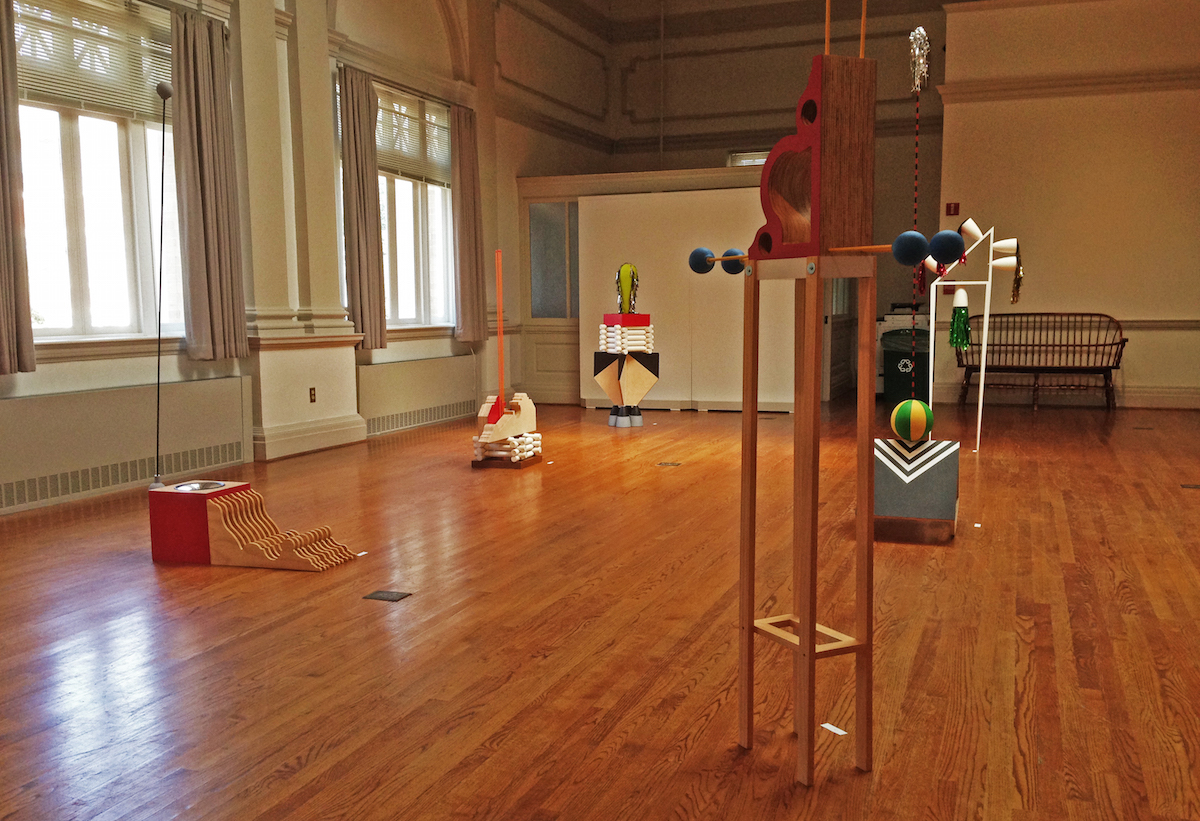 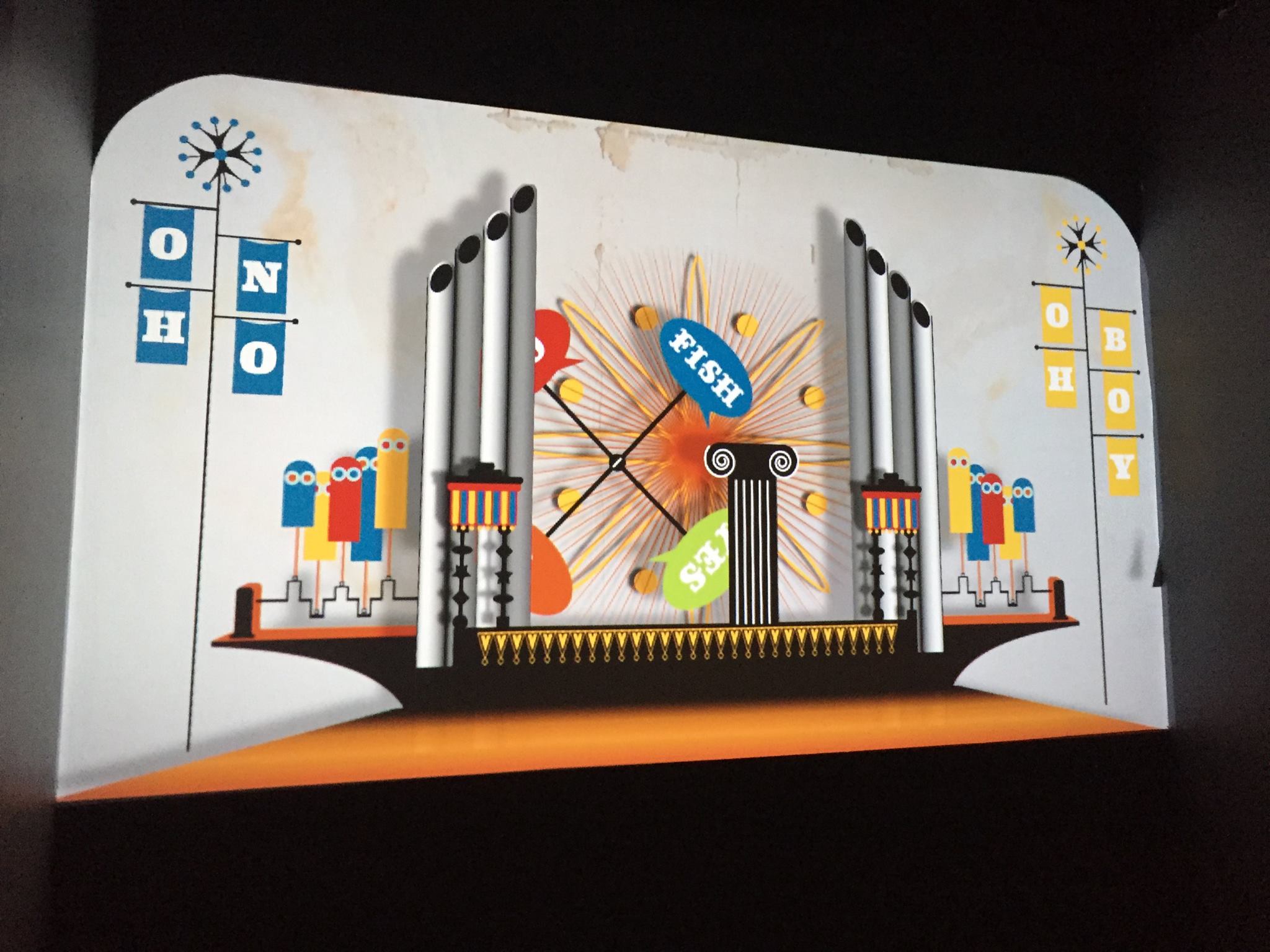 Visual Art
The Art of Spectating

Joseph Shaikewitz on Viscerally Yours at School 33

Upstairs at School 33’s current group exhibition Viscerally Yours, an ominous black box sits on a pedestal and bears a colorful command on its exterior: BEHOLD. The work—part of a new installation by Kelley Bell titled “The Oracle”—invites its viewer to jot down a yes-or-no style question on a piece of paper, “approach the podium with an air of reverence and a mind full of the purest thoughts” (per the instruction card provided), and finally drop the query into the aforementioned box. In the sequence that follows, the spectator shifts from driving participant to ready beholder as a video projection, activated by the submission of the paper, reveals a strangely comical yet doom-laden animation that provides either a straightforward or quizzical response.

The piece teeters between a theatrical extravaganza and what is ultimately a playful representation of the absurdity of the all-knowing. At the same time, it is a work entirely predicated on the act of ‘beholding.’ The spectator not only observes but—if for only a passing moment—venerates the oracle figure that appears on-screen, awaiting its ostensible wisdom. As art historian Maragret Olin has noted, the word ‘behold’ carries explicitly religious connotations, yet has become entangled in the ongoing art historical slant known as spectatorship.

Continuities in the experience of viewing are presumed to connect Bell and the five other exhibiting artists in Viscerally Yours which, per curator Kim Domanski in the press release, claims to highlight works that “provide a special experience for the viewer.” She continues: “these are works that are best enjoyed in person, rewarding the viewer for their participation.” While undoubtedly vague, the title Viscerally Yours contributes a slight amount of additional information, suggesting that the resulting aesthetic encounters belong to and exist for the beholder—hence, that they are possessively and subjectively “yours.”

In the venue’s Main Gallery, two televisions cycle through a series of satirical videos by Paul Shortt; Xerox prints of life-size forest flora by Gary Kachadourian line the interior of a cubic confine; and mixed-media paintings by Erin Curtis animate the gallery walls. In an adjoining gallery, an installation by Fred Scharmen imagines an astronautical fate for a herd of manatees rendered in Mylar balloons. Bell’s “The Oracle” shares the second floor with a series of paintings by John Bohl that carefully merge opticality with the visual rhetoric of printmaking.

During my visit to the galleries, I find it disappointingly gratuitous to decipher how such works relate to one another under the categorical guise of spectatorship. While individually impressive, the pieces and their effects feel diluted by a critically underwhelming and overly broad curatorial classification.

If we hold art to be inherently communicative—a fundamentally visual language—then a consideration of its receptive audiences emerges as a necessary and auspicious subgenre of study. As a result, an active examination of spectatorship has provided an important art historical approach that presupposes this viewer–artwork relationship as fundamental to more comprehensively understanding the latter. Such a methodology has been applied throughout the history of art, with Alois Riegl’s 1902 book The Group Portraiture of Holland serving as an early, seminal example. (Here, the Austrian art historian coins the term “attentiveness” to describe the reciprocal nature of the viewer and the viewed in the visual arts.)

Spectatorship has also served as a critical linchpin in topics ranging from Jacqueline Jung’s scholarship on Gothic cathedral sculptures to Michael Fried’s preliminary notion of Minimalist theatricality to this year’s New Museum triennial Surround Audience—and beyond.

In short, spectatorship is long embedded in the history of art theory and is therefore nothing radically new. As many art historians have proven, it can provide a useful gloss over any number of genres of art. Consequently, I would argue, spectatorship is a topic that must be treated originally and with greater nuance in order to successfully form the basis of an exhibition. While Viscerally Yours effectively assembles a promising group of local artists, its curatorial emphasis on modes of spectatorship falls short in addressing the effects and conditions of beholding with any newfound specificity or from a particularly captivating perspective.

Moreover, the designation of visceral beholding as a shared feature across the six artists’ work ultimately limits the subtleties at play in each individual presentation, such that I initially (and erroneously) feel compelled to evaluate the artwork on display based on how well it fits into a conceptually nebulous thematization. A long-term installation by Jonathan Latiano and Jennifer Strunge, for example, illustrates the effects of this imprecision: the site-specific stairwell intervention appears just as germane, if not more so, than the other works on view. The exhibition theme, put plainly, is simply too all-inclusive of art-making and aesthetic reception in general.

Despite this single, albeit pervasive shortcoming, the exhibition does include several highlights that decidedly merit a closer look. Much to the advantage of the artists on view, the works are spaced strategically throughout School 33, such that they have adequate space to breathe and communicate to the viewer without being placed in feigned dialogue with adjacent pieces and dissonant ideas. I find that, rather than existing as a collective statement on contemporary beholding, the show functions better as a collection of solo-exhibitions.

When framed as such, Viscerally Yours more interestingly expresses the idiosyncrasies of viewing that arise across various artistic approaches and techniques. For example, how might an installation that is conceptually immersive (Scharmen) differ from a spatially immersive experience (Kachadourian)? How do the terms inherent to painted collage (Curtis) invoke an aesthetic takeaway that is distinct from other mediums? The sum of these differences creates an exhibition that is much more telling in terms of current conceptions of spectatorship than one that attempts to cast a wide net and hope for some inkling of unity.

A gallery entirely devoted to the work of John Bohl expertly carries its own. The matte surfaces of each painting in conjunction with the intense optical depth and radiating glow of the images coalesce into a visual experience that is truly enthralling. Bohl’s subject matter ranges from serial patterns to a grid of glass beads and the silhouette of two faces, all of which simultaneously refuse and reinforce the two-dimensionality of the picture plane.

While it is true that the effects of the paintings are more impressive when viewed in-person as the curatorial statement strives to assert, the work also achieves so much more that is likewise of note. Bohl’s formal approach, for instance, is a ready complement to the expanded outlook on opticality and printed matter that artists such as Tauba Auerbach have championed in recent years. At the same time, his insertion of figuration and recognizable symbols into this ongoing narrative adds a familiar and quotidian dimension that is admittedly refreshing.

While I would hesitate to describe the work of Paul Shortt as “visceral,” his 2014 video series entitled “Large Child” nevertheless provides sharp social commentary that is at once droll and poignant. In a collection of shorts from “Large Child: Role Play,” the artist sets himself up for failure as he attempts hackneyed tasks reminiscent of adulthood while armed with equipment and toys intended for children. Brief clips reveal Shortt at a construction site feebly digging at dirt with a playground toy crane; in a kitchen with a child’s cleaning set in an attempt to sweep and mop the floors; and in the process of sawing a 2×4 plank of wood with a plastic, soft-edged craftsman play set.

In this final video, a soundtrack of comical harmonica riffs accentuates Shortt’s moments of defeat and endeavor to soften the desolation of his unlikely feat. However, instead of lightening the mood, the dissonant jingle becomes imbued with tension as Shortt’s temper grows. Before ultimately abandoning the macho task, the artist throws his tools around, strikes his worktable, and exits the screen in a gesture akin to a juvenile temper tantrum. The piece cleverly unpacks the construction of masculinity and reveals a vulnerability towards the societal imposition of gender roles and expectations. Shortt ridicules these pressures and yet, by representing these acts in a way that playfully recalls childhood tropes of passivity (e.g. “boys will be boys”), allows the audience to ignore the dangers of social conditioning—should they so choose.

Bohl and Shortt represent just two of the artists in Viscerally Yours who are heavily engaged with formal and social explorations in their own artistic practices. Perhaps the downfalls of the exhibition’s thematic undergirding epitomizes early concerns with the study of spectatorship—that it downplays content and even historical contexts in favor of the subjectivity of aesthetic experiences—but there is, as numerous art historians and writers have demonstrated, a balance to be achieved.

I do commend School 33’s latest exhibition for calling attention to the role of art as a vehicle for visual expression on the one hand and for spectatorial reception on the other. However, I maintain that a more deliberate effort towards re-framing spectatorship for the public or conversely loosening the reigns on the subject could have considerably improved the exhibition. Viscerally Yours posits itself as an exhibition where one can see and be seen by a diverse grouping of artworks, but in the end the show struggles to provoke a cohesive emotional resonance that I’m eager to claim as ‘mine.’