Theater at the Edge 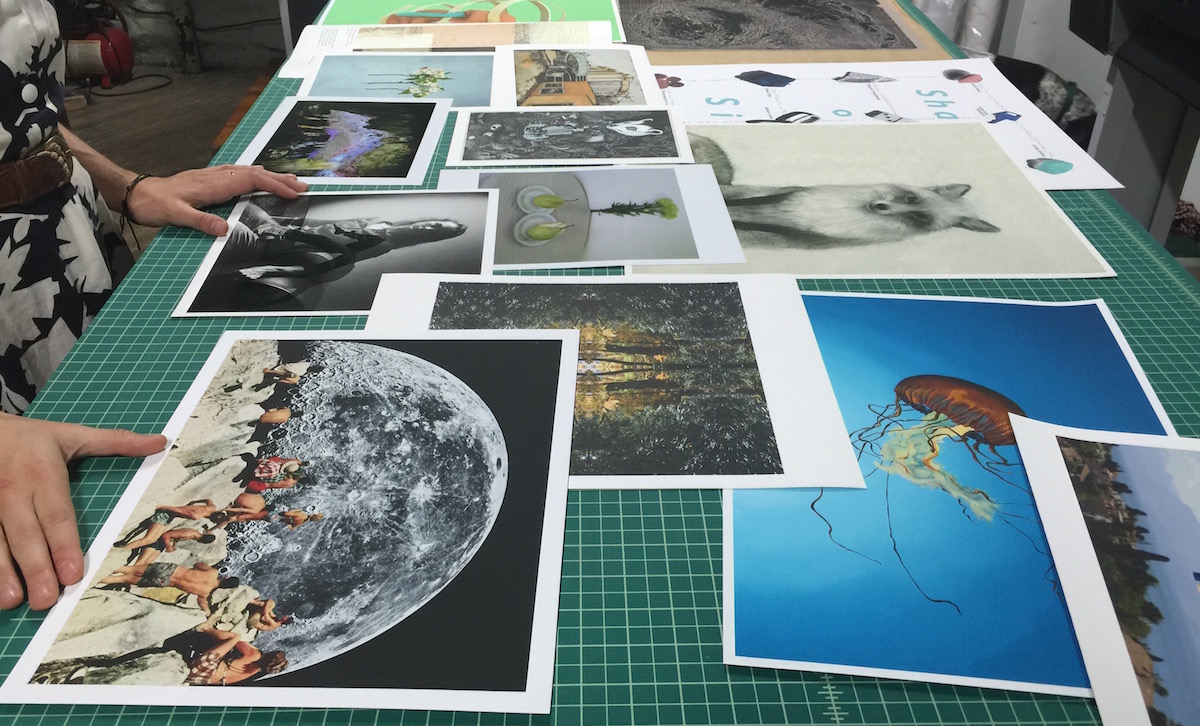 A Small Business in Color 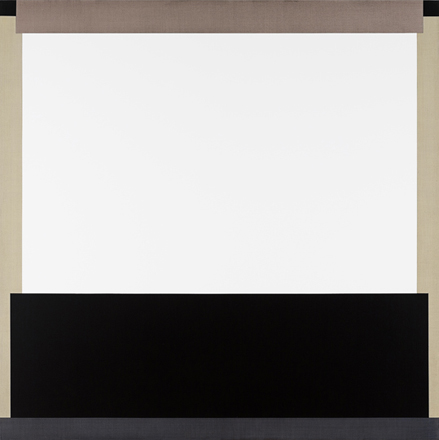 Recent Paintings delivers us into the realm of the theatrical. Timothy App’s procedurally titled Goya Contemporary exhibition of six paintings uses a subdued palette and austere forms to present a stage. There are no actors, no sets, and the lights haven’t been plotted yet, but the setting is absolutely staged. In each of the moderately large canvases, a theatrical space is either revealed or hidden.

First the hidden; “Precipice,” “Elegy,” and “Lux Barrera” all block our vision of a central portal with an intrusion from below, like a truck liftgate rising or a ground-row curtain in the theatre. In “Lux Barrera,” for example, our vision is barred with a white obstacle, a reference to its title’s actual Latin definition as ‘light barrier.’ These three pieces focus on obstruction, keeping the viewer out and away from the center, denying us the satisfactory entry that the rest of the exhibit provides. We don’t necessarily focus on the portal but on the edge, the blue or green or beige side strips, or even the edge of the actual canvas before we get to the wall.

By allowing a smaller wall of color to descend from above, the other three pieces in the exhibit focus on the reveal. “Tuonela,” “Penitencia,” and “Centralia” lower a veil over the proscenium, creating openings for potential. These three are entirely theatrical, a curtain lowering over a void of blue cream or bright white with varying scrims and veils flattened into tormentors, teasers, borders, and legs. They reveal a portal or absence in the center where we are left waiting for the drama to arrive.

“Tuonela” is perhaps the most dynamic of the paintings to come out of this small system. From many angles, the faded blue void dominating the center appears as a gradient. The light scrapes down from the top of the blue and presents an abyss framed between flattened scrims of pale gray and beige. The blue space performs as a portal to the Finnish realm of the dead it is named after and, by engaging in this sense of pictorial framing, it becomes the most resolved piece in the exhibition. “Tuonela” effectively makes you wait for action to unfold.

There is, however, a disconnect between the unrevealing title of the show, Recent Paintings, and the clunky self-cancelling statement of purpose titled Threshold, which is available to the audience and may be a residue from an earlier exhibition of the same name from 2012. As a statement, Threshold assists with some of the content of this Recent Paintings exhibition but also raises more questions.

In fact, I am reminded of Michael Fried’s 1967 essay “Art and Objecthood,” wherein theatricality is enhanced, simple symmetry is preferred, and hollowness reigns as a detriment to minimal work–in both painting and sculpture. Fried accomplishes some of this by linking theatricality to a certain tendency to “stage” works and relate to the viewer anthropomorphically. That App’s statement expresses an open engagement with anthropomorphism, given it’s derisive status the field of hard-edge painting, seems curious. In his essay, Fried directly linked anthropomorphism to the relationship between the viewer and the theatricality of every element involved in a Minimal piece–but to its detriment.

Maybe it is not so strange given the obvious affinities in App’s work towards Jo Baer, Ellsworth Kelly, or early Frederick Hammersley paintings. App’s body of work has always been in some dialog with these traditions of post-painterly abstraction and I can certainly acknowledge that there is an invisible weight that is needed to defend or explain work where little happens. Linking some of the work intentionally with theatricality and anthropomorphism acknowledges Fried’s old argument and embraces the detriment in a quest for syntheses – for some of the works presented. However, the other half of the exhibition deny us the resolution of the proscenium.

The six pieces in Recent Paintings are certainly pictures, though not all successful ones. Their scale asserts their presence, half as theatrical visions in pieces like “Tuonela” and the other half as barriers to pictorial resolution with a work like “Lux Barrera.” The first half reaffirm their pictorial qualities as windows into space, specifically the architectural space of the theatre, so even being flattened, these abstractions are still read as windows. This pictorialism and emphasis on the picture has the potential to undermine the reductive power of abstraction by reaffirming the centuries old trap of painting as window, even at its most reduced state.
​
Even though “Tuonela” is more formally resolved, it ultimately falls into this trap. With the paintings like “Lux Barrera,” where a roadblock or barrier denies entry, the viewer is provided the most interesting effects. Although intrusive, it is the obstacles presented in “Precipice,” “Elegy,” and “Lux Barrera” which get at the greatest potential for this body of work. Even though the pieces with barriers carry with them the burden of being unresolved, that simultaneously gives them viable staying power. Denying the viewer the comfort of recognizable space and the anchor of architecture is the most effective risk for App to take.

Timothy App Recent Paintings will be on exhibit at Goya Contemporary in Baltimore through October 24, 2015.