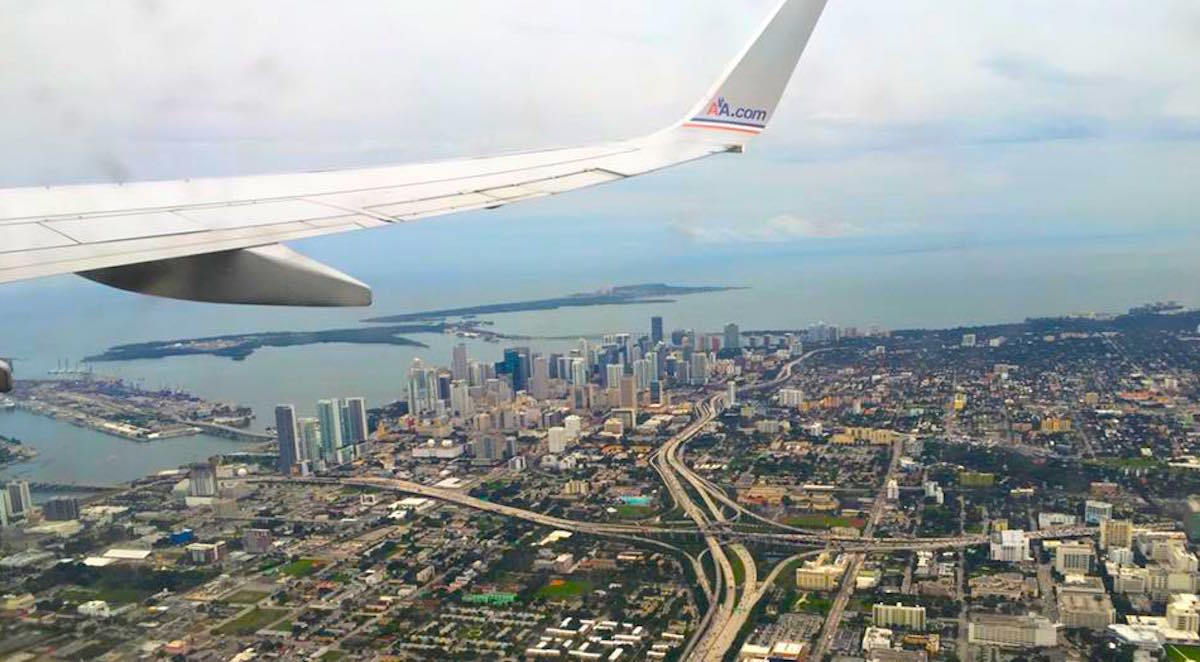 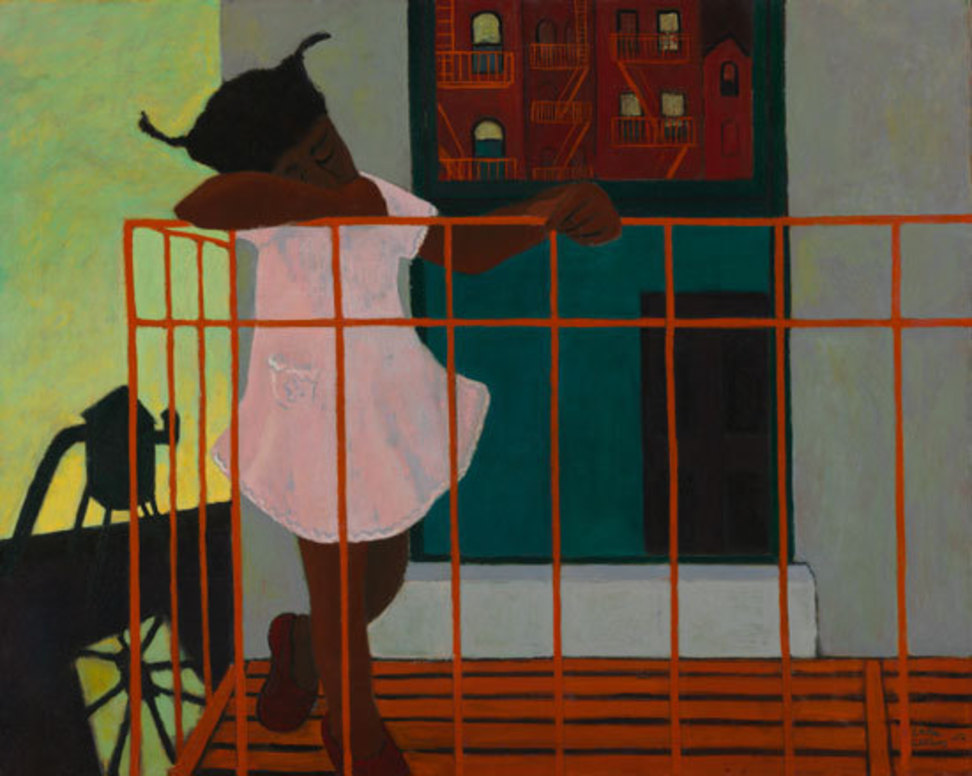 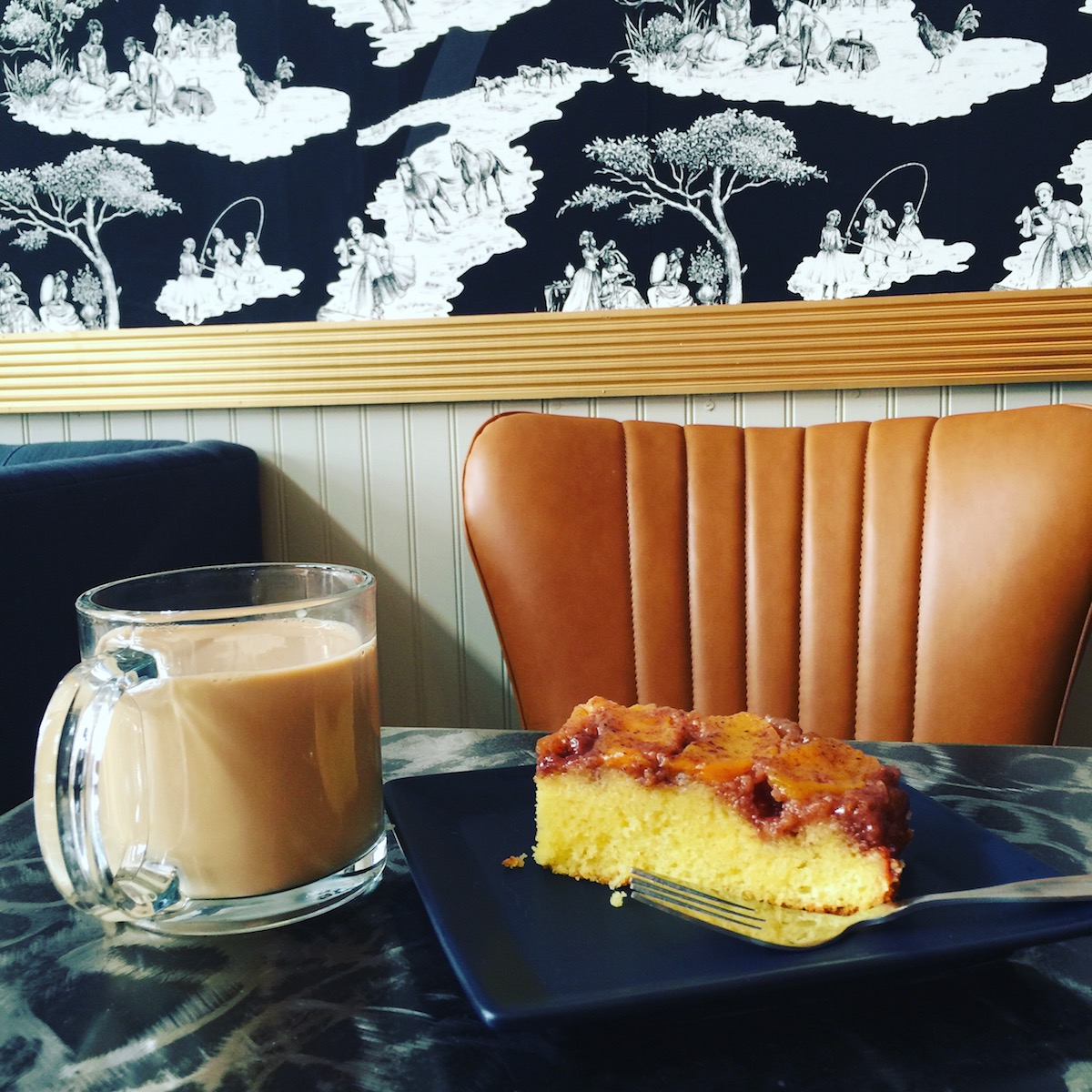 Reservoir Hill’s Dovecote Cafe is a Charming Spot to Caffeinate, Hang Out, and Build Community by Cara Ober

I noticed the wallpaper first. Gorgeous wallpaper. On one wall, a towering framed section of a twist on classic Contemporary French Toile, Harlem Toile de Jouy by Sheila Bridges, depicting African-American subjects shooting hoops and jamming to boomboxes. On the opposing wall, a traditional floral piece looms like a giant piece of pop art. Next to the wallpaper, the cafe features a selection of local art: portraits by Stephen Towns and Jonathan Brickous.

The natural light in this space is beautiful, too. Twin glass porches form the front of Dovecote Cafe in Baltimore’s Reservoir Hill and provide private sunny nooks in which to sip your coffee and work or read quietly. Then you notice the eclectic mix of furniture, which balances stylish plastic acrylic chairs with rustic wooden tables. Every detail in this space seems to have been lovingly curated and this is exactly the way the owners of Dovecote Cafe want it.

Owner Aisha Pew, her partner Cole, their friend and marketing director, Q Ragsdale, and Aisha’s mother, Gilda, began this venture just three months ago, after moving to Baltimore from Oakland, California. When asked, Why Baltimore? Aisha replied, “We came here for a visit and it just felt like home.”

The group had been looking to move back to the East Coast but found New York and Washington, DC, Cole’s hometown, too expensive and gentrified. They drove across country to Baltimore in August, 2015, and found a home to purchase and the cafe on the same day. They now live down the street, on Madison Avenue in Reservoir Hill near the Etruscan Triple Arches, and walk to work each day with Bacon, their small and curly cafe dog.

As I sat in the cafe and sampled the coffee by local roaster Cafe Los Sueños and peach upside-down cake baked by Gilda, it was inspiring to see the impact the group is making on the neighborhood already. On a Monday afternoon, a steady stream of neighbors came by, often in exercise clothing, and all on foot. Aisha remembered many of them by name and those she didn’t know, she made a point to learn. Although the cafe currently offers several coffees, pies, and dessert and plans to offer savory ones as well, hospitality seemed to be the main ingredient on the menu and customers were loving it.

Even the name of the cafe was designed to inspire a communal nesting experience. A Dovecote is a structure for domesticated pigeons or “a harmonious group.”

The cafe offers an inventive visual approach to coffee with a painted key, asking customers “What’s your Javatone?” Rather than specifying how much cream or almond milk you like in your brew, you can point to the a dark, light, or medium tone on the key – and state whether you like it ‘Inkwell’ (dark), ‘Honey Pot (medium), or ‘Tiza'(light). There are five different javatone options.

Aisha Pew grew up in Brooklyn, NY and she attended college at CTNY, CT before heading to UC Berkeley for graduate study in law and social policy. “I expected a radical space that encouraged radical thought, but I didn’t find that at Berkeleey,” admits Pew. “We studied a very traditional cannon and, for those interested in being an academic activist, it was miserable, being stuck between our ideals and the reality of options presented to us.” After grad school, Pew began working in retail, eventually becoming Operations Manager for Bloomingdale’s in Paolo Alto, a job that paid well but was demanding and stressful. 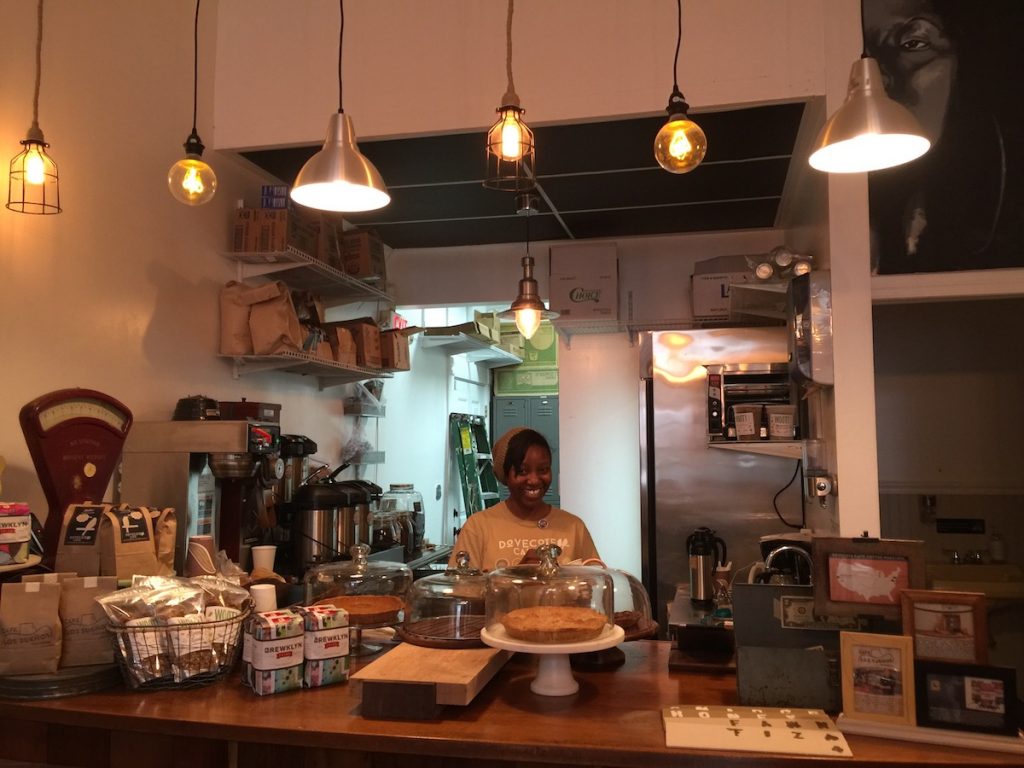 While Pew was living in California, she met her partner, Cole, and soon after her mother joined them. After that, their friend, Q Ragsdale, a performance, film, and video artist moved to Oakland from Dallas, TX to join the blended family Aisha describes as ‘add water & mix.’ After many years of performing in Austin, Houston, Dallas, and other cities, Q’s career has shifted focus when s/he “fell in love with the business side of the industry with help of good mentors along the way.” Q is the marketing director for the cafe and maintains Orange Moon Media, an independent business in creative branding, web design, social media, and marketing.

Gilda Pew, Aisha’s mother, recently completed a Culinary Arts and Hospitality Studies Program at the San Francisco City College and comes from a family of bakers. She had always dreamed of opening up her own cafe. Her Uncle Butch, known affectionately as “the pie man” had been a baker in Baltimore and run Not By Bread Alone, a pie shop in Jamaica Queens, NY. Now the two bake together for the cafe, and the family feels united around common bonds and a collective past.

“It was like the universe said, Here you go,” says Aisha. “This was my mom’s dream and now she and my uncle have joined forces. I was so done with corporate America, all the stress and not seeing my family, and this all feels like it was meant to be.” 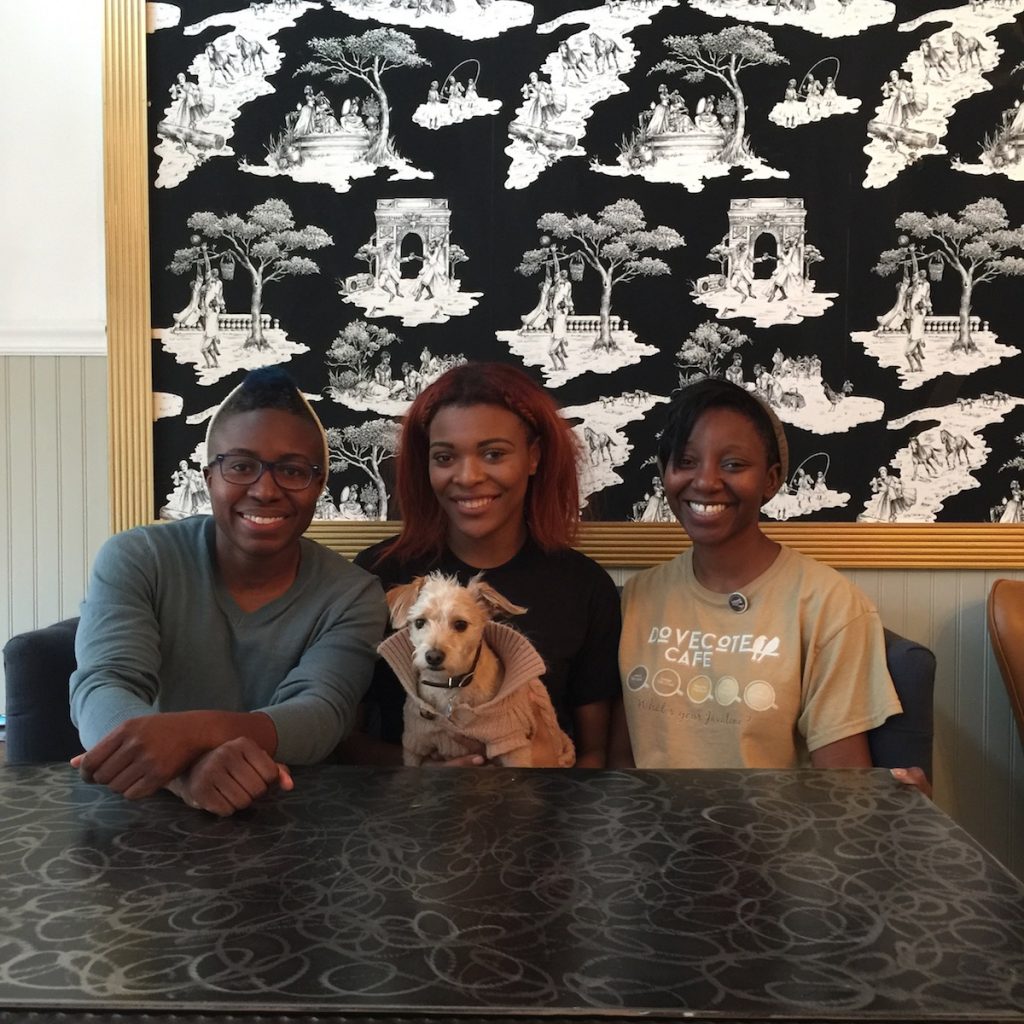 Even their locally roasted coffee was found through kismet. “We meant to open the cafe on October 1, for International Coffee Day, but we weren’t ready,” Aisha laughs. “We were here working, sitting outside the cafe,  and this man popped his head in and told us that he and his wife had looked at renting the place. Then he asked if we were looking for a local roaster.” Carlos, the owner and roaster behind Cafe Los Sueños, lives in the neighborhood with his family, and provided Dovecote a natural partner in providing locally–literally around the corner–roasted coffee.

“We feel so blessed to carry his coffee,” says Aisha as she poured a round for new customers as they arrived. “We are so happy to be here.” 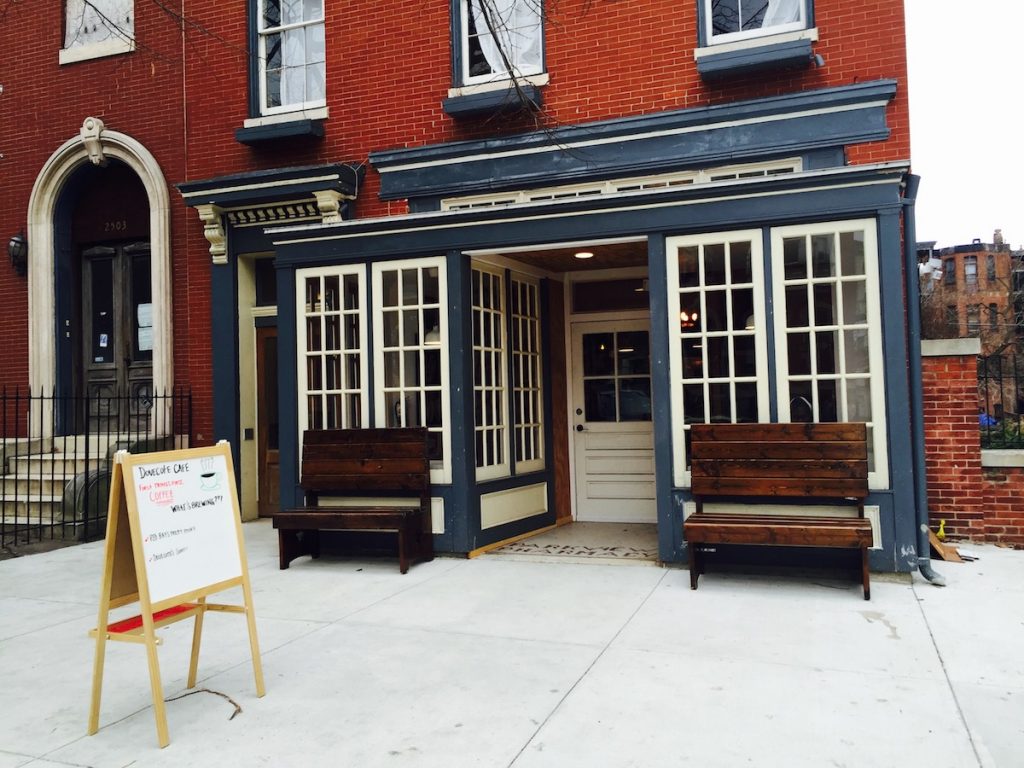 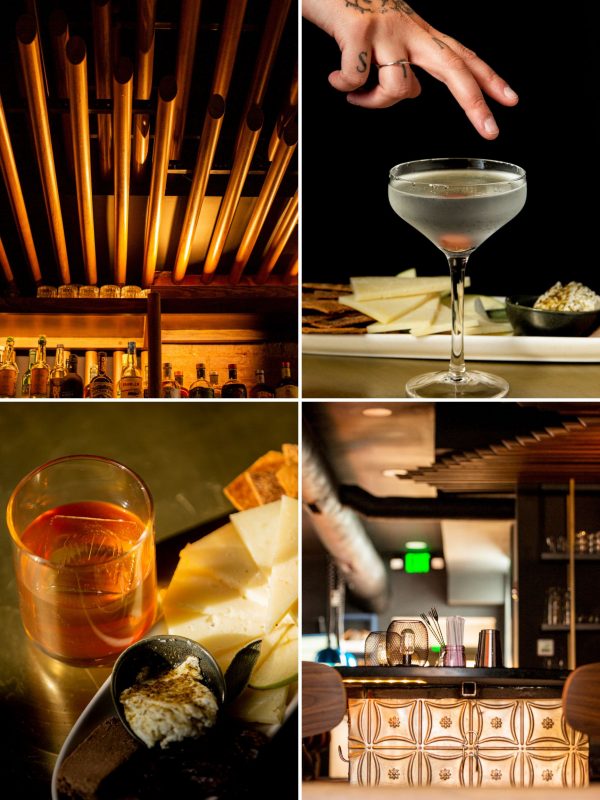 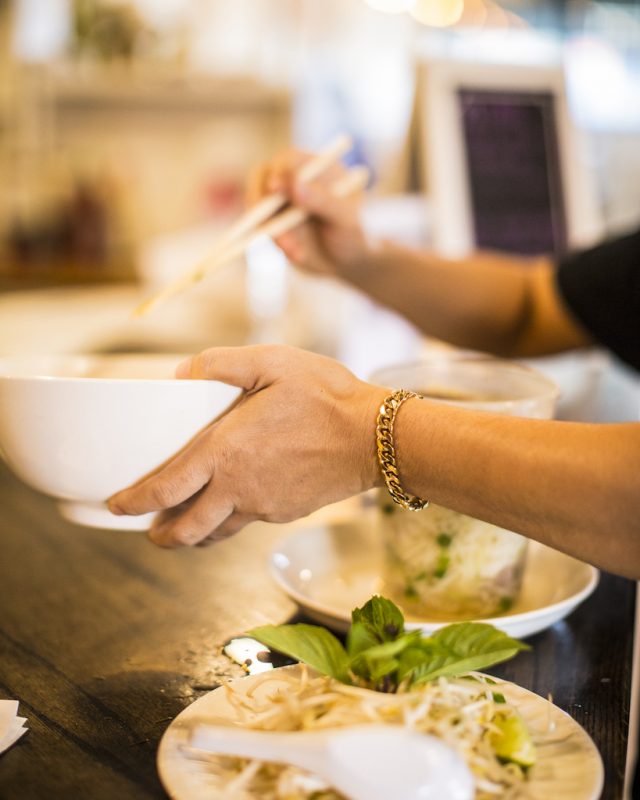 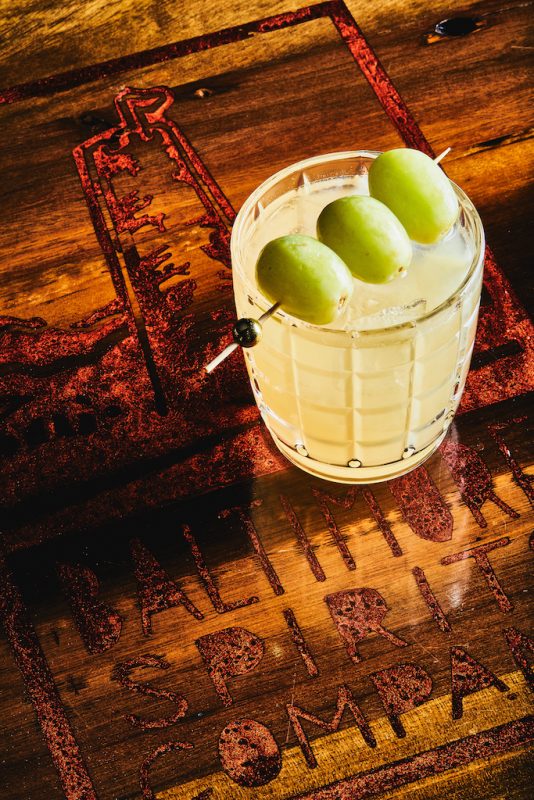