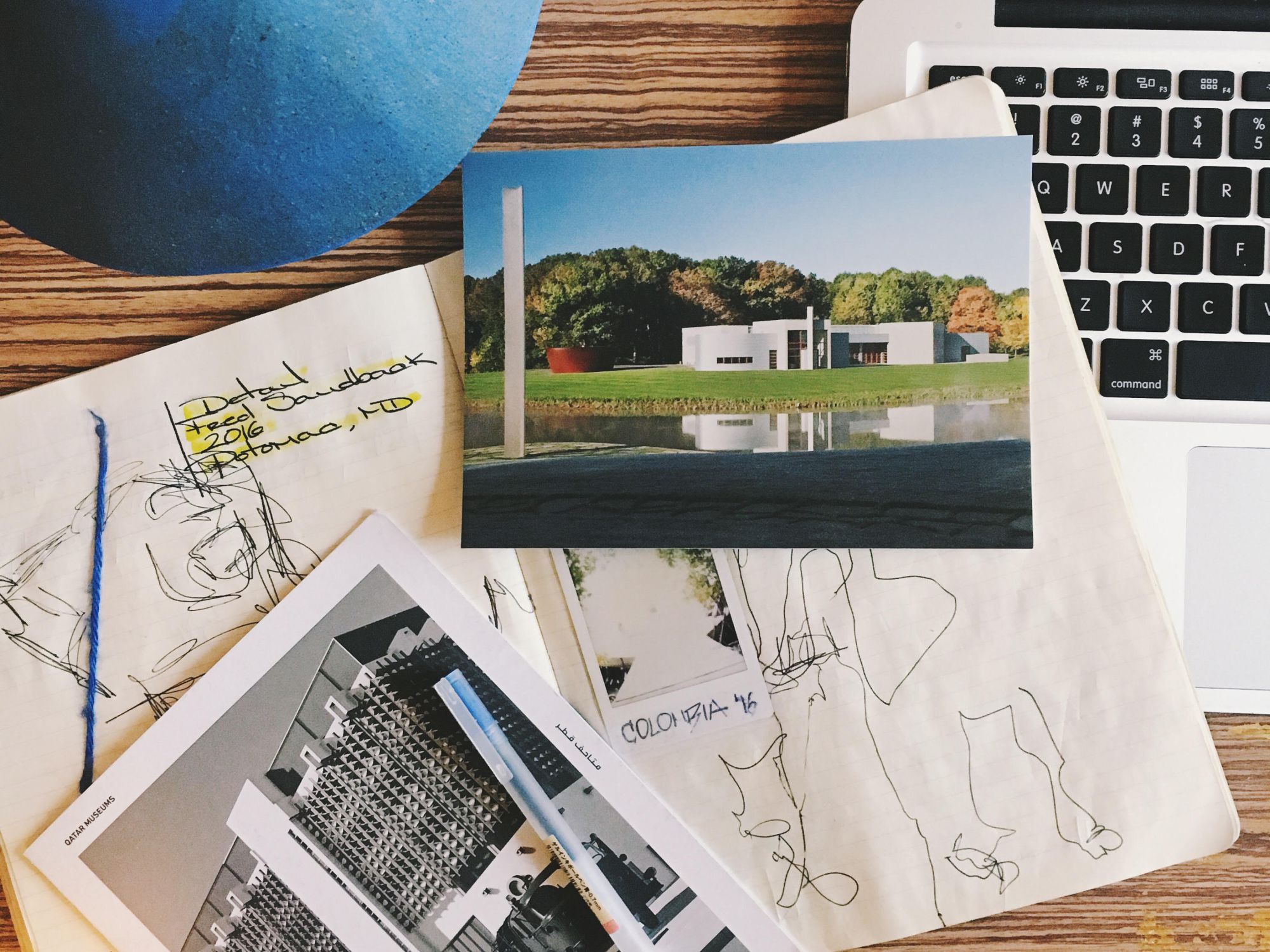 Meditations on the Museum: the Glenstone 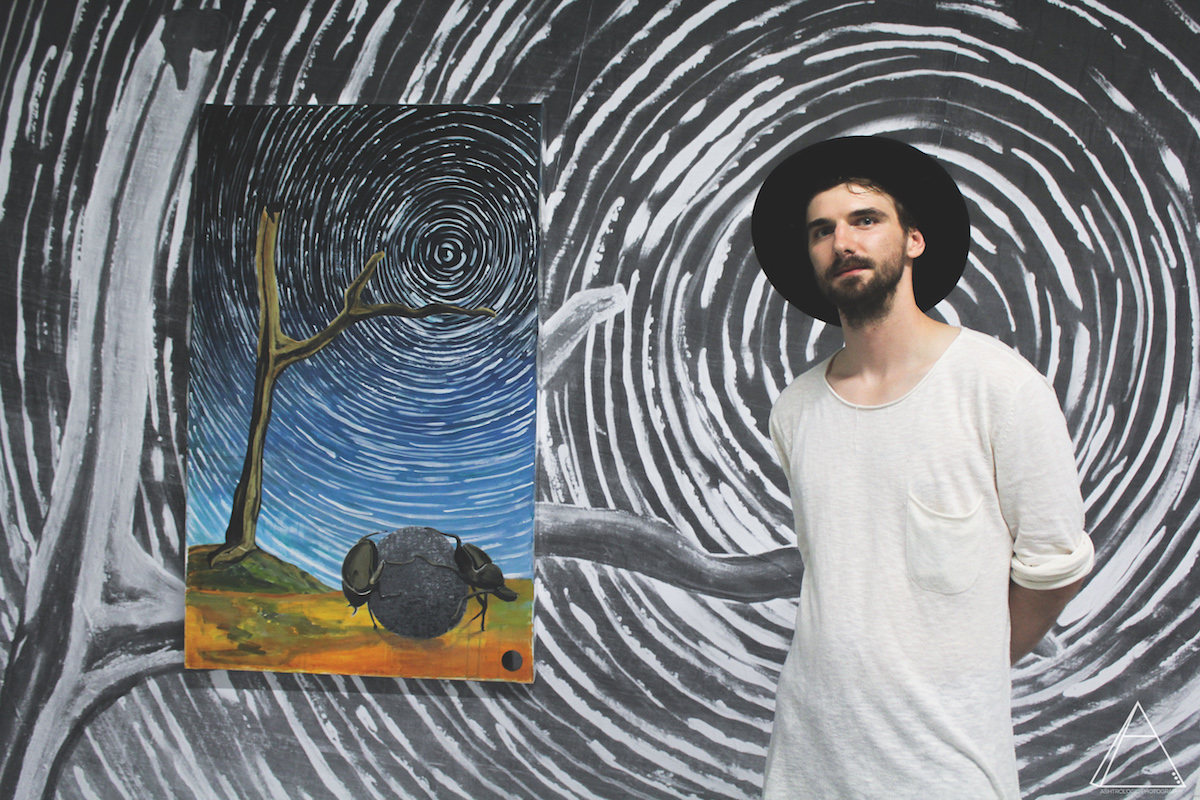 Hasan Elahi’s “Prism v2” devours the front room of the C. Grimaldis Gallery. The 13-panel pigment print is eight feet tall and stretches 24 feet across the wall. When you first enter the gallery it looks like a strange stab at large-scale color-field painting.

Seven vertical panels—spottily colored and running, left to right, from yellow to blue to green to pink to orange to purple—divide a single, larger, and grayscale image, which appears to be a overhead view of some place on earth as seen from above. Consider this larger image a drone’s eye view. Move closer to “Prism v2” and those colored bands reveal themselves to be a giant grid of tinted smaller photos. These photos are banal: toilets, meals, empty spaces inside buildings, architectural facades, beverages, random exteriors. They’re an overload of images, an excess of excess. And how Elahi uses them here points to a giant leap in the visual art part of the ongoing project he’s explored for more than a decade.

In June 2002, Elahi, an interdisciplinary media artist and associate professor in the University of Maryland’s Department of Art, was detained by the FBI at the Detroit Metropolitan Airport when returning to the U.S. from overseas. Although questioned and eventually released, Elahi—a Bangladeshi-born, naturalized American—was subject to months of follow-up questioning. To avoid any further travel problems he’d tell the FBI when and where he was travelling, and he finally decided it would just be easier to track himself. (He narrates a short version of this story in his 2011 TED talk.)

He eventually launched “Tracking Transience” (2003-present), a web project that allows anybody to see exactly where he is at any point in time, and for Elahi to track who is visiting the site and tracking him. This one-man PRISM electronic surveillance program has shaped, informed, and been the raw materials for the wide variety of Elahi’s visual art practice ever since, multi-media works that have appeared in galleries and museums worldwide, which have led to to television appearances and a Sondheim Finalist slot in 2012.

What the work has always lacked, for me at least, is a visual language that matched Elahi’s conceptual chutzpah. Whether it was his pieces in the 2012 Sondheim Finalists exhibition, his Thousand Little Brothers exhibition at Maryland Art Place in 2013, or his work in the 2015 Sondheim Semi-Finalists exhibition, the mirthful and at times subversive intelligence of Elahi’s complex, cutting-edge work overpowers their visual life. Yes, they occupy that bleeding edge of surveillance art that has emerged in this age of invasive governmental and corporate efforts to redefine privacy, but the work was often as cold and impersonal as the technology itself. Elahi’s output looked more thought than felt.

With the body of work included in Datamine—brief pause to applaud the deadpan wit of the title, toying with computational process of finding patterns in monumental amounts of information—Elahi has started exploring an enterprising visual language that plays with and reinforces the intellectual problems with which his work wrestles. The thorny ethical and political crises of the surveillance state remain; what’s new is that Elahi’s isn’t just presenting these issues with ingeniously witty takes on data visualization. Consider “Altitude v3,” a painting-sized color print featuring a grid of nine rows and 14 columns of snapshots of airline meals. If you could make a screen large enough, it looks almost exactly like a Google images search for “airline meals.” That Elahi’s photos—which come from his self-surveillance project and are tied to dates, times, and geotags specific to his movement around the globe—even superficially look like the seemingly random results of an internet search is sarcastic. “Altitude v3” comically shows that for this data set—the set of what people eat on airplanes—the results for one person aren’t that different than the result for all people.

It’s a question that continues in the version of “Stay” that Elahi installs in the back gallery. It includes a full bed that looks like somebody slept in it once, surrounded by 22 pigment prints of unmade beds, photos Elahi has taken of the hotel beds in which he’s slept. Beds, of course, are an example of an ancient human comfort that has appeared in art for a long time. Again, that Elahi’s beds are specific to him but don’t read like they are is eerily comic. But that faint brush with art history suggests that Elahi is thinking about his visual output not only in the context of the surveillance state but the history of image making writ large, and his multiple-channel video piece “Fenester” reveals an awareness that, in hindsight, feels like it might’ve present in his work from the very beginning: the long shadow of Gerhard Richter.

“Fenester” features four wide-screen monitors rotated 90 degrees and mounted in two rows of two, forming a tall, thin tower. For each video feed Elahi has divided the screen into three horizontal bands, and in each section is a blurred image of some such. Squint and you suspect the images come from the same vast pool that makes up the colored bands in “Prism v2”: you can kinda/sorta make out meals, building facades, rooms, etc. At first these images, being on screens, recall a website image taking forever to load because of slow internet connect. Spend a bit more time with the piece, however, and they begin to allude to Richter’s quietly volatile blurred paintings. The path from representation to abstraction—or from the natural to the artificial, and all the stylistic and political baggage that come with such divisions—is a closed loop under Richter’s gaze. His esthetic quest runs parallel to a moral one, or as critic Robert Storr noted in the 2003 book Gerhard Richter: Doubt and Belief in Painting, a painting can “help us to think something that goes beyond this senseless existence. That’s something art can do.”

Richter once said he blurred things in his paintings to “to make everything equally important and equally unimportant.” Elahi updates that act for our senselessly over-militarized, scrutinized, wiretapped, and xenophobic times, and does so gorgeously in the four “Conelrad” pigment print on canvas works in Datamine. The works’ titles, an acronym of “Control of Electromagnetic Radiation,” refers to the United States’ emergency broadcasting system for most of the 1950s. In the event of an incoming missile attack, CONELRAD would’ve told Americans what to do. For the “Conelrad” series, Elahi stretches individual photos taken into a single band and each canvas is made of 365 of these bands. The result is a digital abstraction similar to the Tumblr site Movie Barcode, which stretched every single frame of a movie into a band and arranged them into a single wide-screen image. Again, the superficial resemblance to some existing imagery is part of the richly nuanced point here. How specific and informative can the visual information that surveillance systems and organizations capture if it all starts to look the same?

Of course the NSA and Facebook and whoever else is tracking us isn’t using a single set of data to interpret; it’s a billion of different data points examined in a billion different ways for patterns than supposedly suggest the likelihood of certain types of people doing, wanting, buying, certain things. One of the ideas Elahi has always pushed in his work, and which art history professor Robert Mattison notes in the catalog essay that accompanies this show, is that the information gathered by surveillance has value only if it is exclusive, if only secretive governmental agencies and corporate firms have access to them.

That notion continues to vibrate through Elahi’s visual art, but with the works exhibited in Datamine he also spotlights the alarming subjectivity of the imagery produced by the surveillance apparatus. That imagery, that information about us, can be as non-objective, non-idiomatic, and non-representational as abstract art depending on who is doing the looking. C. Grimaldis Gallery hosts an artist talk on June 11 at 3pm with Hasan Elahi. This event is free and open to the public.