The Art of Engaging with the Senses, A Conversation with Ann Hamilton by Terence Hannum

Ann Hamilton may be best known for transforming Seattle’s Henry Museum into a surreal landscape, complete with two hundred free flying canaries. For the past two decades, the artist has enacted giant, multi-faceted, participatory installations all over the world, representing the US at the Venice Biennale in 1999.

I spent an afternoon talking to the 2013 MacArthur Fellow about her work, the role of the senses, and the importance of intuition before her upcoming lecture at Goucher College on March 30th.

Our conversation started and finished with observations of time. The effect of time is a primary, an often noted element in Hamilton’s work. Her work shifts our perception and makes us aware of other sensations, notably in her giant installation and performance the event of a thread installed at the NY Armory building, which made me curious to understand how she experiences time.

“We don’t have enough time, everyone is racing through their day,” she said. “What is it that, all of a sudden, you pause and you’re open and, in that opening, something that felt like it was disappearing very fast and running through your hands is suddenly full and long?”

She paused and elaborated further. “Perhaps one makes time in one’s work for a quality or an experience of time that you don’t necessarily have in your daily life.”

I agreed, that time is a thing you cannot catch. Then there’s the moment you suddenly have it and it is suddenly very deep, instead of thin and fleeting. Hamilton then flipped the idea of time into a question of spaciousness.

“When I use that word, I say it is not just literally the space you are in but more of the spaciousness of thought, and of imagination, and of experience, and of time,” she said. “So your sense of standing in the presence of a different spaciousness is something that is there in the quality. I like your question because you say we’re encouraged to enter—this question about what it means to enter which is—what does it mean to take a relationship to where you find yourself and what you find yourself in, instead of just passing through? The work of the work is to invite you to do that. It can’t make you do that. It’s not an experience you can consume. It really is about attention.”

Entering a piece by Ann Hamilton is a special experience that often engages many of your senses—from sound to touch, as well as something visual. Hamilton’s work makes me curious about the pathway her ideas take between each medium, from the theatrical collaboration to a print series, or an installation with audience participation.

Hamilton replied that she circles around a set of concerns of issues. “What is touch? What is the reciprocity of touch? What is the experience of reading and language? I think that, for each circumstance, whether that is making a print, doing a big installation that responds to the architecture and social context, or collaborating with someone I am always asking what is the condition that this makes? What is possible? Whether the question is of condition or circumstance.”

“Years ago when I was working with Steve Oliver,” she said. “We were building this tower, which was both an object in the landscape and a space for performances which makes a very particular spatial relationship through this double helical staircase between potential audience and performer. The really wonderful person who I was working with on construction said, ‘We’re not building a tower, we’re making a condition.’”

Getting back to the origin of a project, Hamilton explained that when she starts a project, “It’s very much about trying to feel and sense and describe and research what is there. And then the questions that evokes. And then to work off of that, [to consider] what’s possible is in response to the situation. Obviously the extreme case is what can you do in the Armory. What is it about that as a civic space, a volume that is the size of a city block. What is civic space now? How do people gather?”

To me this illustrated a balance of between interrogation of her concerns and embracing intuition. So I inquired about the incorporation of sound in her work from the event of a thread, to figura to the common sense with the bullroarers.

“Sound is part of what allows you to suspend into being there. With the bullroarers you could feel the air pressure. I think it’s somewhere in Susan Stewart that says, ‘Sound is how we touch at a distance.’”

I inquired specifically about the sense of touch, mainly because it seems to be one of the least utilized in art, since for a lot of audiences touching is the most forbidden when experiencing art. Hamilton not only encourages it in some of her work, but makes work specifically about touch. So what exactly is it about touching?

“I suppose it’s how we know we’re here,” she replied.

In her book block pieces I had always felt there was a sense of touch—or really the ghost of touch—present, with the chopped book spines facing out at the viewer because the memory for me was of flipping through a book. Hamilton called this “the ghost of the hand.”

Which returned us to the concept of intuition where Hamilton added, “I think some of the sound is accidental, you know there would be something in motion and it would have a particular sound quality and later come to understand how crucial that was to your being able to experience it. We’re so dominated by sight, but the felt quality is something that is very hard for us to put a vocabulary around.”

She returned to the sense of sound. “The other thing about sound, there’s the very intentional sound like the vocalist who sang every evening at the event at the Armory, then there’s the sound outside or the sirens, or the glass door, or at the pier at Philadelphia it was like the bridge and the subway—or just the sound a mechanism makes. I became transfixed with the bellringers and that’s the source of the ropes that turns the curtains, then I worked with an engineer to add sound because I realized you have to have that reciprocal sound in relationship to your motion. Finding ways for people to unselfconsciously be inside a project is something I think about. It has to be a place to be. What helps you lose your self-consciousness but be very full of attention?”

We’re so dominated by sight, but the felt quality is something that is very hard for us to put a vocabulary around.

Before Hamilton’s talk this week at Goucher College, she discussed what attendees can expect, as well as the challenges that come prior to giving a talk.

“I’ll set it up through some earlier things but focus on more recent works, The Armory, Philadelphia, and recent photo work and how it is a different form how conceptually it is linked to other work. One of the challenges for me is that the pieces have a layering of elements and complexity that it is exhausting to describe them.”

“For instance, at the Armory we opened up the delivery door so that it was transparent. And in the history of the Armory there had never been a view in from the street. All of a sudden that small gesture, which happened at the last moment, made the whole piece work, because it gave this spine of light. I don’t think you would have said that’s what makes the piece work, but I could see it wasn’t working until that happened. Where the work orients to light is something that I’ve learned to even see and understand how really important it is. Now when I go to do work I’m like, ‘Where’s the light?’ But it’s intuitive, we turn towards light, we’re like plants.”

It’s intuitive, we turn towards light, we’re like plants.

A discovery so simple as opening a door seems in hindsight, obvious. Curious, I ask her how often a simple gesture bridges what’s missing in an unfinished piece, and how often she asks herself questions like, “Why didn’t I just open the doors?”

To which she answered, “It’s always like that. I think what it is is that basically your body is really smart, but it takes your brain so much longer to catch up.“ 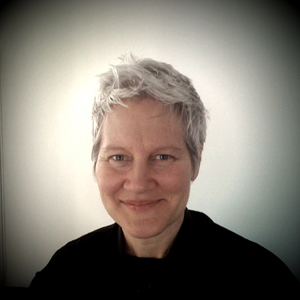 Catch Ann Hamilton’s talk at Goucher on Thursday, March 30 where she’ll discuss her artistic process and the stories that her artwork tells. Hamilton is visiting Goucher as a part of the Center for Art & Media 2017 Unobskey Visiting Artist Series. Free and open to the public.