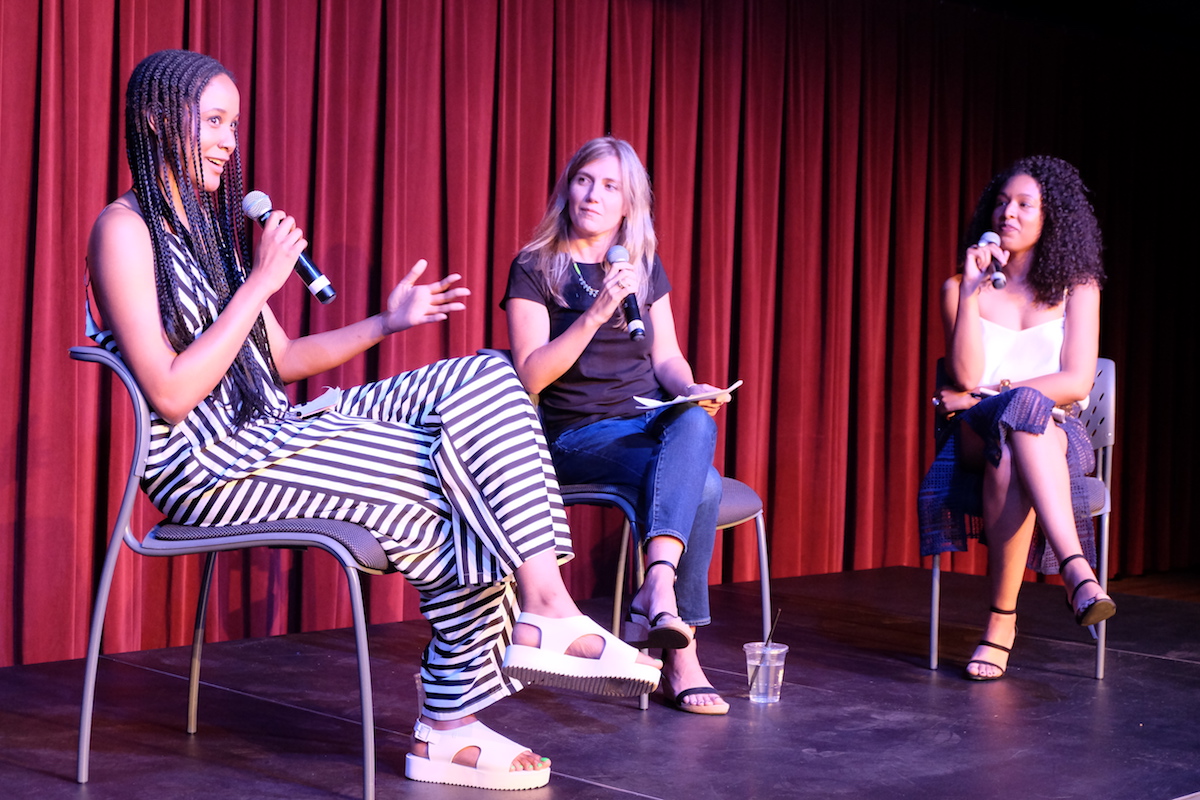 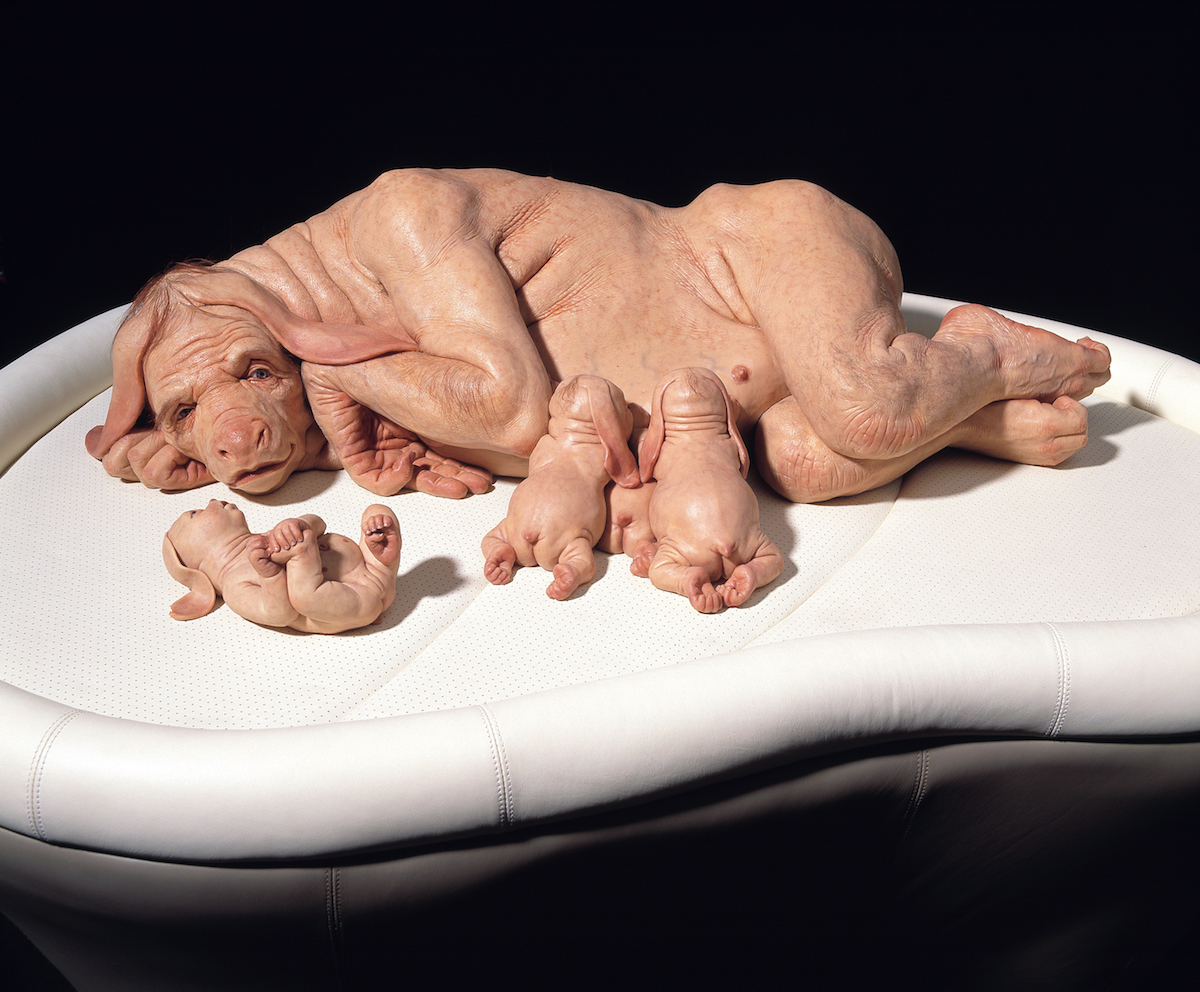 Women Present Life, Love, and Horror in REVIVAL at the National Museum of Women in the Arts by Brendan L. Smith

In a compelling exhibition titled REVIVAL at the National Museum of Women in the Arts, sixteen contemporary female artists explore life, love, and horror in work that transcends the theme of the exhibition.

The collected artwork, including sculpture, photography, and video, veers from the beautiful to the grotesque, from biting commentary to subtle nuance, stirring emotions in viewers that ultimately are of their own making. As a whole, the work poses more questions than answers, which is what art is all about. 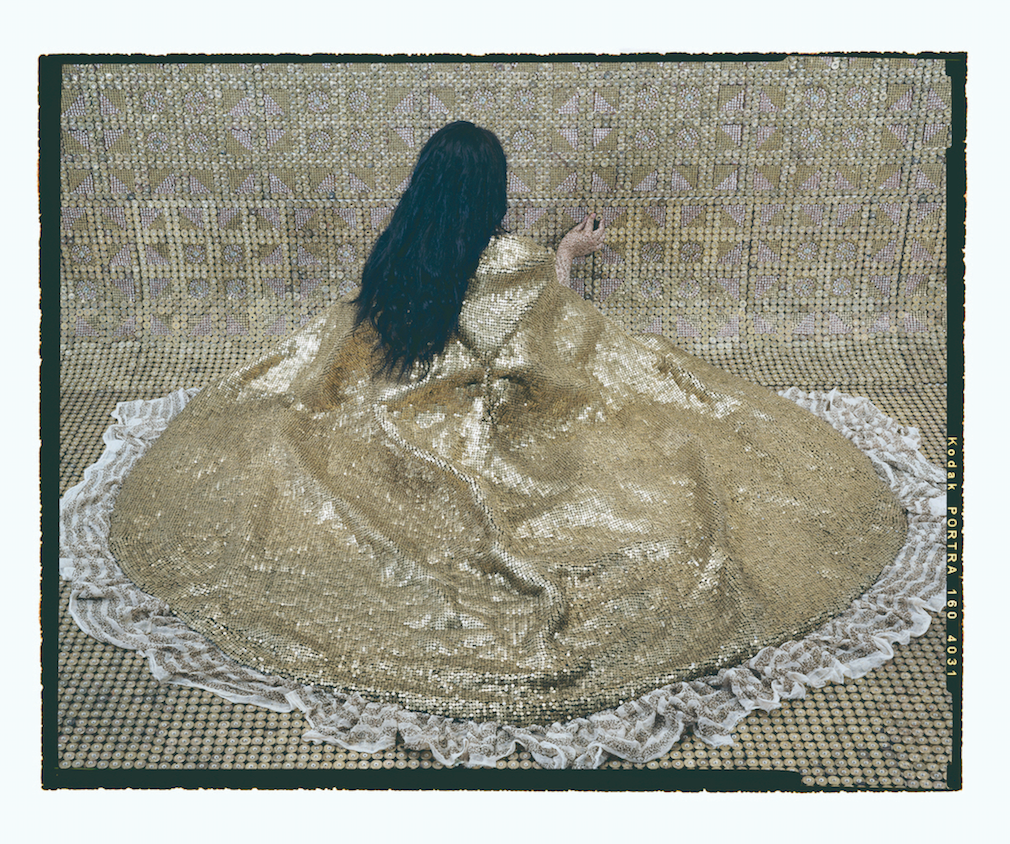 The exhibition is meant to conjure an old-fashioned tent revival, hence its title, explained Kathryn Wat, the museum’s chief curator.

“Similar to a preacher, we use intensity to get us to a level of understanding about love and power and anxiety,” she said at a press preview. But in those religious rituals of bygone days, tent revivals reveled in undying faith and fiery fervor where a sweating crowd of true believers was swept up in a religious spectacle. Although passionate, this exhibition has only a tenuous connection to those concepts; it falls short of the ecstasy of the redeemed tinged with fear of the eternal hellfire awaiting the wicked, but still offers challenging and emotive works.

Rather than a quasi-religious spectacle, a more apt categorization of REVIVAL might be the revival of interest in female contemporary artists who have largely been ignored for decades.

While some work explores wider themes of life and death, only a few pieces embrace spectacle. A more apt categorization might be the revival of interest in female contemporary artists who have largely been ignored for decades, as the Guerrilla Girls have illustrated through their ongoing critique of the male-dominated domain of most art museum exhibitions. The National Museum of Women in the Arts, which is celebrating its 30th anniversary with a greater focus on contemporary female artists, obviously doesn’t suffer from that sexist problem, but it can still be difficult to unite the diverse work of many female artists under one overarching theme.

The exhibition is definitely worth seeing regardless of the theme, with the work loosely divided into depictions of women, children, or animals. Most of the artists have several works on display in separate areas, providing much-needed space for contemplation rather than competition. 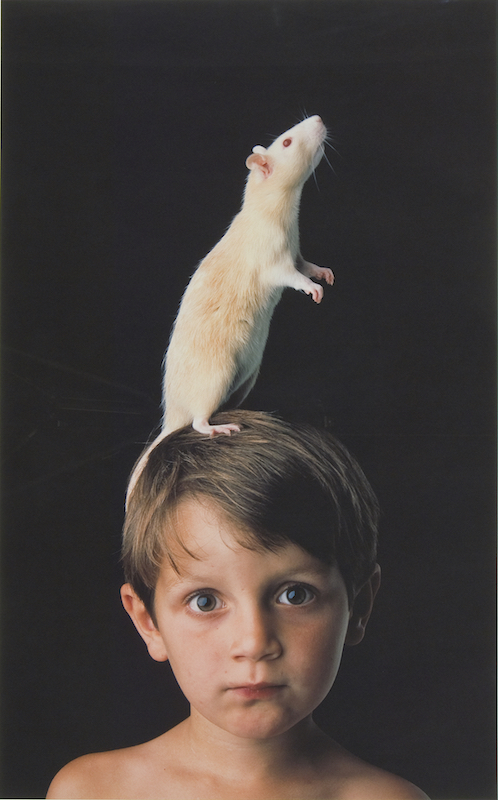 At the two entrances, visitors immediately see an unnerving sculpture or a controversial video projection that trigger the most shock value, most likely not by coincidence. In the video titled When I Grow Up I Want to Be a Cooker, London-based artist Maria Marshall’s two-year-old son stares nonchalantly ahead while blowing perfect smoke rings from a lit cigarette. The video, whose title is derived from a quote by her son, immediately triggers a visceral outrage, especially if you’re a parent of young kids like myself, about how this irresponsible artist could endanger her own child in the name of art. But the work is smoke and mirrors with some digital trickery used to create the smoke.

In the wall text, Marshall said she was “projecting on him a future as an addict” and asking, “How does a mother calm herself and learn to let her children just be?”

For convoluted reasons that aren’t worth explaining, Marshall was swept up in the insane Pizzagate conspiracy that claimed the popular Comet Ping Pong pizzeria in Washington, D.C., was also the base for a child sex ring, leading to an unhinged gunman storming the restaurant although thankfully no one was injured. Marshall has said her work is about “fantasy and fabrication” and “not about being sensational,” which is somewhat disingenuous. On her website, she doesn’t reveal the boy in the video is her son, and she falsely claims that he “parts his lips inhaling the smoke deeply into his lungs.”

In her large chromogenic prints, Deborah Paauwe offers a subtler examination of adolescence in sensual images of young women whose faces are hidden or seen only in profile, creating uncertain story lines. In Tangled Whisper, the torso of a nude woman with auburn hair appears locked in a dance or tender embrace with another young woman wearing a white brocaded dress.

In Tender Locks, their backs are shown while they tug gently on each other’s hair. It’s difficult to gauge the age of the young women, and they seem both innocent and titillating at the same time. Are they childhood friends or budding lovers? What does it say about the viewer if you pick one over the other? 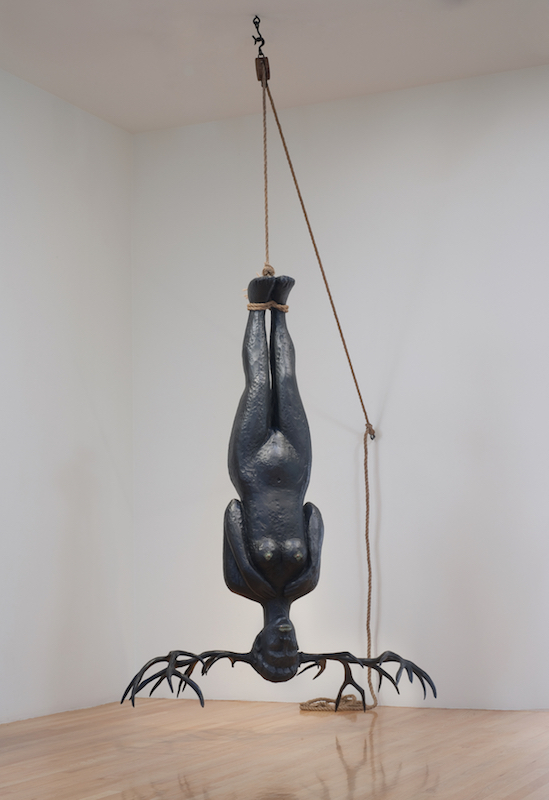 Alison Saar’s sculptures which fill an entire gallery offer the most pointed commentary on race and gender in the exhibition. En Pointe is an imposing bronze sculpture of a nude woman suspended upside down by a rope wrapped around her ankles which is attached to the ceiling with a pulley. The immediate electric impulse it triggers is the long, bloody history of lynchings of innocent African Americans in the South in yet another sordid chapter in America’s long tragic history of racism, rage, and dehumanization.

Saar, who calls these sculptures “inverted lynchings,” has said being raised by a black mother (famed artist Betye Saar) and white father influenced her feelings of “never belonging in either world, always being considered some sort of other.” But that uneasy duality also extends to “seeing myself as the civilized self and the uncivilized self, the wild self and the controlled, contained, well-behaved self.”

Saar, who calls these sculptures “inverted lynchings,” has said being raised by a black mother (famed artist Betye Saar) and white father influenced her feelings of “never belonging in either world, always being considered some sort of other.”

En Pointe, a ballet term for on the tips of the toes, is more difficult to read on closer inspection. The woman’s serene expression and folded arms belie her brutal treatment, and large antlers protruding from her head evoke a mythical beast or a merging of the masculine and feminine.

In Saar’s recently created sculpture called Barreness, a bronze nude woman sits on two trunks while a thicket of thorny branches tangles upward from her belly button. For centuries, a woman’s only function was as wife and mother. Despite their lofty station, even queens could be discarded or executed if they couldn’t bear sons to carry on the royal line. The title of the sculpture, which sits upon her own baggage, plays on the noble title of baroness as well as the inability to bear children in that enduring history of body politics. 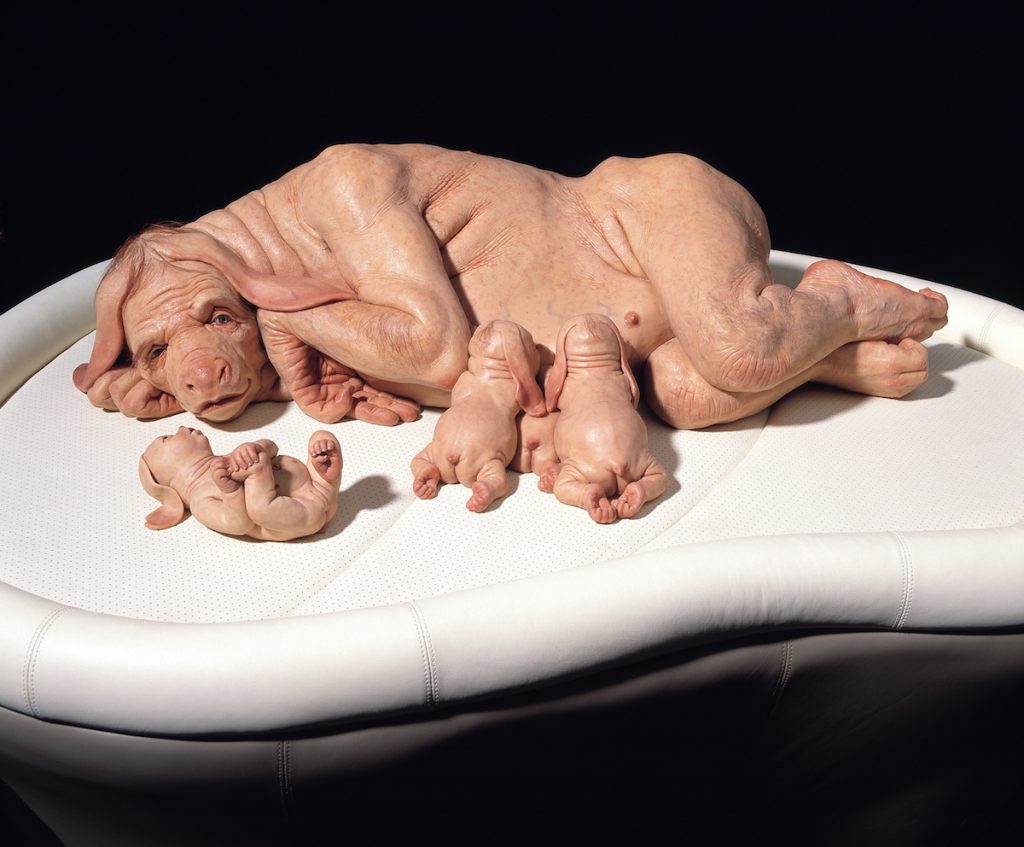 At one entrance to the exhibition, Patricia Piccinini’s eminently creepy silicone and fiberglass sculpture titled The Young Family stirs an intense dread that flirts with outright horror. A mother pig has been transmogrified with human-like hands and legs and is covered with real tufts of human hair. Three piglets nurse from her teats while a fourth has been abandoned, cast aside while struggling on its back alone.

The mother creature’s eerie expression conveys both a sadness and fragility about an uncertain future both for herself and her offspring. Piccinini has said the work was inspired by our futuristic and ethically problematic attempts to genetically engineer human organs in animals to be harvested and transplanted, turning animals into genetic freaks that exist only to provide replacement parts for humans.

The sculpture, which was shown in 2003 at the Venice Biennale when Piccinini represented Australia, is so unnerving and lifelike that Internet rumors claimed it was some new mutant species. The conspiracy-busting website Snopes even investigated the rumor to debunk it. 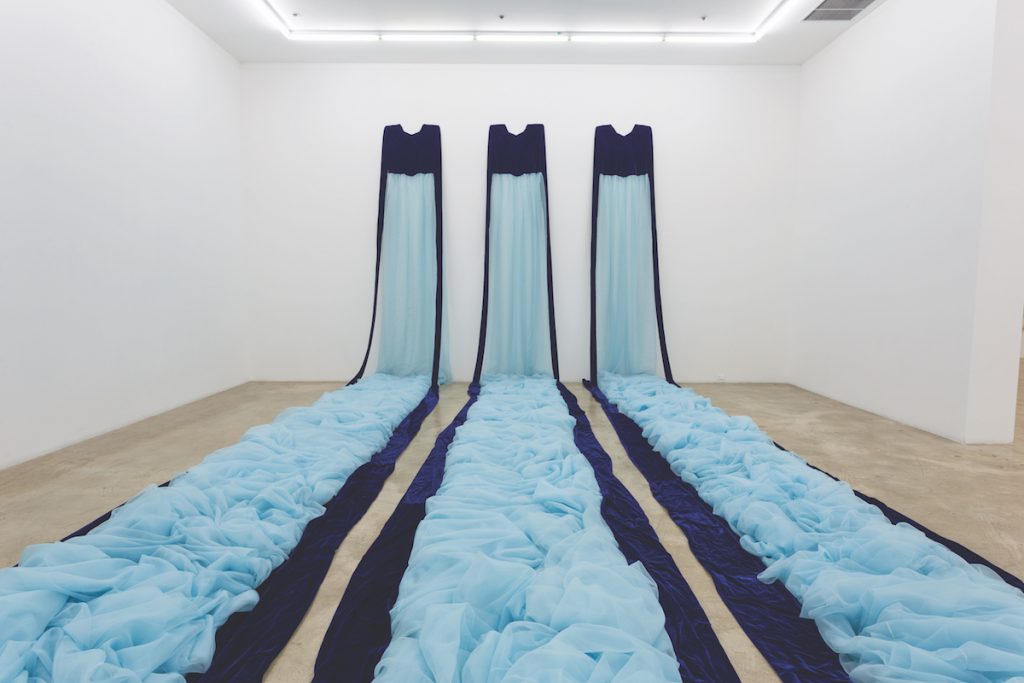 In the largest installation in the exhibition, Beverly Semmes’s Blue Gowns fills an entire gallery, with flowing sections of baby-blue chiffon lined with black crushed velvet descending from the wall and cascading across the floor like three separate waterfalls. While the materials and title obviously reference wedding or ball gowns, Semmes, a D.C. native now living in New York, has said the work isn’t a feminist critique of the constricting layers that women adorn but an examination of the interplay between the female body and the earth’s undulating landscape that grounds all of us.

Three of Louise Bourgeois’s sculptures are ineffectively scattered around the exhibition, including one of her small signature black bronze spider sculptures. While it seems ominous and foreboding, Bourgeois has always claimed that the spider reminds her of her mother, a weaver, and her strength and protection.

Although the placement of her work could have been better, Bourgeois functions as the ultimate symbol of revival for a female artist who persevered for decades before her work received the recognition it deserves.

REVIVAL will be on view through Sept. 10 at the National Museum of Women in the Arts at 1250 New York Avenue NW in Washington, D.C.