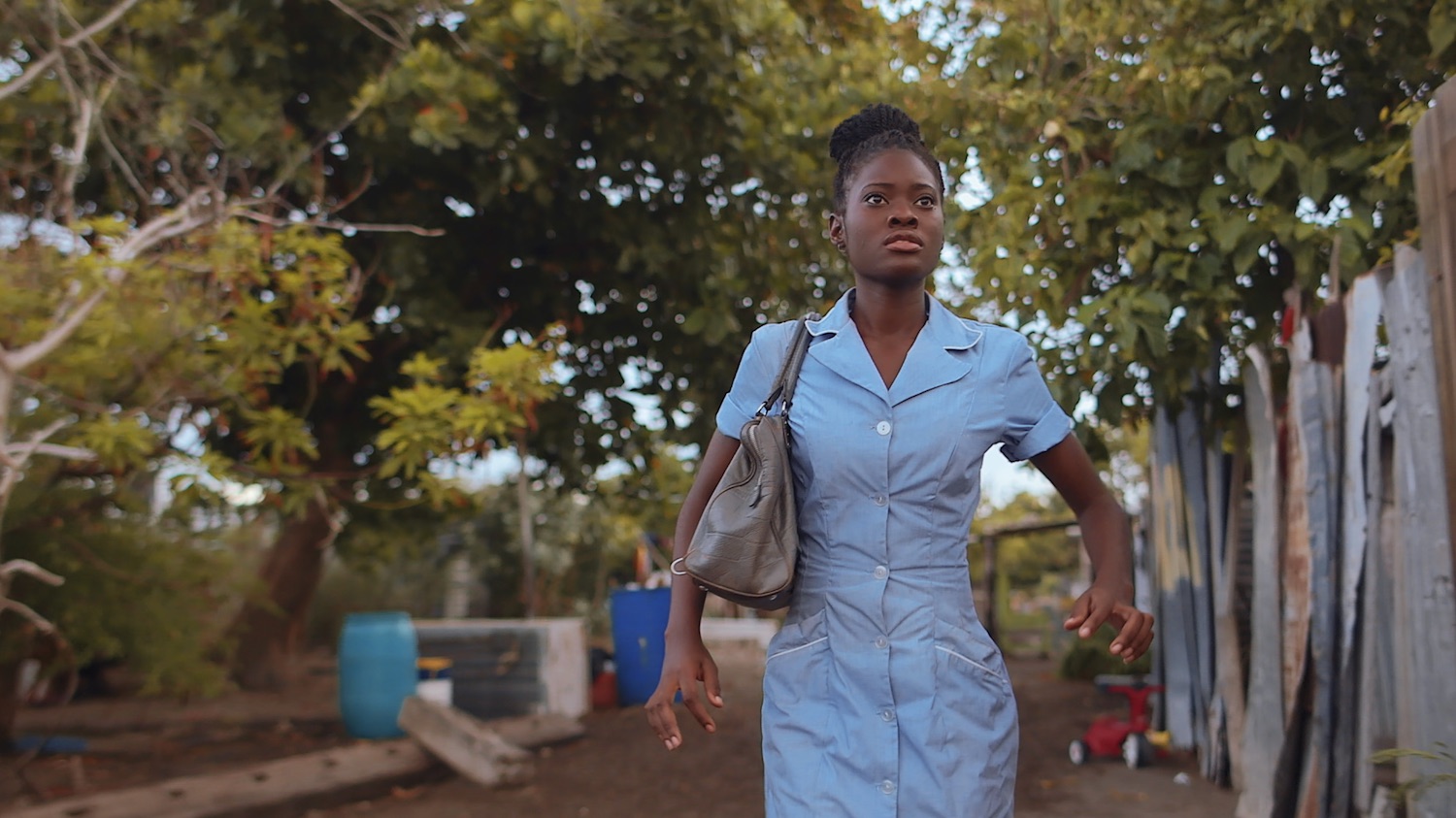 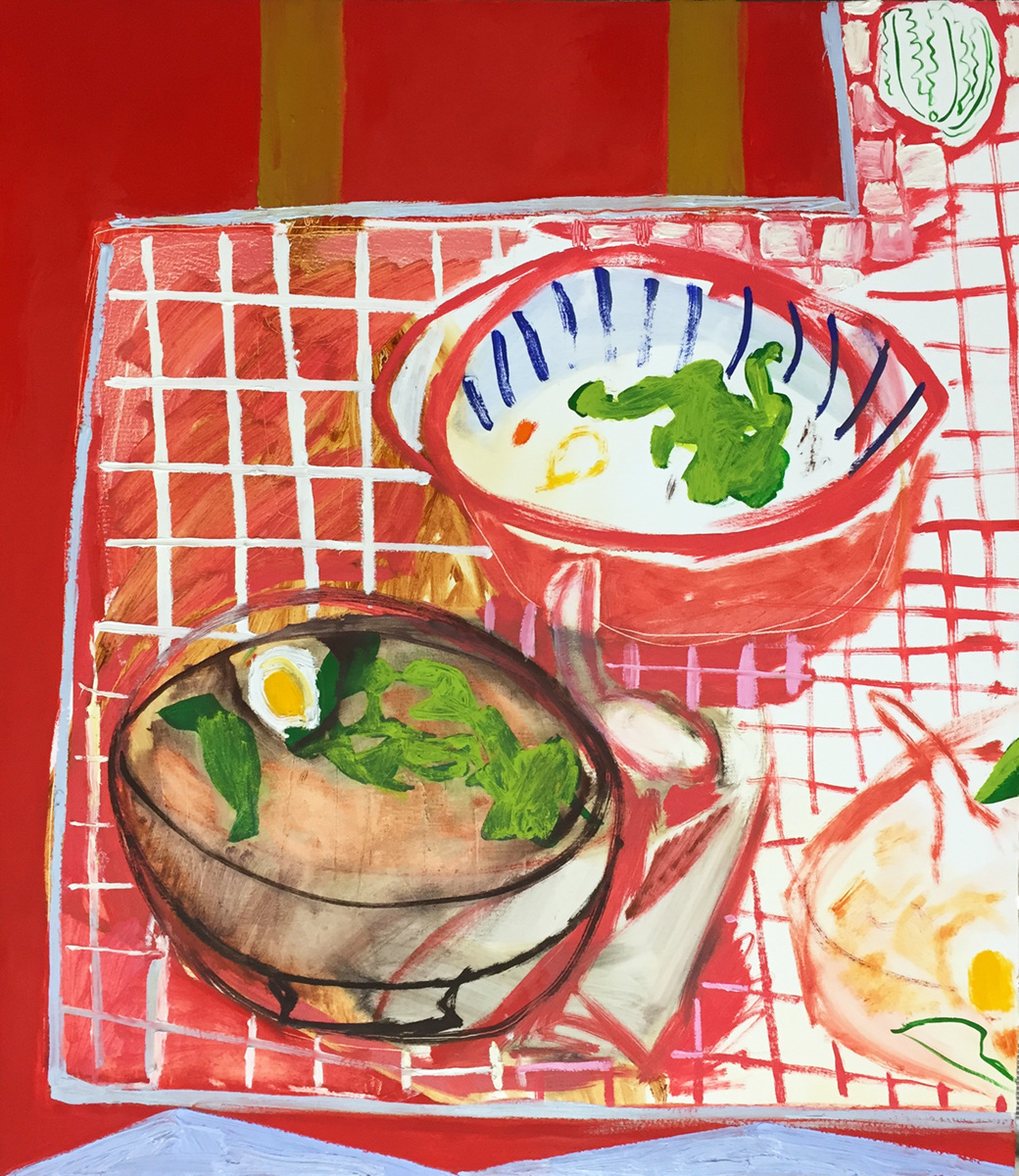 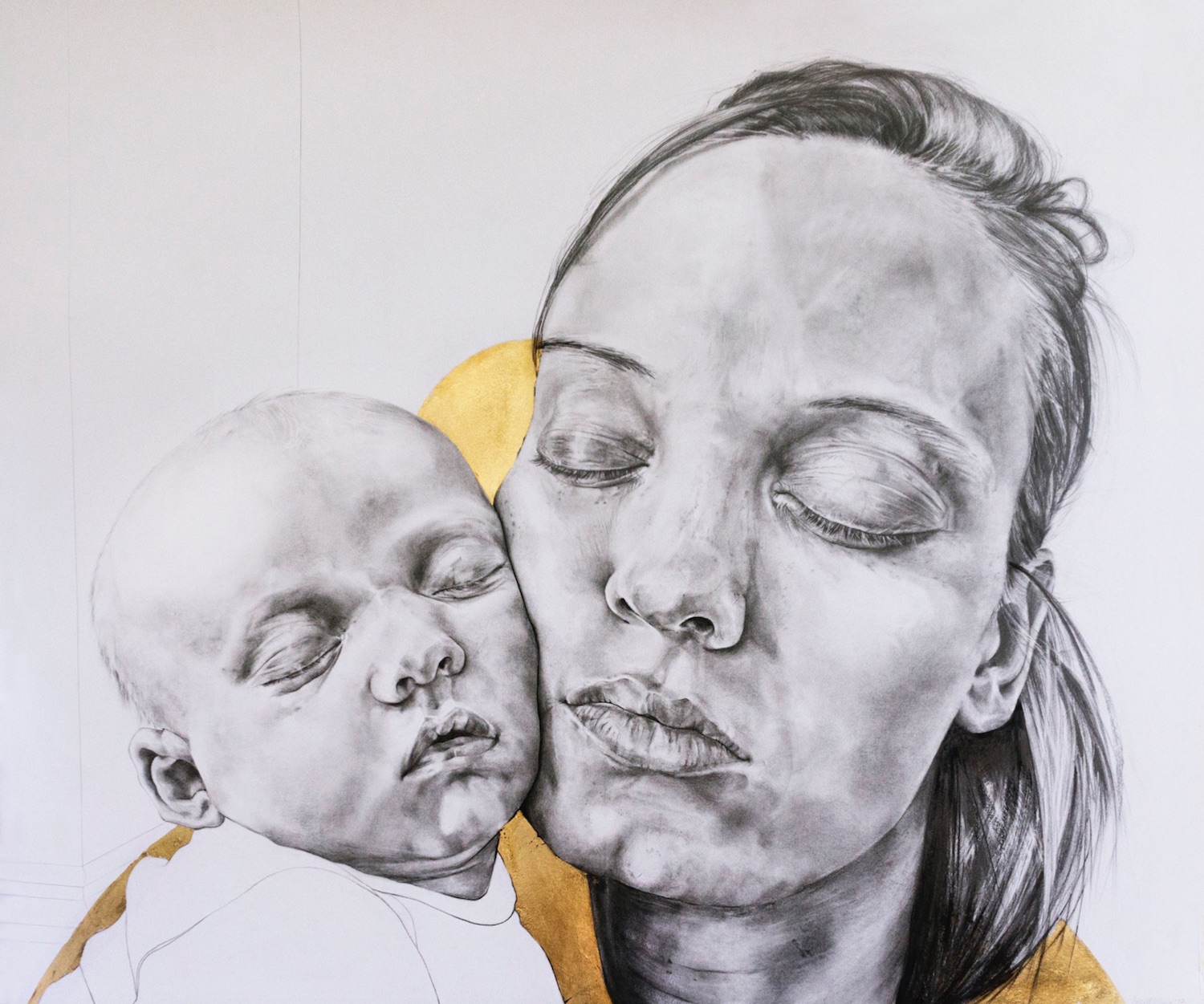 Katherine: I thought we would start off by talking about the show itself. How did you come up with the concept of the show, and how it came to be?

Lee: It was originally a proposal for the 2017 Fellowship call at VisArts in DC. I was 8 1/2 months pregnant and proposed creating a time-based portfolio that documented the day-to-day/month-to-month experiences of new motherhood.

I essentially proposed the show that you saw at Project1628, but I wasn’t accepted into the fellowship. I was pretty disappointed, but had multiple friends say, you should just make the body of work anyway. Then I remembered what you, Katherine, told me in the park last year – to stop making work for a show, and just make it for yourself. Work in the studio and opportunities will come about because of that. So that’s what I did.

So you proposed the show while you were pregnant, before you gave birth?

Do you think of the body of work as a way to plan for motherhood?

I thought of it as a processing tool. What would it do to me emotionally, physically, mentally;how would it affect the structure of my life, but more so the structure of my heart? I just wanted to document everything. The first thing I recorded was a huge feeling of weight, thinking oh my gosh, [my daughter]’s here, this is life or death. A fear that if I mess up, I could potentially kill her.

One afternoon I had just finished breastfeeding, I was in bed propped up with Esther, and felt that weight as she slept on my chest, only a month old. I told Christian to take photos. After that, I didn’t care if the piece would be shown to anybody. The burden was gone after I drew all of that. 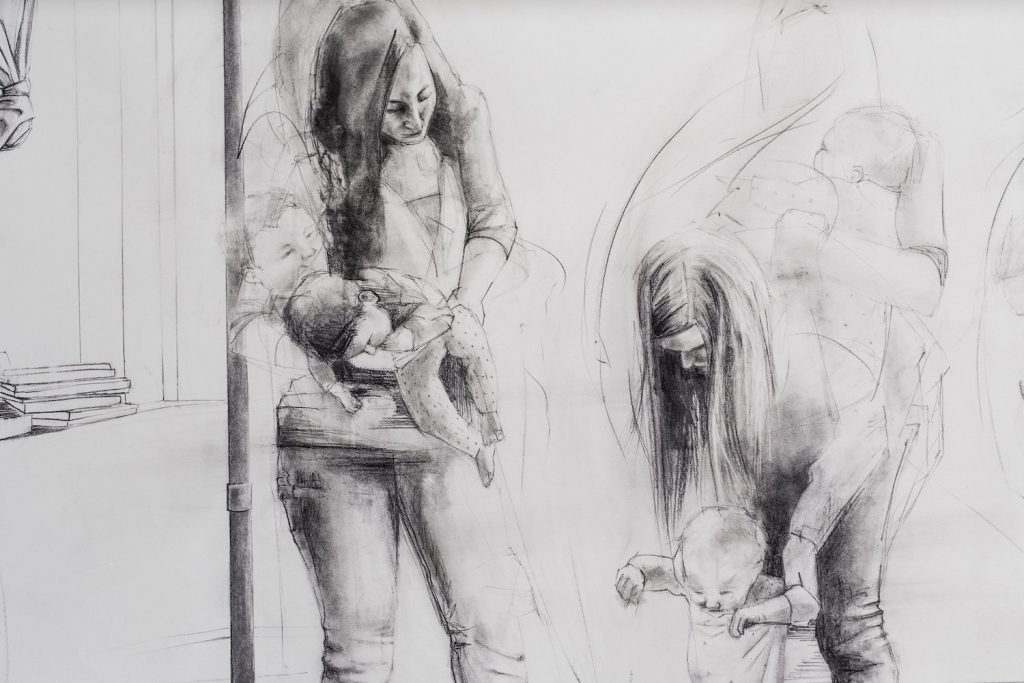 What about some of the other pieces? What came next after that?

The next one was “She Is Me, I Am Her, But She Is Herself” with gold leaf. After I realized the weight I held as the mom, then came an opposite realization. She is her own. She is me, and I am her, biologically – literally, physiologically connected, but she is also completely her own person. There is a point where I end, and she begins. You hear stories of parents who have a hard time making that disconnect, putting too much of their own crap onto their children.

Did you feel the stirrings of that emotion? The first piece describes a type of consuming weight. Did you feel like you were becoming irrevocably attached to that weight?

I can see that in the first piece as well, the weight piece.

Yeah, I agree. From there, I made the laundry diptych. Those pieces wrestle with expectations and stereotypes, but also personal emotions and hormones. The laundry represents the dump trunks that are postpartum hormones, but it’s also a repeated topic my husband and I come back to. The cultural expectations that come with being a stay at home laundry… 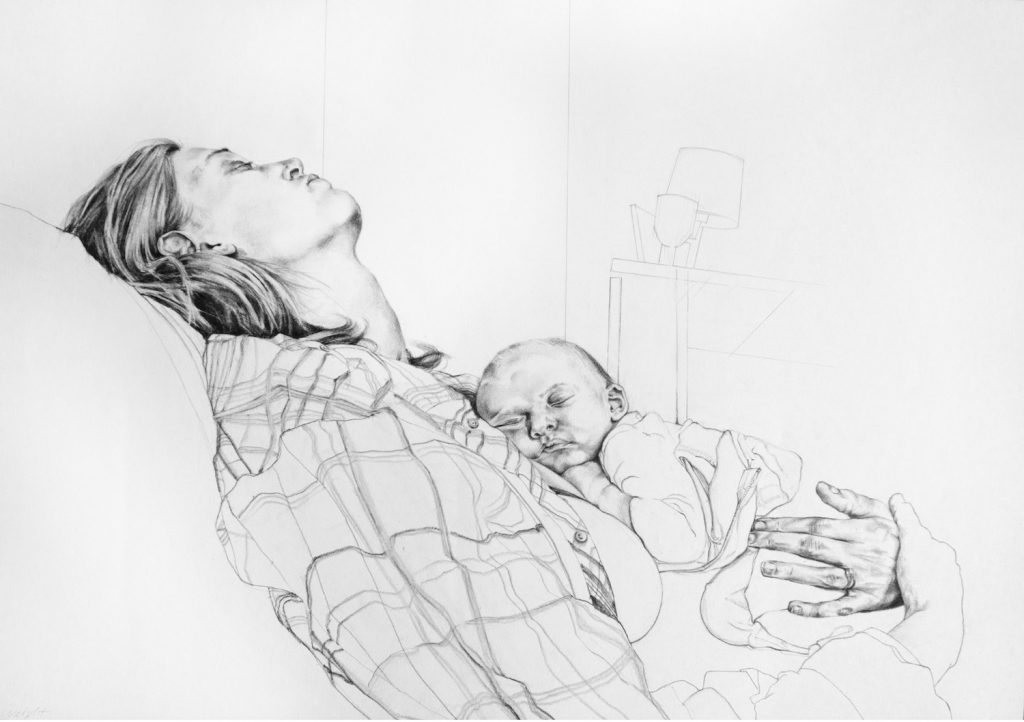 That was an interesting Freudian slip right there.

It was! [Laughing] A stay at home laundry person.

Well, you are a stay at home mom, you’re an artist, and those are both hard things to be in our society. What is your experience of squaring those two roles?

I was, at first, a bit naive to the underlying judgement and stereotypes pinned against mother artists sometimes. However, for me, I couldn’t be doing anything else that gives as much flexibility with Esther. The two definitely compete for my time, but they can move together very fluidly. My mom was a stay at home artist also. I loved seeing her work, and knowing that she was around and close. I remember thinking that is what I want to do . I wanted to have a giant studio and have my babies everywhere. 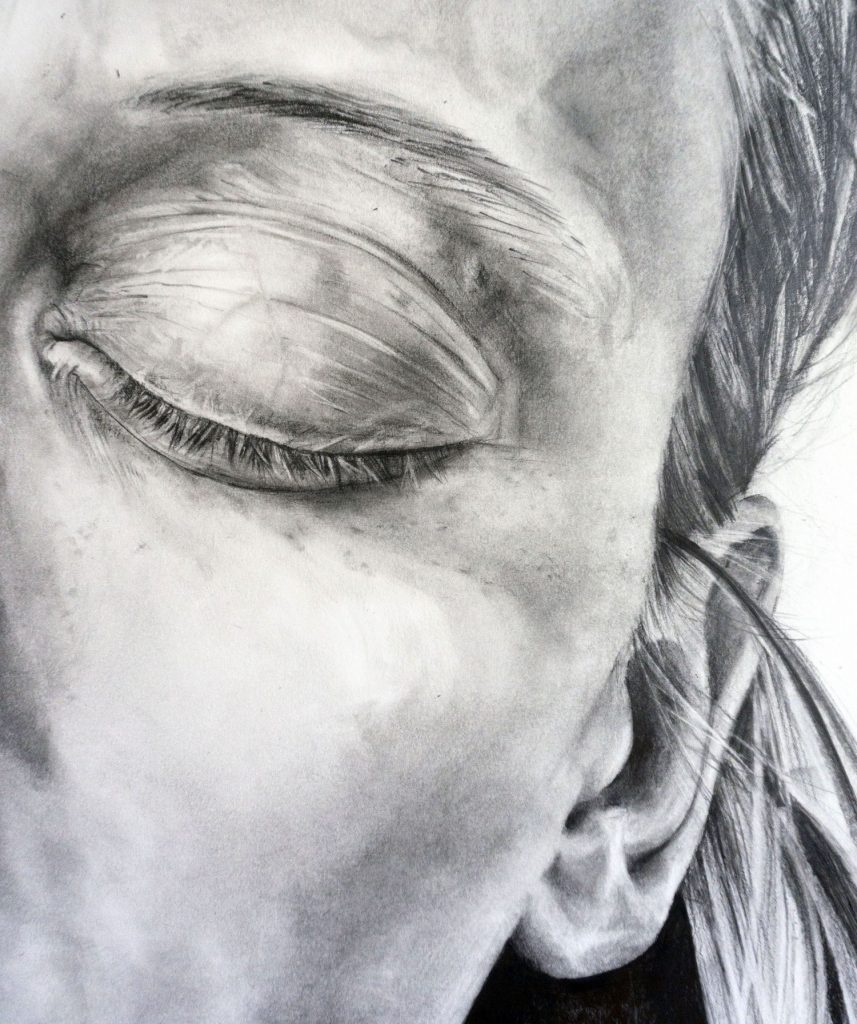 How does the reality compare to that ideal that you had when you were a little girl?

I’m still trying to figure that one out. There’s always a sacrifice and a calculus of which one is going to be prioritized, which is going to come first. I would call it a high calling.

Motherhood, or being an artist?

Both, but just then I meant motherhood. I’m privileged that I was able to get pregnant and be at home with my daughter. Because of that I want to prioritize it. But on top of that I need to remember self care and fueling myself. When you’re an artist, your work is often your self care. The line is fuzzy. Sometimes I prioritize my practice because I know I’ll be healthier when I’m making and producing.

When I became a mom I wanted to cut out the shit and have honest conversations. Breastfeeding is hard, I’m sleep deprived, I’m running at a pace that I never could have imagined before. You’re pushed to the end of yourself but you can’t crash. It grinds on you, and no one really tells you that. My patience, endurance, mental and physical abilities are all challenged, but it started to inform my art practice. Now, I apply that endurance to my concepts and push them to a depth I never had before.

How do you deal with the dual stereotypes of motherhood being about giving, while being an artist is selfish?

I don’t think the two are so contradictory. Instead, I think they inform each other; motherhood gives to my practice, while studio time reminds me it’s ok to take a break, noone is super mom. But it doesn’t end there. Both ignite conversation, and bring people to a round table. I’ve always wanted my work to do that and build relationship. That might sound cheesy, but that’s what my work’s mainly about: connection, honesty. I’m not an artist trying to make big political statements. 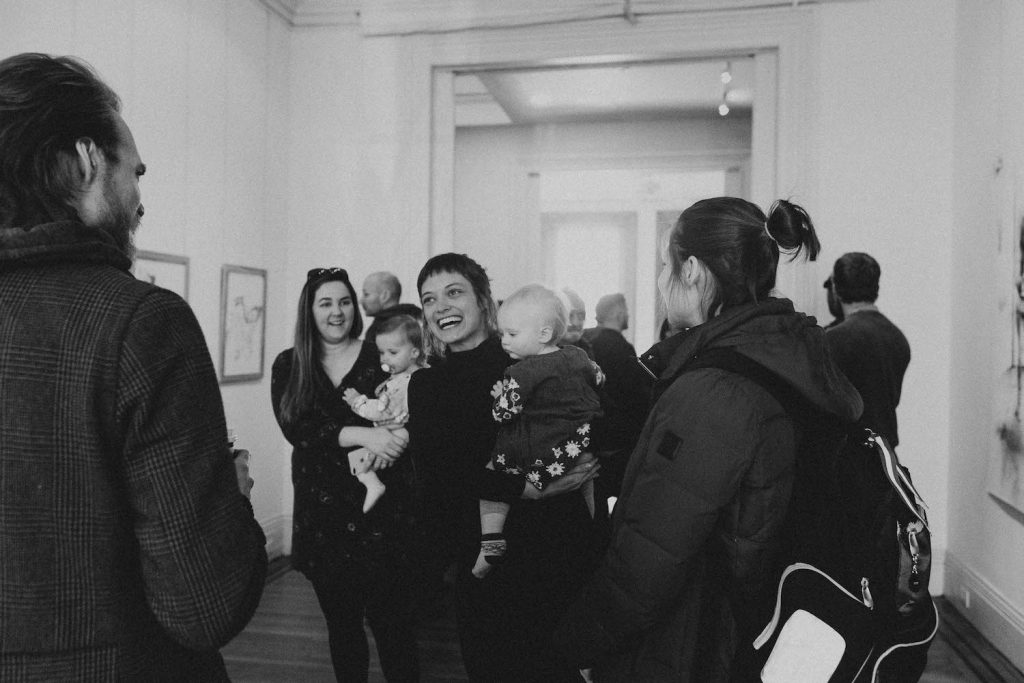 You don’t think this work is political at all?

It’s, at least, not my first intention with the work. If a political conversation comes of it, I won’t shy away from that. But mostly, I want to connect with people and just have real talk. Stop hiding behind the mask, you don’t have all of your stuff pulled together, let’s stop pretending that either of us do.

I like that that comes out of it. But I’ll admit that I question, who am I to make such a big statement? Although I have people tell me I am a catalyst, I’m not a very loud, boisterous person so I have a hard time accepting it. I’d love to see that change about myself though.

You started this work at the end of your pregnancy. Now you’re a year in. How did the work change?

It became stronger than I anticipated it to be. I’m surprised at the volume that this has. After the show, I saw the potential for how far this conversation of relationship, motherhood, identity, vulnerability could go and sometimes I need to step back because it’s overwhelming.

What is that potential for how far this could go? What do you see for the future?

I personally believe that God is the only true “I Am” in this world – the only thing that truly exists and everything else is a stem from that. In life, that idea breaks into a million webs of how we’re all intertwined. Without relationship, everything is a shell. I really want you to look at my artwork and be stripped naked. But I will first and foremost do that myself. With my work, I’m standing naked in front of my audience, saying, this is the mess.

This is the process that I just went through, where I’m going, what I’m trying to figure out. Showing you my imperfections. Showing you my wisdom at the same time as my complete lack of it. Hoping that you’ll choose to come and meet me there.

Lee Nowell-Wilson earned her BFA in Painting from the Maryland Institute College of Art. Her work has been exhibited in Baltimore, Annapolis, New York, and France, and she has completed urban art pieces in Norway, France, Northern Ireland and Chile. As well, she completed a year long artist residency in Annapolis, MD, and a 5 month long urban arts residency in Lyon, France. She currently lives and works in Baltimore, MD with her husband and 1 year old daughter.

Author Katherine Tzu-Lan Mann is a painter and installation artist based in Washington, DC. Her work explores themes of landscape, heterogeneity, utopia and escapism. Some of the venues where Mann has shown her work include the Walters Art Museum, Corcoran Gallery of Art, Rawls Museum, the Art Museum at SUNY Potsdam, US consulate in Dubai, UAE, and the US Embassy in Yaounde, Cameroon.