Worlds Away: The New Glenstone 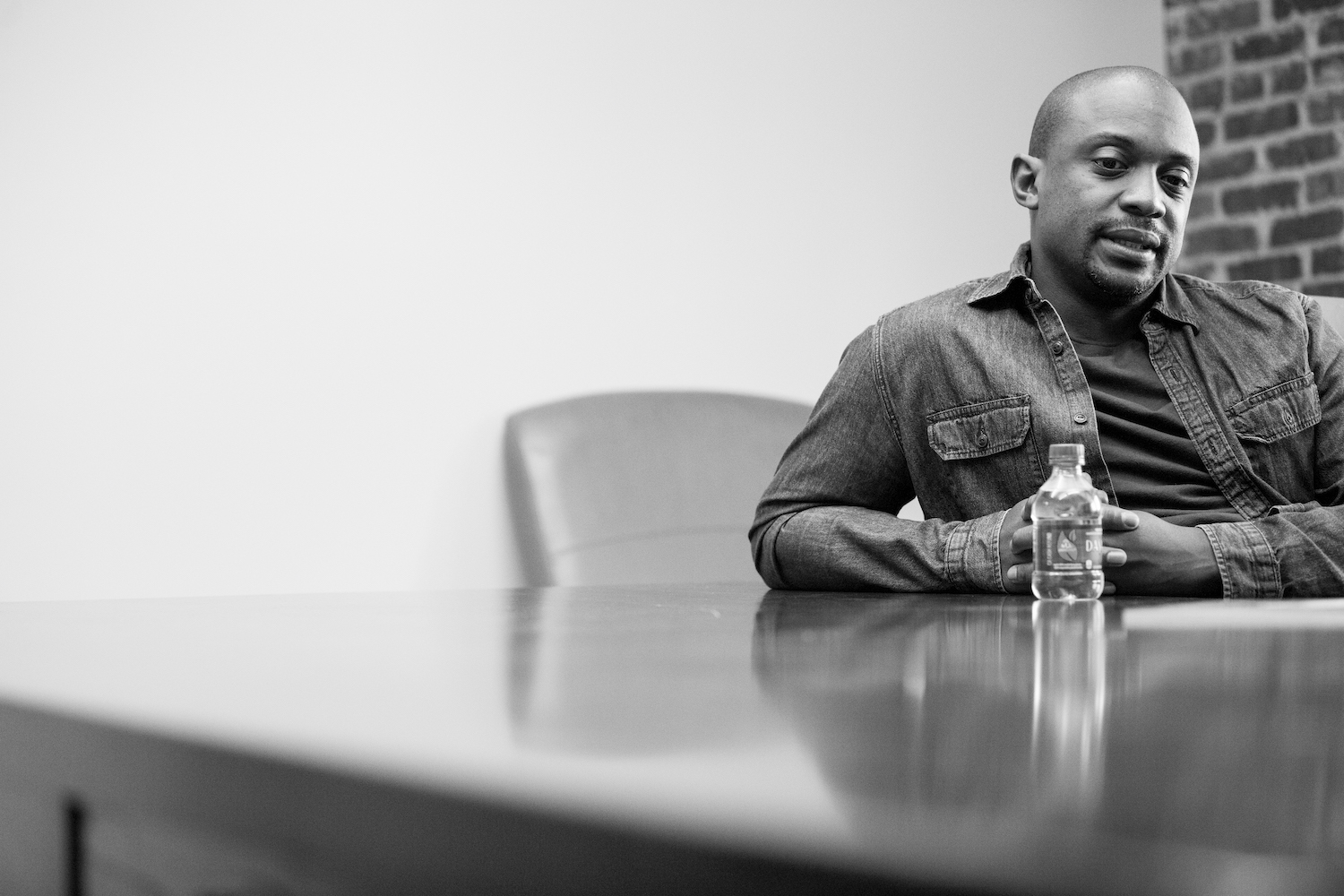 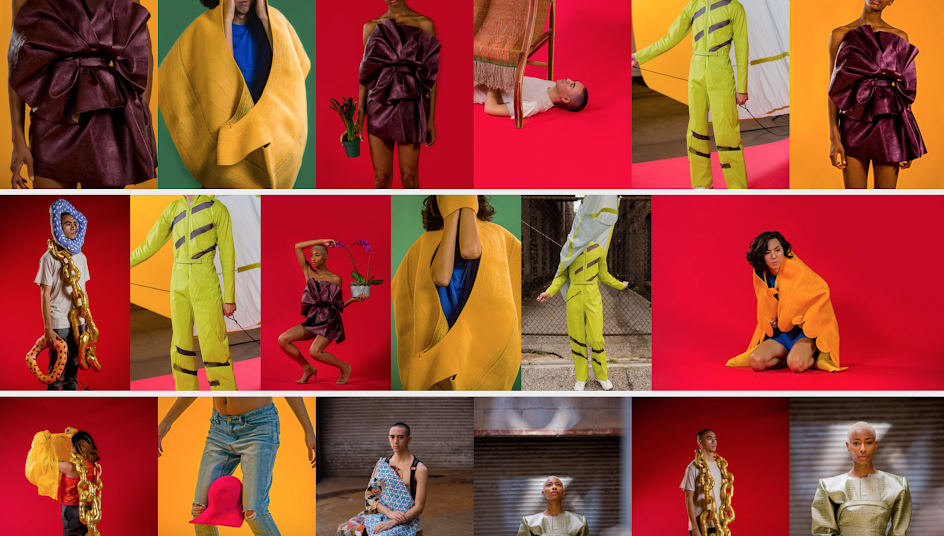 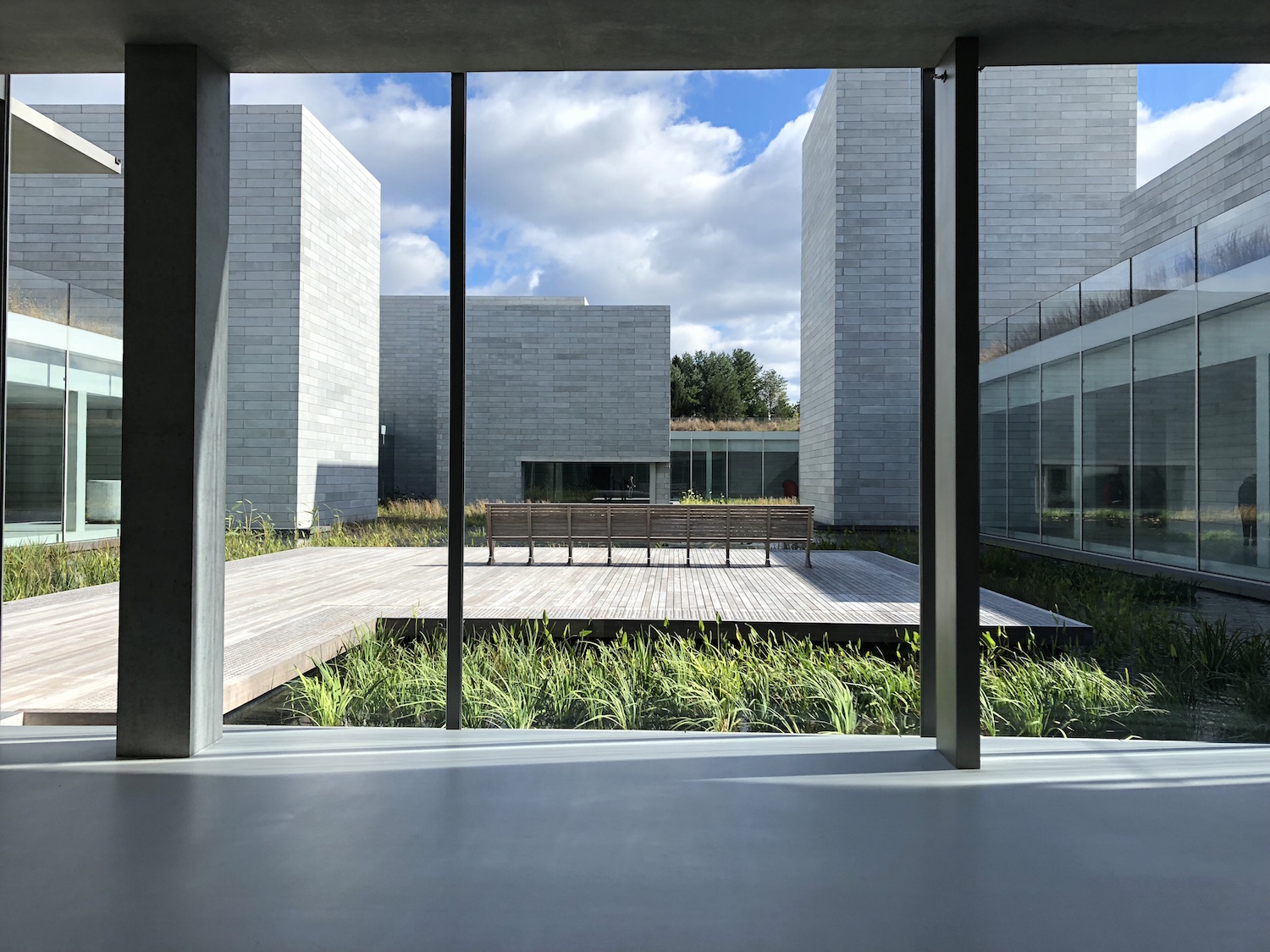 A Trip to the Newly Renovated Glenstone Museum in Potomac, MD by Amber Eve Anderson

The Glenstone is full of contradictions. While it is free and open to the public, it is also privately owned, remotely located, and booked three months in advance. After a significant expansion, its newly inaugurated pavilions designed by Thomas Phifer boast 204,000 square feet, but offer just 11 gallery spaces, nine devoted to single artists from the collection. One gallery features no art at all, rather a collection of books and a bench that faces an expansive window overlooking an additional 130 acres of newly acquired land. Some see the $200 million endeavor as a tax write off for the owners, Mitchell P. Rales and Emily Wei Rales, while others substantiate the investment as a unique opportunity to experience art in a highly specific and intentional way. Just an hour drive from Baltimore—over interstates and through suburbs until you hit the narrow two-lane roads winding past picturesque farms that skirt the third richest county in America—it is worlds away.

Glenstone presents as a fortress and—at least initially—is intimidating in the worst ways that art institutions can be. There is an air of secrecy and security. The signage is subdued, and the buildings are tucked behind the slope that extends from the road. Two men dressed in all black stand in the drive checking tickets before directing you to the parking lot. From there you enter the first of the new buildings where your ticket is scanned, and you’re oriented. The demeanor is warm but austere. The sequence of arrival is just the beginning of an utterly controlled experience that extracts you from the typical demands of day-to-day life, both internal and external. Even the doors—immense and heavy, slow to open—are designed in such a way that slows you down with them. 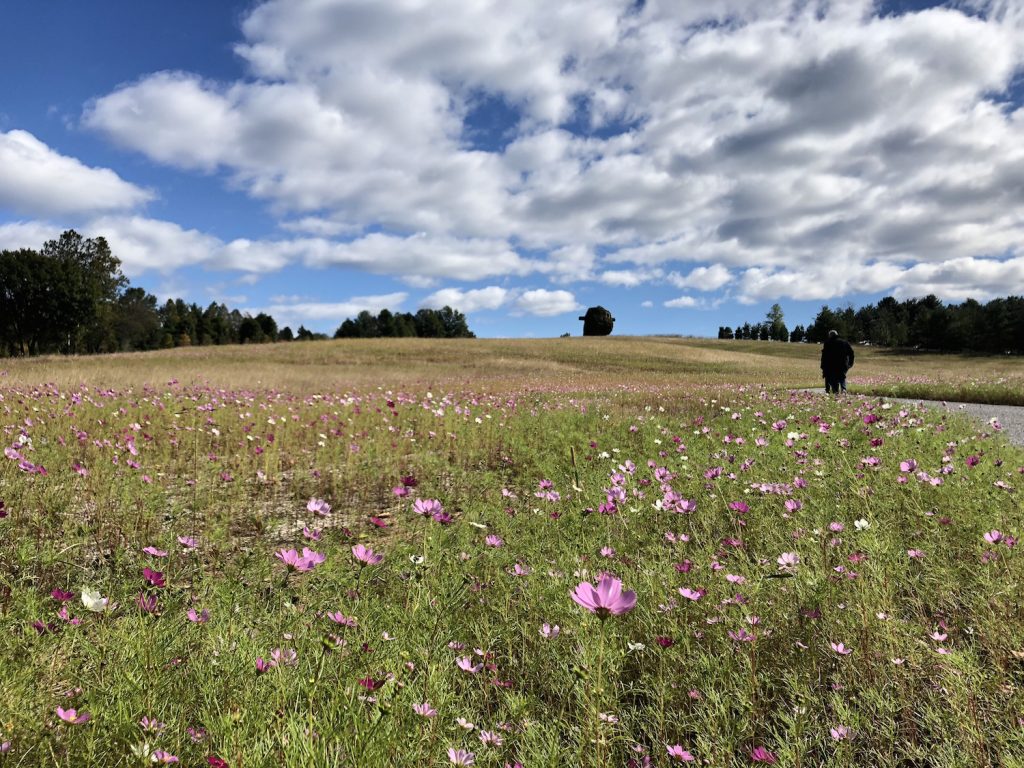 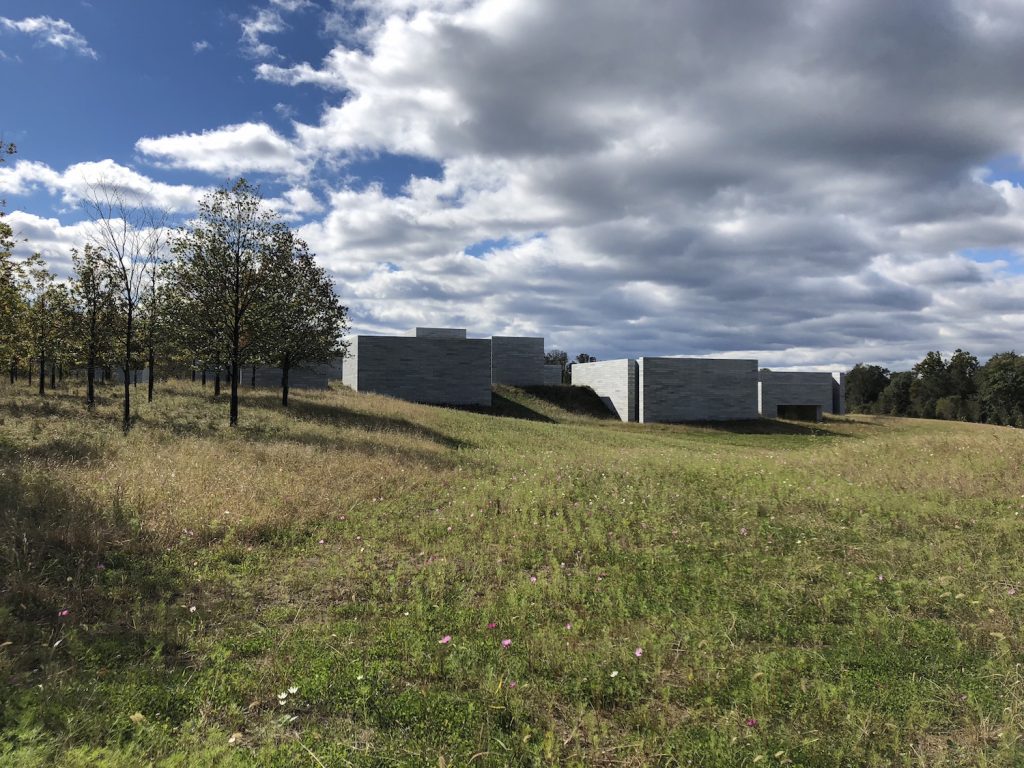 From the Arrival Hall, a path leads toward sloping fields that were carpeted in pink flowers at the time of my visit. On the ridge in the distance is Jeff Koons’ Split-Rocker, a 37-foot-tall cartoon-like animal head covered in flowers. As the path gently curves, the pavilions come into view—stepped concrete block structures of varying sizes. Photos are not allowed indoors, and the fact that my phone mostly didn’t have service anyway, contributed to the overall sense of escape. Inside the entrance is a work by Lawrence Weiner:

MATTER SO SHAKEN TO ITS CORE

TO LEAD TO A CHANGE IN INHERENT FORM

TO THE EXTENT OF BRINGING ABOUT

A CHANGE IN THE DESTINY OF THE MATERIAL.

The sentiment brings to mind the idea that Glenstone as an institution is setting itself apart from the rest. What the expansion does so well is frame the world outside it. In directing the gaze outward, the natural world is rendered so vivid that what might normally be taken for granted, suddenly consumes your attention. It is serene and meditative. 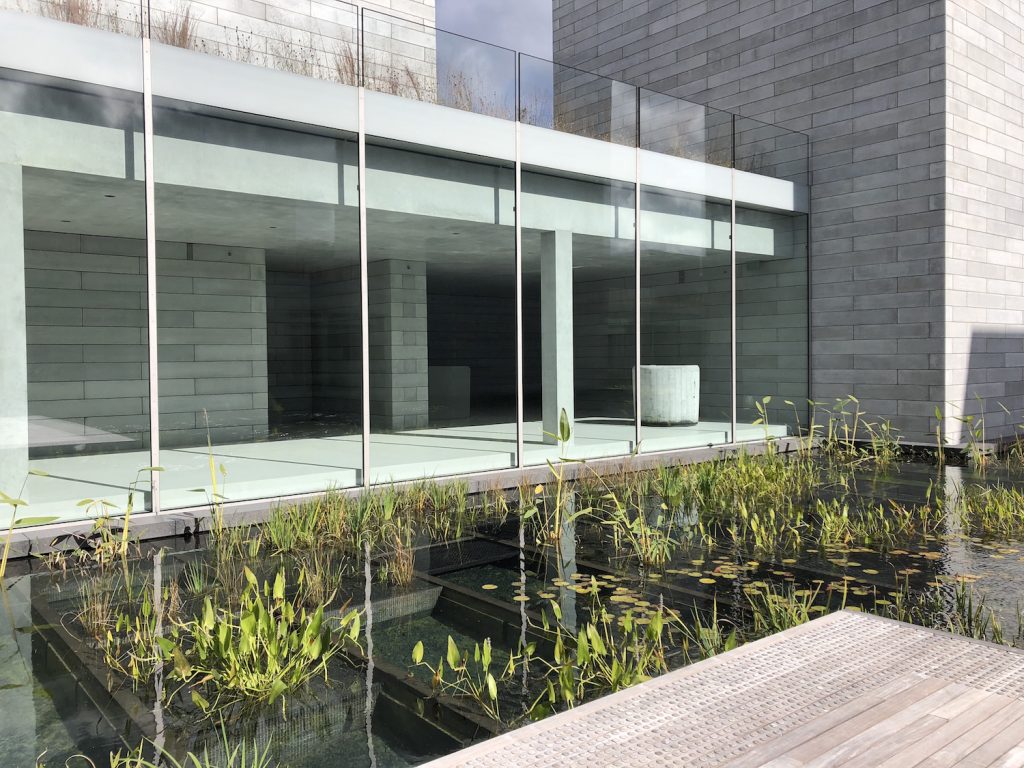 Descending the staircase to the lower level, the 18,000 square foot Water Court is on display, around which the galleries are centered. The first is dedicated to the Rales’ substantial collection, with works from Willem deKooning, Marcel Broodthaers, Yayoi Kusama, Anne Truitt, and David Hammons. Light filters into the galleries from high above, gently flickering as clouds pass overhead, so that even the interior galleries are connected with the outside. Continuing clockwise around the corridor are the remaining galleries, each of which is devoted to a single artist’s work. In the room with On Kawara’s Moon Landing Series, the ash floors are the only wood floors in the building. As the Field Guide states, “The change in materials marks a subtle shift as visitors cross the threshold into this room—the tallest in the Pavilions, and one of the last projects the artist oversaw personally before his death in 2014.” These discrete but intentional details are what Glenstone is all about.

Next is the room-size installation of Rober Gober’s Untitled from 1992. A guide directs viewers inside a room within a room. In the dark corridor behind the closed door, the framing is still exposed on the walls, and stacks of newspapers are piled on the floor. Through another doorway, the dramatically lit interior room depicts a floor-to-ceiling forest scene done in a paint-by-number fashion, glimpses of the underdrawing speckled throughout the scene. Three sinks are installed on two opposite facing walls, the taps running, water pooling shallowly within, mimicking the sound of a trickling steam. Below these are boxes of rat bait; above are square windows with a soft blue peeking out from behind bars. Untitled is followed by an outdoor gallery with a work by Michael Heizer: 15 metal beams dropped into a cavity in the center of a roofless, walled space. Subsequent galleries are dedicated to Pipolitti Rist, Charles Ray, Lygia Pape, Brice Marden, and Cy Twombly.

My reverie reached its height when I stopped for lunch in the café. The room itself is beautiful, filled with three long communal tables and modern bentwood chairs. The glass wall on the far side of the room overlooks a lush forest and calls to mind the painted walls of Gober’s installation. But it was the noise-level that got me: the perfect combination of gentle clinking and muffled conversation that is ideal to a café, thanks to the thick noise-reduction felt pads installed on the underside of the length of each table. This small detail points to the level of precision in the design of each and every aspect of a visitor’s experience at Glenstone.

Past the original building (with a Louise Bourgeois exhibition up through January 2020), you begin to hear a sound installation by Janet Cardiff and George Bures Miller titled FOREST (for a thousand years…). A path leads downhill toward a stream before branching back into the forest where a blanket of pine needles ends in an intimate clearing of tree stumps. The 28-minute loop surveys history with surprisingly distinct aural representations. Crickets and nocturnal animals lead to birds chirping and branches crackling, then hooves clomping followed by chains and heavy machinery grinding. The 22-channel installation moves sound in every direction so that some pass right through you. There is the marching of an army and airplanes overhead. Distant droning followed by flies buzzing. A woman screams. A child’s piano tinkles. A horse neighs.

The path that runs parallel to the stream passes by three Andy Goldsworthy houses. New bridges were constructed over the stream that end in benches just on the other side. A raised wooden path zigzags over marshy land where two Gober sinks are installed upright in the dirt, the white forms alluding to ghosts or tombs. Up out of the forest, the path leads back toward the original building, tall grasses blowing wildly in the wind, taking you past works by Richard Serra and Tony Smith.

Before leaving, I stopped for coffee in the final new building: the Patio. Looking over the lounge chairs glinting in the sun outside, I soaked in every aspect of this retreat. My mind felt a little less crowded. A visit to Glenstone forces you to slow down. To see the world around you anew. This new lens is expansive, but itself, another contradiction: for all that went into the expansion, ultimately, it is the world itself that you see with new eyes.

Advanced tickets are required and released in three-month increments on the first of every month at midnight.

Full disclosure: The author of this article was part of the team contracted by Glenstone to paint the mural in Gober’s “Untitled.”