Effigies of Voice: Ursula von Rydingsvard’s ‘The Contour of Feeling’ at NMWA 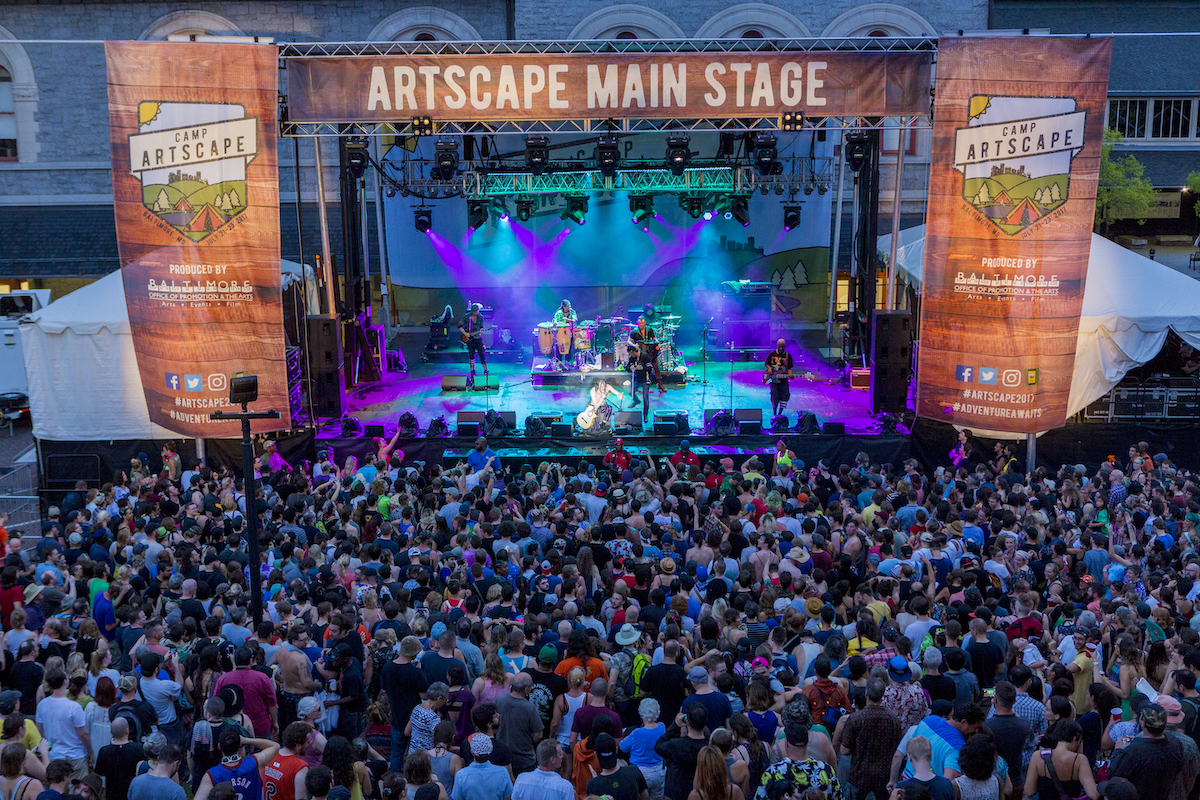 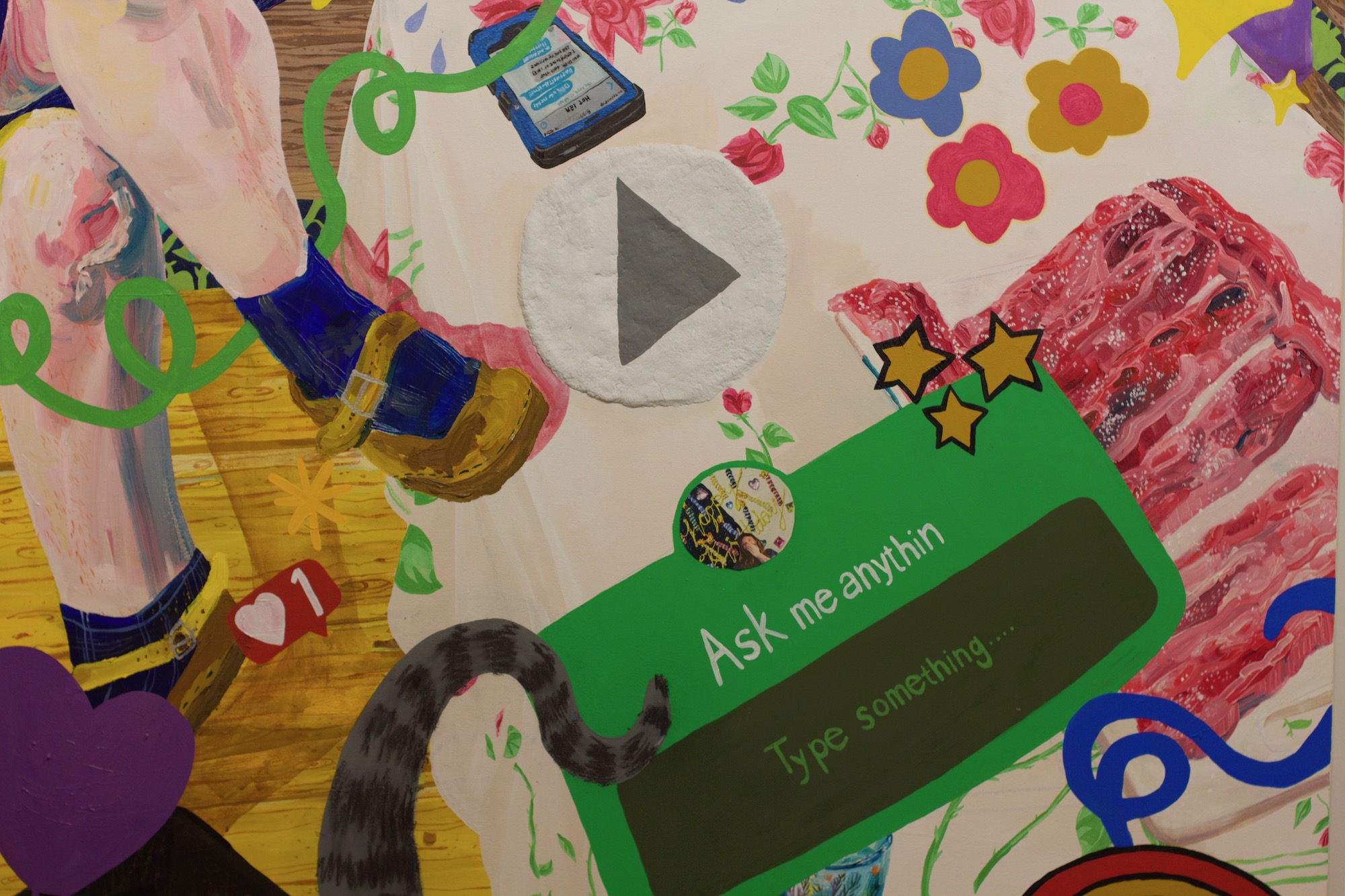 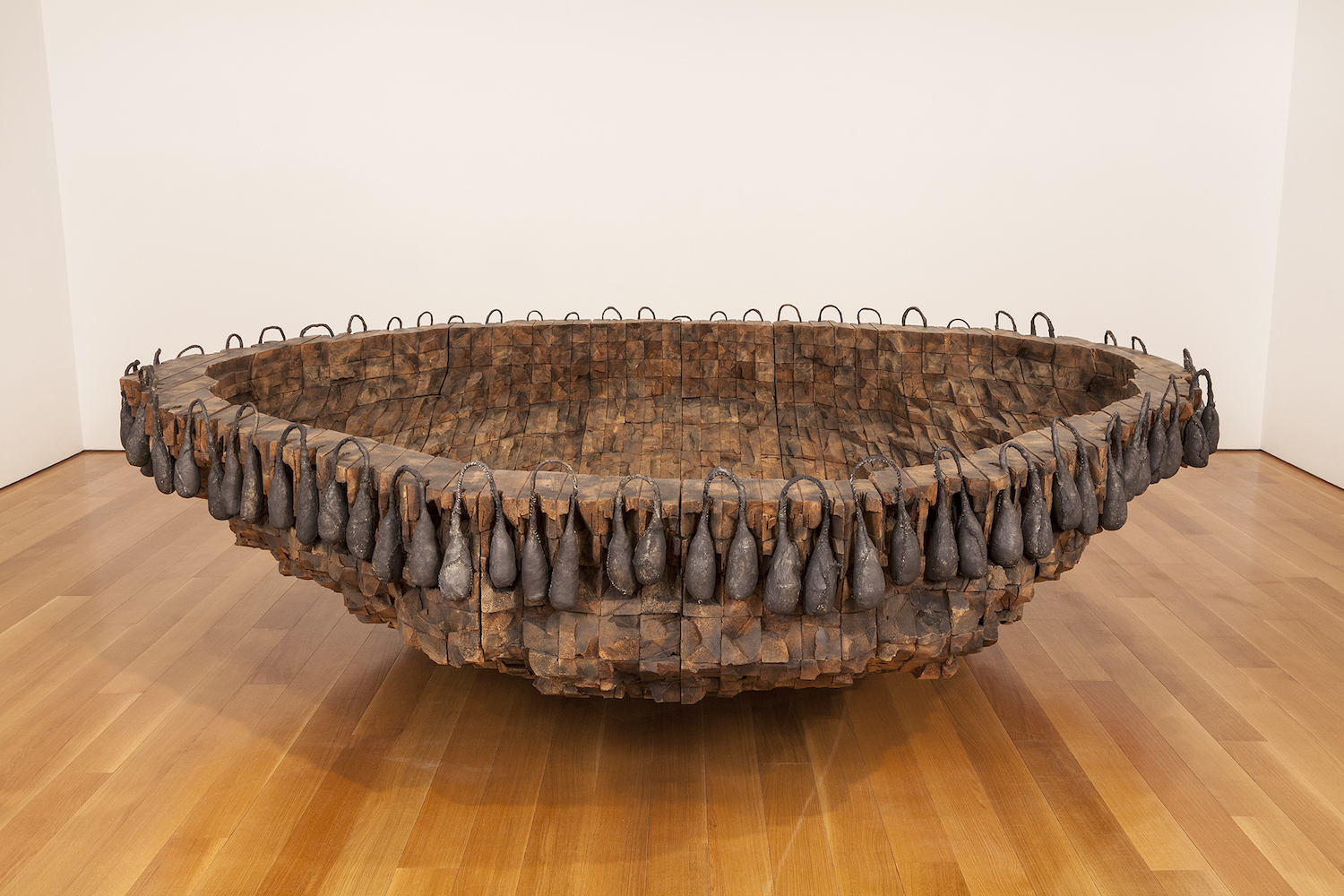 Ursula von Rydingsvard’s soothing wooden sculptures were so inspired by poet Rainer Maria Rilke that she titled her solo exhibition, originally at the Philadelphia Fabric Museum and now at the National Museum of Women in the Arts (NMWA), The Contour of Feeling. For the Brooklyn-based sculptor (b. 1942, Deensen, Germany), Rilke’s writing and concept of Weltinnenraum (roughly translated from the German to “an interior space of the world”) are the central inspiration for the way she thinks about her monumental, abstract sculptures and her primary material of cedar. Her best-known works accumulate tiny, repetitive, intuitive human markings—carving, cutting, smoothing, gluing, digging—in relationship with the larger, mysterious, and protective forces of nature.

Von Rydingsvard cites Rilke’s writings as the primary inspiration for her fascination with how objects can affect the way viewers physically and instinctually negotiate their way around negative space. The result is an invigorating experience where outsized scale, rough textures, natural materials, and sometimes disorienting installations of von Rydingsvard’s abstract sculptures allow her ideas to be heard clearly and in complete silence. 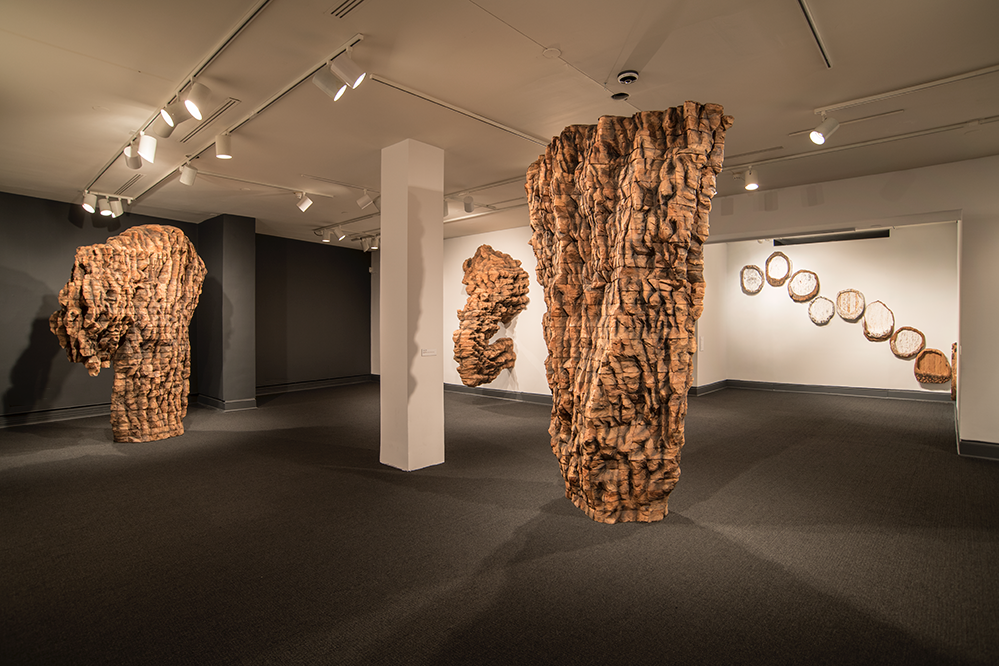 The NMWA show is the artist’s most comprehensive retrospective in the United States to date, featuring 26 cedar-based sculptures along with one made of leather, several paper works, and a mixed-media installation. Guest curator Mark Rosenthal designed this show to focus on art von Rydingsvard has made since 2000, with several earlier pieces to provide context for her work’s evolution. The abstract physicality of each piece personifies her intimate bonds with nature, but also suggests intangible spiritual, emotional, and universal relationships, effectively transforming the museum into a sacrosanct space. Walking through the gallery offers an overwhelming sense of promise; each piece feels like a sacred object, a newly formed Ark of the Covenant, with the heightened sensitivity of rounded, hard edges and warm, muted tones. There is a raw power in the natural resources that she carves and rearranges; there is also emotional depth underlying it.

One major set of influences that von Rydingsvard has cited in interviews was her woodcutter father and growing up in Europe during WWII. She spent most of her childhood in a Nazi work camp where her Ukrainian father and Polish mother were forced laborers. After the war, she grew up in refugee camps with her family until they moved to the United States in her early teens.

In an interview with Art21, she recalled, “If I were to point to something from the camps that one can see most directly in my work, it is that we stayed in barracks—with raw wooden floors, walls, and ceilings.” To better cope with the realities of a cruel and unstable world, the artist developed a process to experientially rework the trauma of her early environments into something stable, entirely new and healing. A predilection for working with wood evolved into her signature style that combines anthropomorphic and biometric shapes and material textures (such as wood, leather, or cloth) to evoke instinctual feelings of comfort, solidity, and strength—but defies easy description. 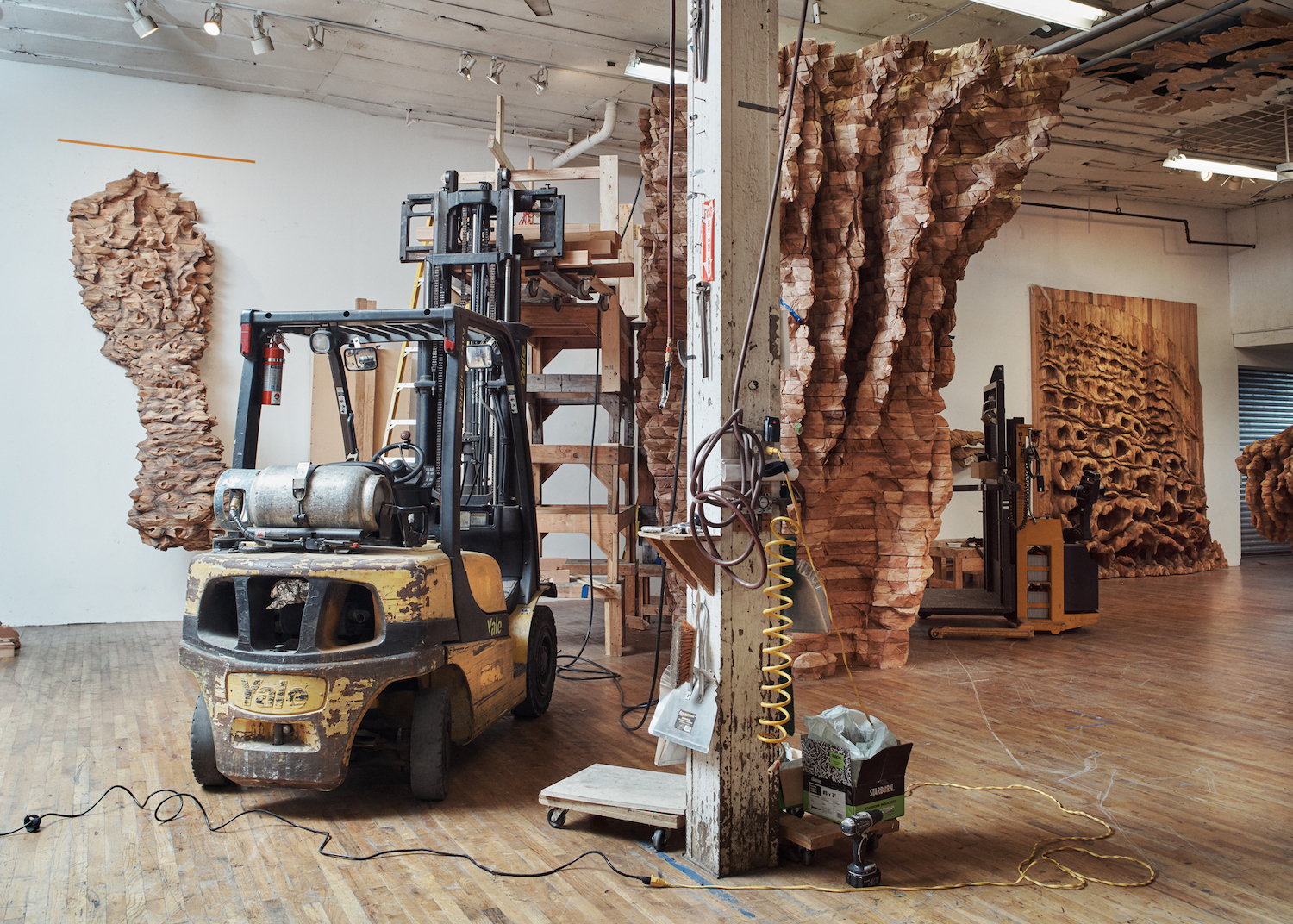 Several significant works, such as “Krypta I” (2014), dominate the front of the exhibition, which fills the museum’s entire second floor. Over seven feet tall and just as wide, the way it commands the disproportionately small space makes me want to automatically take a step back, intimidated. However, when I see the glint of the dusted graphite over the roughly faced wooden blocks of this piece, I lean in and intertwine my own space with that of the sculpture, and we meld for a brief moment. Up close, I can better appreciate the gradation of earthy colors that twist between light and dark within the faceted cuts of wood. “Krypta I” and the other sculptures that climb up the walls and in the middle of the floor are reminiscent of Stonehenge, vestiges of a long-forgotten ritual that monumentalized life and death.

Such dramatic work is somewhat balanced by smaller, more intimate ideas, such as “Untitled (stacked blankets)” (2014) which lies low on the floor with only a four-inch platform for support. The flat pile is blanket-like, but is surprisingly made of intestinal membrane. It seems soft, like cotton pads from a freshly opened bag; its placement on the floor makes me view it, counterintuitively, from a much farther distance than the massive sculptures that surround it. The feeling of this piece, nimbus-like and neatly contained, evokes the points in life where it’s okay to be at rest. 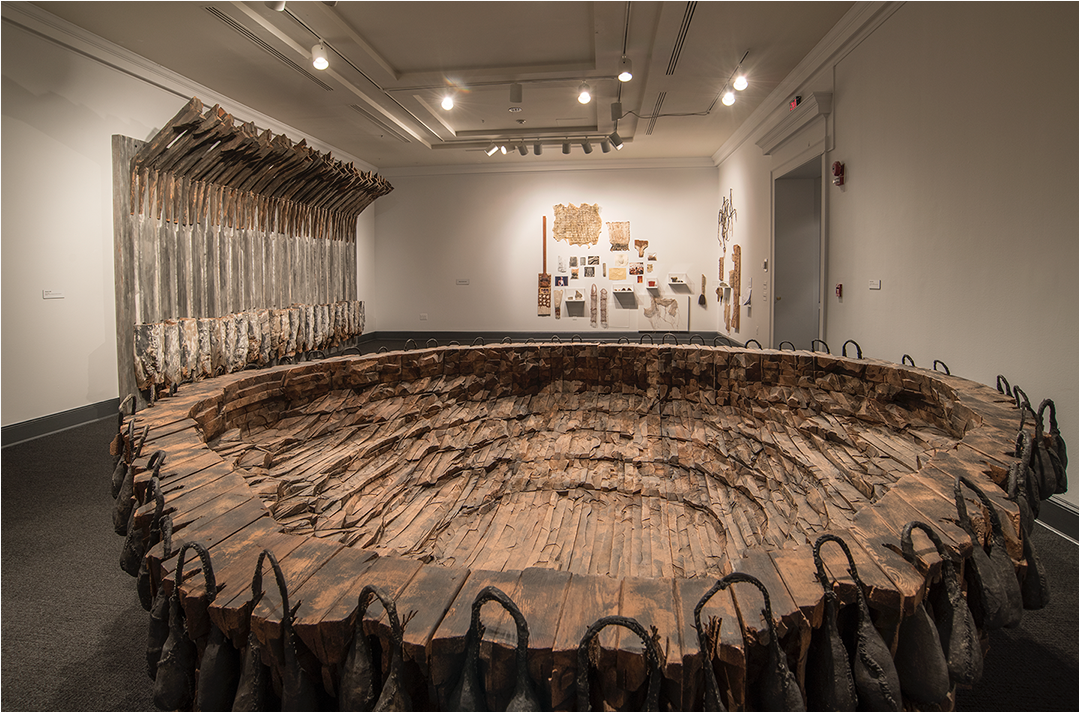 One of von Rydingsvard’s most well-known techniques is splitting a block of wood into many different pieces, and then using jigsaw-Jenga-like precision to build it all back together again. Her repeated division and reunification processes mirror the continuity of disintegrating and reformed relationships in reality, her technique pointing to a yearning compulsion to fix broken things and to remake them better than whole.

The exhibition at NMWA demonstrates how the artist coped with untold horror and violations of personal autonomy, transforming her personal pain and experiences into dramatic objects that offer opportunities for others to heal, reflect, and commune with natural materials on their own terms. However, the exhibit goes beyond healing and into innovative methods for evocative materials, proof that artists actually work in communion with their materials rather than mastering or controlling them. Ultimately, the artist’s respect and sense of wonder for wood and other natural materials allows her to create large, devotional objects that emphasize their most powerful inherent characteristics but also to gently transform them into protective sentinels against life’s harsh realities. 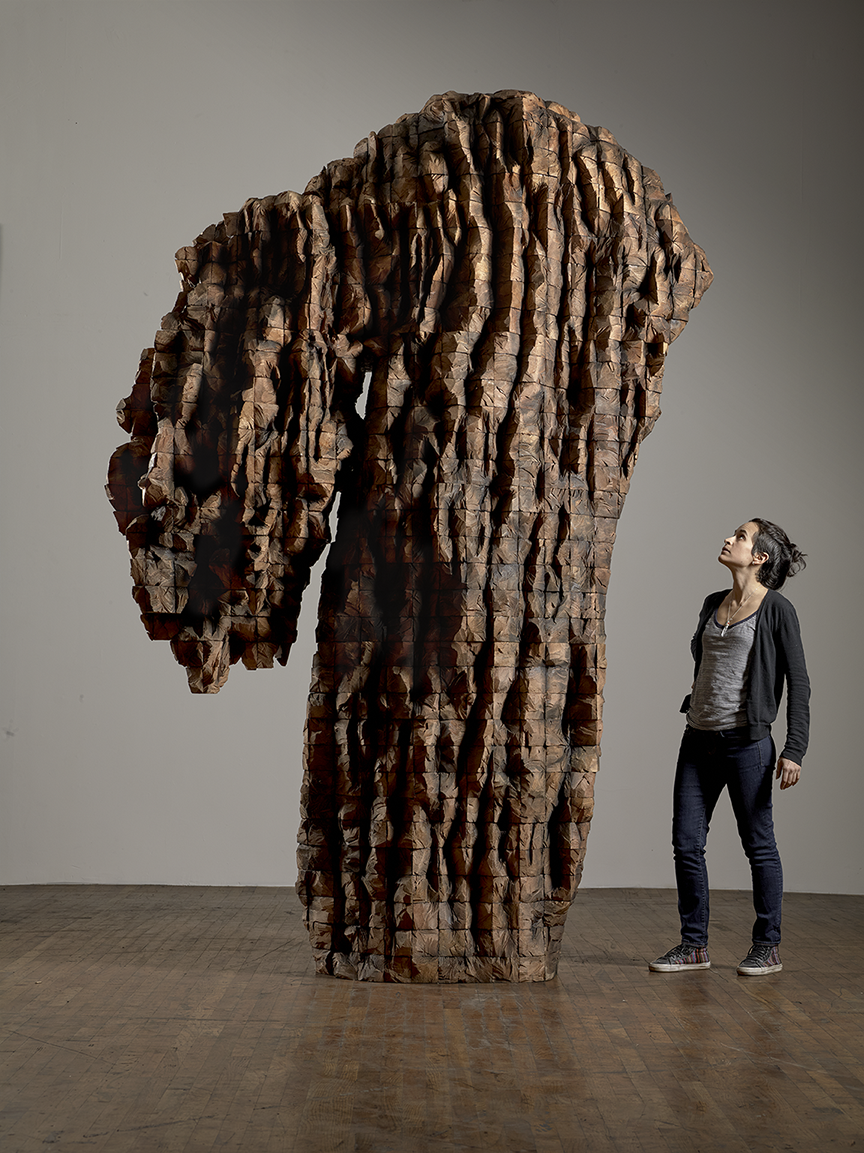 The Contour of Feeling is on view at the National Museum of Women in the Arts in Washington, DC daily, from March 22–July 28, 2019. Admission to the museum is $10.

Ursula von Rydingsvard: The Contour of Feeling is organized by The Fabric Workshop and Museum, Philadelphia, and guest curator Mark Rosenthal.

Images courtesy of The National Museum of Women in the Arts.