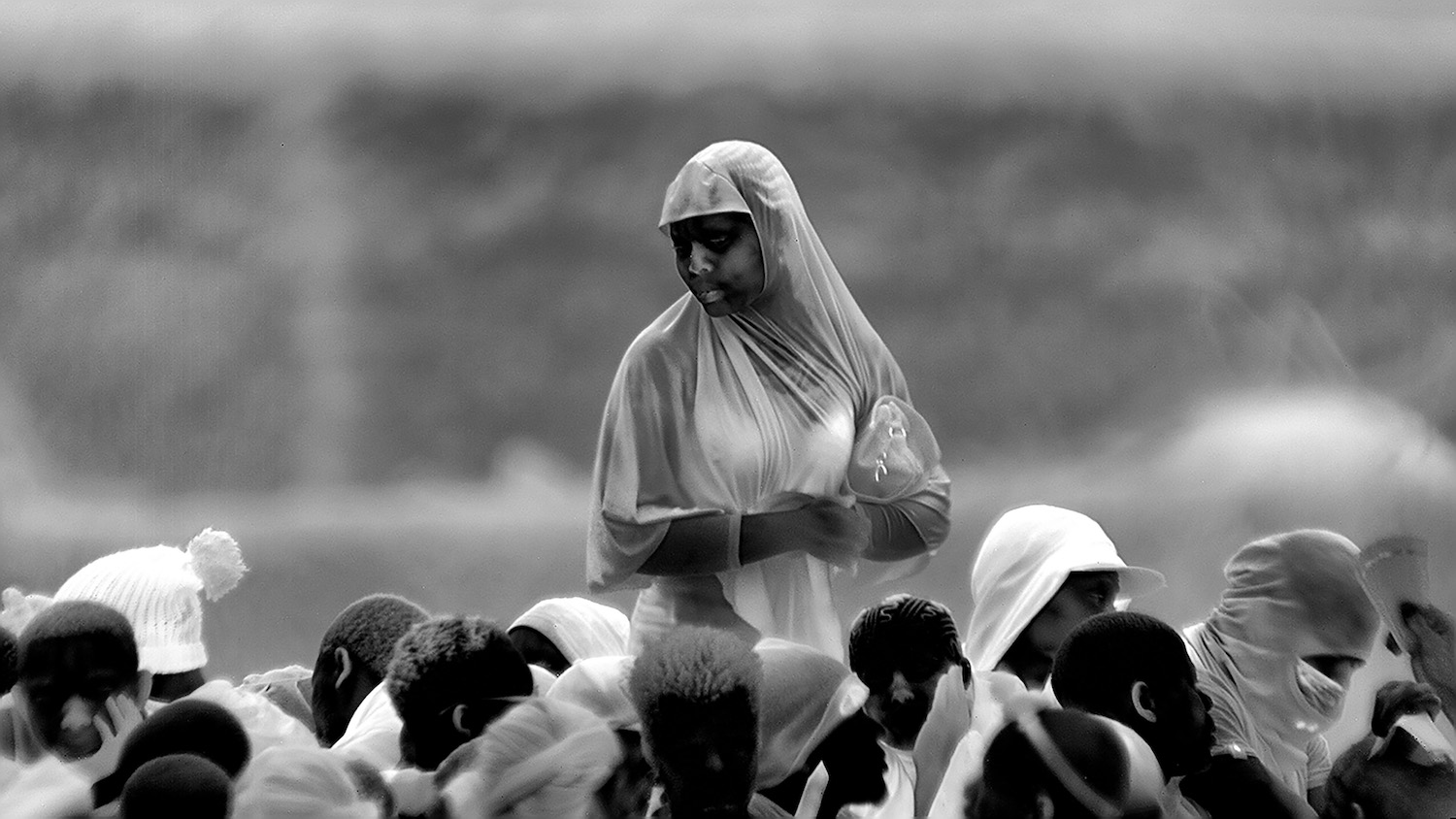 The Things They Carried: Duchamp and Mosse in Was [...] 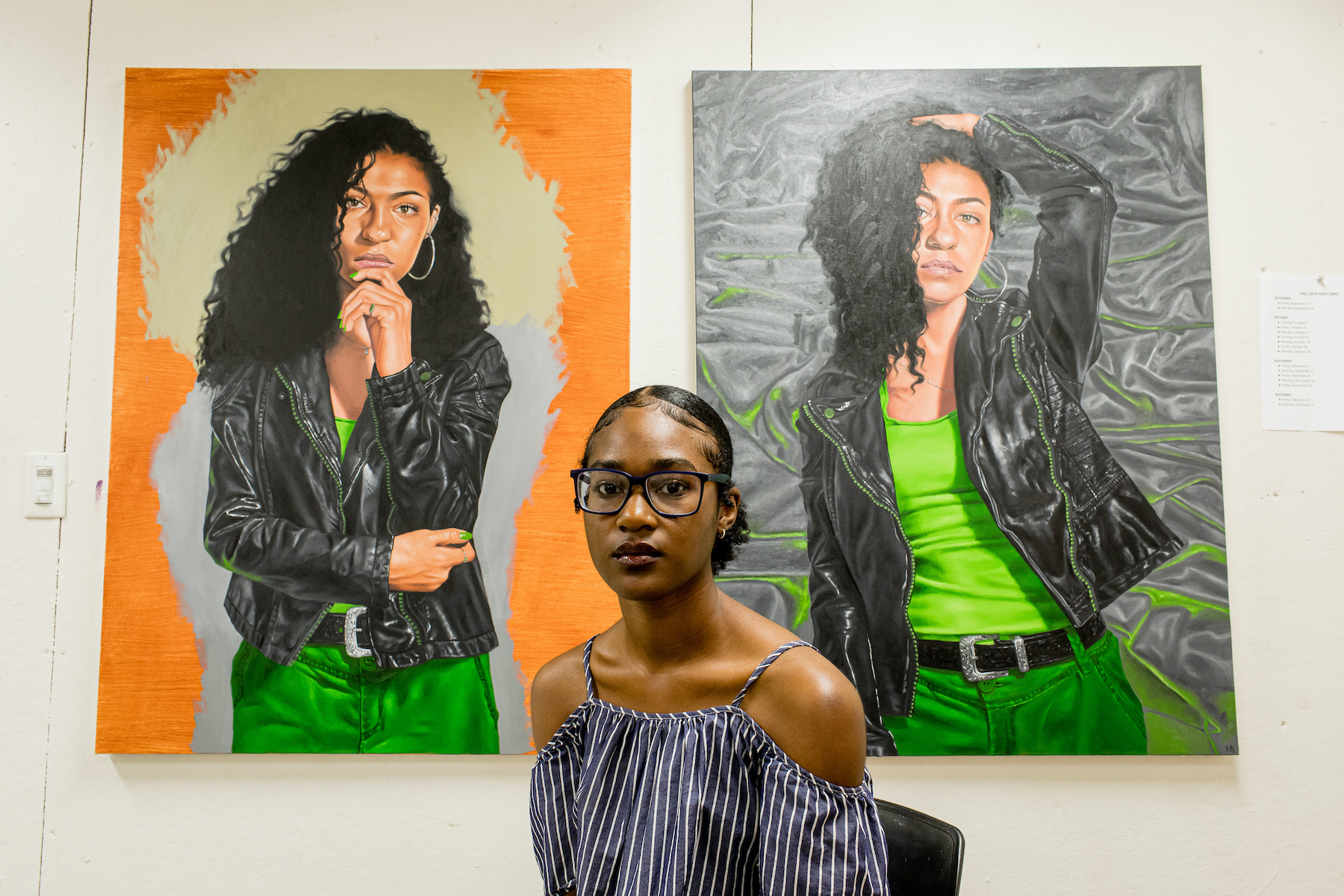 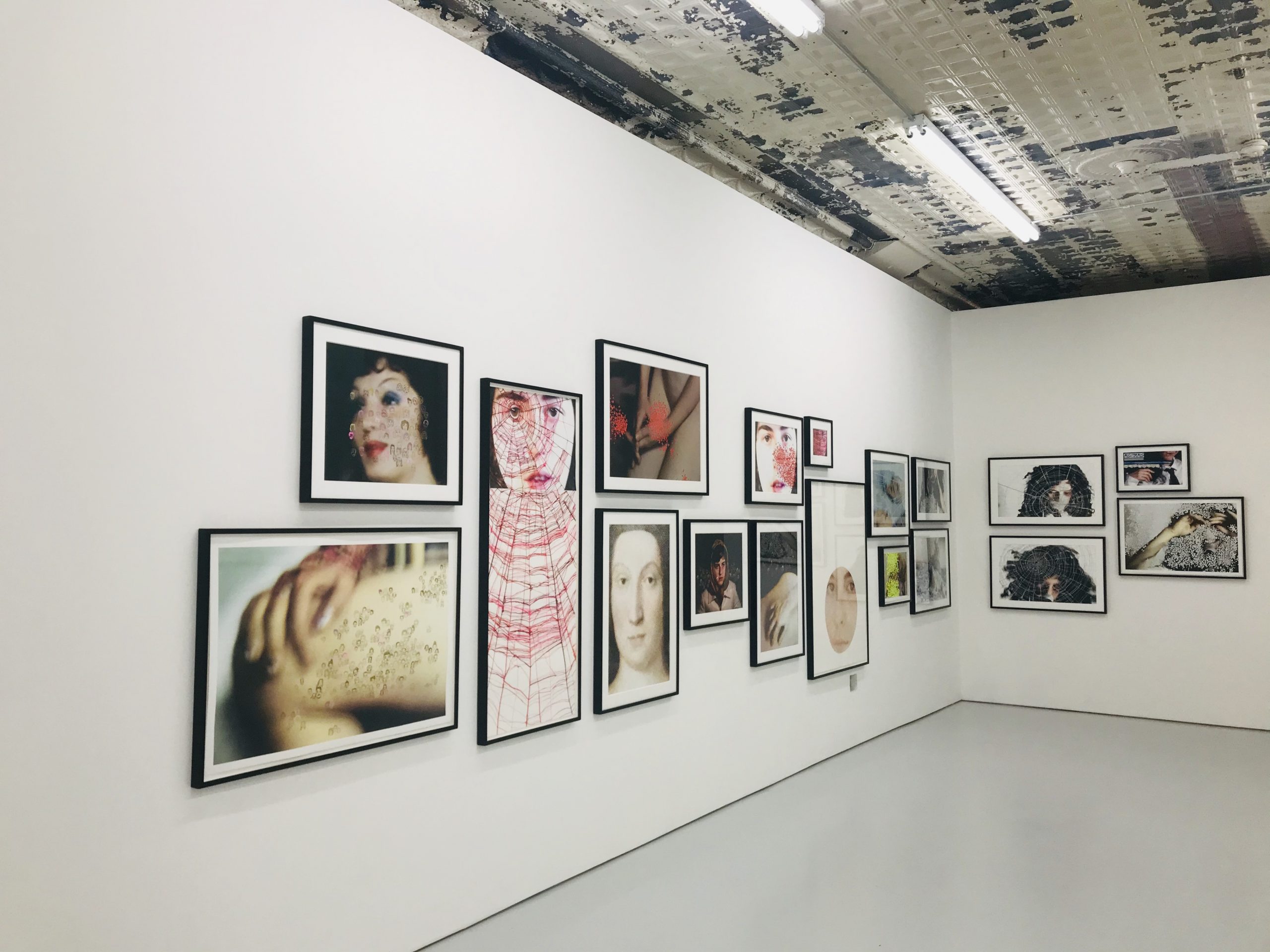 I was first floored by a Karen Yasinsky film at MICA’s Falvey Hall back in the aughts. After the screening I stopped her in the aisles and inarticulately gushed, “I love your movies.” Perhaps I was rapt by “Le Matin,” her hand-drawn reflection on Jean Vigo’s legendary film L’Atalante, or perhaps it was her visionary puppet animation “Who’s Your True Love?” I wanted to have a more astute observation to share with her, but words failed me. I was still reacting to what she had shown me. How can we even expect language to describe work that decidedly finds so much power in the realm of the non-verbal?

Yasinsky’s wordless power has only expanded in the ensuing years, and her new show at Resort, One Night Only, explores the visual languages of silent film stars and stand-up comedians. Across the three films and numerous still images, Yasinsky’s lens is focused on Aidan, an actress and video artist who has been Yasinsky’s primary subject and collaborator since 2018. In counterpoint, One Night Only is interspersed with details of Paul Outerbridge’s infamous studio nudes, rephotographed and altered by Yasinsky. Outerbridge’s pioneering color photography provided an early influence for Yasinsky, and her interventions play with both the sensuality and distance of the source images. Throughout the show, Yasinsky’s still images are self-detourned with cobwebs, cartoon heads, and brightly-colored dots.

One Night Only—Yasinsky’s first solo show in Baltimore—is on view at Resort through January 17. Related works will be in a show at Jeffrey Deitch Los Angeles curated by Laurie Simmons and Dan Nadel opening Feb. 8.

Rahne Alexander: I’ve followed your work for so long and it’s so satisfying to see a solo show from you in your hometown! How did the concept of this show come to you?

Karen Yasinsky: I hadn’t had a studio for a long time and so I got a studio, thinking, I want to get back into drawing and painting instead of just working on films and animations. I was doing films with Aidan and then I started taking pictures of her and using film stills and those turned into the works on paper. But I tried to start painting again, and I realized I didn’t want to do that.

How long had it been since you had been painting?

I think of how Carolee Schneeman began as a painter and maintained painterly discourse in her work, even after she moved on to film and performance.

I just love the history of painting. I love portraits and a lot of 16th-century Dutch painting, so it makes me want to paint. But when I’m trying to paint again, I realize I really don’t like painting. When I paint, I find something, and then I have to destroy it and fuck it up and then recover something. And when I look at my works on paper, they look so pristine.

When I first started painting, I went to this really conservative school, the New York Studio School, and they always said, “Find the form,” so it’s like you’re touching to find the form with your hands. But I thought, “Your eye is the hand,” and your eye is touching what it can see, and that’s why I love portraiture. When you see somebody looking at you, it’s like you fall in love with them. It’s incredible.

I think it’s so interesting then that you put a layer of self-detournement interference between your images and the audience; your cartoon heads, for instance, create a kind of audience looking back at the viewer who is trying to look at Aidan.

I don’t really care that much about the image when I’m painting and I don’t have an idea what it’s going to be, and so I usually copy a painting that I like, and it’s always a head, a face. And that’s the other thing—I realized I get obsessed with certain people. And why not just work off of that image that I already know I like, instead of working from nothing? At the opening, Tom Boram pointed out that I was obsessed with Elliot Gould for a while and then it was Anne Wiazemsky, the actress in the Bresson films. There were three movies with her. And then it became somebody I knew, which was nice.

From these works, it seems to me that Aidan is an especially engaged collaborator.

The first thing we did together was “I am the Grass and I’m Gonna Cover You Green.” In that she’s looking at a silent film called Satan’s Rhapsody, with Lyda Borelli who is this expressive silent film diva, and she’s supposed to be sexy and it’s so hyperbolic and over the top. It’s not a language that we associate with internal emotions now because it’s so put-on and plastic. So I said, ”Watch this and interpret it. You don’t have to copy her.” I asked her if she was nervous, and she said, “Yes.” I said, “Okay, I won’t look.”

With the “One Night Only” film I said, “You’re a stand-up comedian, but you can’t talk. Here’s your prop, it’s a glass of water, and you have a microphone.” And that’s all I told her. I didn’t direct at all. I would wind up the Bolex and look away, so when I get the footage, it’s like found footage.

To my mind, your third film in the show really closes the loop in this show, merging Aidan’s performance with a bit of Gene Wilder’s iconic performance in Young Frankenstein. Not only is Wilder such an amazing physical comedian, he’s got that silent film star deportment; and then you’re reanimating it through rotoscoping. I can’t help myself: I want to call it “self-detourn-imation.”

Yeah, that was the most recent one. I have more—that’s the looped fragment for the show, but that’s going to be part of a longer movie. I’m still working on it. I’m filming more of Aidan in the theater, and so it might be that she goes to the theater and watches the animation on the screen, so they might come together in one film.

That’s exciting—we’re getting sort of a sneak preview! But I guess that gets at one of the phrases that struck me from your show description, “postponing completion.” How do you know when you are done with a piece?

With films it’s often a deadline. And then sometimes I show them at film festivals, and then at the festival I realize, “Oh, this isn’t done.” And it’s nice because I can change it. It’s my work. As I get older, it’s about process. It’s not at all about the finished thing. But at the same time I want it to be finished, and I want it to come to a state where it doesn’t need anything else and mostly nothing bugs me, and where I feel like something’s happening that surprises me—and it’s usually something I never could have thought of at the beginning of the project.

Tell me more about how the Paul Outerbridge elements of this show. It’s so interesting that with all of his commercial success, these nudes were suppressed and largely unseen in his lifetime. At first it seems like such an odd juxtaposition to the works you’ve done with Aidan.

I’ve always been obsessed with his work and I came to his work when I first thought I want to be an artist, so I think it’s one of my first loves. When I started to have an identity as an artist, I worked in a gallery that had his estate, and his work was unlike anything I’d seen, sort of like Technicolor films, and his nudes—there was something that reminded me of one of my favorite painters. There’s a real coldness to the surface of the skin, and you can see the veins underneath the skin. There’s a real eroticism, and I like thinking about how these nudes are performing.

Your manipulations of the Outerbridge nudes begin with you focusing on details of the originals, which you then rephotograph, and of course I can’t help but associate that practice with how John Waters photographs his television, albeit to very different effect. 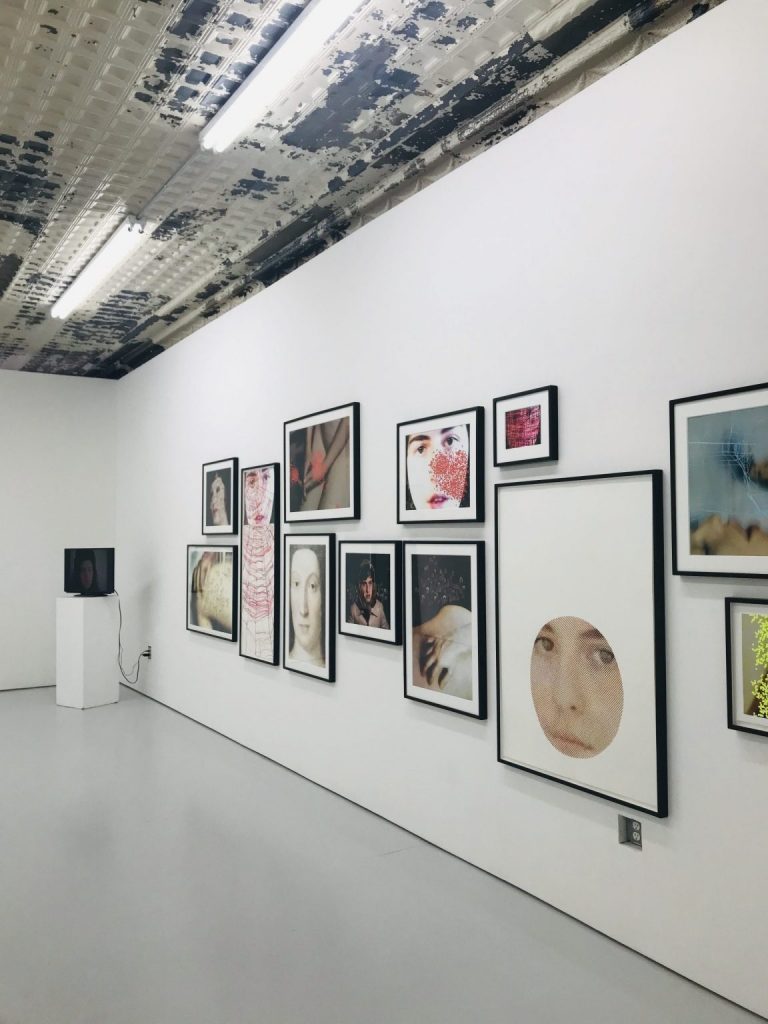 Well, I think John Waters is really different from me, but I just love to get into my obsessions, and I don’t think about what it means. I don’t think about how I’m going to talk about it and what the subject is, I just go after it. I just started to photograph my favorite parts of the screen. If I reshot the whole photograph, there’s no mystery to it. There is mystery to Outerbridge’s work, but it’s not my mystery. I really like working with close-up fragments and I really have no interest in the space or context of the image.

It’s like you’ve got an almost confrontational model, which makes me self-conscious, wondering what you are doing to me as an audience member.

I want to touch you. I was at the National Gallery in London a few years ago, and I hadn’t been there for a really long time. That was another place where I sort of came to life as an artist. So I went back and looked at all my favorite paintings, the Rembrandts, Bronzino. I was looking at them and I really freaked out and started crying because they were looking at me and they were alive. And that’s why I love silent films, too; when these people—they’ve been dead for so long, but they’re still alive and they’re still moving me and making me feel things. So it’s weird because even though I feel like I don’t want to put expression in the films, I definitely want expression to come out of them. I want you to experience expression.

One Night Only is on view at Resort through January 17. Photos by Cara Ober