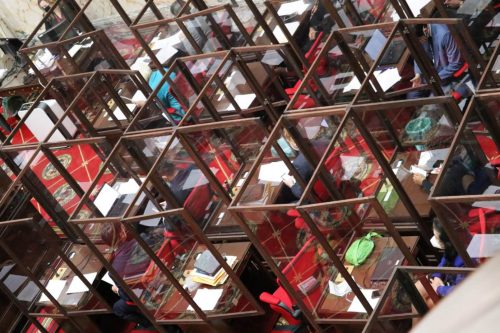 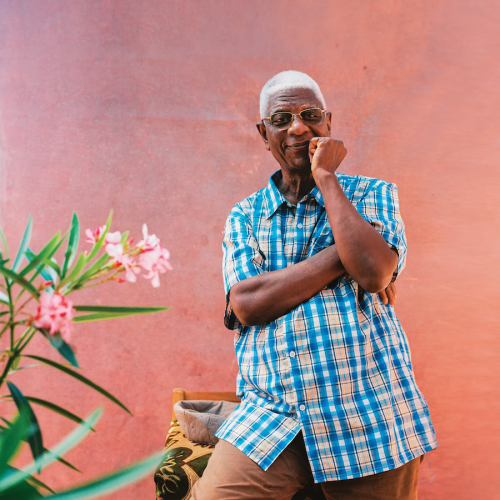 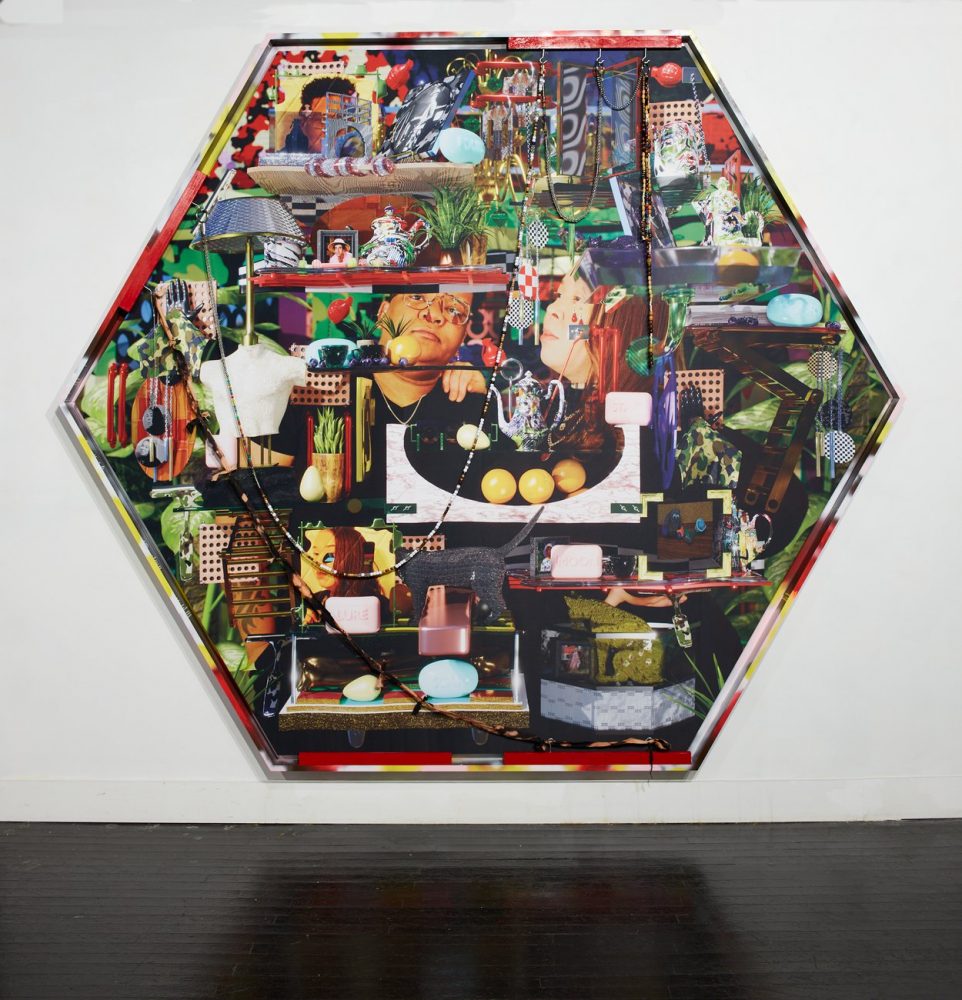 If you have spent significant hours on Myspace, Tumblr, Vine, Twitter, or the like, then the “torrent of content” that artist duo Wickerham & Lomax describe in their newest work feels familiar. Those platforms formed our sense of self or, at the very least, allowed us to create and then re-create some aspect of ourselves. The divide between the digital and the real no longer exists, as curator and writer Legacy Russell explores in her newest book, Glitch Feminism. We are plugged in at all times, whether we’re conscious of it or not.

At face value, Domestic QT and The Spatial Anomalies, an exhibition of Wickerham & Lomax’s most recent work at von ammon co in Washington, DC, traces the creation and consumption of this endless tide of content that has come to define our relationship to a digital world—an ordered simulation of reality.

Framed within rectangular or hexagonal canvases and gym-like apparatuses, the work features a variety of both common and uncommon household pets; an emphasis on disembodiment and distortion; gravity-defying orbs and spheres; and alluringly slick surfaces, such as the text “SWIM WITH” in the work “Nymph and the Net” or the mercury-like liquid imposed on “Romance as Intrusion.” As viewers, we are contending with not only the sheer amount of content we view on any given day, but also how we do or don’t make sense of it.

The pitfalls of our struggle to integrate the “real” and the digital is an important subject, but what is more intriguing in Wickerham & Lomax’s work is their critical examination of how we experience, interpret, and assign value to everything in and around us. The exhibition, which explodes with images of household objects and people within often hyper-flattened interior spaces, is framed as a “gravitational field” of signs and symbols in which our relationship to the production of meaning is precarious by design.

Our worlds and environments are all relational, and we form meaning by way of the dialectic between objects. For example, dog bowls filled with fake fruit and epoxy-covered ice cubes—presented to us in several of the more sculptural, freestanding pieces in Domestic QT—are divorced from our assumed understanding about the use and function of dog bowls. It is through this divide that we discover new ways of organizing logic and discomfort.

While neither simply dystopic nor utopic, the artists’ intentional disinterest in a transparent logic opens space for rethinking our sociopolitical lives, much like how daily life under COVID-19 has forced us to reprioritize our time, energy, and desire for connection and intimacy. In the freestanding work “LOGAN TERI MALCOLM 2020,” which depicts a squashed, collaged domestic kitchen space, the numbers on the hand-drawn clock in the upper right corner are falling off, falling out of their numbered sequence, and resisting any notion of cyclical time. The circle and numbers are reminiscent of a clock, quite surrealist in its approach, but it would be futile to attempt to rely on it as such.

A window in the upper left corner is open, but to where we are unsure. We can identify a monstera plant peeking through; however, the negative space within the window frame seamlessly incorporates both the image’s constructed space with the actual space the work occupies—the gallery’s white brick wall is visible through the transparent plexiglass upon which this scene is printed—calling attention to a collapsing of the two. The window is simply a window into the world we believe we already occupy.

Both the clock and window precipitate a growing chorus of challenges to our understanding of linear time and the ways in which capitalism, heteronormativity, and colonialism alter our reality. How does our socialization into being a productive worker under capitalism color our notion of how our life ought to unfold? Is our growth biologically or culturally determined, or both? Do you simply transition from childhood to adulthood? The work we are often called to do on our inner child, I think, would beg to differ.

With so much reordering comes a level of discomfort, a possible frustration for some who may view Wickerham & Lomax’s work as hard to read or enter. While this feeling is palpable at times—even when considering the artists’ glossary of terms that serve to support the signifiers within the work—possibility remains. In the work “Janet Choi,” our perception for depth, foreground, and prescribed height are untethered. Disembodied fingers and figures populate the surface. The bottom portion of the work is boarded over, insinuating a need to cover up or protect—and I cannot help but correlate these gestures to the countless businesses and physical spaces that boarded up their windows and storefronts during Black Lives Matter protests around the country, a truth laid bare about this country’s valuing of property over human life.

This uneasiness lays the groundwork for dismantling and rethinking our relationship to both public and private spaces, the domestic, our bodies, the collective body, and order itself. A statement about the exhibition describes the work as “a machinic transformation or a system-wide breakdown.” From this point of departure, we see clearly that discomfort is the foundation of growth. We cannot envision new ways of being without leaving the solace of our current logic.

It is no coincidence that Domestic QT traffics within a speculative, science-fiction sensibility. Wickerham & Lomax tap into absurdity and surreality to dissect our believed truths. Portals—particularly the six-sided canvases including “Lindsay Brien” and “Nymph and the Net”—that recall futuristic doorways are presented to us as pathways to different worlds. Science fiction provides space for a radical rearranging of the senses. I think of works such as Mary Shelley’s Frankenstein, Octavia Butler’s Kindred, and 18th-century queer writers who gravitated towards the genre for its inherently resistive nature and as a way to embed their visions of new worlds while evading detection or persecution. Wickerham & Lomax push us to not only question that which exists in and around us, but to touch it, feel it, reshape it, dismantle it, pull it apart, and put it back together again.

Domestic QT and The Spatial Anomalies is on view at von ammon co through January 17. It is also viewable online.