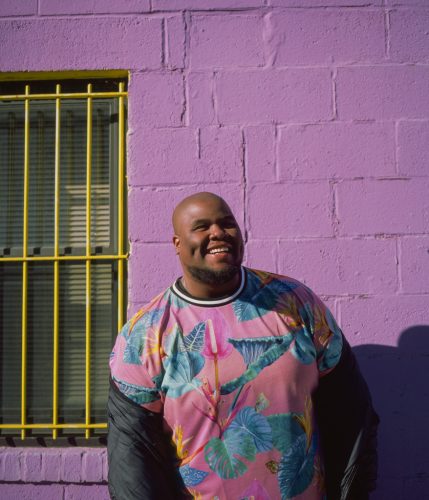 A Photographer Captivated by Baltimore Musicians 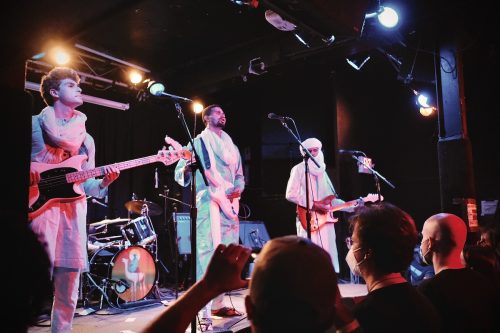 Soft Revolution in a Free Guitar Rhythm: An Inter [...] 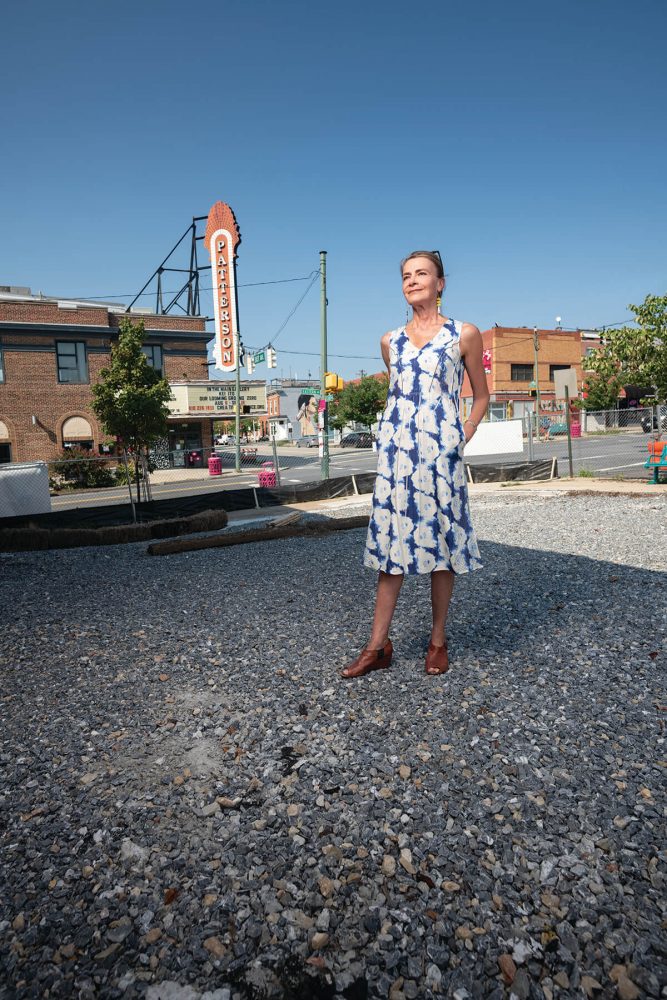 Excerpt: They dub it “a year-long, high-impact experience” – a leadership program established by Harvard University, using money from Michael Bloomberg, for mayors from around the world.

And Baltimore’s own, Brandon Scott, is now enrolled.

Today was his third day in New York City, attending the inaugural classes of the Bloomberg Harvard City Leadership Initiative, before heading back home tomorrow.

Scott joins 37 other mayors who will undergo “immersive classes of cutting-edge training” taught by staff from the Kennedy School of Government and Harvard Business School.

While Baltimore is periodically written up in the same vein as Austin or Portland (keep it weird), locals know that the city is, caricature aside, deeply urbane but suffused by spectral energies. CPM is the first space that seems to crystalize that energy: for as long as it operates, viewers will never quite know what to expect. In Smolkin’s words: ‘I think creativity and name-ability are opposing forces: the people I admire most are shape-shifters.’

Excerpt: Larry Hogan is going national, using his cred as a popular blue-state Republican to help other GOP candidates ahead of a potential 2024 presidential bid.

The Maryland governor, an outspoken critic of former President Donald Trump, is lending his help to Republicans in states filled with suburban voters who bolted the party during the Trump era. Over the past few weeks, Hogan has campaigned for Virginia gubernatorial hopeful Glenn Youngkin and Georgia Gov. Brian Kemp. This weekend, he was the keynote speaker at an Amelia Island, Fla., conference hosted by the moderate Republican Main Street Partnership.

And next May, Hogan is set to speak at the Ronald Reagan Presidential Library & Museum’s “Time for Choosing” series focused on the future of the Republican Party. The forum in Simi Valley, Calif., has drawn an array of would-be presidential candidates, including former Vice President Mike Pence, former Secretary of State Mike Pompeo, and former New Jersey Gov. Chris Christie.

Excerpt: With the General Assembly likely to approve a marijuana legalization bill next year, advocates for entrepreneurs of color are taking steps to make sure the state’s future pot industry is as diverse as possible.

The association, an Annapolis-based non-profit, will “serve as the voice for minority businesses to guarantee opportunity, education, and equality for the communities devastated by the war on drugs,” the pair said in a press release.

A House of Delegates workgroup created by Speaker Adrienne A. Jones (D-Baltimore County) met earlier this month to begin planning for the potential legalization of marijuana for recreational use. Currently pot is legal in 18 states and Washington, D.C.

Jones wants a 2022 voter referendum on the matter.

Excerpt: The transition to in-person learning this fall has not been a smooth one for Maryland’s school systems.

There are nearly 900,000 students enrolled in Maryland’s local school systems.

The state board reviewed this data at its meeting Tuesday, which was self-reported by local school systems.

State Superintendent of Schools Mohammed Choudhury said the state should have shown stronger leadership a long time ago. Choudhury became superintendent in July.

More than 17,000 Students Across the State Have Quarantined This School Year
by Elizabeth Shwe
Published September 29 in Maryland Matters

Excerpt: In July, a colorful shovel, decorated in purple, teal, and gold, hit the dirt at the empty lot across from Highlandtown’s Creative Alliance. It was a long time coming. The beloved arts nonprofit bought the building that used to be on the southwest corner of Eastern Avenue and South East Avenue six years ago, then razed the former bar.

Now, work is finally beginning on what will become the Creativity Center, a new Creative Alliance space that will expand both the organization’s footprint and community impact.

The center, which is slated to open in the fall of 2022, will include a number of new spaces and opportunities for cultural learning. A 1,000-square-foot professional dance studio, professional teaching kitchen, and several new classrooms will give all ages access to expanded resources, in addition to the classes, performances, and exhibitions available across the street in the Patterson Theater building.

Chronology of a historic preservation fiasco in the heart of Mt. Vernon
by Mark Reutter
Published September 25 in Baltimore Brew

Excerpt: Last April 21, a citizen complaint was received by the Baltimore Department of Housing and Community Development: “Building in a state of collapse.”

It referred to conditions at 1001 North Charles Street, the former “Grand Central” nightclub in the Mt. Vernon historic district, where a contractor had stripped away the interior of the building, leaving only two skeletal brick walls.

Going to the site, the inspector was met by project manager George Sarkes, who assured him that his employer, JP Porter Construction, “had already addressed the collapse of 1001 North Charles. . . however, they began to experience failures in the shoring/bracing of 4 Eager.”

Sarkes said his builder was “backfilling that area” with dirt, but was “awaiting an engineer’s report before continuing work on 4 Eager.”

Satisfied, the inspector closed out the complaint the same day. He took no further action except to note that “all of the properties are affiliated with the same LLC – Landmark Partners.”

The inspector’s report – disclosing how the city considered and then ignored a complaint about dangerous conditions at the site – is just one of many documents and interviews that The Brew has gathered to reconstruct the timeline of a major historic preservation fiasco.

Excerpt: Audrey Bergin was shocked when she saw a yellow postcard in her mailbox informing her that if she did not respond to a jury summons questionnaire, she faced a $1,000 fine or even jail.

The warning was the first she heard about a summons.

“That was kind of concerning,” said the Hampden resident, “and led me to think, ‘what else are we not getting in the mail?’”

Bergin is among a legion of Baltimore-area residents who continue to report lost or delayed mail more than a year after a controversial Trump-era official began major changes at the United States Postal Service. Mail delivery in the Baltimore region continues to lag the nation and is so poor that the USPS inspector general has launched a targeted investigation. Federal and local political leaders are grappling to address the concerns of their constituents and point to staffing as a major contributor.

“There’s definitely an issue,” said Bridget Miller, also of Hampden. “That’s mainly why I changed everything over, like my bills and stuff. I was scared I wasn’t going to pay one. So, I get them either emailed or they take it out of my checking account.”

USPS Names New Postmaster for Baltimore, Home to Some of the Slowest Mail Delivery Rates in Country
by Danielle E. Gaines
Published September 29 in Maryland Matters

Excerpt: This might surprise people that have seen or heard one of Jimmy’s Famous Seafood’s attention-grabbing marketing campaigns or follow the Dundalk restaurant’s pervasive and often brash social-media content. But John Minadakis, Jimmy’s 38-year-old co-owner—and the son of its late founder and namesake—says he considers himself a social recluse.

“I’m a bit of a hermit myself,” he says softly over lunch one day at his restaurant, before he forks into one of his eight-ounce famous crab cakes.

We’re sitting at a high-top table near the dining-room bar, masks off, finally, one afternoon near the end of April. And ironically, as we eat and talk, Minadakis is cracking open his own shell, so to speak, to talk about the Famous Fund. It’s one of the city’s more uplifting stories of the past year, and Minadakis—who owns Jimmy’s with his younger brother, Tony, both second-generation Greeks—is the guy behind it.

Since January, the Fund—essentially a crowdsourced fundraising effort—has raised roughly $480,000 (and counting) that’s been split among dozens of restaurants and bars across the city that were decimated by the pandemic and the ensuing social-distancing protocols that left stools, seats, and tables empty for months.

Battleground Baltimore: The Fraught Past and Future of Violence Reduction
by Jaisal Noor and Brandon Soderberg
Published September 24 in The Real News

Excerpt: During the first Group Violence Reduction Strategy meeting on Monday, Sept. 20, Mayor Brandon Scott acknowledged the previous failures of the very same strategy—first by former Mayor Kurt Schmoke in the late ’90s and then by former mayor Stephanie Rawlings-Blake in 2014.

This time, however, the program—which involves 75 different organizations in the city and is central to Scott’s crime plan—is going to work, according to Scott. At the center of this strategy is “focused deterrence,” an approach that involves telling “at-risk” people believed to be involved in many of the shootings in the city that law enforcement is aware of what they’re doing and encourages them to stop while offering resources to help them do so.

Excerpt: Cecilia Fenwick has been on home detention for nearly 90 days and the fees associated with her electronic monitoring services have put a strain on her wallet.

“July the 1st, I was released from Baltimore County Detention Center and ever since I’ve been paying my home detention, every piece, every few weeks,” she said during a phone interview Wednesday.

Fenwick was referred to the Baltimore Action Legal Team (BALT) to help her pay up to $243 for her home monitoring service every few weeks.

Iman Freeman, the executive director of BALT, said the program Fenwick joined was launched after a public defender reached out to see if BALT would allocate some of their bail funds to help a client afford home detention at the beginning of the pandemic.

“We started with that client and then, eventually, it ballooned into something that we were not prepared for,” Freeman said during a phone interview.