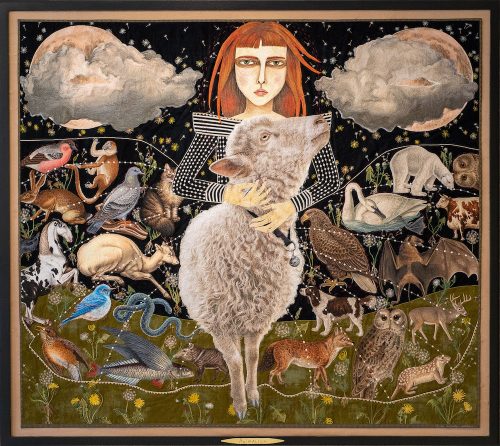 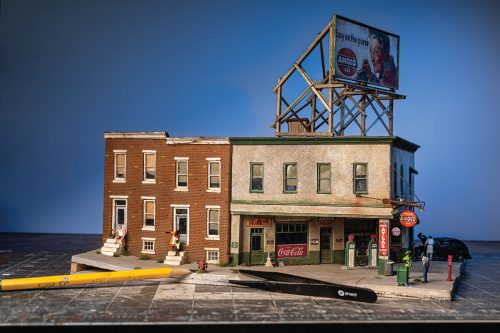 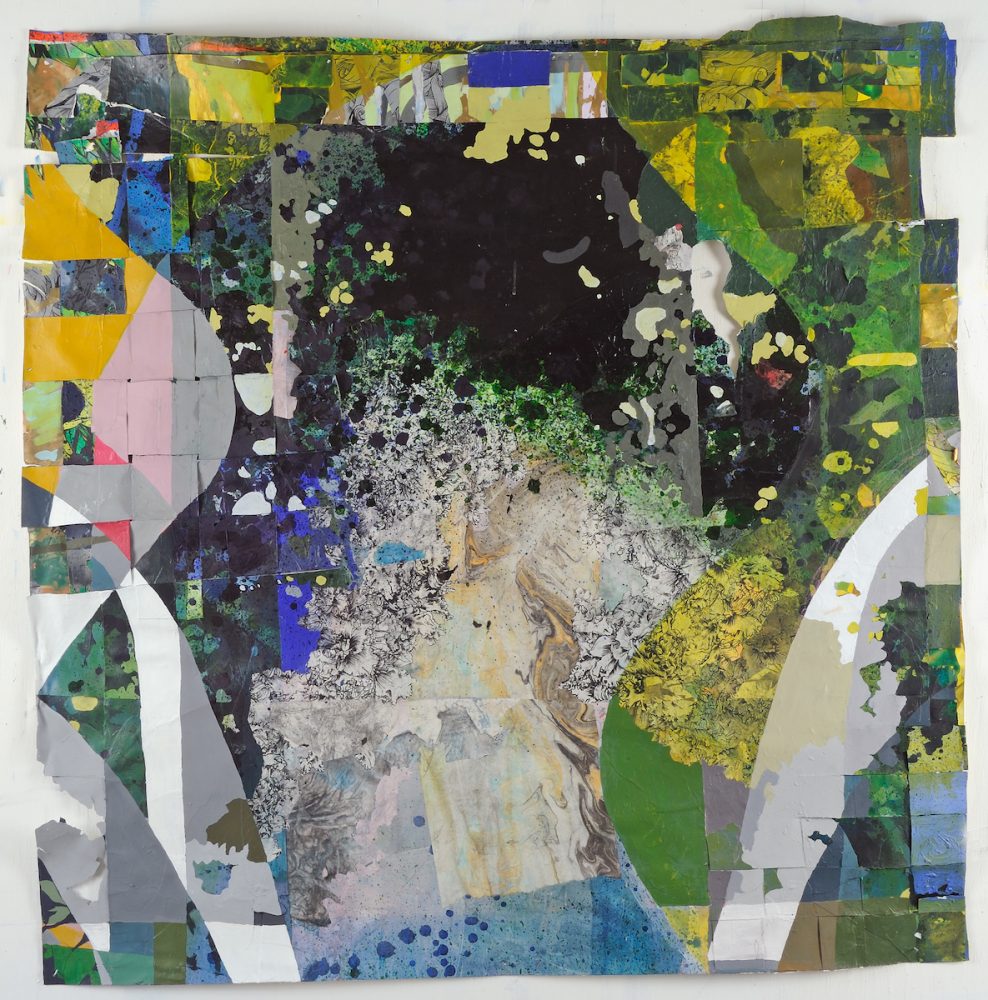 Collage can be loosely summarized as the coming together of contrasting elements to make a new whole. Bold colors or patterns are pushed up against representational forms to create a world that doesn’t adhere to the laws of gravity or perspective. We recognize this in the 100-year-old canvases of artists like Pablo Picasso, Georges Braque, and Juan Gris (who currently has a show up at the Baltimore Museum of Art). Perhaps because of these origins of collage, it’s especially notable when a contemporary artist combines elements of themselves in their work, not just material from the world around them.

Katherine Tzu-Lan Mann’s wall-sized collages and installations rework and play with her own life and history, visually summarizing the collision of her upbringing. Moving every two or three years through Asia, the US, and the Middle East as the daughter of an American foreign service officer father and a Taiwanese mother, homemaker, teacher, and graphic designer, Mann first dabbled with traditional Sumi-e ink techniques as a teen but didn’t learn to speak Chinese until college.

In her work, Mann simultaneously combines Eastern and Western influences, using extremely old mediums such as Sumi-e ink, invented in the first century AD in China, and contemporary ones such as Yupo paper, a plastic paper that is popular with water media artists because it repels water instead of absorbing it, allowing ethereal shapes that recall their watery origins to dry slowly.

In her practice, Mann creates space for herself to exist as a biracial person, something she says is a “lifelong struggle and burden” of constantly feeling out of place. The traditional Asian painting traditions are not fully hers, she feels, and neither is the thorny history of Western landscape painting, which is inherently tied to imperialism and colonialism. In her studio in the DC studio complex STABLE, Mann has both a well-worn Thomas Moran book and a similarly battered book of the Buddhist Mogao caves at Dunhuang, China, within arm’s reach. A self-identified landscape painter, she draws upon both histories of painting place, relating to her ancestors, who she describes being “destroyed by colonialism,” and the undeniable beauty of the work of the Hudson River School, problematic as they are.

I first saw a solo show of Mann’s work at Goucher College in 2015, and over the six years I’ve been admiring it since, it has become more chaotic, more layered, and, as Mann sees it, “more fragmented.” The pandemic caused great personal loss for the artist: Two of her grandparents passed away, one from COVID-19 and one most likely from pandemic-induced confinement. But it has also caused her to rethink the way she works. She also connects the start of these internal shifts to parenthood (she is the mother of 4-year-old Mae and 6-year-old Calvin), which has caused her to grow more accustomed to taking risks in her art and being less rigid.

Many of the works in her current solo show, Water Ribbon, at DC’s Morton Fine Art (up until October 6), are a record of the last eighteen months, when Mann took care of her children during the day and worked for long chunks of the night in her studio. “I’m going to look back at the pandemic as this time of immense grief and loss,” she says. “But also, I’m going to look back at it as a time where I became much more connected to my kids.”

Before having children, Mann was a regular on the DMV college-adjunct circuit. Since having her son and daughter—and especially since the pandemic forced her to become a “preschool student” of immersion Mandarin (to support her daughter’s education, she says, laughing)—she and her partner have worked out a system where they split childcare and Mann is a full-time artist. Her ability to support herself with art sales and commissions speaks to her talent, but moreover, it is evidence of her work ethic.

Coming out of MICA’s Hoffberger MFA program in 2009, she knew that there were not going to be galleries knocking down her door to work with her. Instead, she focused on open calls and began what has become a constant practice of sending out applications. The results have basically been a snowball of opportunities over the last twelve years.

“I applied to the Hamiltonian fellowship after grad school and when I got that they brought my work to art fairs,” she says. “A gallery saw a painting at an art fair and picked me up after I was finished with the fellowship. I was lucky that happened, but I did apply to it to begin with.” She also got good at accepting rejection and moving on.

This is not to imply Mann’s career has been without its professional challenges—she began to pursue public commissions because of a bad business deal. When she was pregnant with her son six years ago, she had gallery representation in New York, London, Los Angeles, and Toronto—an enormous professional milestone for many. And then, seemingly without warning, all but the Toronto gallery went out of business, one going bankrupt while owing Mann a substantial amount of money for works that had been sold. “It felt like, oh, you achieved this goal that you’re supposed to have in the art world. And then you ended up worse for it,” Mann says. “It felt like this lack of independence, a lack of freedom on my part to have control over my own destiny because all of these other people were players.”

But Mann isn’t dwelling in the past, and is instead focusing on ways to evolve her studio work alongside the large-scale commissions. For the works in her show at Morton Fine Art, “there was more bold cutting into forms and it’s a little bit more aggressive,” she says. “Whereas before, I was thinking about building these bodies and having these additions onto the bodies.”

Weathering this season of loss, Mann sees a “subtractive element” in her work where there had previously been additions, focusing more on “sharply cutting into forms to take things away and confuse the negative space more. What is negative space is not as apparent now as it was.” Where earlier collages focused on contrast, in the new works made in 2020, collage is becoming camouflage.

A single completed painting contains many “failed paintings,” Mann says, which have been recycled and pasted into new works, creating an overall “hybridity” that she is seeking. She works on paper, first laying it down on the floor and pouring ink onto it, and then pinning it to the wall so she can paint and collage in an immediate manner, responding to previous marks and allowing her plans to change as the work develops.

Contrary to the traditional emphasis on sketching in art school, Mann doesn’t create sketches first unless working on a commission for a client. Her process-oriented works begin with an ink pouring, which “provides the rest of the direction of the future of the painting.” The resulting works are layered and confusing to behold because they seem to move constantly between flat and textural areas, a phenomenon that Mann recognizes from her training in traditional Chinese landscape painting, which also emphasizes shifting perspective. Sumi-e painting can be thought of as a kind of meditation that follows an extremely specific order of brush strokes to create such classical natural subjects as bamboo, cherry blossoms, and mountains. The repetition of subject matter and method has found its way into Mann’s work; botanical and decorative themes such as flowers and undulating bows have been motifs since the artist’s graduate school days. Over time, she feels that these symbols “take on a new form, new meaning, or become kind of diffused in their original meaning.” And for this reason, she returns to them, playing with how to make them over again.

Like most of us, it seems Mann is entering the next phase of the pandemic with a new acceptance of herself and her work. She no longer tries to explain away the inherently pleasant nature of much of the patterns, colors, and compositions of her work. “I originally felt like it was a flaw in the work that it was beautiful and therefore not serious,” she says. “I’ve come to not apologize for that.”

She believes that the concept of beauty as trivial comes from the male and Western tradition of Abstract Expressionism, which she butted up against with Grace Hartigan, then-director of Hoffberger, in her first year of graduate school. Mann recalls Hartigan telling her that “pattern tickles the eye but does not touch the soul,” which was hard for her to move past. Mann began purposefully working with symbols of beauty to address this critique and in “acknowledgment of beauty and girlhood,” she explains. After the pandemic, it’s hard to really see the pursuit of pleasure as a problem.

All images courtesy of the artist and Morton Fine Art. Installation views by Jarrett Hendrix