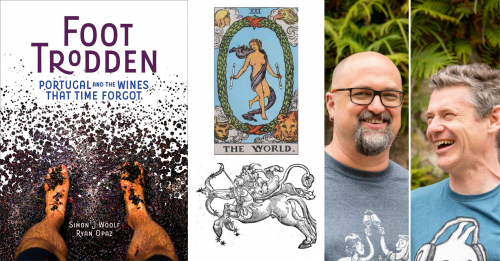 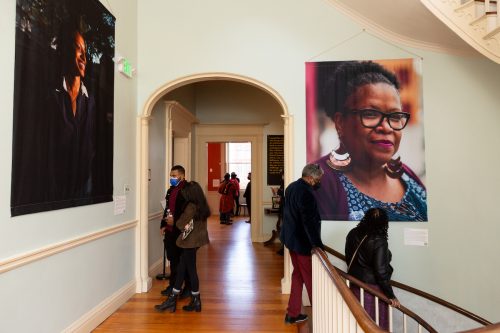 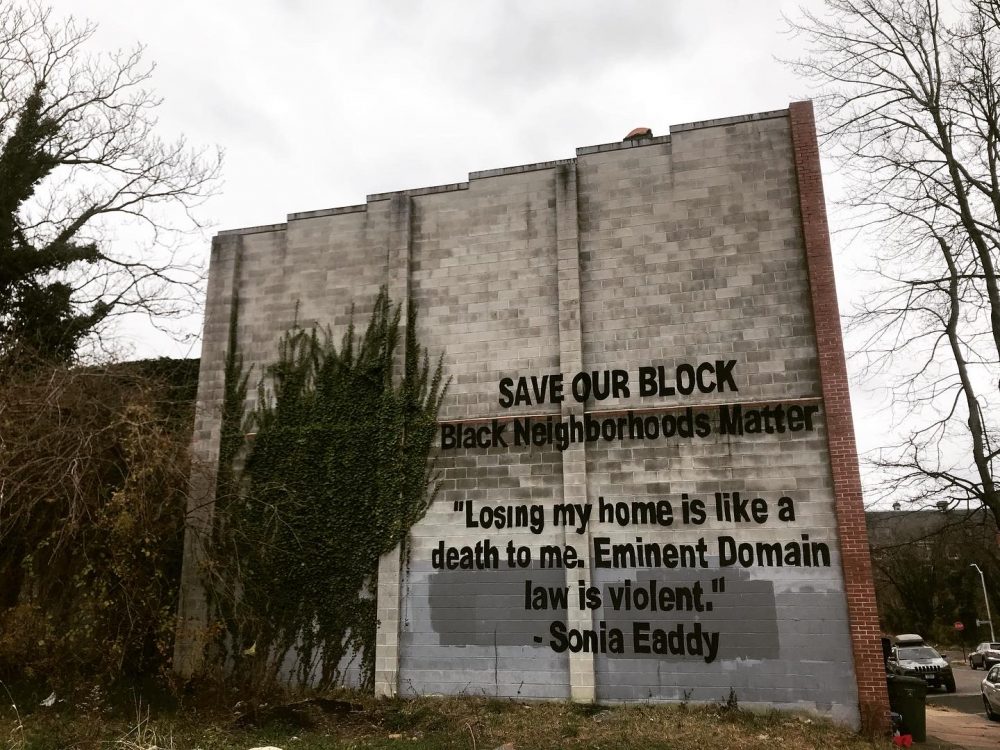 ‘Eminent Domain is Violent’: Poppleton Residents Show the City What Development Looks Like for Black Baltimoreans
by Jaisal Noor and Brandon Soderberg
Published December 15 in The Real News Network

Excerpt: Residents of West Baltimore’s Poppleton neighborhood gave city officials a tour of the overgrown, trash-strewn lots and the mounds of rubble that have come to define their historically Black neighborhood after more than a decade of supposed “revitalization” from well-connected, out-of-town developer La Cité.

The residents who organized the tour are fighting the city’s use of eminent domain to remove them from the homes they have lived in for decades.

“I want everyone in Baltimore to see what eminent domain is like,” said Sonia Eaddy, a third-generation Poppleton resident who has owned her home since 1992.

The house has been owned by Black families as far back as the late 1920s—a particularly impressive feat considering Baltimore City’s racist lending practices. Painted on the side of Eaddy’s 321 North Carrollton Ave. home is a 20-foot mural reading: “SAVE OUR BLOCK. Black Neighborhoods Matter. Losing my home is like a death to me. Eminent Domain law is violent.”

Excerpt: For neighborhood leaders trying to nurture local businesses that could help turn around Baltimore’s struggling Greenmount Avenue corridor, yet another “dollar store” is pretty much the opposite of what they want.

So they were deeply disappointed by news that Nashville-based Dollar General Corp., with 18,000 stores nationwide, is opening up a new one at 3133 Greenmount Avenue, the former site of a Rite Aid Pharmacy.

Waverly had just held its latest “Small Business Saturday” event to elevate the kind of locally owned, community retailers they want more of: relative newcomers, like Bmore Pasta and Urban Reads Bookstore, together with mainstays like the 23-year-old Herman’s Discount.

Last week, they learned that a local developer, who had bought the vacant building, had signed a 10-year lease with Dollar General – and neither community association heads nor Councilwoman Odette Ramos had been consulted.

Excerpt: Keith Davis Jr., who prosecutors have tried four times for the 2015 killing of a Pimlico security guard, turned down a new plea deal from the City State’s Attorney’s Office at a hearing Tuesday and now faces a fifth trial on the same murder charge.

Prosecutors offered Davis—who has remained incarcerated for the past six and a half years—a sentence of 50 years with all but 15 years suspended in exchange for submitting an Alford plea in the killing of Pimlico security guard Kevin Jones. In an Alford plea, the defendant does not have to admit guilt before the court, as required in a guilty plea, but acknowledges the state has enough evidence that they could be convicted. Davis has maintained his innocence in the controversial case since the charges were filed.

Prior to his last trial, prosecutors offered Davis a sentence of 50 years with all but 30 years suspended in exchange for a guilty plea. In a second case, involving a jail cell fistfight in which the State’s Attorney’s Office later charged Davis with attempted murder, prosecutors offered to suspend all but eight years of a concurrent 25-year sentence—and drop the attempted murder charge in exchange for submitting a second Alford plea. No weapon, according to charging documents, was ever recovered in that incident, and Davis rejected that plea, as well.

Hogan had six days to issue his veto, but he said in a news conference Thursday afternoon he did it quickly, knowing it would be overridden, so anti-gerrymandering groups could file suit.

“These gerrymandered maps will be challenged in both the federal and state courts,” he said. “These maps disenfranchise voters, they violate the Voting Rights Act, and they are in violation of numerous state and federal laws.”

In a blistering news conference, Hogan called the map, drafted by legislative analysts and adopted by a commission of legislative leaders, a “perfect example of the arrogance of power.”

Democrats Could Have Gerrymandered Away a GOP Seat. Why Didn’t They?
by Jim Newell
Published December 10 in Slate

Excerpt: In the late night hours following the Jan. 6 Capitol insurrection, Maryland Rep. Andy Harris found himself in the middle of a fight.

The hard-right member, and the only Republican in Maryland’s delegation, had spoken out against certifying Pennsylvania’s electoral votes during a debate on the House floor. Later that night, Pennsylvania Rep. Conor Lamb said in a speech that the Republican objectors should’ve been “ashamed” of their “lies,” especially after what they had seen earlier in the day. A shouting match, and then a confrontation in the aisle between the two sides, ensued, prompting the deputy sergeant-at-arms to get in the middle and break things up. The whole thing was defused before coming to blows, but Harris would later vote with 137 of his House Republican colleagues to uphold the objection. A couple of weeks later, after new security measures had been put in place at the Capitol, Harris was caught by security carrying a gun outside of the House floor.

This is a member of Congress whom Maryland Democrats, in complete control over their redistricting process given their state legislative supermajorities, had a chance to draw into oblivion ahead of the next election cycle. In doing so, they could not only have gotten rid of a representative Democrats consider one of the worst of the worst, but they could’ve helped the national Democratic Party counteract Republicans’ national redistricting advantage ahead of the 2022 midterms. Democrats have only a few states where they can play offense in redistricting, and Maryland is one of them.

And yet. When Maryland Democrats sat down to draw a new map, one that could have gone from a 7–1 Democratic advantage to an easy 8–0 shutout, they flinched. The map that the state’s General Assembly passed this week would make Harris’ district more competitive, but FiveThirtyEight still rates it as Republican-leaning, as does the Cook Political Report.

“We Know Nothing”: Lawmakers to Probe Attack That Took Down Agency’s Computers
by Bruce DePuyt
Published December 14 in Maryland Matters

Excerpt: Two legislative committees that oversee the Maryland Department of Health plan to grill state officials about an attack that disabled the agency’s computers, top lawmakers said on Tuesday.

Gov. Lawrence J. Hogan Jr. (R) has revealed little about the Dec. 4 attack, which has significantly hampered the agency’s operations.

Health department employees initially were told to stay off their computers as a precaution. Although some systems have come back online, the agency has not posted COVID-19 case rates, testing or mortality data since Dec. 3.

Hospitalization and vaccine data are available, as are congregate and school outbreak reports. Maryland is experiencing its biggest spike in hospitalizations since April.

“The governor has been incredibly quiet about this issue,” said Del. Shane Pendergrass (D-Howard), head of the House Health and Government Operations Committee. “The question of how it happened, why it happened, how bad is it — all of those things need to be answered.”

Excerpt: The Loyola School in Mount Vernon on Tuesday cleared a key hurdle in its quest to build a nearly block-long expansion, when Baltimore’s preservation commission approved a request to partially demolish three 19th-century townhouses to make way for the project.

Despite strong community opposition, and against the recommendation of its own staff, the Commission for Historical and Architectural Preservation (CHAP), voted 4 to 0, with two abstentions, to grant concept approval to a plan to tear down the rear portions of 104, 106 and 108 East Madison Street, part of the Mount Vernon historic district.

The vote means the school has support from the preservation panel to continue developing plans to construct its proposed expansion, even though it will require partial demolition of a currently-intact row of houses.

Amid food-industry upheaval, Baltimore businesses are handing workers the keys
by Lisa Elaine Held
Published December 13 in The Washington Post

Excerpt: On a recent fall morning, despite the chill in the air, workers at Taharka Brothers Ice Cream were packing a freezer truck and a van with pints of honey graham, peanut butter cup and pistachio. In the office, business metrics on retail performance, catering and home delivery moved across a screen on the wall. “It’s a really busy day,” said Detric McCoy. “Even right now, I don’t think I could run it by myself.”

He doesn’t have to.

In December 2020, Taharka officially became a worker-owned cooperative, and McCoy shares responsibilities that would typically fall on one person’s shoulders with four other worker-owners.

The structure has become almost commonplace among the city’s food businesses, whether they’re churning sweet treats, making vegan sandwiches or roasting coffee. In November 2020, popular pizzeria Joe Squared reopened after a covid-19 hiatus with 13 new worker-owners. This fall, the plant-based dessert shop Cajou Creamery also became a cooperative. And in early December, Union Craft Brewing announced it had added six longtime employees as owners and in the future would offer ownership to all employees after five years with the company.

Excerpt: In June 2021, leaders in Charlottesville, Virginia, put out an unusual offer: two bad statues, free to a good home.

The city council issued a request for proposals for statues of Confederate generals Robert E. Lee and Thomas “Stonewall” Jackson, which had long been the focus of removal efforts by local activists, and served as the backdrop for the deadly white supremacist “Unite the Right” rally in 2017. Despite the artworks’ ill repute, dozens of organizations and individuals expressed their interest in taking the disgraced monuments off the city’s hands, and the city received five formal bids.

Competition was steep: The Ratcliffe Foundation, which operates an historic home in Southwest Virginia associated with Confederate general J.E.B. Stuart, offered $50,000 to Charlottesville for the pair. The foundation also asked Richmond for all its Confederate cast-offs — protesters and lawmakers have removed 18 of these monumentsfrom the Virginia capital since June 2020 — in hopes of drawing tourists by relocating, restoring and preserving these relics in their original context as statues of men who fought to uphold slavery. But another group offered Charlottesville twice as much: The Los Angeles-based arts nonprofit LAXART bid $100,000 for both statues, with the hope of showcasing them in a major show of Black contemporary art next year.

Excerpt: Dr. Letitia Dzirasa was less than a year into her new job as Baltimore’s health commissioner in February 2020 when she spoke publicly for the first time of a deadly new virus that was metastasizing on the other side of the globe but which, as far as anyone knew, had not gained a foothold in the United States.

Shortly after the news conference, Dzirasa and her husband took a weeklong vacation in the Caribbean. By the time she returned to Baltimore, her top priorities, including the twin epidemics of violence and opioid addiction ravaging the city, were upended by COVID-19.

“I did a press conference on February 5th that probably no one paid attention to,” she recalled last week. “I remember coming back on Presidents’ Day and it was like, ‘Whoa!’ Between that third and fourth week in February, it became more obvious that this was going to be a big deal.”

She didn’t say it at the time, but she feared Baltimore was likely to be struck savagely by the virus. Baltimore is a majority Black city in a country with wide racial health disparities. It has a high poverty rate, a large population of immigrants with low incomes and densely populated neighborhoods full of thousands of workers without a work-from-home option.

On top of all that, Baltimore, like many U.S. cities and counties, has an underfunded public health system—with only about a third of the resources it needs, according to Dzirasa.

Header image: The message painted on the side of Sonia Eaddy’s home. Photo by Brandon Soderberg