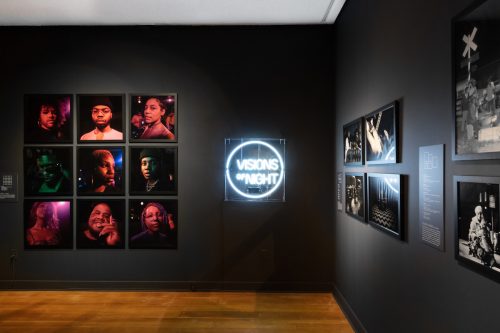 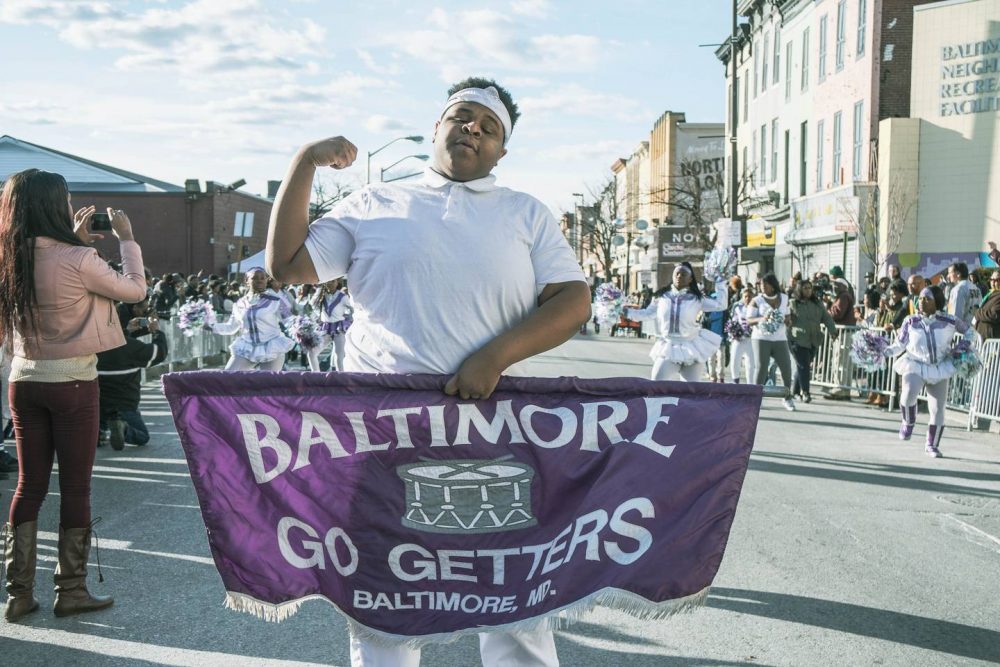 After houses and a Pride flag are burned in Baltimore, the flags return – “We’re not cowering”
by Fern Shen
Published June 16 in Baltimore Brew

At a house across the street, a scorched flagpole was all that remained in the spot where a Pride flag was also torched, apparently during those same hours when the houses were set ablaze.

City Councilwoman Odette Ramos – who lives one block over from where the fire broke out – was on the scene today, talking to neighbors and the workers going in and out of the charred structures in the 300 block of East 31st Street.

“People are really, really upset,” said Ramos, who met last night with community members in an impromptu gathering at the Peabody Heights Brewery.

Excerpt: The melodic chants, the loud drums that sound like thunder, the young toddlers, 70-something-year-old elders and every age in between marching and dancing through Baltimore streets.

The scene always fascinates me.

Each and every time I see the greatness of our marching bands I’m reminded of how much I love them and the summer months when they perform the most. The legacies of these bands date back to the 90s, first becoming popular in West Baltimore and later in other Black communities. I remember as a young girl seeing my homeboys strut in their uniforms and watching my closest girlfriends sweat out their perms as they performed down the streets of neighborhoods. I wanted to be just like them.

Excerpt: The Baltimore Museum of Art has selected Russell Reynolds Associates to aid the museum’s search for its next director.

The museum announced Wednesday that RRA will work with the museum’s 10-member search committee to identify a successor to Christopher Bedford, who stepped down earlier this month. A final decision will be made by the museum’s full Board of Trustees, who will take a vote.

When Bedford, who is white, announced plans in February to become director of the San Francisco Museum of Modern Art, he triggered a conversation about whether the BMA’s next director should be Black to reflect the city’s population and support the museum’s goals of diversity and inclusion.

Based in Washington, D. C., with an office in New York City, RRA was chosen following an interview process led by the museum’s search committee, co-chaired by BMA Board Chair Clair Zamoiski Segal and Trustee Darius Graham.

Excerpt: Victoria Adams-Kennedy labels herself a late bloomer. The Baltimore native hails from an artistic family—her brother is renowned visual artist Derrick Adams and her son is True Laurels founder Lawrence Burney—and in her twenties, she left a journalism career path at Towson University to pursue singing in a local reggae band. The pursuit of writing was left on the back burner.

Now 58, Adams-Kennedy, pictured, has returned to the written word, having recently earned a graduate degree in creative writing and publishing arts from the University of Baltimore, where she “fell in love” with works by Nobel Prize-winning novelist Toni Morrison.

“I also fell in love with the idea of a sisterhood of other Black women who were writers and looking for a sense of community, like those that I learned about in undergrad,” she says, referring to activist groups like the Black Arts Movement. “Their work was reflective of the times they were in. I wanted something like that.”

Excerpt: Baltimore’s giant Whirligig is back.

Nearly five months after Vollis Simpson’s 55-foot-tall sculpture was taken down for restoration, it’s back in place at the American Visionary Art Museum.

The sculpture, entitled “Life, Liberty and the Pursuit of Happiness,” is one of several outdoor works that former director Rebecca Alban Hoffberger wanted to restore before she stepped down in early April, so they would be in good condition for her successor.

“It’s fabulous!” Hoffberger said today about the restored Whirligig. “It’s better than I could have hoped. It’s as fresh as the day Vollis put it up there.”

Excerpt: It was Fathers Day. It was Juneteenth. And it was a grand gathering of Baltimore’s jazz community with performances by some of the biggest local names and brightest up-and-comers.

Throw in the fact that the weather was sunny, breezy and blessedly not humid, and the result was a terrific Baltimore Jazz Fest event yesterday in Waverly.

The all-day outdoor celebration was a project of the Baltimore Jazz Alliance (BJA) in partnership with St. John’s Episcopal Church at 3009 Greenmount Avenue.

D. Watkins’ Latest Book Examines The Toxic Masculine Culture in Which He Was Raised
by Ron Cassie
Published June 22 in Baltimore Magazine

Excerpt: New York Times best-selling author D.Watkins, whose works include The Beastside: Living (and Dying) While Black in America, The Cook Up: A Crack Memoir, and We Speak for Ourselves, teaches at The University of Baltimore and serves as an editor-at-large for Salon. He also recently served as a staff writer on the HBO miniseries, We Own This City.

The ever-busy Watkins’ most recent memoir, Black Boy Smile, published in May by Legacy Lit, plumbs his childhood and coming-of-age experiences in tough East Baltimore. A financially successful and occasionally violent drug dealer before leaving “the game” in his mid-20s to pursue a college education—toward what purpose he wasn’t sure at the time—Watkins unpacks his childhood trauma and struggles to form healthy relationships as a Black man. Black Boy Smile is a personal examination of the toxic masculine culture in which he was raised, but aspects of his story will resonate with far too many men, who’ve long been taught to bury their secrets and pain.

We sat down with Watkins to discuss the book, healing from trauma, and literature’s lasting impact.

Excerpt: A former union hall is now a unity hall, after civic leaders on Friday cut the ribbon for a new center for arts, education and job training at 1505 Eutaw Place.

Baltimore Mayor Brandon Scott joined about 100 area residents and others to open the three-story community center, which was designed to break down barriers that previously divided various neighborhoods in Central West Baltimore.

The event included tours of the building and an exhibit about the area entitled “Division and Unity in Central West Baltimore” by historian Philip J. Merrill of Nanny Jack & Co.

The festivities will continue Saturday when the No Boundaries Coalition holds its 15th annual block party in the Eutaw Place median strip just outside the building. It will feature music; food trucks; kids’ activities assembled by Port Discovery children’s museum and produce from Fresh at the Avenue.

Nneka N’namdi wants you to use this app to fight blight in Baltimore
by Donte Kirby
Published June 21 in Technical.ly Baltimore

Excerpt: Nneka N’namdi recalled a moment in 2016 — well before the recent launch of her housing organization’s app — when she saw kids navigating an ungated demolition site comprising of four brownstones on West Baltimore’s Fremont Avenue.

There were no protective barriers or signage warning about the giant holes on the street where the basements use to be. She imagined all the ways it could go wrong.

What if the kids fell into a hole, or cut themselves playing in the debris and got tetanus? Why was this happening here when, if this were instead taking place downtown, she could guarantee a safe demolition with gates and signs identifying who was responsible for the area? All these thoughts led her to ask other questions: Why are there over 15,600 vacant properties in Baltimore, and why is demolition the go-to solution?

In the end, she ultimately wanted to answer how to stabilize housing outcomes in the city. In trying to answer that, she came up against a familiar hurdle: a lack of numbers.

Excerpt: Megan Johnson didn’t think much of it when she noticed bits of red stuff in the grass outside her Woodberry home. She thought it might be something from her roof.

Then on Friday she noticed more of the same material at the nearby playground where she’d gone to join a friend and her child – bright flakes of paint, some as big as the palm of her hand, on the playground surface.

The friend recalled that she, too, had seen the paint flakes outside her house.
At that point it hit them: the paint must be coming from the work that crews had been doing for the past several weeks on the huge television tower that gives their neighborhood its nickname “TV Hill.”

“My heart stopped for so long I was speechless,” Johnson said. “I wondered, what if this was lead paint?” 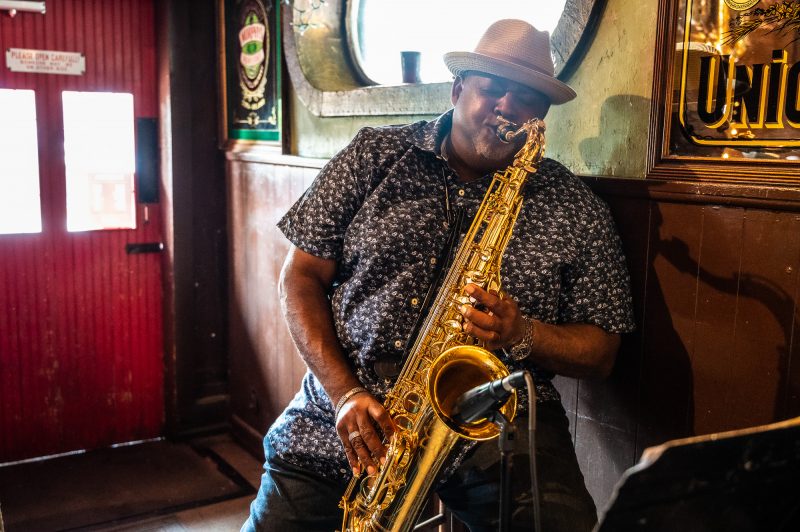 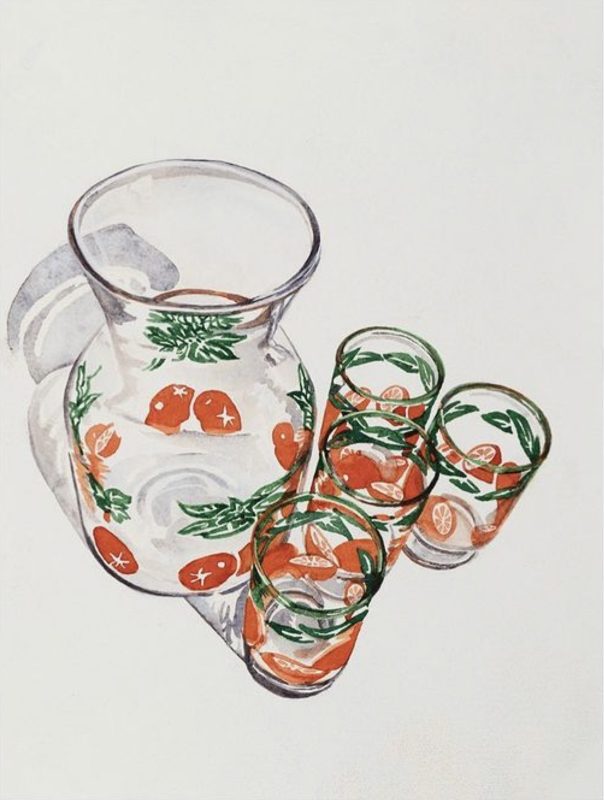