Look Again: ‘The Double: Identity and Difference in Art Since 1900’ at the National Gallery of Art 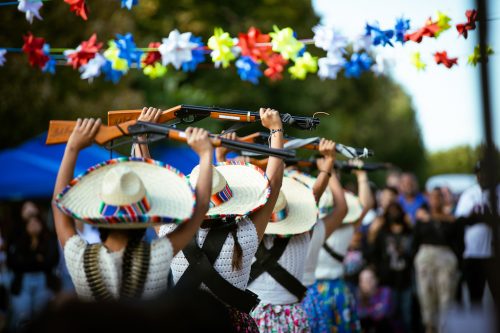 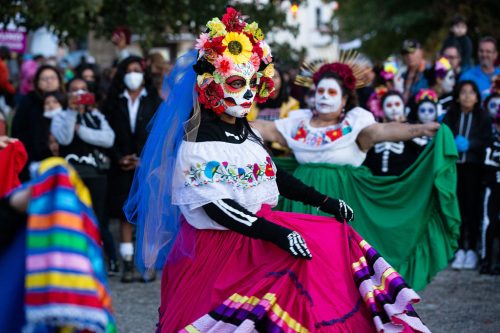 Visual Art
Look Again: ‘The Double: Identity and Difference in Art Since 1900’ at the National Gallery of Art
A major exhibition at the NGA probes doubles and difference 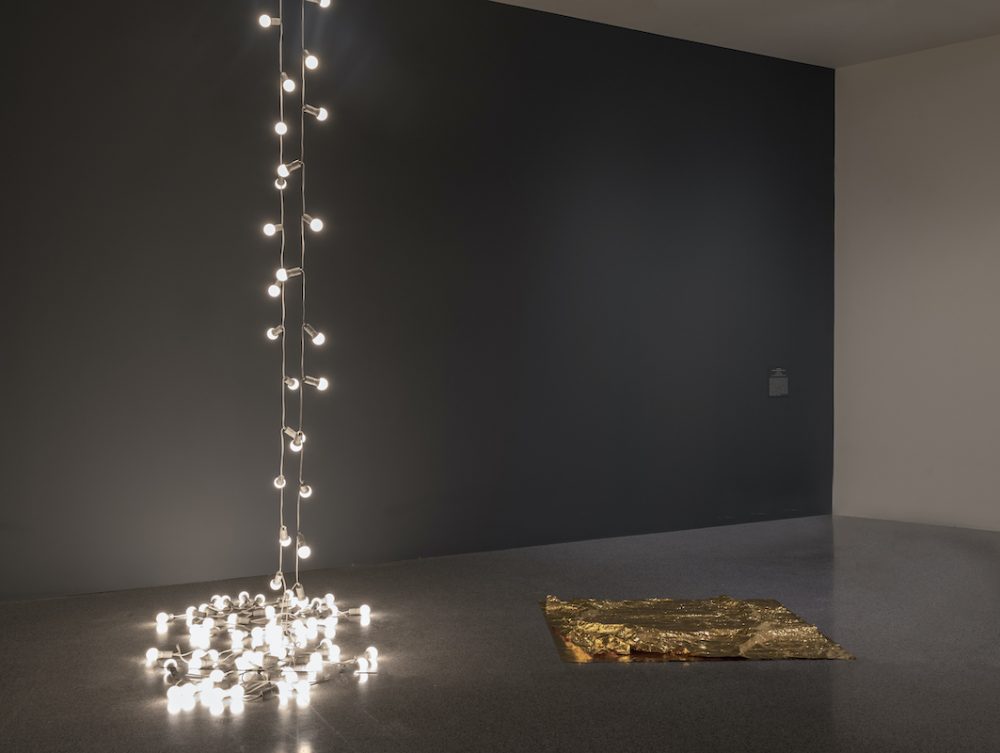 In corresponding locations on each of Robert Rauschenberg’s paintings Factum I and Factum II are two printed photographs of a burning building, a snapshot of two trees, two faded images of Eisenhower, and a print calendar for every month. Each element is a copy of a copy, contained within a composition that is itself a double, but there is no genealogy that can be traced to locate an “original.”

Currently shown together in The Double: Identity and Difference in Art Since 1900 at the National Gallery of Art in Washington, DC, the two paintings were executed simultaneously in 1957. The artist moved back and forth between each painting, attempting to replicate his own gestural brushstrokes down to the drips of paint running down the canvases. But because the two canvases were painted at the same time, it is impossible to determine which drips came first. They are no less artificial than the print reproductions strategically adhered to the canvases. Celebrated by abstract expressionists during the same decade, the artistic ideals of spontaneity and authenticity collapse in the Factums.

Almost. Close looking reveals failures in Rauschenberg’s attempted transcription of each mark to the opposite canvas: one brushstroke is more curved than its twin, or the placement of another seems a bit off. The paintings are marked by similar asymmetries—or dissimilar symmetries. There’s a certain satisfaction in spotting these variations; a reassurance that singularity of expression is real and meaningful (and commodifiable: “one of a kind”).

The show does not merely propose that the double has an enduring presence in art history; it suggests that the double is entrenched in how we see and understand ourselves and the world—or how we might better understand.

The Factums and other pieces in the exhibition—like Sherrie Levine and Sturtevant’s scandalous appropriations of other artists’ work—suggest that the perception of sameness can threaten our faith in authenticity. That ideal may be symptomatic of the persistently challenged belief in our own unified individuality as human beings who build identity out of distinction: I am (you are, he is, we are, it is) this, not that. But the pleasure of locating small differences in the Rauschenbergs and other works in The Double also coincides with a sense of anxiety. There’s another part of us that wants to see the artist succeed in perfect duplication, but we don’t get to. Sameness can promote a confidence in one’s own expectations and knowledge, and that sense of order can be easily disrupted by deviations from the norm.

In other words, similarity and difference come with their own baggage.

Divided into four thematic sections linking a total of more than 120 artworks, the monumental exhibition probes the perceptual implications of encountering duplicates, the effects of reversals and inversions, dilemmas prompted by two opposing choices, and the psychological doubling of identity. With multiple subsections to each chapter, the exhibition opens up the inexhaustible problems of the double, demonstrating how art is particularly well suited to explore them. After all, art is historically rooted in the act of doubling. A photograph and an etching are both reverse duplications of an image from a negative or incised plate, respectively. Sculpture is often produced via casting, a three-dimensional copying process. The very act of representation itself is an attempt to replicate observable qualities of a real thing or person (all the more interesting that this exhibition begins with modern art, which welcomed a turn away from mimetic representation). But the show does not merely propose that the double has an enduring presence in art history; it suggests that the double is entrenched in how we see and understand ourselves and the world—or how we might better understand.

Canonic doubler Jasper Johns features heavily in the exhibition, starting with Two Flags (1962) displayed at the entrance to the show’s galleries. Two Flags feels instructive here: When seen as a singular object, an American flag takes on a monumental power that transcends its material presence, but doubling it undermines its authority. When we are asked to look twice—first at the symbol and then at the image itself—the actual stars and stripes appear less commanding than the “Stars and Stripes.”

Nam June Paik’s Nixon (1965-2002) likewise exploits the double to subvert illusions of power by pairing two TV screens playing the same selection of the former president’s speeches simultaneously. Each screen sits behind a magnetic coil which encircles Nixon’s head and is alternately charged with a magnetic current. We experience the authority of Nixon’s familiar and therefore believable presence at the same time that, on the opposite screen, our perception of that authority is disrupted by the distortions triggered by the magnetic current. Soon after our confidence in one image is restored, the charge switches back and reasserts the dominance of the medium over the message.

While Paik uses visual contrast to intervene in power, other works in the exhibition address the production and exploitation of difference to maintain a hierarchy. Renée Green’s assemblage Color I (1990) pairs two excerpts from Jim Crow-era novels—The Great Gatsby by F. Scott Fitzgerald and Iola Leroy, or Shadows Uplifted by Frances E. W. Harper (one of the earliest African-American female novelists to be published). In each, a white male character claims that contact with Black people will “drag down” or “utterly submerge” the white race. Between the enlarged, framed texts are a set of 30 commercial paint chips, many labeled with arbitrarily racialized names: Mexican Orange, Orient Blush, Jamaican Dream. Bookended by two literary examples of overtly white supremacist anxieties, these labels serve as a reminder that difference is continually reinscribed into even the most mundane commodities in ways that reflect nothing of reality but racism’s persistent grip.

Always but especially relevant now, in light of the overturning of Roe v. Wade and the women’s revolution in Iran, Mary Kelly’s digital film projection WLM Remix (2005) slowly merges two moments in time: a photograph of a 1970 women’s liberation march and an image of its reenactment, organized by the artist with her students more than three decades later. While history is performatively reenacted in Kelly’s film to signal feminism’s ongoing urgency, the distance of the past and the need to recover it again and again is keenly felt elsewhere in the exhibition. Working from a single photograph taken when he was a child, Arshile Gorky began painting two portraits of himself and his mother around 1926. The artist’s mother, a victim of the Armenian genocide, died from starvation in his arms years prior, and appears more ghostly in the portrait the artist continued to work on as late as 1942 (he stopped painting the other around 1936). In 2016, Zoe Leonard reproduced her late mother’s likeness from an old photograph as well, only she instantaneously photographed rather than slowly painted the original snapshot twice.

Possibly no artist has mined love and grief more poignantly than Felix Gonzalez-Torres, best known for his heartbreaking installations prompted by the loss of his partner, Ross Laycock, to AIDS, which also killed Gonzalez-Torres years later. Curator James Meyer ingeniously paired one of these installations, “Untitled” (Lovers – Paris) (1993), with another made by Roni Horn, titled Gold Mats, Paired—For Ross and Felix (1994/1995). Horn had originally created the work as a single gold sheet which she then reproduced after Laycock’s death as a gesture for his grieving partner, who had admired the work’s original iteration. The light emanating from Gonzalez-Torres’ installation, which consists of two strings of illuminated bulbs hung from the ceiling, is reflected in Horn’s two crinkled sheets, one laid on top of the other on the floor. In each work, material components that are alike in constitution also radiate vitalities that are both individual and synced. Together, the two installations serve as a double-layered meditation on queer twoness.

The works by Gonzalez-Torres and Horn, the two Gorky portraits, and the Rauschenberg paintings all belong to different museum collections, so their reunion alone makes The Double feel like an important and rare moment in museum curation. The potential consequences of the show are far more significant and infinitely complex, implicating our desires and fears as people navigating a world that we tend to define in terms of likeness and difference. But sharp curation makes these issues approachable for the open and patient viewer. The proposition is simple: Look, then look again.

The Double: Identity and Difference in Art since 1900 is on view at the National Gallery of Art through October 31.

Photos courtesy of the National Gallery of Art