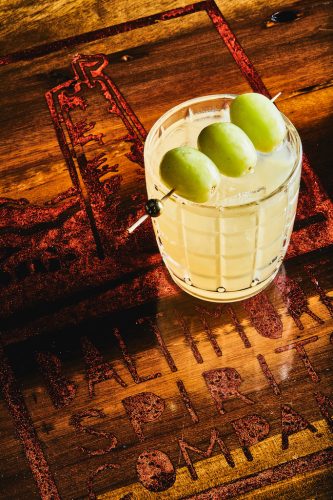 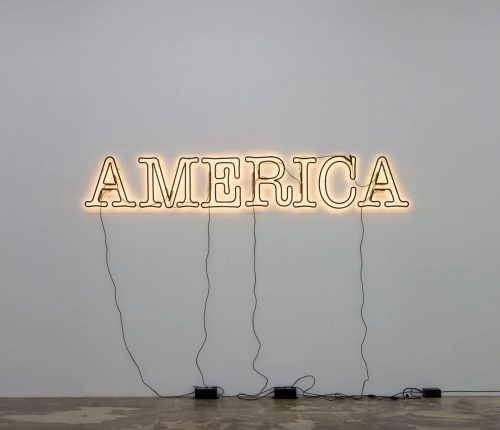 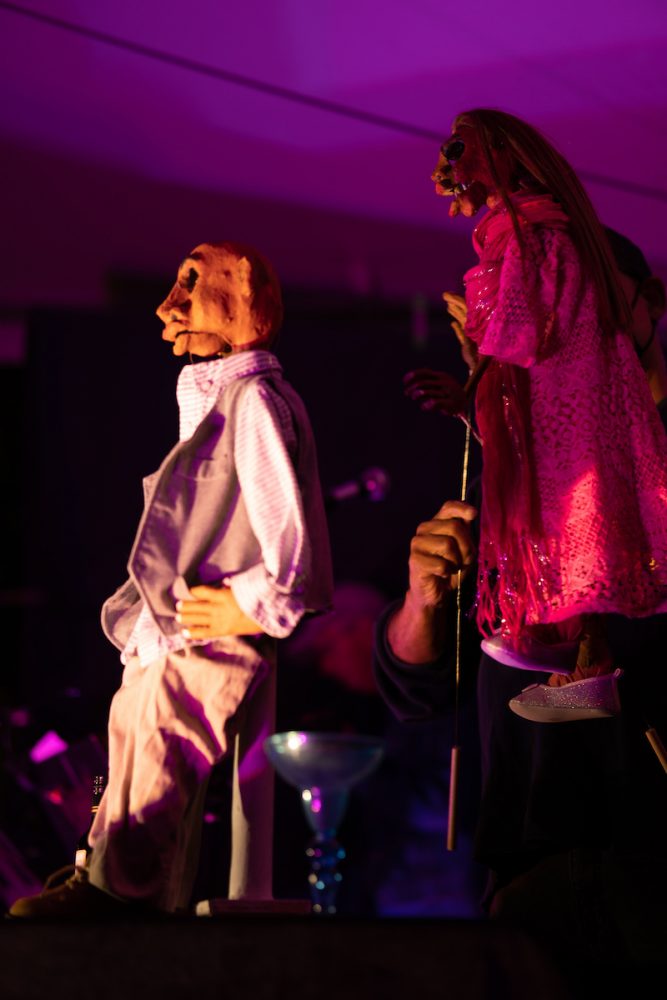 After attending a Puppet Slamwich at Black Cherry Puppet Theater, you might walk away with two realizations: Anything can be a puppet and anyone can be a puppeteer, including yourself. It happened to me—earlier this year I challenged myself to make my first puppet show. It included two marionettes, talking carnations with googly eyes, and changing backdrops. The marionettes were tricky to operate, but the audience enjoyed them nonetheless.

Though the Puppet Slamwiches’ quarterly variety shows feature all styles of puppetry—with shadow puppets, dummies, rod and arm puppets, finger puppets, and marionettes—any object can work if given the right kind of movement. Michael Lamason, the theater’s co-founder, showcased this at a previous Slamwich with a dancing banana peel.

A Puppet Slamwich is geared for an adult audience, yet it taps into a childlike imaginary realm where inanimate objects are stirred to life through playful action. Typically hosted at the intimate Black Cherry Puppet Theater in Sowebo, this fall’s Puppet Slamwich took place in the Current Space courtyard on Saturday, September 24th. The puppet theater had been hosting indoor events with limited capacity, but partnering with Current Space enabled them to host this past Puppet Slamwich outdoors for two sold-out crowds.

Emily Schubert, the charismatic host, came out in character as Suzie Sal the Science Gal, a science enthusiast with the same eccentric personalities of Bill Nye the Science Guy and Ms. Frizzle. Dressed in a long white lab coat, her neon hair clips and colorful socks added extra flair. Professing her passion for a variety of “ologies” that would make podcaster Alie Ward proud, Suzie Sal emphasized her recent experiments with “puppetology” and presented the Puppet-o-meter, an instrument that would measure the levels of collective joy created by the audience throughout the puppet show.

The first performer was Emily Kobert with a rendition of the oral folk tale “Her Golden Arm.” Kobert told the story with a 40-foot-long crankie scroll, using black and gold ink, and a gouache-resist technique on freezer paper. At the beginning, the illustrations featured high-contrast silhouettes of figures, perhaps to convey the grief that consumed the main character, a secluded widow. But as the story progressed, the illustrations became more detailed and expressive, depicting the widow’s golden years with her childhood friend, who happened to have a golden arm. Then there was a surprise ghost-story ending, where a broken promise paved the way for strange solace.

The next two pieces were wordless, relying on music, mood, and movement to tell their stories. Chuck Nesci unveiled a landscape diorama featuring rocky perches, an aging tree draped in moss, and plastic waves framed by wooden slopes. The waves began to move, consistently churning through the performance. Nesci summoned a mechanical rod puppet that looked like a robotic sabertooth tiger. He manipulated it with aluminum handles, allowing it to traverse through the landscape, where it picked up a fish from the waves and then lifted off in flight.

Visiting from Charlottesville, Miranda ER demonstrated the life cycle of a dandelion in their performance “I Made Solemn Vow to Break the Sidewalk.” A dandelion puff floated on a wire rod as breathy whispers played overhead. Nonsensical scat syllables took over as paper leaves emerged behind the styrofoam sidewalk set. The vocalizations grew even more chaotic, the dandelion bloomed, and the sidewalk finally cracked.  No matter what shape it took, the determined dandelion exuded humor and charm. The show ended as it began, with a lone dandelion puff drifting off the stage.

The second half of the show paired puppetry with songs. Veteran Puppet Slamwich performer Schroeder Cherry brought Murray Grand’s jazz narrative “Guess Who I Saw Today” to life with rod puppets. In a hot pink gown, a female puppet confronted her silent and still male counterpart. Cherry guided the scorned lover with attentiveness, matching the phrasing of the song to the puppet’s quick turns and gestures.

Then, to a chill hip-hop beat, Mabel Windsor-Buchanan sang aloud the existential musings of a Grocery Store Check-out Machine. The character was crafted out of painted cardboard, with a large box as the body and a flat backing for the face, animated with googly eyes and a rectangular flap for a mouthpiece. With the same kind of spirit as the Brave Little Toaster, the Check-out Machine yearned for adventure, singing about a “whole world where groceries go and never return.”

The final performance was a tender shadow puppet show titled  “La Lu” by LA-based artist and MICA grad Marie Claire Macadar. Through song and spoken word, Macadar used an overhead projector to cast hand-cut shadow puppets. The story began with the narrator recalling their early memories of being fascinated by the moon. But during a 3rd-grade science lesson, the narrator felt a sense of betrayal from their mystical friend La Lu, learning that the moon was really a rock in orbit around the earth. With the help of their mother, the narrator reconciled their emotions and was able to still feel the magic of the moon.

At the end of each Puppet Slamwich, Schubert extended an offer to the audience. Anyone who felt inspired to try their hand at puppetry was encouraged to reach out about participating in a future Puppet Slamwich. This is a major reason why Black Cherry Puppet Theater is an important alcove in Baltimore’s creative community. Holding down the puppet fort for decades, they continue to offer opportunities for everyone to explore this art form.