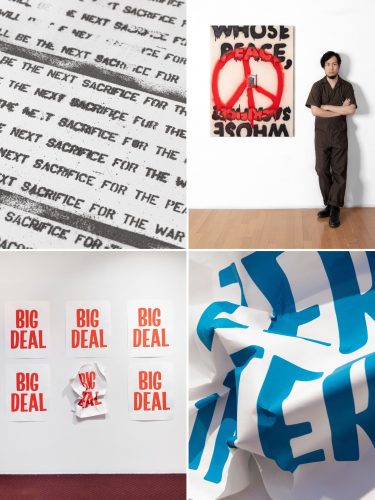 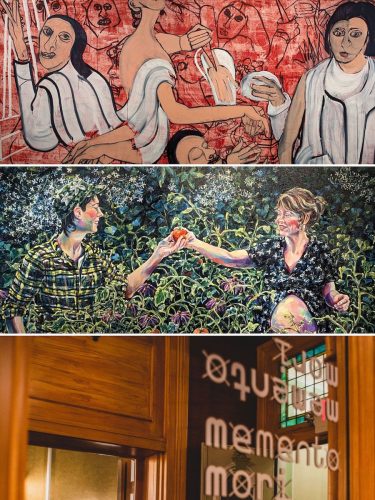 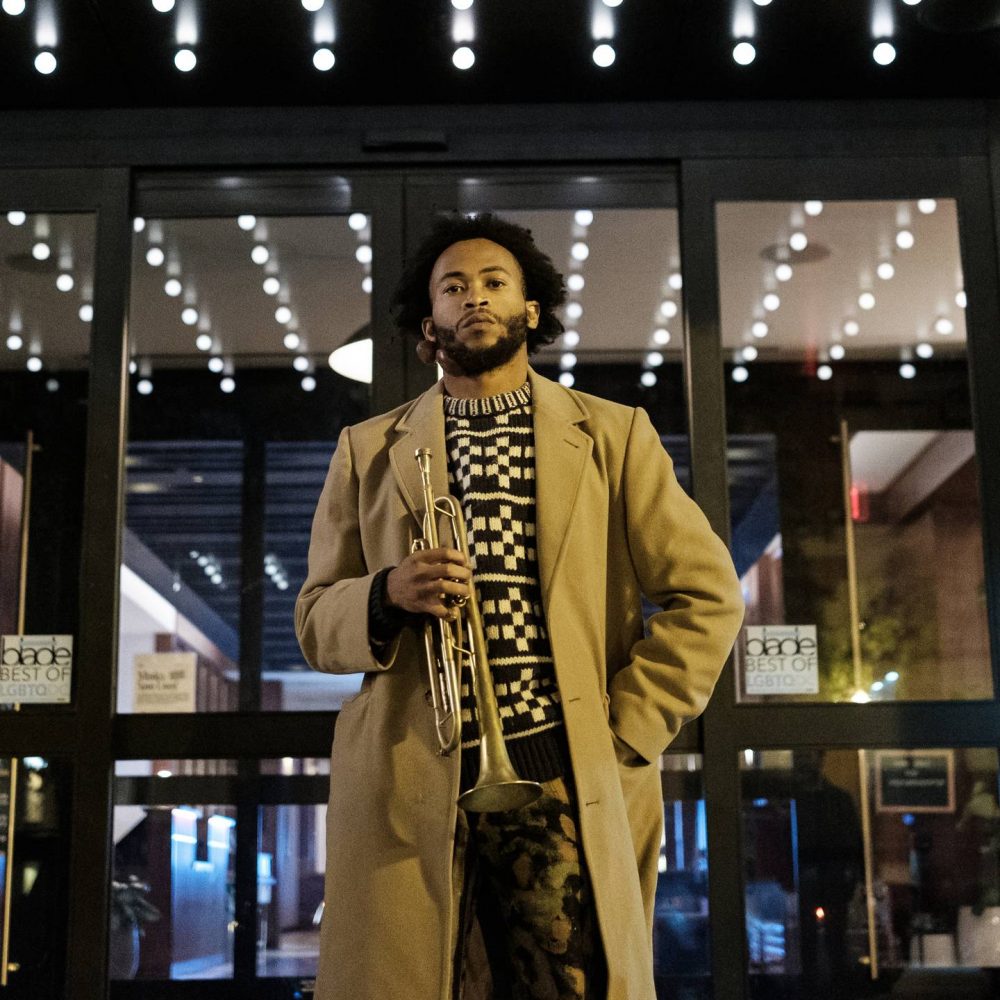 Header Image: Trumpeter Brandon Woody stands for a portrait before a performance at the Eaton hotel in Washington, D.C., on Nov. 23, 2022. (Michael A. McCoy for The Baltimore Banner)

Excerpt: During an extreme, first-of-the-year cold front in mid-November, Brandon Woody is soaking up every ounce of heat in his Southwest Baltimore living room. He’s in a white T-shirt, sweats and black Crocs lounging with his homie, musician Briley Harris, and Woody’s dog, Marley, but confesses that he should be spending this idle time working at his craft.

You may or may not have seen Woody around town on festival stages, on a Calvin Klein billboard shot by SHAN Wallace or entertaining a wine glass-gripping crowd at the Eubie Blake’s courtyard. That’s because over the past couple of years, the 24-year-old trumpeter has made some significant strides in his career.

In February, he was booked to provide the music for a Nike sneaker release in New York City’s SoHo district. In September he and his band, UPENDO, had a weeklong residency at the University of Maryland, College Park’s performing arts center, The Clarice, for their Visiting Artist Series. And, maybe most glossy of all, he was cast as a musician in the upcoming Apple TV Baltimore-based series, ”Lady in the Lake.”

Excerpt: The ‘90s saw their share of feel-good, family-loved, Black sitcoms (see: The Fresh Prince of Bel Air, A Different World, and Living Single). Quippy, wholesome, and relatable, they were what led Imani Robinson—who acted in The Wire as a kid and most recently played Nicole Suiter in We Own This City—to create her own TV pilot, filmed in Baltimore.

Debuting with a wrap party at Mt. Vernon’s Hotel Revival on Dec. 3, 3 Blind Mice features Robinson as main character Naeemah, a Black woman adopted by white parents. Brought up in white environments, and curious about her past, Naeemah moves to Baltimore in hopes to start anew at a historically Black college. She sticks out like a sore thumb at first, but thankfully finds friends to help her navigate the journey. Joining Robinson on screen are fellow Wire alums Tristan “Mack” Wilds (Michael Lee) and Jermaine Crawford (Duquan “Dukie” Weems). Although tickets to the wrap party have sold out, those still hoping to attend are asked to leave a message here.

Excerpt: On March 4, 1977, Capt. Thompson Wallace maneuvered his skipjack, the Claud W. Somers, out of a Deal Island harbor on Maryland’s lower Eastern Shore. Aboard were his seasoned crew of six, all but one of whom were members of his family. The Chesapeake Bay had finally thawed after weeks of a solid freeze, and the captain, like many of the island’s watermen, was hoping for a good workday.

A March gale sank the Claud W. Somers — and ended a tradition of Black skipjack captain-owners on the Chesapeake Bay. Thompson was one of the last two Black captains to dredge for oysters under the shallow-draft, two-bateau wooden sailboats built for Chesapeake oyster dredging. Many of the remaining skipjacks are now berthed at Chesapeake maritime museums. The restored Claud W. Somers is on display outside the Reedville Fishermen’s Museum on Virginia’s Northern Neck, where tourists peer into her sleeper cabins during organized sails.

Excerpt: Mayor Brandon Scott has vetoed a bill that would have reduced City Council members’ eligibility for pensions to eight years of service from 12 years, after Baltimore’s ethics board warned the legislation could undermine public confidence in city government.

In a letter delivered to the bill’s sponsor, Council President Nick Mosby, Scott wrote that maintaining public trust is paramount to his ability to perform the duties of his office.

“When I took my oath of office as a Baltimore City elected official, I swore to execute my duties without partiality or prejudice,” he wrote. “Given the potential for ethical issues with the bill … I cannot in good conscience sign City Council Bill 22-0292 into law without the benefit of a complete and thorough analysis.”

Part of an installation at the Baltimore Museum of Art’s new collection — “A Movement in Every Direction: Legacies of the Great Migration” — the shelves resembled the ones at my mother’s home in fall and winter, or canning season in many Black households of that era.

It was an annual ritual for my mother. When I would see the jars, lids and rings in the kitchen sink to be washed, I knew the canning process was underway. Soon, I’d smell the mixtures of freshly sliced fruit and sugar cooking in our kitchen. My mother mainly canned preserves, and pear preserves were her specialty and my favorite.

Her sisters, who also lived in Baltimore, and my grandfather in North Carolina, followed the same custom. While canning was once done for financial reasons, to have food in the winter, it remained part of Black Southern culture even when it was no longer related to financial considerations.

Can’t find clothes to fit? Make your own.
by Imani Spence
Published November 27 in The Baltimore Banner

Excerpt: Mikayla Turner shows the students in her garment sewing class the underside of her dress where she has sewn pink stitches to hem the raw edges.

“I’m always happy to whip my butt out to show some serger stitches,” Turner, 30, said, sparking laughter throughout the room.

Turner is one of the instructors at Domesticity, a fabric shop and studio in Lauraville where she and others show people how to set up sewing machines and walk students through making garments like hand-quilted vests, shirts and trousers. They will also teach people how to make a pattern from clothing they own. They work from the upstairs studio where natural light shines on the cutting tables and large industrial machines.

These are not seamstresses or fashion designers, but everyday folks who sew for themselves or their loved ones without the goal of making money from their wares.

Excerpt: Now that the Harford Road Bridge project has been completed, motorists and pedestrians are relieved to know that a failing 1911 structure has been replaced with a broader, stronger bridge and they can traverse the valley safely.

But the new bridge has its share of oddities. For instance, there’s a southbound bus-only lane that’s unmatched by any northbound equivalent.

Then there are the piles of boulders laid underneath the bridge. Running along Herring Run, they have turned parts of a once bucolic stream into an outtake from a Mad Max movie.

In October 2017, The Baltimore Sun wrote a scathing op-ed highlighting how the state of Maryland fails people with mental illnesses. A month before the article was published, Judge Gale Rasin had found that the acting state health secretary and four other top officials had “willfully disregarded orders to increase the number of psychiatric hospital beds available for criminal defendants, some of whom had been languishing in jail for weeks waiting for treatment.”

The Sun reported that Maryland criminalizes mental illness instead of treating it as a necessary part of healthcare; the number of treatment beds available is consistently far fewer than the number of people in need of treatment. This pattern of criminalization has continued in the years since the Sun published its op-ed and is visible in Courtwatch data. From January to October 2022, our volunteers observed 117 hearings in which defense attorneys proffered that their clients had mental health conditions. In 58.1 percent of these hearings, judges ordered the defendant held without bond.

Excerpt: The barriers blocking vehicle access to the Roland Water Tower in the historically Black neighborhood of Hoes Heights have been removed.

Baltimore Mayor Brandon Scott said in an exclusive Nov. 29 meeting with the AFRO that he has instructed the Department of Public Works (DPW) to remove the barriers, which were blocking traffic around the monument.

“A road that has not been bothering residents for over 100 years should not be changed,” said Scott.

Marilyn and Nick Mosby each report $0.00 in their campaign bank accounts
by Mark Reutter
Published November 29 in Baltimore Brew

Excerpt: Two of Baltimore’s most prominent and controversial officials report that their campaign committees have gone bust.

Indicted State’s Attorney Marilyn J. Mosby and her husband, City Council President Nick Mosby, each filed reports last week to the State Board of Elections saying their campaign bank accounts had $0.00 in funds, even though, elsewhere in the same reports, cash surpluses are listed by a computer-generated program.

Coming off her loss to Ivan Bates in the Democratic primary, Marilyn Mosby’s “Friends” committee reported $12,874.79 in cash in its bank account on August 23.

Two months later, on October 23, the committee said it had no money at the Harbor Bank of Maryland account.

Header Image: Trumpeter Brandon Woody at the Eaton hotel in Washington, D.C., on Nov. 23, 2022. (Michael A. McCoy for The Baltimore Banner)