Speaking of Art at the Stamp Gallery on NOVEMBER [...] 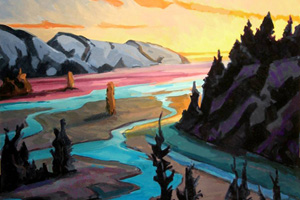 Emily Gaines Demsky is a painter who works primarily in oils on paper and on wood panel. Emily has a particular interest in deconstructing the landscape, in breaking down a vista to its most basic elements of form, line, and color, and playing with the relationships among them. Emily is active in several local organizations, and has served on the board of directors of Art with a Heart since 2003. She has studied painting locally with Tammra Sigler and Deena Margolis, and has participated in a variety of creative collaborations with artists around the country. Emily is a graduate of Barnard College, Columbia University, and The Friends School of Baltimore, and lives in Baltimore, Maryland with her husband and their two young children. shiningegg.com/

A former abstract painter, Philip Koch was inspired in his early 20’s to turn to realism after viewing the work of the famous American artist Edward Hopper. In it Koch grasped the power of a well-painted realist image to entice and involve the eyes of all kinds of viewers. Since 1983 Koch has enjoyed twelve residencies in Hopper’s former studio on Cape Cod. Labeled a “contemporary master” by Fine Art Connoisseur magazine, Koch has had his work spotlighted in 14 solo exhibitions in American art museums including the Butler Institute of American Art (OH), the Saginaw Art Museum (MI), and the Swope Art Museum (IN). Koch’s paintings are in the Permanent Collections of twelve American art museums. Koch is a Professor at the Maryland Institute College of Art in Baltimore. web.mac.com/philipkoch/Site/Home.html