SHOW YOUR LOVE for TAC 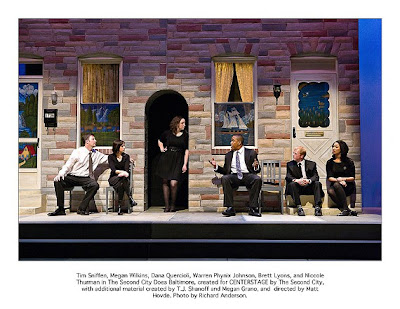 A nice married couple sit down in a realtor’s office. “We just moved to Baltimore from Oklahoma,” they say enthusiastically, “and we’re looking for a new home.”

The realtor provides a binder full of properties and they work through many of Baltimore’s unique neighborhoods. “What about Hampden?” they inquire. “It looks nice.”

“Oh really?” the realtor asks. “Are you a hipster? A pregnant sixteen-year-old? A heroin addict?” The couple shakes their heads. “No? Then Hampden is not for you, folks.”

The scene is pulled from Second City Does Baltimore, a rapid-fire roast of Charm City created by The Second City, the famed Chicago comedy factory that discovered Stephen Colbert, John Belushi, and Tina Fey, among others, and showing this month at Center Stage. Skewering Baltimore, neighborhood by neighborhood, the actors pose one inside joke after another and the audience loves it. Guffaws, chuckles, and crackups abound as Baltimoreans of all backgrounds and ages laugh at themselves and each other.

A selection of both scripted and improvised skits, as well as several musical numbers, the copious amount of Baltimore lore crammed into the performance attests to the acute observation skills of Second City’s writers, as well as a sharp nose for irony.

If all else fails, try to channel the confidence of Oprah.