What is your Tar Baby? Reception and Artist Talk [...] 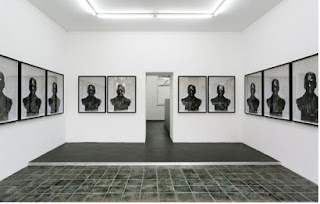 Lorraine O’Grady, The First and the Last of the Modernists (Charles and Michael), 2010, Pigment prints

The Contemporary Museum exhibition “Agitated Histories” brings together an international and intergenerational collection of artists whose works create a dialogue with history, on view beginning Friday, February 11, 2011. Using a range of media including site-specific installation, video, photography, drawing, and theater, and working both individually and collaboratively, these artists reconsider, reframe, and reenact specific historic events to put them in new contexts. The exhibition also includes a commissioned piece whose long-term impact stands to alter the future skyline of the Station North Arts and Entertainment District. “Agitated Histories” will be on view through Sunday, May 1, 2011.

Rodney McMillian: McMillian questions preconceived notions of historical importance and how the viewer immediately creates a false history based on presumptions. Included in “Agitated Histories” is a series of identical photographs of a painted-black bust from McMillian’s Unknown (2006) project. The bust itself suggests that the unnamed figure was possibly of significance, but is contrasted by heavy damage and chips in the glossy black veneer revealing the white plaster beneath, marring the piece.

Geof Oppenheimer: The language, conventions, and history of political rhetoric are dissected and deconstructed through Oppenheimer’s reframing of significant political events. For “Agitated Histories,” Oppenheimer’s video installation Washington Color Field School (2006-7) depicts restaged famous senate hearings, which CSPAN sent him, that exaggerate the gestures and theatrical aspects of Washington D.C. politics. His On Black Flags (2010) project, a series of black and white photographs, features unexpected excerpts from political speeches by such luminaries as Fidel Castro and Margaret Thatcher. By mounting the texts on black cards, he removes the phrases from their original context, enabling viewers to grasp them in a different way.

Mark Tribe: Prominent speeches of the civil rights movement are the source of inspiration for Tribe, who works with actors to stage public reenactments of influential protests and rallies, thus examining the legacy of political discourse in the 1960s and 1970s. Tribe’s The Port Huron Project (2006-9) features a series of reenactments of protest speeches given by Angela Davis, Cesar Chavez, and Stokely Carmichael during the New Left movements of the Vietnam era.

Lorraine O’Grady: O’Grady’s photographic series The First and the Last of the Modernists, Diptych 2, Green (Charles and Michael) (2010) juxtaposes images of French poet Charles Baudelaire and the late King of Pop Michael Jackson. O’Grady maintains that Baudelaire and Jackson, artists separated by nearly 150 years, occupied pivotal positions in their genres and shared similar character traits. By pairing images of Jackson with the few available images of Baudelaire, she contrasts the men at roughly the same ages as she tracks their oppositional trajectories: Baudelaire’s descent from an aristocratic family into poverty, and Jackson’s meteoric rise to wealth and fame.

Ulrike Müller: Responding to the legacy of the feminist movement, Ulrike Müller mines the history of feminism by exploring the slogans, images, and tactics of the generation of women artists that came before her. For Herstory Inventory (2009-ongoing), the artist studied the Lesbian Herstory Archives’ expansive collection of posters, T-shirts, and other ephemera of the feminist movement. She then asked dozens of friends to make interpretive drawings based on these once powerful declarations, exploring the longevity of the feminist message over time, while paying tribute to the activist feminist history and its conflicting positions and productive debates.

Michael Cataldi: With his new work 1,623 cubic feet, room 405, 110 W. North Avenue (2010-ongoing), Cataldi calls his attention to Baltimore and the history of North Avenue, while exploring the development of the city’s burgeoning Station North Arts & Entertainment District. Cataldi is working with lawyers to purchase or lease the legal rights to the volume of air hovering directly above the North Avenue Motel. The “purchase” of room #412, which doesn’t currently exist, reflects his view that the success of Station North will one day necessitate the replacement of this hotel with one that is three stories taller. His goal is to “agitate” the future history and development on North Avenue by being a part of any future building plans. In the Contemporary, Cataldi will illustrate the physical volume of the motel room he hopes to buy using light, black paint, and carpet.

“Agitated Histories” will be on view though May 1, 2011, and will conclude the Contemporary Museum’s Project 20 series.

For more information about the Contemporary Museum and Project 20, visit www.contemporary.org.

What doesn’t fit in their apartment waits in storage as they rotate pieces in and out, rendering their home as both a gallery and a domestic space, enriched by their love for art and artists.

So much happened in the past two weeks, but I tried to ease my way back into the internet.

While Reid’s part of Immortal Voices hints at the heavens, Pangelica’s deals with darkness.