MAP’s Out of Order Friday, April 1 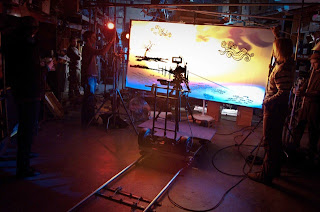 It took Artist Kathy Fahey a full week of long days and sleep-deprived nights to install her art show, Paper Fish, which gives an insider’s view into the fascinating process, and hard work, of creating a music video from scratch. The show, at Metro Gallery through April 23, displays Fahey’s shadow puppets and paper cuts used in a unique new video for Baltimore band, Wye Oak.

Paper Fish opened on March 25th with the installation of Fahey’s work as well as a display of O’Leary’s ingenious lighting skills, the premier screening of the video, and photos of the video-making by Neal Golden. A Closing event will occur Friday, April 22, at the Metro Gallery. This event will include a live performance of the shadow puppet show from the video accompanied by very special musical guests.

Musicians Anna Roberts-Gevalt and Elizabeth Laprelle, from the heartland of Virginia, will also perform with their amazing scrolling shadow puppets known as Crankies.

It’s hard to reconcile my rich memories of the place with what now reads as a limited and parochial landscape.