“Editions of You” Exhibition Review by Hannah Matthews

Next Story
“Editions of You” Exhibition Review by Hannah Matthews 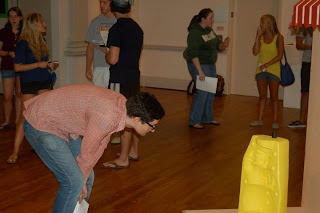 Anthony Cervino “Editions of You,” a solo exhibit at McDaniel College

Anthony Cervino’s sculpture show, “Editions of You,” is currently open in the Rice Gallery at McDaniel College from August 30 through September 23. According to Cervino, the ideas that are woven throughout this loose narrative of an exhibit are those of growing old and boyhood versus adulthood. The general feeling this specific collection of works gives off is one of cohesiveness and flow from piece-to-piece. This helps the viewer to really get into the mind of Cervino and his ideas are not muddy, but rather clearly grasped.

All’s Well that Starts Well (and Moves with the Sun) was the largest work in the show as well as the glue that held it all together. Most of the other pieces related to this one. On a platform Cervino placed half of a two-foot tall yellow snowman mold. The snowman stood under a red and white awning that was attached to a wall made of the same finished wood that the base was made of. The backside of the work featured a puddle pooling from the base of the wall, seemingly from the yellow snowman, and a few feet away a band saw that Cervino had altered with Bondo. This giant sculpture attempts to say so many things that it boggles the mind, but that is what makes it so seducing. Cervino gave us the hint at the artist talk that he uses the snowman as a stand in for himself. The snowman is outside, or out front, with the awning, with the façade. The inside is darker, no light colors or comforting awnings, and Cervino’s snowman is melting on the inside of that world. Whether the dark workings of an inner world or the realities of the adult world, the process seems to be as unstoppable as melting snow. At the moment, the snowman inhabits both worlds.

Home at Last, like most of its fellow exhibition pieces, holds a relatable story that allows the viewer to make it their own. It is a minimal piece consisting of a cleat and a coil of rope, the kind of rope used to secure a boat to aforementioned cleat. This cleat would usually be anchored to a dock, but in this piece the cleat looks unsteady and unready to hold anything at anchor. This speaks of settling down, but even that never being concretely solid or secure.

One addition to the show that stands out like a sore thumb is Advanced Projects, a slide projector carousel. Cervino said he wasn’t sure that he understood it yet and declined to really talk about it, saying, “it hasn’t lived long enough yet.” Amongst such an unmistakable narrative this question mark of a sculpture did not fit. It just didn’t flow with the rest of the exhibit. But perhaps this idiosyncratic show is just cool enough to need that anomaly to keep it from reaching perfection. After all, Cervino did say that his pieces are evolving works that are kept in motion. Advanced Projects is that next step to the future.

“Editions of You” is both fresh as well relatable. It is not filled with color beyond the most basic palette because Cervino is not comfortable using color yet. He understands the emotional weight of color and does not feel responsible enough to use them yet. In spite of that these sculptures stand on their own and within this collection as an exciting opening to this year’s gallery exhibitions at McDaniel.

Photos from the Opening Reception by Steven Pearson
Share