Is an MFA in Visual Arts worth the price tag? 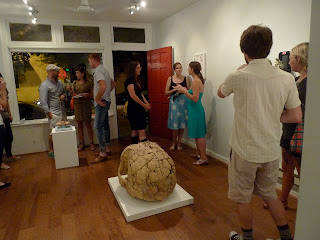 Narrative Liminal features the work of John Bohl and Mike Peter Smith. Both Artists’ concepts refer to the in-between states and conditions that allude to disarray. Their work is critical of the discontinuity of traditional narrative while contributing to the dissolution of order. At the same time, the work is informative of the continuity of tradition.

Journalism is being challenged by increasing Balkanization, resulting in a gap in perspectives that is also redefining the way in which sources are established and fact is formed. Currently, substrates of traditional ethics in Journalistic Narrative are the topics for critique in this niche media landscape. As individual personas are established to maintain a ringside media perspective, a dialogue heavily reflected by bias is created. This is reflected in everything from small scale blogs to corporate conglomerates. The gaping margins of perspectives create an ambivalent moral market for inhabitants of the American home.

John Bohl was born in 1983 in New York. He graduated with a BFA in painting from the Maryland Institute College of Art and currently lives and works in Baltimore. John uses painting and sculpture as a platform to examine utopia, kitsch, and romanticism. Recent exhibitions include Baltimore Liste (Contemporary Museum) and Full Color (Current Gallery).

Mike Peter Smith is currently represented by Jeff Bailey Gallery in New York City. His solo exhibitions include Ambrosino Gallery, Miami and Bodybuilder and Sportsman Gallery, Chicago. His sculptures have been included in group exhibitions at Art In General, The Bronx Museum of Art, Exit Art, Lehmann Maupin Gallery, and the Queens Museum of Art. He received his MFA from The School of the Art Institute of Chicago and his BFA from The University of Utah. He lives and works in New York.

The internet was very nice this week.

Who are these people? What is their relationship? Why is it so damn awkward? It's an engaging hook for the audience that fits nicely with the farcical Clue-inspired supernatural whodunnit that follows in the second half of the one-act play.