Reflections on Combat: The Work of the Combat Paper Project at Friends School January 12

Reflections on Combat: The Work of the Combat Paper Project at Friends School January 12 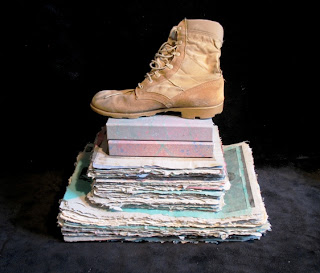 Friends School of Baltimore will present the exhibit “Reflections on Combat: The Work of the Combat Paper Project,” in the Forbush Building’s ground floor gallery (located outside the Learning Center), from January 9 to February 17, 2012.

Featuring artworks produced by veterans of the wars in Iraq and Afghanistan, the Combat Paper Project engages veterans in cathartic paper-making, writing and printmaking workshops to help them reconcile and share their combat experiences through the creative process. The paper used in the artwork is created from the soldiers’ own combat uniforms, which are torn and mashed into a pulp that is then formed into canvas-like sheets.

“Reflections On Combat” has appeared in such venues as the Library of Congress, Washington, D.C., the Bavarian State Library, Munich, Germany; and the Fleet Library, Rhode Island School of Design, Providence, RI. The project’s Friends School show is made possible by The Jay Katz ’45 Art Fund.

The School will host an opening for the public on Thursday, January 12, from 5 to 7 pm. Individuals, schools and outside groups who wish to view the exhibit during its five-week installation may do so by appointment. Contact Jaime Moore at jmoore@friendsbalt.org