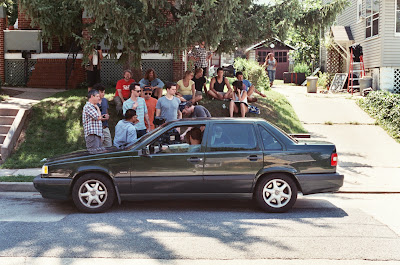 Almost Famous: A conversation with Baltimore filmmaker Matthew Porterfield, one of this year’s exhibitors at the Whitney Biennial by Cara Ober

In the past year, Baltimore-based filmmaker Matthew Porterfield has achieved not one, but several, huge successes in his career. Not only did he win the $25,000 Sondheim Prize in July, 2011, but he was also recently named as an exhibiter in the 2012 Whitney Biennial, a world-renowned selection of cutting-edge contemporary art. Porterfield was also awarded a sizable Creative Capital Grant for his latest film project. With all this under his belt, it seems that the sky is the limit for the filmmaker, who creates arresting, lyrical feature-length films about Baltimore-centric characters.

Recently, I sat down with Porterfield to discuss his new opportunities and projects, as well as the impending Whitney Biennial, which opens March 1. His film, Putty Hill, will be screened at the exhibition from May 2 through May 6, with a conversation with the artist and co-curator of the Biennial’s film and video program, Thomas Beard, scheduled for Sunday, May 6 at 4 p.m.

URB: Hi, Matt. Thanks for taking the time to talk. You’ve been really busy lately, from what I’ve heard.

MP: That’s true. I’ve been in New York working with my editor up here for about a month on a new film. We shot it over the summer and I have been working on it pretty steadily since. The film is called I Used To Be Darker and it’s about the end of a marriage. It’s about a divorce and how it affects the couple involved and their 19-year-old daughter … and then, their niece as well, who arrives on their doorstep, into this chaos, from Northern Ireland. She is coming to Ocean City to work for the summer. At this point, I’m getting close to getting it ready for a festival in February.

URB: So, congratulations on the Whitney Biennial! I guess it is convenient that you’re currently working in New York. How did this all come about?

MP: This year, the museum paired up with two New York curators and film programmers: Ed Halter and Thomas Beard. They have a venue called Light Industry. They were familiar with my work, with Putty Hill, and decided to select it for inclusion for the Biennial. I think they’re seeing things a little bit differently this year, in the way that the films will be exhibited. Each film will screen for a week. So, Putty Hill will be playing in May.

URB: The whole thing is such an honor, really amazing. When did you find out?

MP: It’s very exciting. There’s been a great response to the news so far. Of course, for me, it’s a career pinnacle. I found out back in November when we helped to put materials together for the print catalogue for the show … I think the publication is more expansive than they’ve done it before, so we get six pages. We’re including a conversation with another Baltimore artist and musician, Matt Papich.

Photo by John Jones. Porterfield on location of I Used To Be Darker

URB: When I heard the news, the first thing I thought of was that scene from the John Water’s film Pecker, where the art dealer shouts, ‘It’s the Whitney, Pecker! The Whitney!’ And he is clueless, but it’s such a big deal, especially because an artist from Baltimore is being exhibited there.

MP: (Laughing) I hadn’t thought of that! But that’s awesome. I do remember that scene, actually … Well, another awesome thing happened recently, too. I’ve been selected, along with my writing partner, Amy Belk, for a Creative Capital grant. That just happened and we just did a weekend-long orientation for that.

URB: So the grant will fund your next film?

MP: Yes, it will support my next film. They’ll support us artistically as well and it’s such a great network. It’s a great honor to be selected.

URB: So, the Sondheim Prize was last summer, and then the Whitney, and now Creative Capital. It sounds like you’re going to be in New York a lot, and all over the world, really. Has Baltimore lost you?

MP: Oh, no. I absolutely still live in Baltimore. I’ve just been in New York for a month. For at least another year or two, I’m planning to stay in Baltimore. I’m really happy here and I love teaching at Johns Hopkins. Baltimore is still where I want to make movies. The only thing that could take me away would be if I could do a residency somewhere else for six months or a year. That’s something I definitely think about.

Photo by Andrew Laumann/ A scene from Putty Hill. Courtesy of Cinema Guild

URB: Do you see yourself ever making films outside of Baltimore?

MP: Maybe. I have three ideas now that are germinating, that will become screenplays in the next few years. They are not as technically tied to Baltimore as some of the other films. They could be made elsewhere, if the economy necessitated it … but they could also be made really well in Baltimore. I want to stay flexible and keep working. I want to challenge myself. I don’t see myself making a film outside of the U.S., but I could see myself making a film in a different U.S. city.

URB: From what I have read, they will keep film in a separate gallery, rotating the film screenings with the more permanent, traditional works downstairs. How does this work out for you?

MP: It’s good. Each filmmaker gets one week for screenings in the second floor gallery, in a theater … At this point, the decision has been made to screen at specific times, but, essentially, it’s set up for a week per artist, with conversations on Sundays, where the filmmaker presents the work to the audience and answers questions

URB: As a filmmaker, it seems like a big challenge, to bridge the gap between a fine art or museum setting, with a film typically viewed in a theater, a feature-length film. After two years of Sondheim finalist exhibits at the [Baltimore Museum of Art], and now at the Whitney, it seems you are managing this conflict really well. How did your last installation exhibit for the Sondheim come together? And, for the Whitney show, do you get to make those kinds of decisions—how to best exhibit your work—or does someone else?

MP: The Sondheim installation was really liberating for me. The project came together organically when I found out I was a finalist. I was thinking about what I’d been doing, the work I’d been creating, the stuff I’d been accumulating that was outside of the narrative tradition, which is where I spend most of my time. When I thought back about the work I had been doing, the images I was accumulating that were outside of the narrative tradition, I had these photos and wanted to figure out a way to animate them, if you will. I built the work from the material itself, which was right there. For the Biennial, the main curators, Jay Sanders and Elizabeth Sussman made the decision, along with Tom and Ed from Lightworks. All four of them have all been working together on the film component. That’s the team.

URB: Since you’ve been awarded all of these incredible opportunities has your life changed a lot?

MP: Well, not really. In a lot of ways my life hasn’t changed at all. But, I do get to travel more. I mean, Putty Hill and Hamilton have led me to a lot of festivals, and now that Putty Hill and Hamilton are being released on DVD in France and Germany, I’m making more connections on an international film scene. … I hope it makes it easier to finance and distribute films in the future. Initially, the Sondheim Award has made a huge difference. My quality of life has improved lately, quite a bit in the past year. That’s for sure. But I still live in Baltimore and I am still teaching screenwriting and film theory to undergraduate students at Hopkins. Maybe I am just in Baltimore a little less than before.

URB: Your films seem different to me than many of the film or videos you see in a gallery setting. For one thing, your movies are narrative-driven. They have a plot. You don’t typically see that type of film as much in a museum.

MP: I’m trying to figure out a way to make the new film, the one we received Capital support for, a little bit more cellular, so that it might fit into a museum or gallery better. It’s called Take These Broken Wings and it’s about a guy my age, mid-30s, on house arrest. We’re thinking about it in two ways: a work that reads theatrically, a traditional narrative, but to also figure out a way to shoot footage and edit it so that it has a different approach to time, so that it is more of a fit for traditional art venues. It’s exciting because it requires fundamentally a different approach to time.

URB: I think it’ll be really interesting to see in the next year or two where you go. Do you feel pressured by all the success?

MP: I feel very free to make the films I want to make, to aspire to work with my collaborators. I can only anticipate that the films’ budgets become greater; with that, when you have more of an investment, [it] requires a greater recoupment, there’s added pressure and a greater sense of responsibility. But I think that’s a healthy part of a film career. At some point, I’d love to direct a screenplay that I wasn’t involved with writing, or adapt a literary work or an existing film. I dunno—there’s a lot of things that I want to try.