Division of Labor at Current Space Reviewed by Cara Ober

Photos from The Aesthetic of Intimacy at Goucher& [...]

Division of Labor at Current Space Reviewed by Cara Ober 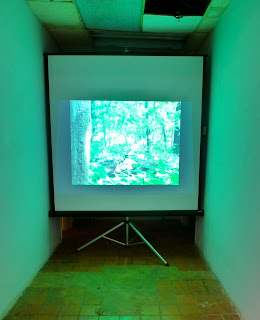 Current Space, a local arts collective, has been a staple of the Baltimore arts scene for more than ten years. However, in its new home on Howard Street, the arts hub has turned a corner, progressing from a youngish, hip gallery to a more mature, confident, and sophisticated presence. The newest group exhibition, Division of Labor, is an elegant selection of works by artists from Baltimore, Los Angeles, Philadelphia, and Chicago united by their predilection for laborious, time-intensive process in an age of immediate, digital overload.

Wait a minute: Don’t all artists share a commitment to long hours in the studio? Don’t all artists work meticulously and carefully on the pieces they create? While this is true on a surface level, Division of Labor takes this a step further, choosing artists who elevate their painstaking process to art in itself. While most artists employ an intense work ethic in order to produce a specific product, the artists in this exhibit value their process over all else, including the products, which exist as evidence of their labor, but not as the goal.

If this seems esoteric, that’s fine with co-curators Skye Gilkerson, Jason Meyer, and Christian Donnelly, who describe creating by hand as a “potent and rebellious act” in an age of mass manufacturing and consumption. Although the works exhibited in Division of Labor run the gamut of traditional group show offerings—drawings, mixed media collage, installation, sculpture, performance, and video—they seek to illuminate the importance of rigorous process and to investigate relationships between “old craft traditions and new craft inventions in contemporary art practice.”

On opening night, Renee Van der Stelt, a local artist and professor, does a “drawing-based performance,” standing behind a large desk, covered with large sheets of paper, X-ACTO knives, pencils, and rulers. I watch as she repeatedly positions the ruler in parallel lines, scores the paper with the knife, and then folds the paper. Flanked next to her on the wall are several of her finished pieces, which appear to be impossibly dense thickets of tiny drawn and incised lines. “I’m supposed to be doing a performance,” she says, “but I’m more interested in having a conversation about drawing. I’ve been trying to pare my process down to just a few elements: the ruler, repeated straight lines, repeated folds, and the mistakes. Doing this by hand, there are always a number of mistakes that happen, and learning to live with them is essential.”

Her cheerful nature, as well as her readiness to discuss her reasons behind the simple, repetitious process she has adopted, draws a steady stream of curious viewers. The discussion proves to be just as essential as Van Der Stelt’s delicate drawings, and enhances the viewing process significantly. I inquire as to how she knows when a drawing is finished. “It’s when the paper is almost falling apart and I can’t add any more lines without destroying it,” she says. Although this process-over-product mantra isn’t as obvious in some of the other works in the show, Van der Stelt sets the tone for the entire group, which is unpretentious, curious, and industrious.

Across the room, a large wax sculpture by Baltimore artists JK Keller and Keetra Dean Dixon dominates the conversation. Displayed on a low pedestal, the piece reminds you of a giant bar of soap cut in half longwise, but with the colorful striations present in the cross-section of a tree. The word SUDDENLY is rendered in three-dimensional relief at the center of the thing, and it appears to have been created by repeatedly dunking the words into different colored wax, until it grew, layer by layer, not suddenly at all, into a heavy, intricate form. Next to the sculpture, viewers buzz around a text-based work by Philadelphia artist Michael Ellyson. Although it’s mostly unfinished, that apparently doesn’t matter. Ellyson’s work is an actual King James Bible, leather-bound and displayed on a pedestal, where the artist has used White-Out to cover each page line by line so that he could write the text of Darwin’s ‘Origin of Species’ back in with ballpoint pen, in his own handwriting. Not unlike the monks who originally spent thousands of hours hand-copying the holy book, Ellyson’s process is one of devotion and cramped fingers, undercut with an ironic political and religious message. However, the giant weight of his undertaking takes precedence.

Addressing the hugely popular commercial craft movement, Mary Smull’s small needlepoint images, framed on a back wall, marry the kitschy paint-by-numbers products with the raw materials that produce them. The top half of each image depicts a pastoral scene, rendered in chunky value shapes, while the bottom includes only strips of color created by following color instructions while ignoring the shapes. Smull’s works are colorful and pretty; her improvised stripes remind you of abstract color field paintings, which are significantly more satisfying than their pictorial top halves. The disconnect between the prescribed and the invented sections of the image creates a memorable contrast and serves as a clear reminder of the potential within the painstaking labor of traditional needlecraft.

In the back corner, people gather in front of a video projection, titled Attempt at Perpetual Motion, by Los Angeles-based David Prince. In the video, Prince, a self-described sculptor, explorer, and lumberjack, chronicles the journey of a tree from a forest to its eventual incarnation as a wooden slinky, endlessly climbing down a set of escalator steps in a shopping mall. Loving detail, as well as a compelling narrative, creates a magical realism where objects and living organisms take on a life of their own.

Thanks to Division of Labor’s variety of products, there are a number of disparate outcomes presented. Some of the artists in the exhibit utilize a painstaking, labor-intensive process to gain an inner transcendence, while others use it as an excuse to slow down, to exist in the present in a constant state of possibility. The disparity in the reasoning behind the work actually makes this show more interesting and provides a number of persuasive reasons to turn off the media, to stop tweeting and texting and Facebooking, and simply exist with your materials.

News & Opinion
Field of Potential: Regarding the Quotidian as Art
Even as much of the art world retreated to the safety of the internet, some creative workers continued their trade in the public sphere
, Kerr Houston — April 2, 2020

News & Opinion
We Are All Alone Together
On being alone, whether by choice or quarantine

For those lucky enough to be healthy after two weeks of quarantine, you can hug, kiss, dance, and snuggle. Don’t take this for granted.

Baltimore residents hired musicians to perform a few songs, stoop-side, at a safe distance for family, friends, and neighbors.