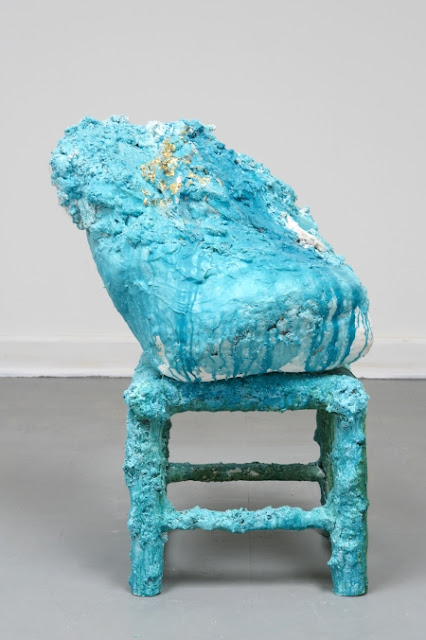 Working against convention, these artists are putting into practice an “abject expressionism” in respect to materials, composition, color and form, sharing a rogue sense of what constitutes beauty. Among other things, the works in this exhibition reflect an instinctual acting upon surfaces or materials. The artists’ touches are visible, active, and at times assertive–each tear, scrape, twist and drip intentional and impactful. Comprised of paintings, sculpture and the in-between, Primary is not interested in complete resolution and finishing touches–just warm embraces of the imperfect, irregular and open-ended.

Primary opens on August 17, 2012, with a reception for the artists from 6-9pm.
The exhibition runs through September 14, 2012.
Nudashank is located at 405 West Franklin Street, 3rd floor, Baltimore, MD 21201.
The gallery is open by appointment only; please contact nudashank@gmail.com for scheduling.
For additional information, please visit http://www.nudashank.com.

Tatiana Berg (b. 1985, Washington, DC) has participated in a number of group exhibitions, including Three Points Make a Triangle, Queens Museum, New York; Déjà vu, Regina Rex, Queens; Haymaker, Freight + Volume, New York. This is Berg’s third exhibition at Nudashank; her work was included in Chromatose (2009) and New PainTHINGS (2010). Berg received a BFA from the Rhode Island School of Design, and attended the Skowhegan School of Painting and Sculpture in 2010. She is currently an MFA candidate at Columbia University.

Stacy Fisher (b. 1974, Norwalk, OH) has exhibited extensively in New York at Jeff Bailey Gallery, Allegra LaViola, Thierry Goldberg, Cleopatra’s, Churner and Churner, and Horton, among others. Upcoming exhibitions include a two-person exhibition with Allison Miller at Weekend, Los Angeles. Fisher is a graduate of Cleveland Institute of Art and Ohio State University.

Amanda B. Friedman (b. 1984, Washington, DC) has studied at the Glasgow School of Art, Scotland and the University of Vermont. Her work has been included in exhibitions at Vox Populi, Philadelphia; Clifton Benevento, New York; Recess, New York; The Institute of Contemporary Art, Boston; and Artists Space, New York. Friedman has curated exhibitions at NurtureART, Brooklyn and Nicole Klagsbrun Gallery, New York. She is currently on residency at the Shandanken Project in upstate New York.

Joanne Greenbaum (b. 1953, New York) is represented by D’Amelio Gallery, New York. Her work has been the subject of solo presentations at D’Amelio (formerly D’Amelio Terras), New York; Shane Campbell Gallery, Chicago; greengrassi, London; and Nicolas Krupp, Brussels, among others. Recent group exhibitions include UP DO, Jeff Bailey Gallery, New York; A Painting Show, Harris Lieberman, New York; Painting as Fact, Fact as Fiction, de Pury & Luxembourg, Zurich; and Stuff, Museum of Contemporary Art, Detroit, among others. She is a graduate of Bard College.

Clare Grill (b. 1979, Chicago, IL) holds an MFA from Pratt Institute, Brooklyn and the University of St. Thomas, St. Paul, MN. She attended Skowhegan School of Painting and Sculpture in 2011. Her work was included in exhibitions at Marc Jancou Contemporary, New York; the Center on Contemporary Art, Seattle; Edward Thorp Gallery, New York; and Roots and Culture, Chicago, among others.

Fabienne Lasserre (b. 1973, Ottawa, CA) has attended Columbia University and Concordia University, Montreal. She is represented by Jeff Bailey Gallery, New York and Gallery Diet, Miami. Her work has been shown at Jolie Laide, Philadelphia; Sikkema Jenkins & Co., New York; Larissa Goldston, New York; and the Mai Centre, Montreal, among other venues throughout the US, Mexico, Canada, South America and Europe. Currently, Lasserre is an adjunct professor at the Maryland Institute College of Art in its painting and foundations department.

Lauren Luloff (b. 1980, Dover, NH) has participated in a number of exhibitions in New York, including Dark Interiors and Bright Landscapes, Halsey McKay; Stretching Painting, Galerie Lelong; Painting Expanded, Tanya Bonakdar; Recent Small Works, Horton; Wind, Beach, amd Still Life, End of Century; Material Issues and Other Matters, CANADA; and Not the Way You Remembered, Queens Museum, among others. Luloff holds a BFA from Pennsylvania State University and a MFA from Bard College.

Elisa Soliven (b.1975, New York, NY) is a graduate of Hunter College and Bryn Mawr College. Her work has been reviewed by Two Coats of Paint, the Village Voice, and Time Out New York. Her work has been included in group exhibitions at Vaudeville Park, Brooklyn; Janet Kurnatowaki Gallery, New York; Pierogi, Brooklyn; Diamatina Gallery, Brooklyn; and the American Academy of Arts and Letters, among others.

About the gallery Nudashank is an independent, artist-run gallery space in Baltimore, Maryland dedicated to showcasing young and emerging artists. Founded by Seth Adelsberger and Alex Ebstein in March of 2009, Nudashank shows national and international artwork in group, 2-person and solo exhibitions.

News & Opinion
The Internet Is Exploding: 10 Must-Read Articles This Week

The internet was chaotic this week, but patterns are also starting to emerge.

News & Opinion
Fever Dream: Symptoms, But No Covid-19 Tests and No Results
It took eight days of coronavirus symptoms and a trip to the ER to get a test

The US has known about COVID-19 since January. Why are there not enough tests?

The town of Bacurau fights back, they do some damage, and it feels like a victory for its characters and for viewers, a blueprint for imminent direct action and self-defense.

News & Opinion
Take Care of Yourself: On Chronic Illness and Anxiety
Organizing my memories into a semi-linear timeline gives me a whisper of peace

The cruelty of our government is overwhelming.