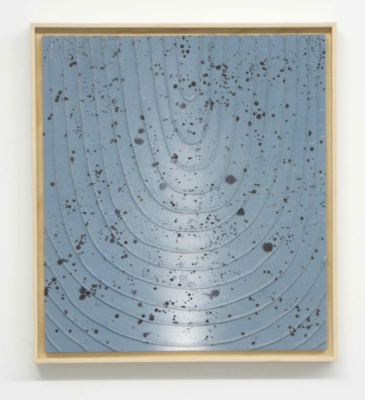 It’s a crisp autumn Saturday night. Standing within the small, brightly lit rectangular space of sophiajacob — the elegant new artist-run alternative, located on the burgeoning west side of the city—the usually gregarious and witty Alex Ebstein is clearly nervous. This is understandable. It is the opening of her first one-person exhibition of paintings and the turnout is expected to be high, in keeping with her local popularity.

Ebstein first came to recognition in Baltimore as a photographer documenting the local art scene in a flattering dance club style on her blog There Were Ten Tigers. Soon after, with partner Seth Adelsberger, she founded the now highly regarded Nudashank Gallery on the third floor of the H&H building, a local mecca of warehouse culture. Since that time the two have curated numerous innovative exhibitions, presenting styles and formats that are now di rigueur for the World Wide Web youth quake art generation they maneuver so well. Increasingly Ebstein’s name has become associated with curatorial savvy —finding and exhibiting promising young talent on their way up, as well as writing art reviews for City Paper.

Recently, Ebstein moved away from photography as her main personal creative endeavor and began creating new paintings/constructions—an enticing switch. This made news of her impending solo show of great interest. Unfortunately, early PR for the exhibition included a mangled and overwrought artist statement using obtuse jargon that clarified little and, instead, dimmed expectations. It suggested that the visitor would be in for yet another set of clever neo-milennial irony-laden one-liners, the type of which we have seen too much of lately.

But, viewing the body of work, it becomes obvious that Ebstein sidestepped all potential pitfalls the artist statement had proffered and, instead, offers up an impressive and cohesive collection of paintings that are well executed, and inviting. Using various types of string and twine laid out, glued to, or strung across, above and inside geo color-field surfaces, the work playfully creates illusions that invite the viewer into their maze-like constructions. Her color palette is muted, earthy, and harmonious—rare in these days of high chroma histrionics. Likewise, the construction of the work is firm and infectious, yet is in some ways quite traditional. Moving from painting to painting in this well curated exhibition, one lingers following the interplay of perception, disruption and overlapping ways of seeing— all abstractly rendered.

An added bonus, the gallery produced a lovely catalog to accompany the exhibition, with color photos of the work and an interview with the artist. The interview addresses the expected issues, such as what is the meaning of craft material in a high art setting, etc. But the most revealing part of the general Q and A is when it veers into a very serious personal issue— Ebstein has suffered from severe glaucoma for many years, starting in grade school, which has only recently “stabilized” through four intense surgeries, some quite recent. It seems she has literally made her way back to the light and her perceptions and feeling have changed and altered all along the way.

This is profound to consider…. the very potential end result of glaucoma the artist faced is blindness. Imagine the angst such a situation produces, the potential for anger and self-pity, and so much more. Ebstein admits in the interview that she has gone through her share of all conceivable emotions. But what she has done during all this time is telling—she has intensely pursed a life focused on VISUAL art with admirable verve and actually using visual art to document the malady for some time. To understand this detail about the artist (without glamorizing the issue or defining the artist solely as a victim of disease, which would be both simplistic and odious) is to possibly understand at least a part of what makes her work so compelling. Her current art deals with special visual formations and lines of sight because Ebstein is operating through this topic by way of a deep understanding and contemplation that few others can know.

In her own way, Ebstein is creating a codified system of personal signage, where linear pathways converge and hover over a milky color plane. By literally cutting into the surface, the artist strategically plays two and three dimensions against each other, a visual commentary of the meta-visual and shimmering disruptions of perceptions. Ebstein understands this style of perception acutely because she has lived it.

The artist stated when being informally interviewed for a few moments at the opening, that her work referenced Modernism for inspiration. When questioned on her definition of Modernism, which seems dicey, she stated she thought of it as a time period. This is, opposed to the more widespread academic definition. But OK—because while her simplistic definition could be argued as problematic it is right on target when one looks at the work overall. Artists such as Arp and his contemporaries are clearly a deep influence.

Painting by definition is now almost always mining it’s past, and has become so self-referential it’s potentially a black hole of nods and winks only the initiated get to partake in. The trick then is to make art that is referential, yet updated and empirically one’s own. Ebstein has done exactly that here. The final question arises then when drawing so heavily on the past, is one simply dabbling in nostalgia? This is something the artist will have to consider in the future. But for now she can rest easy, this first show is a surprising success—a sublime, intelligent, humanist exhibition set amid very fetching formal attire.

– Jack Livingston is a writer, editor, and artist living in Baltimore. He is one of the Executive Editor of Radar Redux.

Jang is a conceptual artist, a popular tattoo artist, and a renaissance creative with a grip on what it means to make exciting and thought-provoking contemporary artworks in various forms.

From Ghana to Benin, Benin to Nigeria, Ajanku has apprenticed with master dyers who retain knowledge of traditional indigo dyeing techniques, an art that is being lost to synthetic processes.