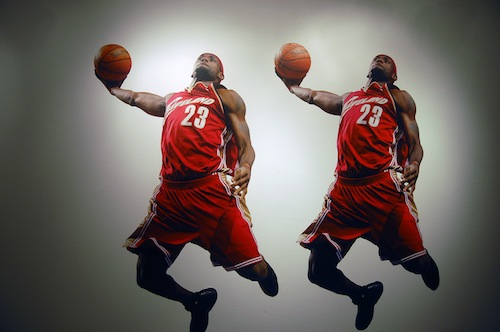 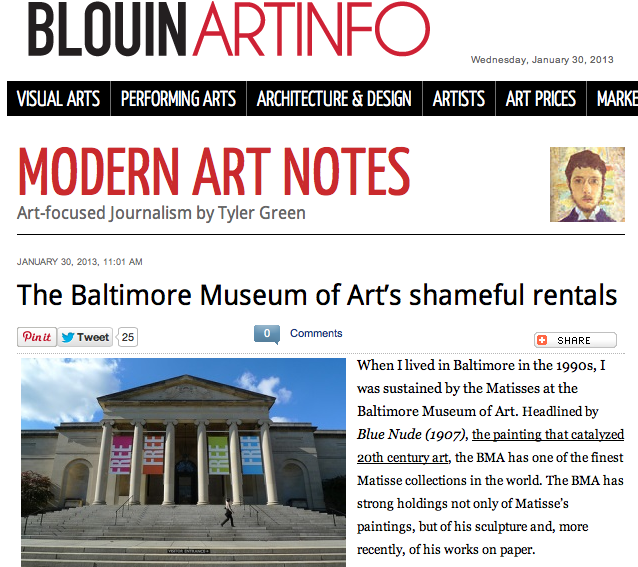 I guess we should all thank Tyler Green for his willingness to shake things up here in Baltimore. According to the DC-based art writer, The Baltimore Museum of Art, and its board and director, Doreen Bolger “should be embarrassed and ashamed” for renting out a significant portion of its world renowned Cone Collection to the Indianapolis Museum of Art for an October 2013 Exhibit.

Although Green has recorded a podcast at the BMA and his top ten list of 2012 included the museum’s new Sarah Oppenheimer installations, he claims the museum is “increasingly uncommitted to sharing its unique Matisse experience with today’s Baltimoreans” by choosing revenue generation over integrity. He says that this particular rental deal is especially bad behavior because local voters supported the museum through bond initiatives and other types of tax-funded grants and because the Matisses in the BMA’s Cone Collection are the most significant, world-class works of art in the whole place.

Beyond all this, Green argues that the Cone Collection rental violates the museum’s relationship with the state of Maryland and the city of Baltimore. Making money by renting out a collection to another museum “re-monetizes” art that the museum has de-monetized via their non-taxable status and Green believes that the museum owes it to Baltimoreans (and Marylanders) to show their best work HERE and not in Indiana.

In a perfect world, yes, all the best Cone Collection paintings, drawings, and sculptures will always be on display here in Baltimore and we’d have enough room and perfect lighting to show it all. However, when a local museum is forced to search for “creative” ways to drum up lost revenue, especially after admission became free for all visitors several years ago, I hardly see this as the tragedy Green purports. Sure, it’s kind of annoying, but I don’t fault the BMA (much) for sending these works to Indiana. The Pink Nude is always my favorite. It will be in Indianapolis, so make sure you visit her before and after.

Tyler Green is entitled to his opinion and his journalistic tenacity is appreciated. However, his disparaging remarks about the museum and city weaken a well-researched assertion into a personal diatribe. When his article meanders into narcissistic personal reflection, the nails miss the coffin. He admits that he hated living in Baltimore (when? for how long?) and described it as “America’s saddest example of urban abandonment.”

He went on to say, “I was making only about $350 a week, so going to the BMA was about all I could afford to do. I visited the museum at least once a week, trying to learn Matisse’s methods, his successes, and his progression.” Ah, yes. Poor guy. And this was, I presume, even before the museum was free to visit, so you get the picture: Baltimore was so horrible and the Matisses were so great, this was the only thing keeping him sane. In a cultural wasteland, those paintings were his salvation. Really?

Although renting out our beloved Matisses for a few months is far from ideal, the BMA owes itself to stay solvent. It owes Baltimoreans to continue to collect significant works from living artists. It owes Marylanders to continue free admission for all visitors. The museum has over 90,000 works in its permanent collection – surely there is something surprising and delightful they can pull out of their vault for the month of October?

According to Green, “When the BMA takes its most wonderful art and rents it out to another place, it’s thumbing its nose at its home.” As a local artist and supporter of the museum, I don’t see it this way. Honestly, what is the museum spending these large sums of rental money on? Electricity? Heat? Art books? Are the curators pocketing big bonuses this year? Oh, right, the museum is spending millions of dollars on renovations, while continuing to stay open during their regular hours.

While renting out the best the BMA has to offer may not be a popular decision with museum visitors and local tax-payers, in part because of Green’s finger-pointing, it’s time to recognize that traditional funding models are in a convoluted process of change. Large cultural institutions have to consider their responsibilities to the public, to the historical collections they contain, but also their bottom line.