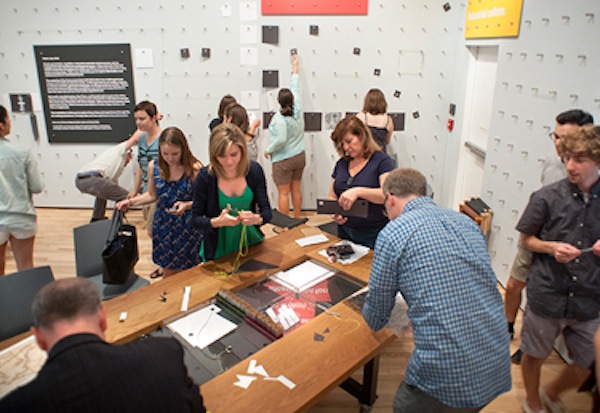 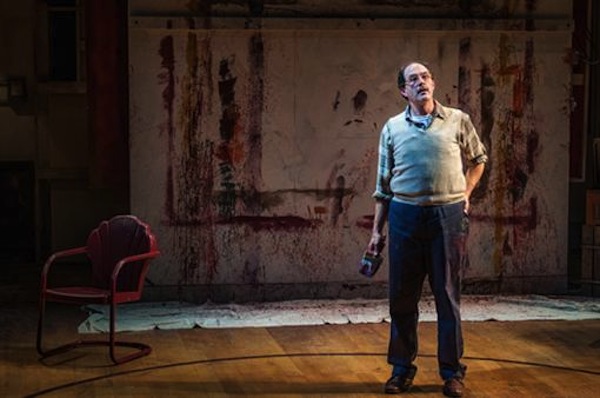 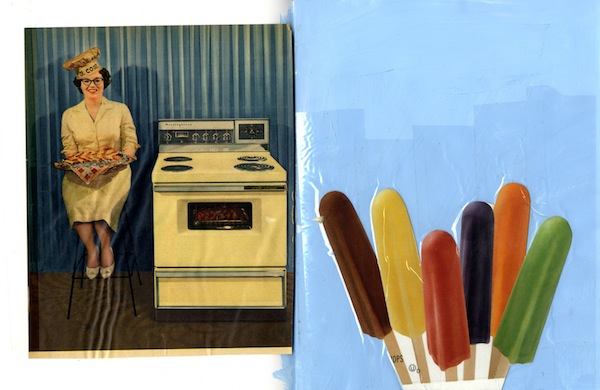 Looking inside an artist’s sketchbook is a bit like opening Pandora’s box. Each is a unique entity filled with the mischief and chaos of an artist’s ever-churning mind. Strikingly intimate, an artist’s journal can be the amalgamation of many things, as private as a diary or as functional as a grocery list. Sketchbook, the current exhibition at School 33 Art Center, features over 100 different sketchbooks by 34 artists. On view until December 21st and curated by Exhibitions Coordinator René Treviño, the exhibition takes a unique approach to highlighting the sketchbook as a medium in itself.

Sketchbooks can be a challenge to exhibit, but Treviño has dramatically animated the gallery by wallpapering it, salon-style, with close to a hundred enlarged cross-sections from the featured sketchbooks. The large, 2×3 foot images and the festive hanging create a sense of livelihood and immersion in the gallery space, which would be lost if the exhibit featured only sketchbooks and white walls. In addition, the transition from petit sketchbook page to poster-sized enlargement highlights the diversity of approach and variety of function that each artist utilizes, while also creating a shift in perception that causes the viewer to appreciate these objects in a novel way. Although the wall hangings are compelling, I found the content of the artist created books the most engaging aspect of this exhibition. Despite their generally slight size, the sketchbooks have a robust presence in the gallery. Placed on central tables, viewers are encouraged to handle the books wearing white cotton gloves, which creates an additional sense of reverence for them as art objects. A receptacle for a majority of the artist’s thoughts, feelings, plans, ideas, contacts, and receipts, sketchbooks rarely get any appreciation as a unique works of art unto themselves. It’s generally an artist’s large, finished works that earn the honor of exhibition in a gallery, while the sketchbook is left on a presumably dusty studio shelf.

In this exhibition, the artist’s sketchbook presents the viewer with a unique and rewarding experience. It is rare to have unfiltered access to an artist’s process, an opportunity to see and think like the artist, to step directly into their stream of consciousness. An appreciation for diversity of approach and variety of function is palpable when flipping through the pages of these books.

There is a raw quality in some of the sketchbooks, which directly connects the viewer to the artist-maker, a connection that can be lost in the clinical sterilization of a ‘white cube’ gallery space. Some of the books had a sense of narrative and planning, while others were messy, chaotic, and cathartic in nature. Filled with memories and mementos, many of these journals mark the passage of time in the artist’s life with collections of keepsakes from mundane daily life. Tags from teabags, receipts, scribbled contacts and plans for forthcoming work, were mixed in among images of loved ones and the persistent nagging and reoccurring thoughts that come with the daunting task of making meaningful works of art. I was particularly drawn to Tracy Jacobs’ enlarged composition featuring a collage of thank you’s pulled from behind the cellophane window of security envelopes. Her lighthearted approach is echoed by Jonathan Smith’s sperm whale drawing, which produces a school-girl giggle. The range and reach of a sketchbook can be complicated, though, and subsequent pages of Smith’s journal reveals a complex woven spider web of a mind map and a humorous personification of Hemmingway’s “A Farewell to Arms.” School 33’s Sketchbook provides an unrivalled opportunity to understand and appreciate an artist’s unedited thought process.

In addition, the exhibition presents different functions and manners in which the books were constructed. Some were clearly purchased to perform as journals or sketchbooks while others had previous lives as famous works of literature, vinyl records, and even the derriere from a pair of old pants make an appearance as the cover of the varying workbooks. A diversity of medium and style are represented in this show, and it ranges from pencil to pen and ink, cut paper and collage, to watercolor and photomontages. Many which utilized bolder formal choices stood out on the walls, and encouraged the viewer to find the corresponding sketchbook. Lori Larusso’s enlarged work is a collage of bright colors and cut paper, and creates the illusion of June Cleaver and simpler times, when all you worried about was what mom’s making for dinner and popsicles on the sidewalk with friends. Katherine Nonemaker’s work depicts an urban landscape in pen with a relaxed hand and subtly embellished with a limited color palette. Linda DePalma’s enlarged image of a pen and watercolor sketch of an eyelash curler enhanced by a wash of sunny yellow, while the background is made of the repeating semi-circular pattern of the curler.

When a viewer is given unrestricted access to the private sketchbooks of artists, a significant shift in perception occurs. When we handle and browse through the arcane musings of an artist, the myth and mystique of the lonely genius is stripped away. This sense of authentic connection is like stumbling upon an unexpected treasure or an old family album, and it manifests itself in the desire to learn more about particular artists and their daily practice. Best of all, Sketchbook leaves you with the feeling that you’ve only begun to scratch the surface of something that goes much deeper.

SKETCHBOOK will be on exhibit at School 33 through December 21, 2013

* Author Allison Gulick currently works for the Office of Community Engagement at the Maryland Institute College of Art (MICA). She has her MFA in Curatorial Practice from MICA and a BA in Art History from the University of North Carolina at Asheville. Her previous curatorial work includes the exhibitions: Fan Brush: An Exhibition of Work by Matt Muirhead, Reloading the Canon: African Traditions in Contemporary Art; Invited: Celebration Station; Live and In Person: Globe Posters at MICA and The Meyerhoff Symphony Hall; and La Riqueza Del Pueblo: The Richness of the People. Allison has an addiction to coffee, chocolate, books, and British period dramas.  She has a poker face that would put Lady Gaga to shame and in her spare time she rescues feral cats.