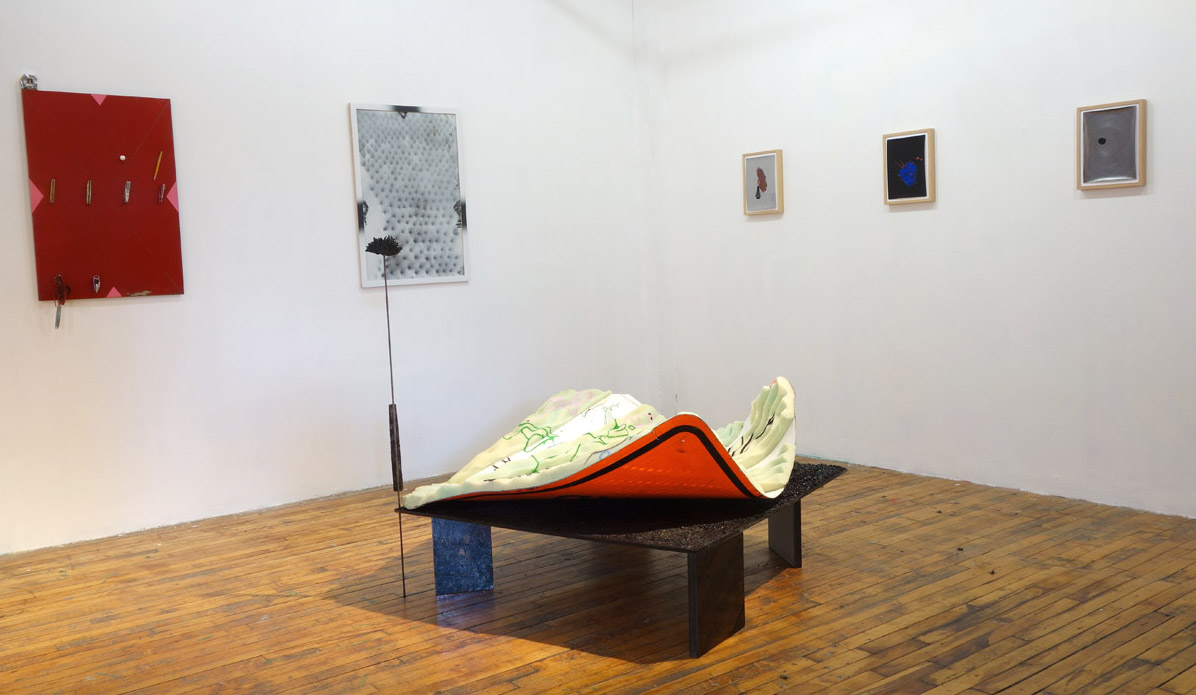 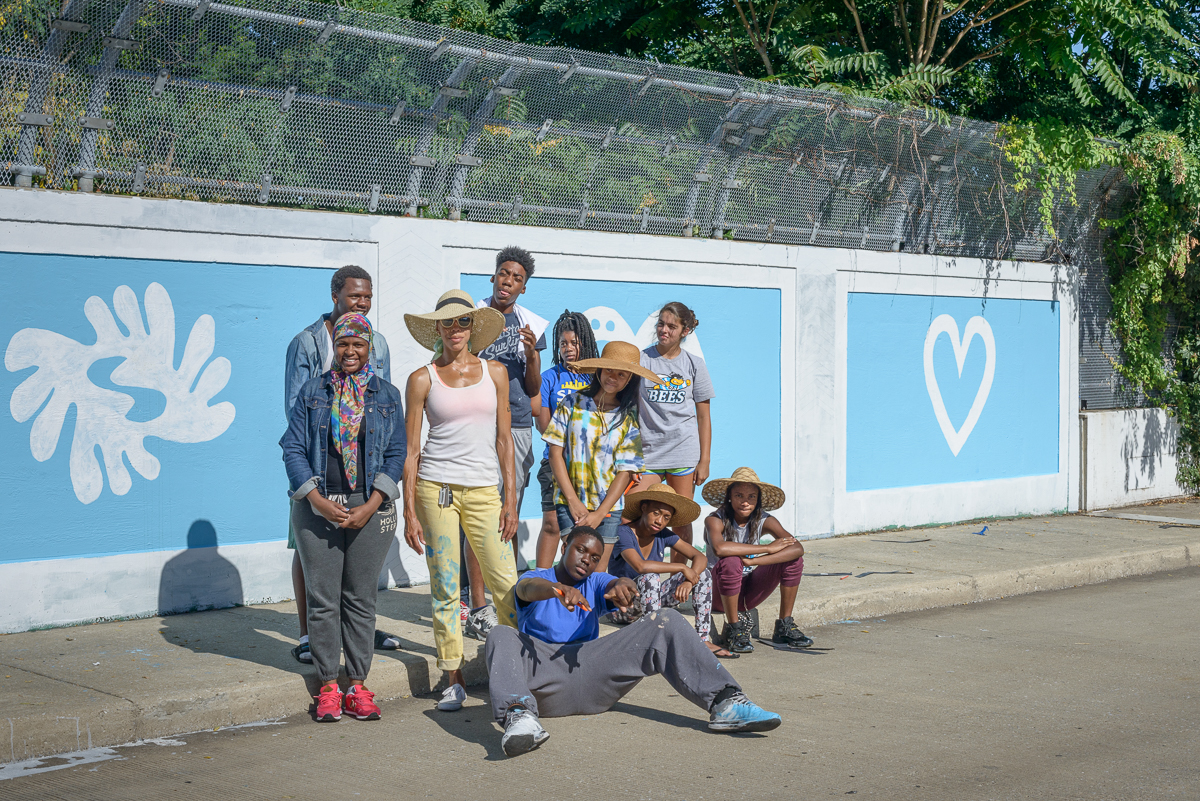 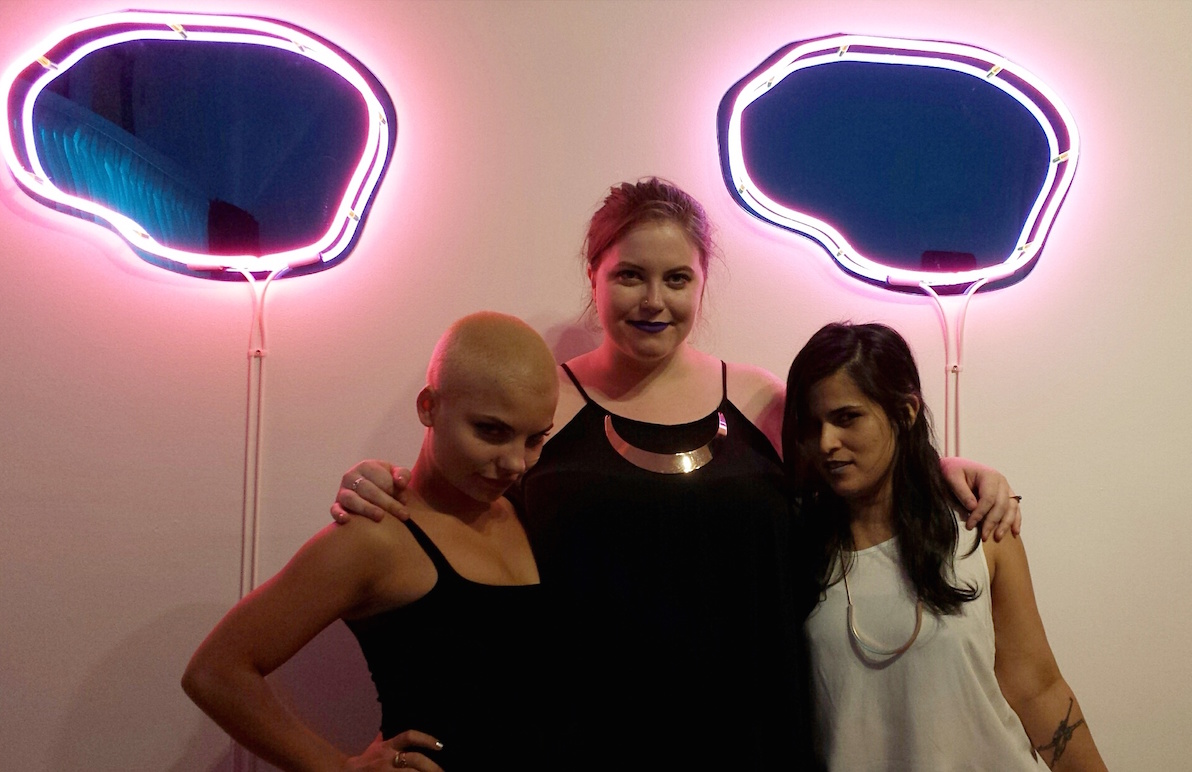 Her exhibition, “The Whole is Other than the Sum of the Parts,” opened Saturday, August 8th 7-10pm at Platform Gallery, 116 West Mulberry St. The show runs through August 31st and gallery hours are Sat-Sun 11-5pm. Dwayne Butcher: How did the title of the exhibition, “The Whole is Other than the Sum of the Parts” come about?

Esther Ruiz: The title of the show came about as I was considering how this work all fits together. I don’t remember how, but I thought of the quote “the whole is greater than the sum of all parts,” thinking that the work made more sense as a whole. While researching this quote however, I found that this is actually a mistranslation. The correct quote is the title of the show, “The Whole is Other than the Sum of the Parts.” For me, that means seeing this entire body of work at this point is neither greater nor lesser than seeing each individual piece on its own, it’s just a completely other thing. “Otherness” itself is also something I’m thinking about. . . DB: Is this Gestalt Theory something you have also been interested in?

ER: I’d say yes, I’m pretty interested in Gestalt Psychology. I think the first time I looked it up was when I was reading the introduction in Vitamin 3D (see photo) a few years ago, it mentions how Samuel Beckett says “contemporary sculptors try to make sense of the world around them” and that they “recognize patterns in the chaos.” This led me into researching Gestalt Psychology which has a similar basis. I am by no means an expert nor have I done much research on this theory but it is something I think about when I make work. I feel like it’s part of my job as an artist to see and experience the world and synthesize that information into sculptures. DB: How did you begin working neon? Was it because you were thinking of a material that can emulate as you state, “space operas, pop culture, geometry and the setting sun, creates objects that operate simultaneously as miniature landscapes from a distant future?”

ER: I actually started working with neon after I got a job at a neon studio in Brooklyn, where I still currently work.

I had been working with concrete and plexiglas about five months at that point, and was already making the smaller cylindrical sculptures with fluorescent arches. My first day on the job I knew I’d put neon in concrete someday, and 6 months later, I did just that! Neon is evocative and alluring to me, I love it, not only for its physical characteristics, but also its scientific qualities. It’s such a fascinating alchemy! As far as emulating my favorite things as you guessed, I’d say that definitely has something to do with it.

DB: Speaking of space operas. What is a space opera and where can I watch these things? They sound glorious.

ER: Hahaha, a space opera is basically a sub genre within science fiction. Most notably, Star Wars, which is my favorite movie series of all times, I’ll have to show you my X-Wing tattoo at the opening. DB: You have a minimal approach to materials and how you work with them. How does this fit with your aesthetic and what you are trying to say with the work and how the viewer responds?

ER: Much like the theories we talked about earlier, myself and my work strive to make sense of the excess of stimuli. I’m really drawn to the minimal aesthetic for this reason. By reducing forms to lines and quick gestures I think it helps me focus on execution and material. Forcing the viewer to do the same, to appreciate the simplicity of a material, symmetry and isolated moments.

Btw, love your minimal stuff!! As well as the tuna can in the sock video! DB: How do you work with both synthetic and organic materials and have them work seamlessly together?

ER: I love contrasting extremes; simple vs. complex, quiet vs. bright, synthetic vs. raw etc. etc. I think why they work seamlessly together for me, as you say, is because I try and make one preform as the other. I try and make synthetic materials imitate natural ones and vice versa. I’m a human, but I try so hard to be a machine sometimes.

DB: How did you get hooked up with Platform Gallery?

ER: Platform Gallery approached me in March after following me on Instagram! They’ve been so supportive and sweet to me; Abbey and Lydia are great ladies! DB: We first met while you were a student at Rhodes College in Memphis, TN. How did you decide to move to Brooklyn to work and talk about the transition of moving from the South then to NY.

ER: NYC! Well, funnily enough New York is actually the 6th city I’ve lived in since high school. I’m originally from Houston and moved to Seattle for college, the furthest place from Houston in the continental United States, excluding Alaska. Two years later, I moved back south to New Orleans to attended Tulane University. Then I took some time off and actually hung out in Baltimore for about a year. Then I found myself in Memphis. I decided to move to New York with an ex-boyfriend two weeks after my last class at Rhodes. I really had no real desire to come here other than to be around art and try and have a studio practice. That transition was one of the hardest of all the others. I had no idea what I was doing, compounded by the fact that I had just finished college and was in the “real world.” But it’s gotten easier with time.

I think moving out of your comfort zone is really important to your personal growth and perspective. I recommend everyone does it, just be ready to hit the ground running, but don’t give yourself away too quickly. Take your time in deciding where you want to end up, geographically and also career wise. New York is hard to get used to and it only gets bigger and deeper. You’ve got to be a fish that’s ready and open to explore the ocean of New York City. And, I have to say I think it’s easier if you have a strong work ethic, are resilient and like to engage in social activities. Now, I’m no believer in “you have to know people to get ahead”, I only had two friends when I moved here and one was my boyfriend. I think it truly is about making good work and being social. And that takes time. I never thought I was a very gregarious person, but it turns out I love meeting new people and talking about what excites me. I’m very excitable, and I think that helps me produce and put out work consistently. DB: Besides this exhibition, what else are you currently working towards?

DB: I’ll be giving an artist talk/studio visits in Baltimore at the end of this show at Platform. (Ask the gallerists for more details.) Then in September I’m in a group show in D.C. at HEMPHILL’s new space, Carroll Street Gallery. Other than that, I have a few small things in the works but I’m actually still settling into my new studio and working on some larger free-standing sculptures which is really exciting for me.

Author Dwayne Butcher is an artist currently living and working in Baltimore. He cannot believe he never knew what a space opera was until this interview with Esther. Especially since Star Wars, like all boys born in the late ‘70’s , is one of his favorite things of all time. It is not that he feels embarrassed by not knowing, he just always thought of himself as a nerd. Oh well, he can still get his nerd on by listening to Celtic music and going to the Maryland Renaissance Faire, which starts at the end of August, every weekend. He would love for you to come by his studio early Saturday morning, then he will take you to the Rennfest. Can’t Wait. You can watch the tuna can in a sock video on his site, dwaynebutcher.com.