Back to School Shopping Local 101 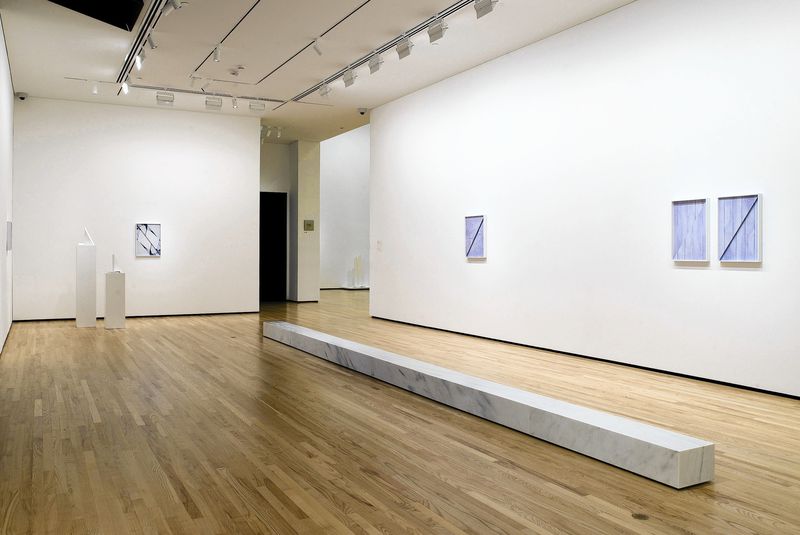 Zoë and Tim like each other. To be honest, they have to. After competing for the same position at American University, they found out they were both hired the same day.

They have worked for the last twelve years building the art department together as they see fit to benefit and increase the opportunities for their students. Zoë and Tim pretty much spend all day everyday together. Though it meant more work and longer hours, they combined their separate graduate courses into one long studio intensive class. Their studios are next to each other in the basement of the Greenberg Theatre building.

Their dogs are even dating each other.

So when Randall Scott approached Zoë Charlton about having an exhibition at his Read Street gallery in Baltimore, she really only thought about sharing the exhibition and the space with Tim.

Charlton received her MFA from the University of Texas at Austin and has participated in residencies at the Creative Alliance and the Skowhegan School of Painting. She is known for her large-scale drawings that explore culturally loaded objects. For the exhibition ally, she is showing much smaller sketch-based work than the large site specific installation recently seen in the Sondheim finalist exhibition at the BMA.

For this show, Charlton limited herself to using only a few materials, limiting her palette in order to think about using these materials in a different way, experimenting more with how to construct the pieces. She also approached this work from a playful, humorous, less precious way. As opposed to the much larger work, she says she is less concerned with having these smaller pieces make logical sense.

The new work showcases her obsession with stickers, one of the materials she limited herself to using and which she has thousands upon thousands. She has a large cabinet where she arranges them into groups. There is one drawer for clouds and trees, one for Superheroes, and another for seashells and seahorses. She states that stickers make people like things. (“The military makes a sticker and now tanks are fun!”) If she sees an image online or in a book, she will not print it out or make a copy, she will go and find that image as a sticker.

Though she does have an extensive collection, she admittedly is always on the lookout for more. One of her favorite sticker manufactures, Creative Imagination, was discounting a favorite of hers. She panicked. She went online and bought everyone that she could find on the Internet. She also bought hundreds and hundreds of other types of stickers, just in case. Zoë Charlton would very much appreciate it if you sent her stickers of African masks, African statues, and trees.

Speaking of African statues, they are another material she is limiting herself to using with this new work. She is trying to exhaust the use of statues, in as many ways as possible and in doing so, she wonders if they can become more humorous, to start to mean different things? She has removed the ground for so long in her work, but she is using the stickers and the statues as a way to reintroduce or symbolize the ground in her practice. Charlton cuts the statues out of books and magazines.

After a pile of scraps started to accumulate on her studio table, she noticed and became interested in the negative shapes left from cutting the statues out. She began to paint these silhouettes in with gold leaf. She started this as a way to force her self to make use of the ground. It does not seem contrived, but seamlessly works itself into the landscape of the work. Zoë Charlton would also welcome you sending her some gold leaf.

As much as Zoë would like the African masks, trees and gold leaf, Tim Doud would very much appreciate you sending him commodity fabrics.

Tim Doud received his MFA from the School of the Art Institute of Chicago and has received a residency to Skowhegan School of Painting. He has been awarded grants from the NEA and the Pollock-Krasner Foundation. His practice has primarily been figurative, specifically portraiture.

Doud is always working on some project/series, experimenting with new process with the genre of portraiture. He is not trying necessarily trying to save the genre, but does say that “people never trust people who do portraiture, that it is not critical painting.” He is just making the work that he wants to make.

He is concurrently working on several notable series, “Rodney,” “Blue,” and “Scotts.” Each of these series is treated very differently from each other. With “Scotts,” Doud paints a new portrait of his friend, in the same pose, wearing the same shirt, each year. The result is a slowly unfolding time-lapse of the aging process, a counter to the ubiquitous YouTube stop-motion video. The same pose for each piece is used in “Blue” as well. This time the model is the artist. These are system-based portraits, alternating between several different blue shirts, glasses, and colored grounds. They were created as a part of an assembly line. Every aspect controlled by Doud.

This is certainly not the case with “Rodney,” where the model decided every aspect, the pose, the outfits and even the titles. The outfits for some of these pieces were quite outlandish; especially when one looks at the outfits the other models wear in their respective series. These outfits being put together the way they were for the poses started Doud thinking about the fashion industry. He states, “the fashion industry has no regard to cultural context when putting together fabrics.”

He spends a lot of time alone and there is a lot of downtime when working on the “Blue” series. He started thinking about how textiles/fabrics are a particular kind of commodity, a male status symbol. He started looking at and thinking about Paul Smith, Tom Brown and Burberry in a different way. During this downtime he started making, as he puts it, “these really terrible abstract paintings, like something from Etsy.”

In making these abstract pieces he is able to use paint in a different way, processes and applications that portraiture will not allow, which is exciting for him. He has always been interested in craft and is thinking about making his own fabric. Until then, again, he would welcome any fabrics and textiles you would send his way.

Author Dwayne Butcher is an artist and writer living and working in Baltimore. He loves the idea of Bmoreart readers sending Zoë and Tim things that they wish for in this article. Dwayne has a wish list as well. It essentially involves beer. Bring a six pack to his studio and spend some time talking about Pearl Jam, chicken wings and his new work and you would be his best friend. Although Butcher does not eat bacon, bacon stickers would be awesome. Oh, he also loves cats and Old Navy slim cut pants. Check out more of his projects at dwaynebutcher.com.