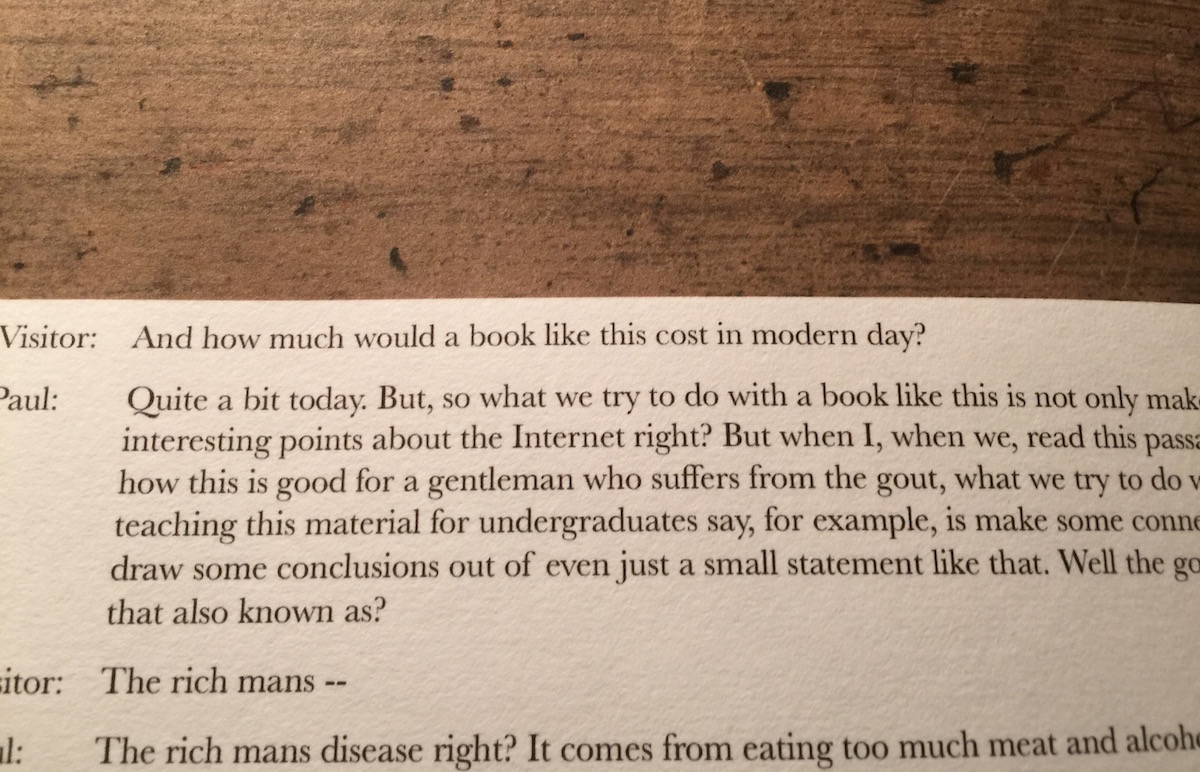 Tours available by appointment. Library closed on Monday and Sunday.

Head to the ICA Baltimore store, to purchase one of Lu Zhang’s limited edition prints from this exhibition! ICA Baltimore presents topo(log) typo(log), a series of six books documenting Lu Zhang’s yearlong studio residency at the George Peabody Library. Emulating the Dewey Decimal system of relative location, each book embodies a level of the library: General Reference; Biography; History; Language, Literature, and Translation; Science and Art; Bibliography and Books about Books. Readers are invited to navigate through the pages as they would move through the cast-iron stacks and narrow passageways of the library’s interior. Employing tasks common to a library of choosing, collecting, sorting, recording, transferring, scanning, and photocopying, Zhang reinterprets the building’s contents to create an associative and accumulative narrative that is specific yet arbitrary, expansive yet fragmentary. Gathering imagery from a wide range of sources including 18th century encyclopedias, architectural protrusions, guided tours, insurance maps, office supplies, renovation remains, and an essay on clouds, Zhang investigates the nature of work, the limitations of collective knowledge, and the poetics of place.

Additionally, the exhibition will include a selection of books curated by the ICA Baltimore from the Peabody’s collection in response to Zhang’s project, as well as books from the Johns Hopkins Library and the Maryland Institute College of Art—further contextualizing topo(log) typo(log) within library preservation theory and contemporary art movements. After the duration of the exhibition, the six volumes will be acquired and cataloged by the George Peabody Library, becoming a part of the permanent collection.

Lu Zhang (1983, Chongqing, China) lives and works in Baltimore, Maryland. In 2013, she received a MFA in Painting from the Frank Mohr Institute in the Netherlands. She received a BFA in General Fine Arts from the Maryland Institute College of Art in Baltimore. Zhang has exhibited in the United States and abroad including shows at C. Grimaldis Gallery in Baltimore, Randall Scott Gallery in Washington DC, The Center for Art and Culture in France, as well as several exhibitions in the Netherlands. Her work has been reviewed in ARTnews, The Washington Post, The Baltimore Sun and featured in New American Paintings Magazine. Zhang has received a grant from the Maryland State Arts Council for works on paper and been awarded The Trawick Prize Young Artist Award. In 2014, she became an inaugural recipient of a Rubys Artist Project Grant in Literary and Visual Arts.

The George Peabody Library, formerly the Library of the Peabody Institute of the City of Baltimore, dates from the founding of the Peabody Institute in 1857. In that year, George Peabody, a Massachusetts-born philanthropist, dedicated the Peabody Institute to the citizens of Baltimore in appreciation of their “kindness and hospitality.” The Peabody Library building, which opened in 1878, was designed by Baltimore architect Edmund G. Lind, in collaboration with the first provost, Dr. Nathaniel H. Morison. Renowned for its striking architectural interior, the Peabody Stack Room contains five tiers of ornamental cast-iron balconies. The library collection contains over 300,000 volumes largely from the 18th and 19th centuries. Notable collection strengths are archaeology, British art and architecture, British and American history, biography, English and American literature, Romance languages and literature, Greek and Latin classics, history of science, geography, and exploration and travel including a large map collection. The George Peabody Library is now a part of the Special Collections Department of Johns Hopkins University’s Sheridan Libraries. Maintaining the provisions of Mr. Peabody’s original gift, the George Peabody Library is a non-circulating collection open to the general public.

topo(log) typo(log) is made possible in part by a Rubys Artist Project Grant from the Greater Baltimore Cultural Alliance.