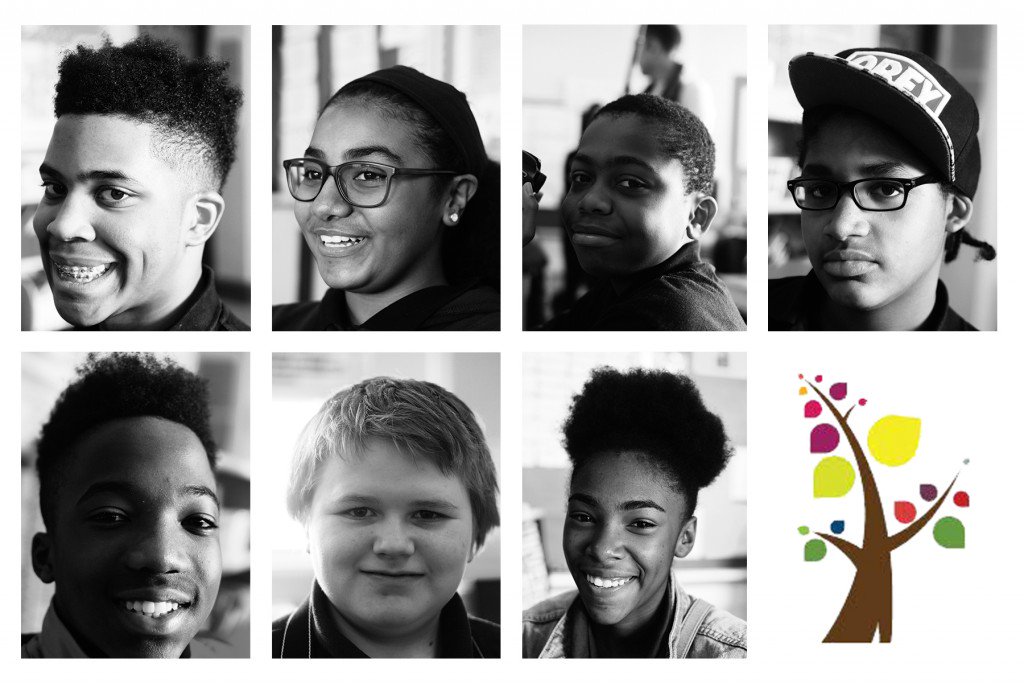 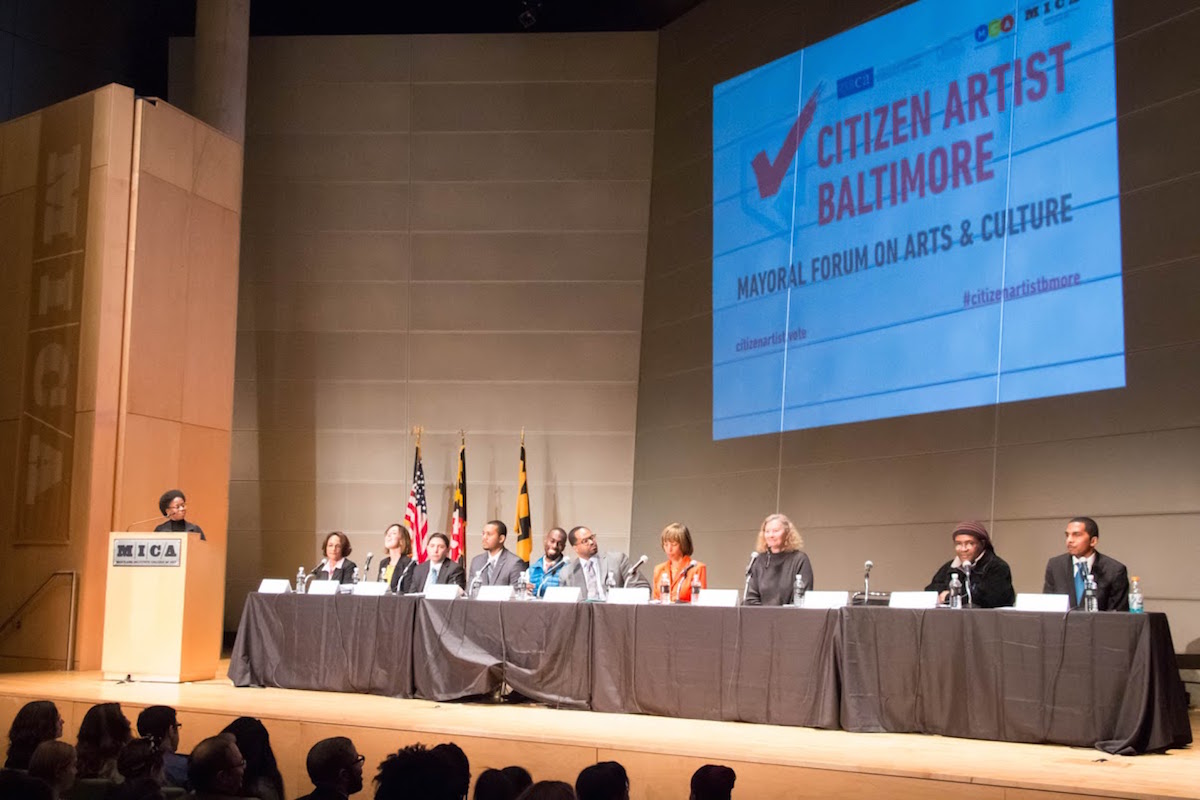 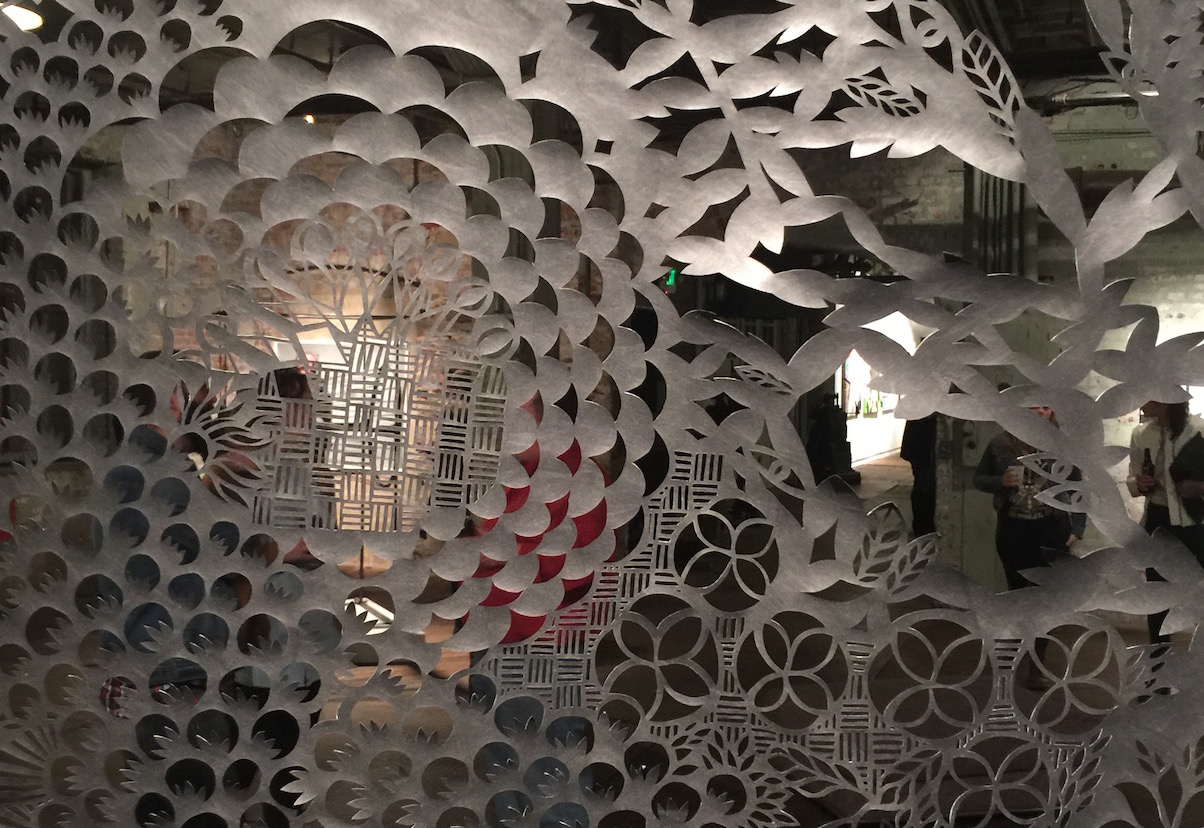 It is this concept—the coalescence of togetherness and solitude—that defined Proximity, the current exhibition at Area 405.

Page’s works, through their theatrics and dynamism, assumed a central role in the early stages of the opening. The deceivingly innocuous pieces were comprised of large-scale bellows, attached to humanoid fabrications through a network of flexible tubing. Two participants—one atop a modified stationary bike and the other kneeling—pumped the bellows, providing air to the anthropomorphic forms. The action of pumping, initially perceived as a frivolous act of inflation/deflation, became vital once it was revealed that two individuals were hidden within the fabric encasings.

The peaceful connotations of the fabric forms—one echoing a cross-legged, meditative stance, the other alluding to eternal sleep through a sarcophagal arrangement—were subverted through the tortuous, contrived realities of participants who, while willing, lacked the tools to flee their silent, powerless states.

Proximity, the curatorial project of Sarah Tanguy and Stewart Watson, displays the works of seventeen artists who operate within Area 405’s Oliver Street Studios. The themes embedded within Page’s work, namely the juxtaposition of the bound subject’s solitude with the audience’s collective act of passive viewing, play out at a larger scale within the expansive setting of Area 405. Within these cavernous, post-industrial galleries, art exists in seclusion, fettered by invisible boundaries that prompt separate viewing and largely impede veritable interaction.

The expansive warehouse in which Area 405 stages exhibitions presents a dynamic area for staging, viewing, and socializing. White wall sections suggest a traditional approach to the display of contemporary art, yet the building’s unpolished features—rusted structural beams, exposed piping, chipped beadboard, and brick—remain intact, engendering an atmosphere that calls for a more candid integration of art and space. Unbound by spatial constraints, Tanguy and Watson crafted intimated moments of withdrawal and spectatorship, yet neglected to utilize the space to encourage purposeful dialogue between works and between artists. Proximity operates as a social studio-visit, in which attendants navigate through un-walled yet distinctly separate workspaces, each rich in visual material yet lacking authoritative claims to space and purpose. Here, there are palpable disconnects—between art and space, art and art—in which interaction is negated and limited.

James Vose’s metal clamp, a contraption that speaks to the warehouse’s vestigial history of technical production, is relegated to a white-walled corner. Other projects, such as the photographs of Liz Donadio, are displayed in a seclusive manner, where crowded, single-artist vignettes engender passive associations with adjacent works. The works of Zoë Friedman, encountered upon entry, stood as a unique exception, making a coherent assertion to their prime placement. Blocking the viewer’s ability to navigate the warehouse, Friedman’s works challenge the vastness of the initial gallery through the manipulation of light and direction. Evoking shoji screens, half a dozen black tyvek panels are arranged in a subtle arc in space, suspended like curtains.

Casting shadows upon the hardwood floors, the two-dimensional panels engage with three-dimensional space, at once extensions of the structure’s walls and ethereal carpets, whose elaborate, Turkish-like designs can be seen only in the right light. Freidman’s works toy with the viewer’s sense of space and agency. Hand-cut vegetal motifs—intricate petals and simple geometries that form larger compositions—permit the viewer to gaze through these screens, yet the body is ultimately denied this access to the work’s semi-permeability. Free to gaze through and circle a fractured gateway yet rejected entry. Proximity possesses many captivating works, among them Vose’s clamp, the sketches of Jackie Milad, and the adjacent and chromatically congruent works of Kyle Tata and Antonia McAfee. However, the show was stunted by its segregationist display, pushing artworks to compete with one another for attention and restricting moments of cross-pollination and dialogue. And yet, this divide—of artist and of style—is only so limiting, for the show successfully presents a varied, commanding catalogue of Baltimore’s homegrown arts infrastructure and output. Exploring the show’s many vignettes and displays, one is confronted with the diversity of materials, themes, interactions, and practices.

An indicator embedded within its name, Proximity may profess an intentioned separation of artists, seeking to demonstrate acts of production that, despite their temporal and spatial closeness, exhibit distinct divergences. Eschewing obvious associations in form and practice, Tanguy and Watson have, as I am realizing now, crafted an exhibition that challenges notions of aesthetic relationships, demonstrating instead a more elusive concept: that environment elicits a multiplicity of practices, practices that cannot always been readily compared or juxtaposed.