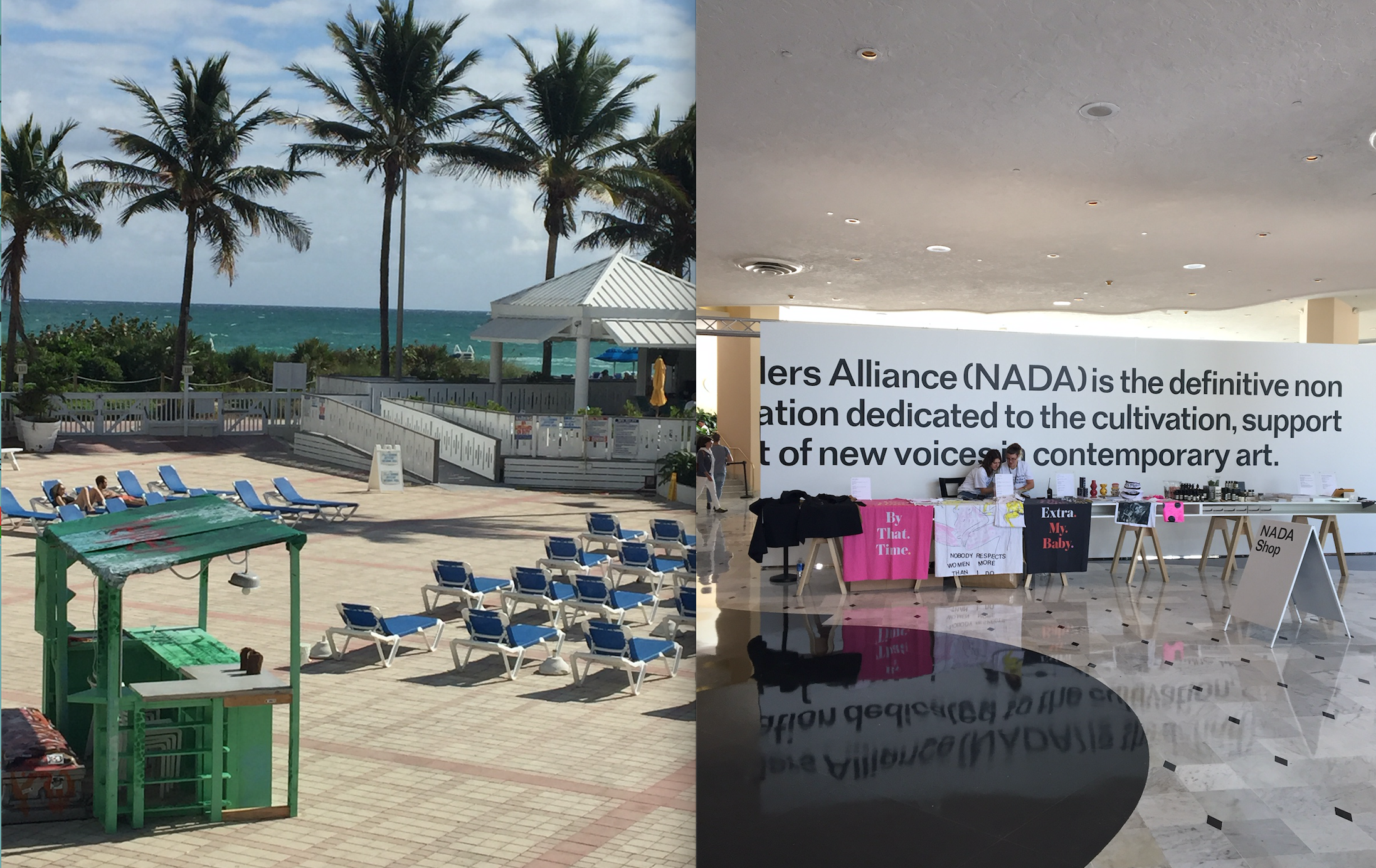 NADA: the Intellectual Fair on the Beach

One curator I talked to at Satellite Art Show, a brand-new fair at the Parisian Hotel, called one of her artists “hyper-emerging, because he has never sold anything before.” This seems to be an apt metaphor for Satellite, which is an upscale offshoot of last year’s Artist-Run Fair. Many of the galleries, collectives, and artists presented were in their 20’s, though not all, and a young, casual, noncommercial attitude made the fair a comfortable place for artists to come together.

I went to Satellite alone, expecting to be in and out quickly, but I ended up spending about twice as long as I intended! This was probably because everyone at this fair was so friendly, ready to talk with you about the work, and ask you about yourself. There was also a good chunk of Baltimore artists and galleries here this year and it seemed worth it to stay and push off some other fairs to the next day. Satellite reminded me of other smaller artist-run fairs I’ve been to and a part of. It’s the kid sister in spirit to NYC’s Spring Break, an Armory satellite show. Artist-run always means a DIY approach and this is both great and kind of terrible to evaluate, as a journalist and viewer instead of as an artist. Wall labels were generally absent, price lists are often disorganized stacks, and lighting solutions are ad hoc. The crowd is young and the party starts every night at 7 in the lobby and on the street in front of the hotel.

An artist-run approach sometimes reveals why galleries and curators are needed. Often, some distance between the artist and the work is helpful. Artists can be too sensitive – a few folks followed me into the hallway if they thought I hadn’t spent enough time in their rooms or they thought of one last thing to tell me. A few felt it necessary to tell me what other reporters had already reported. As a general rule, I don’t read other reports until after I’ve written my piece because I want to form my own opinion. I enjoyed the well thought out installations of hometown favorites Terrault and Platform, who clearly considered how to elevate the hotel space they were given in clever ways that I believe would have set them apart to me, even had I not already known them. Also strong installation work from Doppelgänger, Grin, and Tiger Strikes Asteroid.

The work at Satellite is a little bit of everything– photography, textile, painting, sculpture, but the true star is installation. Some galleries or collectives showcased the work and others chose to showcase the hotel room. For this reason, I have mentally dubbed the show the “cave show” because so many rooms had very limited lighting and made it hard to see the work.

A number of the rooms were filled with artist collectives, rather than galleries, and artists who were sharing a room with other artists, attesting to the affordability of the fair. I had my press badge on and I think the artists felt obligated to talk to me. Sometimes this is so great and you learn so much you were curious about. But sometimes, this can be awful when someone interrupts you and tells you what the work means or that the pieces on the wall are their “babies.” How am I supposed to objectively evaluate someones baby??

Overall, the artists at Satellite were super friendly and I did end up listening to a few life stories about their work, and in some cases this made me feel terrible if I was planning to put their work on my ’10 worst’ list. Our discussions made me empathize with the artists and like them, but it didn’t change my mind about certain works that I found to be less compelling than others.

On the whole, I enjoyed Satellite far more than I expected to and plan to return in the future.

Platform Gallery, Baltimore, MD with works by Alex Ebstein, Esther Ruiz, and Amanda Martinez. This was a very cohesive show. My favorite was the floor, which was a collaboration between the three artists in the show. Floor panels were laser-etched and installed on the floor, with a concept and design that was strong. Terrault Gallery, Baltimore, MD. Works by Katie Duffy, including bathroom installation. Terrault also included Lesser Gonzalez-Alvarez, Christopher McCarthy, and Cheyenne Woodward. This room was professionally curated and well lit. Both Platform and Terrault hung fluorescent lights to augment the weak lighting in the hotel room and this made work look so much better. In some other rooms, lighting was a real limitation. I think if you run gallery one of your jobs is to make the art look as good as possible and Terrault definitely made a strong effort to do this. Carrier Pigeon showing at EU Estonia Prints – This was great. Their covers commissions by artists are so clever!

“The End of Ghost” by a Dream Collective, video and cut-outs Flavia Souza “All but Different” at Berlin Collective Nitin Mukul “Confluence” and “Eddy and Swirl” Oil and Acrylic on Canvas, Berlin Collective. My problem with these was partly the dim lighting and also the intense wallpaper that just seemed combative towards the work. “The Post-Grotto” Mixed Media Sculpture at Zhamkochyan Studios, Fresno, CA. These pieces made of recycled shells and ocean ephemera were just too decorative for me. Bigtown Gallery’s room was filled with decorated shoes by Rick Scogsberg. These just weren’t my thing. And, it also smelled very intensely of leather. This was a site-specific response to the hotel room by Joel Garden with Beautiful Culture Gallery. He is also a musician and this aural quality was intended to be part of the painting. It felt unfinished to me. “Cacoon” by Aimee Hertog, mixed media, which was a doll wrapped in fabric. Part of Art Shape Mammoth Residency’s room. Christopher Burning “Take It Like a Man” made of plastic pill bottles, beads, plaster, hypodermic needles, wire, hooks, and hardware. This pieced used medical supplies but failed to transform them into something new. This installation by Castor Gallery, NY seemed to be about being in a hotel room – addressing the cliché of sleeping and having sex in a hotel room. This was too meta for me. Also there was no artist’s name, no labels or price list, and I could not get the gallery’s website to load on my phone. Maybe this was a part of the concept of the piece?

There were strong work at Satellite 2016 sprinkled throughout, but the show was pretty uneven, which makes sense given its youthful and experimental nature.

I saw a lot of digital and video work, showed on iPhone and iPads. There was a lot of abstract, color field work, with Esther Ruiz and Alex Ebstein at Platform presenting a solid example of this type of work.

My overall feelings on Satellite are mixed. It’s great to have a DIY, artist-run, sometimes gritty fair in Miami, as a contrast to the over-glitzy obnoxious VIP-ness of others. I think this fair is a great opportunity for young artists and galleries and it will elevate over time. It’s a place to buy affordable works of art and is heavily entrenched in NY and the East Coast, which is typical for Miami fairs. Every night we passed by The Parisian, there was a huge party in front or in the lobby. This scene is a part of what Miami is, and most hanging out were in their 20’s.

I liked this fair better than I thought I might. Having so many people talk to me was heartening, seeing so many people working hard is encouraging, and these people are the future of the art world. Again, this made it really hard to pick 10 pieces that I didn’t like.