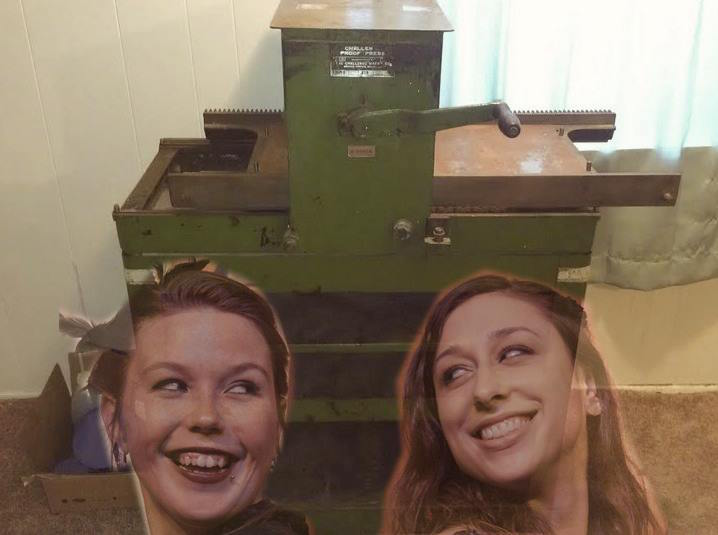 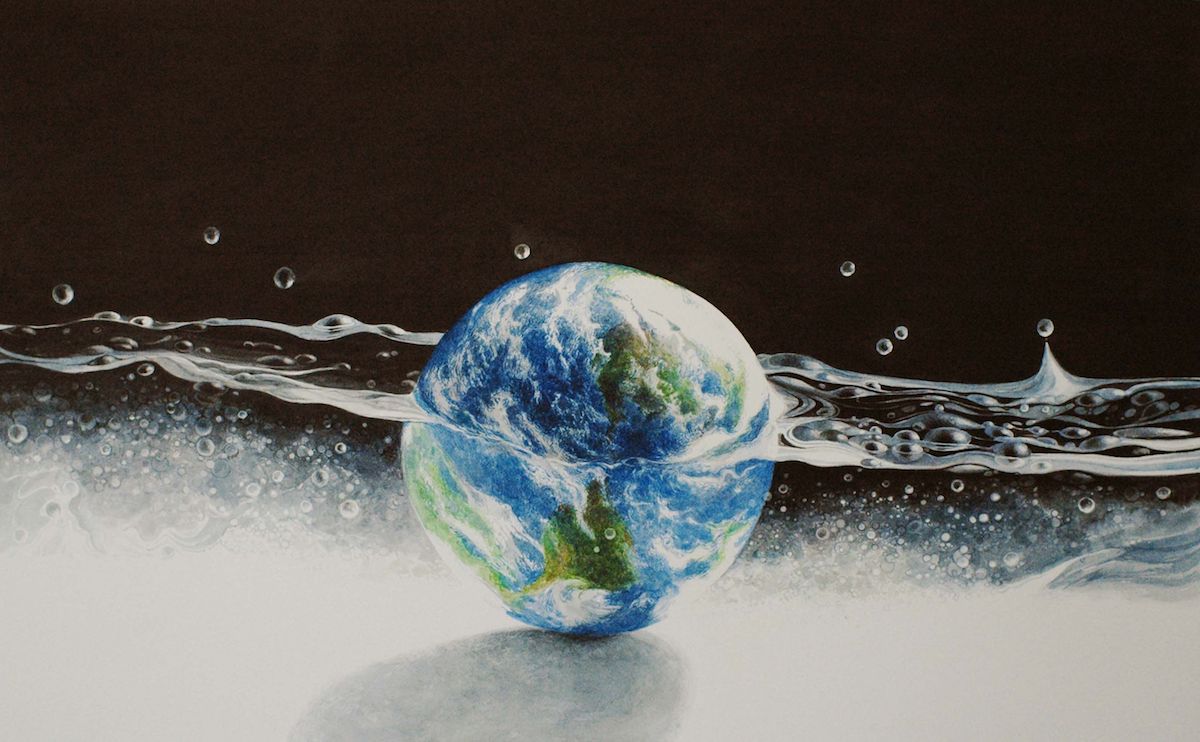 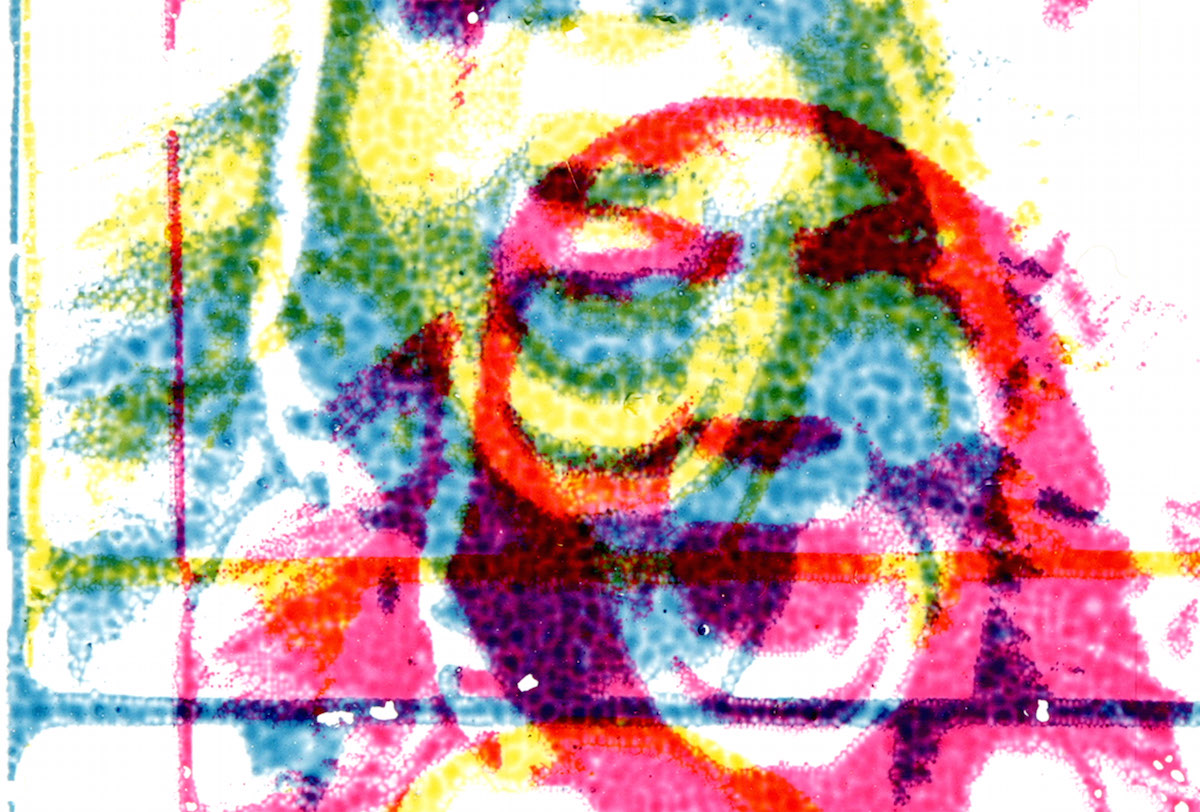 A Review of Decolonizing Alaska, a Group Exhibition at George Washington University’s Corcoran School of the Arts and Design by Brendan L. Smith

Alaska Natives have struggled for centuries against the onslaught of colonization that seized their ancestral homeland to plunder its wealth of natural resources while seeking to stamp out indigenous traditions.

Featuring thirty native and non-native Alaskan artists, Decolonizing Alaska is a new exhibition that confronts this tragic history and effects on the cultural landscape of Alaska, where indigenous people often must rediscover their own identities in a modern world after systematic efforts by Russian and American interlopers to impose their own government, religion, and values.

The exhibition at George Washington University’s Corcoran School of the Arts and Design challenges Western assumptions that native art should be a quaint time capsule, a non-threatening collection of ceremonial garb and pottery divorced from their original meaning and encased in glass cases. While some of those traditional materials are used with resounding effect in this exhibition, the artists combine them with decidedly modern techniques and materials. 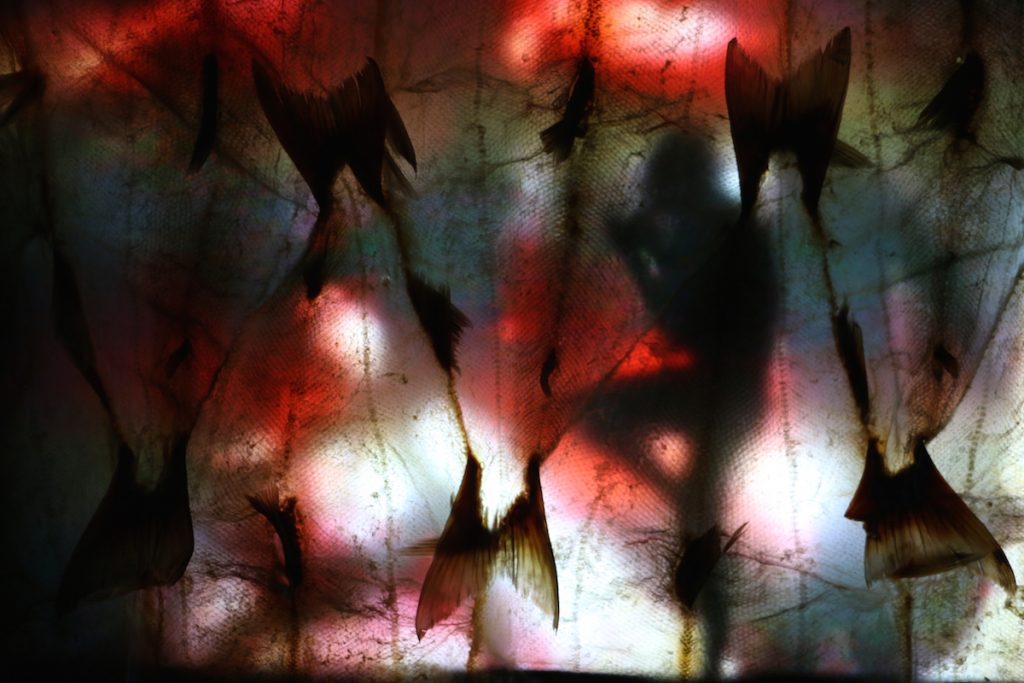 Joel Isaak’s video projection through a screen of sewn salmon skins is one of the most captivating works. Titled Łuqa’ ch’k’ezdelghayi (Visions of Summe)r, the video features Isaak’s shadowy figure dancing in a shifting sea of colors interspersed with recordings of family conversations punctuated by the rhythmic chopping of fish. The translucent screen of salmon skins, complete with fish tails emerging at odd angles, binds the familial fishing traditions of the Dena’ ina people to modern life through a video lens. 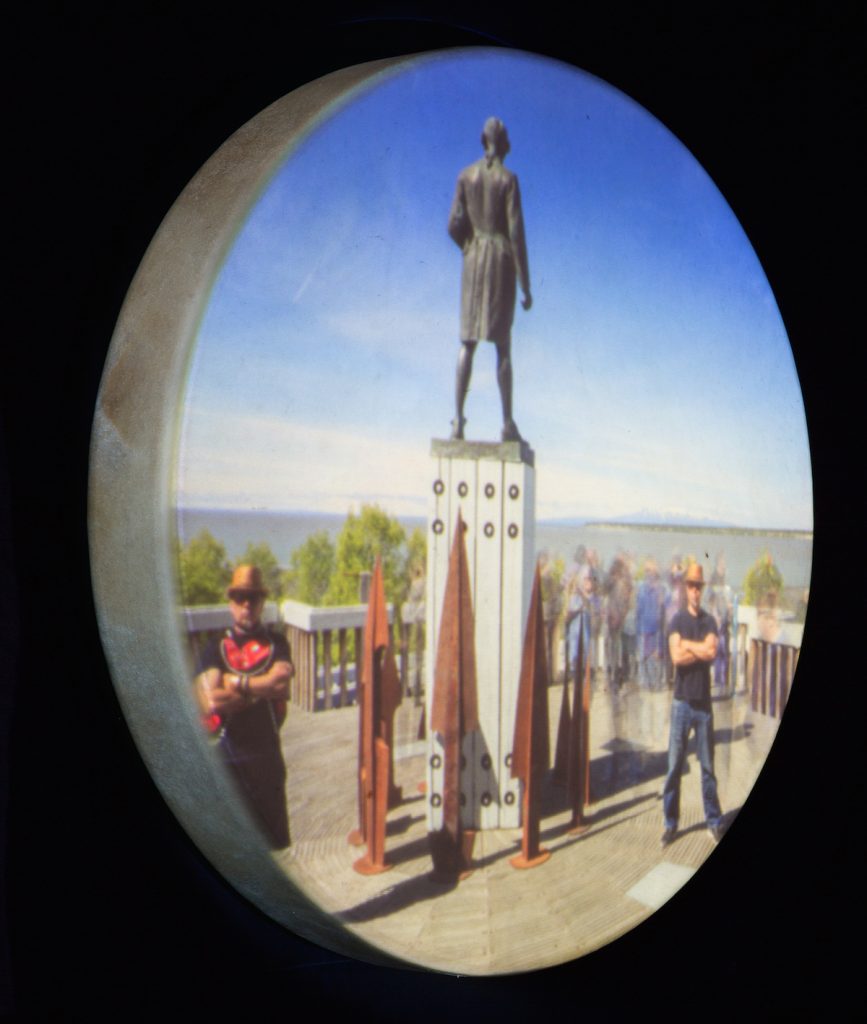 The rocky outcropping on the Kenlai Peninsula where Captain James Cook landed his British ships in 1778 to seize the territory for King George III is aptly named Point Possession. It’s near modern-day Anchorage where a large bronze statue of Cook stares out to sea at Resolution Park, the site of a pop-up installation called DiscovRED by Tlingit/N’ishga artist Da-Ka-Xeen Mehner that is projected through the head of a traditional drum. Mehner surrounded Cook with steel sculptures based on Tlingit warrior knives and then photographed himself interacting with the sculpture and other visitors, challenging the notion that native people didn’t really exist until they were “discovered” by foreign explorers. Westerners speak of Eskimos as if there is just one monolithic tribe in Alaska, but the stereotype is a haphazard collection of the Inuit and Yupik people that many deem to be inaccurate or insulting. 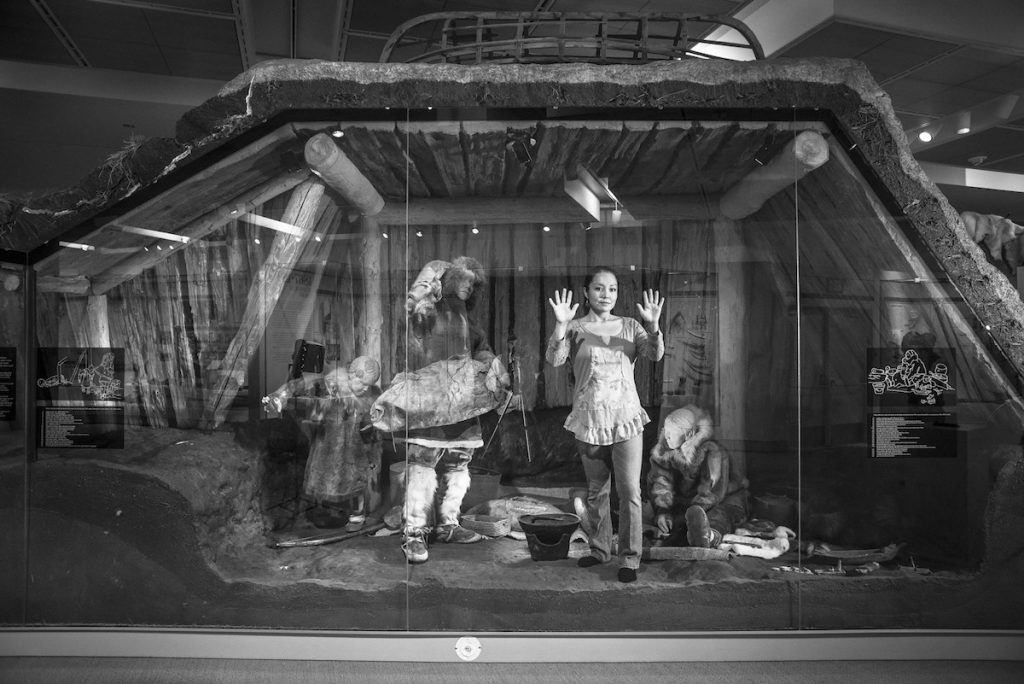 In White Gaze (Yu’pik Ena), white Alaskan photographer Michael Conti depicts an indigenous woman trapped inside a museum display case surrounded by fur-covered mannequins depicting a traditional indigenous family in a wood-hewn hut. She is pressing her hands against the glass, seeking an escape from the preconceptions of Western eyes that pigeonhole her people into the past with no connection to the living. There often is some trepidation by white artists to create work that speaks to the tragic history of colonization, racism, or other profound experiences of people of color out of fear their work will be misinterpreted or dismissed because it lacks the imprint of personal experience.

As a white male artist, I can relate to that dilemma, but all artists should feel free to speak truth to power. Racism and colonization undermine both the oppressed and the oppressor, and there shouldn’t be anyone standing on the sidelines waiting to see how it all plays out. This piece is an invitation to artists of all races to acknowledge the sins of the past, the prevailing abuses of the present, and the unsettling mix of hopes and fears for a more enlightened future.

This exhibition, which will be on view until March 18, was curated by Asia Freeman, executive director of the Bunnell Street Arts Center in Homer, Alaska, which sponsored the exhibition. The traveling exhibition also will be shown at the Alaska State Museum and Alaska Humanities Forum later this year. Each artist provided a brief description of their work in some enlightening wall text that provides valuable context. 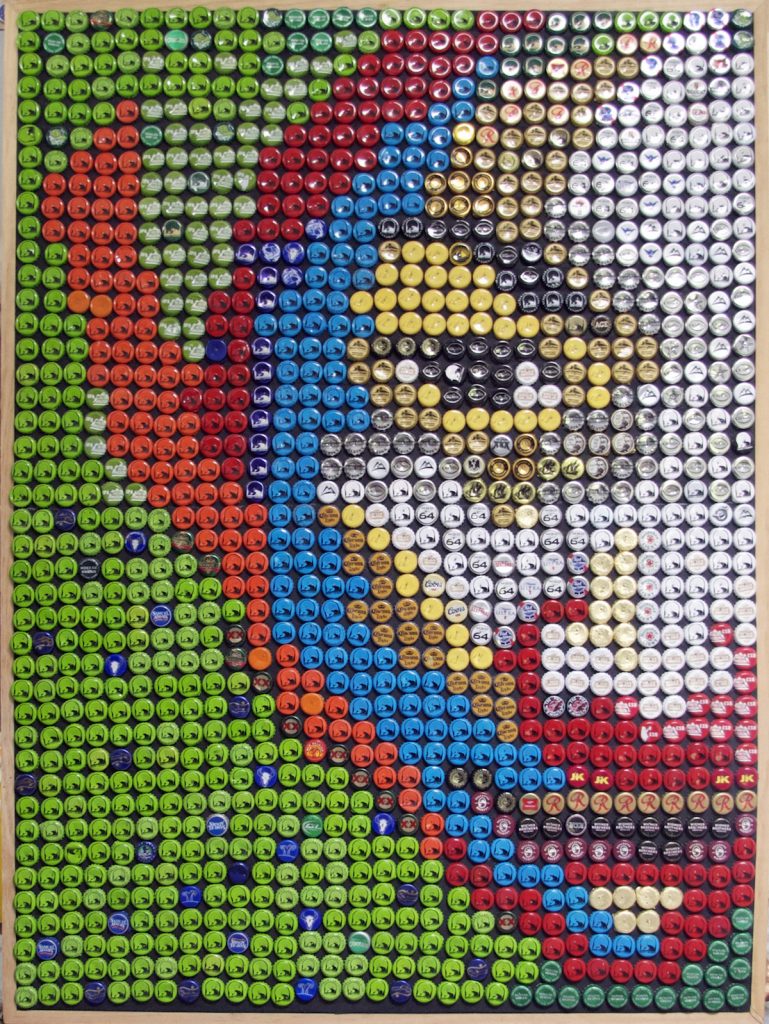 In Drey, Holly Nordlum depicts the heartbreaking story of her adopted brother’s upbringing. Drey was taken from his birth mother and placed in foster care after she was found extremely inebriated in a cab while attempting to breastfeed him. He was bounced among foster homes before being adopted by Nordlum’s mother when he was two years old. Nordlum creates his portrait using a brightly hued array of beer bottle caps in a piece that looks fun and psychedelic on the surface before digging deeper.

In another tragic legacy of colonialism, almost twelve percent of the deaths of American Indian and Alaska Natives are alcohol-related, more than three times the rate for the general population. But studies have found that indigenous people have similar rates of binge drinking as white Americans, but other factors may contribute to alcohol-related deaths, including high rates of diabetes and hepatitis among indigenous people along with a lack of basic health care, clean water and adequate housing. 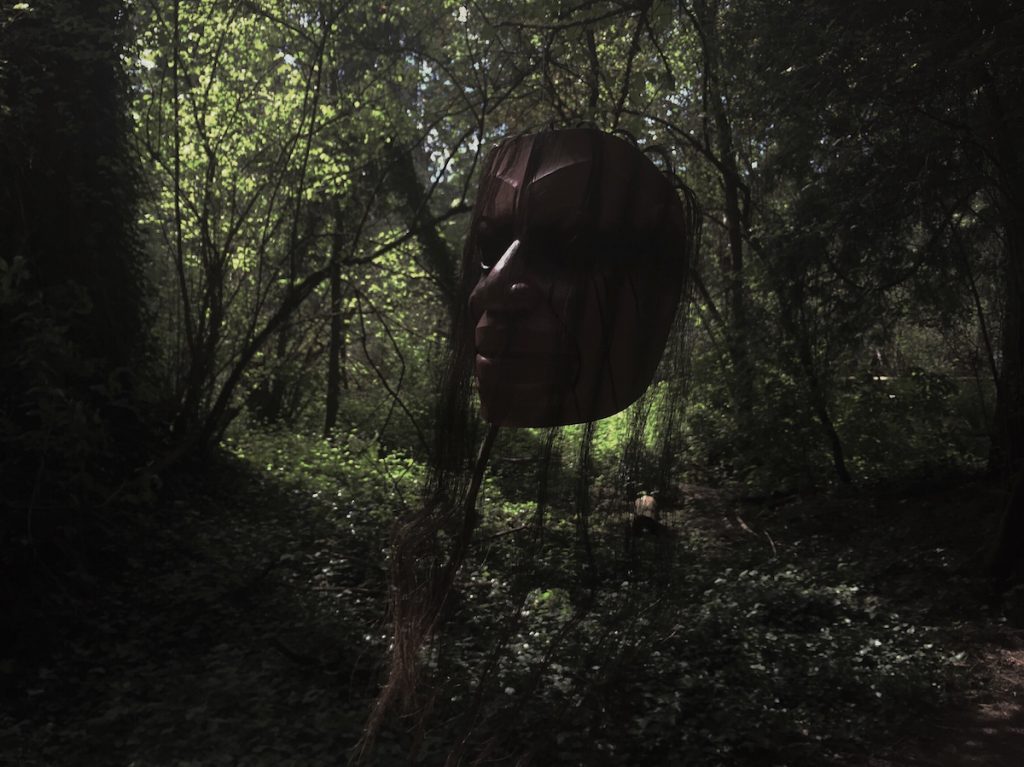 In another video work titled 10 Revolutions, Nicolas Galanin tells the decade-long story of the HomeSkillet Fest music festival in a small island community called Sitka southwest of Juneau. The 13-minute video juxtaposes concert images of energetic musicians with stunning scenes of nature, including water dripping from verdant leaves, a moss-covered tree climbing over a roiling river, and an eagle snatching a salmon from the water in mid-flight. The work celebrates the power of music to bond a tightknit community together and to the land in ways that many city dwellers wouldn’t understand. 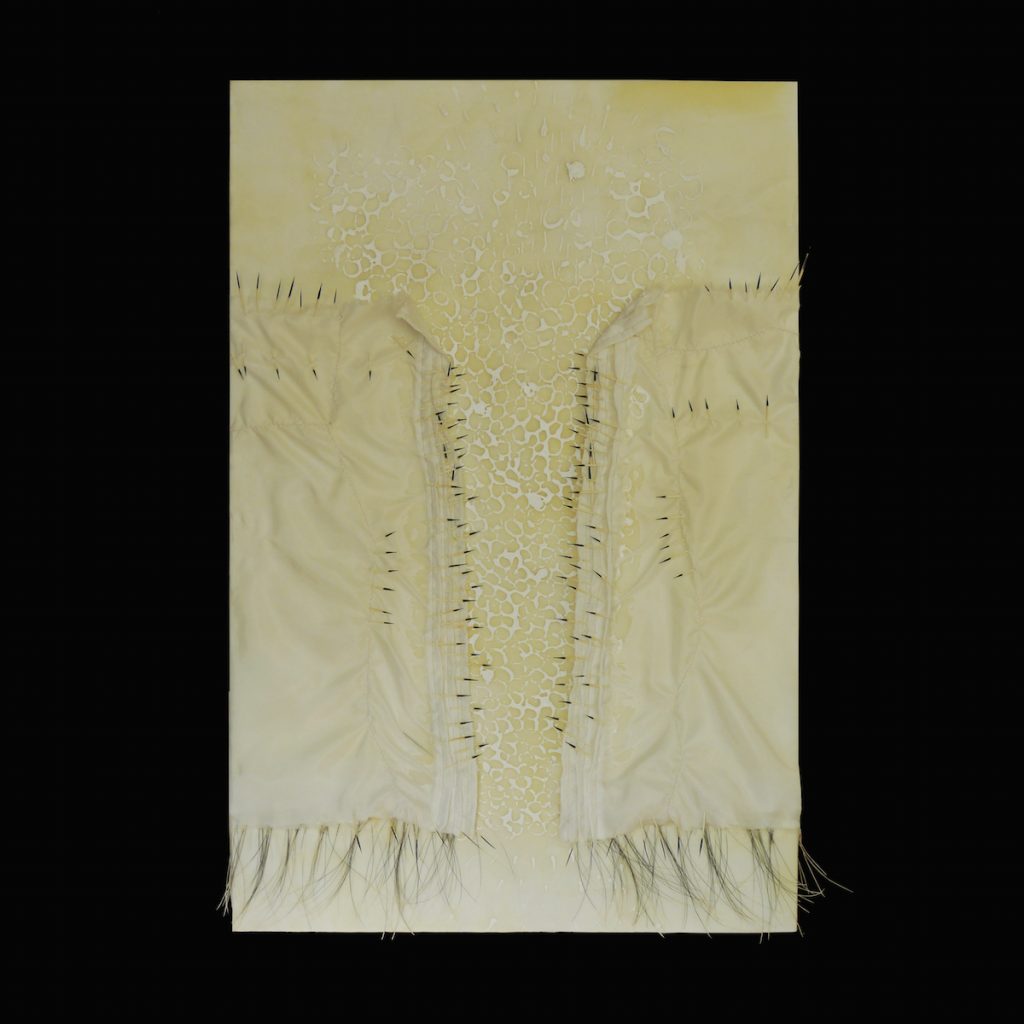 The exhibition also confronts another layer of discrimination that women may face both from colonizers and indigenous communities. In Morning Ritual, Nancy Burnham created a corset lined with ominous pointed porcupine quills, a traditional material used by the Athabaskan women. Burnham, who moved to Alaska from Massachusetts 35 years ago, remembered watching her grandmother lace herself into a corset, trying to squeeze her flesh to conform with the unyielding standards of beauty set by a patriarchal society. 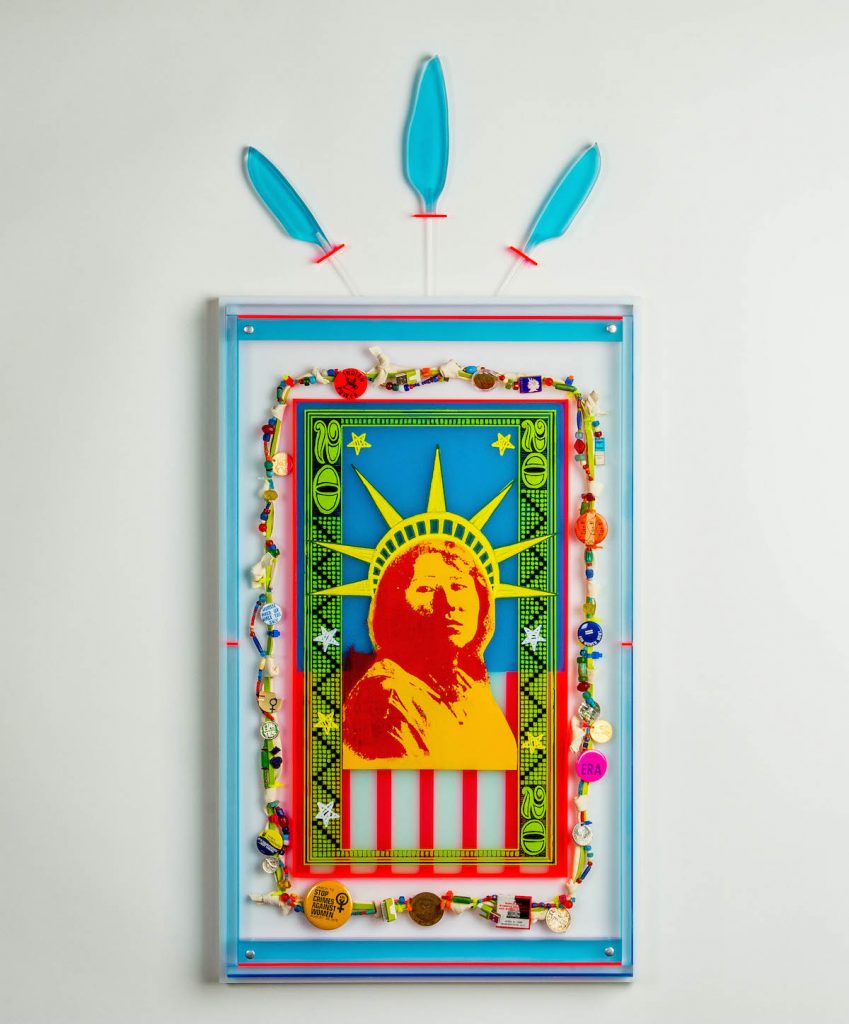 Rebecca Lyon took a modern tack in her mixed-media work titled Counting on Liberty, featuring an image of her Dena’ina Athabascan great-grandmother Anastasia Nutnaltna who is wearing the spiked crown of the Statue of Liberty. Her head is framed on a $20 bill where she has replaced President Andrew Jackson, the notorious slave owner nicknamed the “Indian killer” for his ruthless campaign of war and forcible removal of thousands of indigenous people from their homelands, including the infamous Trail of Tears where 4,000 Cherokee died from starvation, cold, or disease during their forced march westward. But Lyon sees some hope in the recent decision to replace Jackson on the front of the $20 bill with Harriet Tubman, the former slave and Union spy who led slaves to freedom through the Underground Railroad.

The exhibition reveals the struggles of Alaska Natives to reestablish their own cultural identity by acknowledging the benefits of a modern Western society but also respecting tribal customs that have existed far longer than iPhones or Olive Gardens. There’s a constant tug between the daily grind, the demands of the here and now, and respect for an unbroken cultural lineage stretching thousands of years before white bearded men in long wooden ships landed on their shores. That struggle for existence and identity unfolds against the backdrop of a sublimely beautiful natural world now imperiled by the effects of climate change.

Viewers should spend some time contemplating the work in this exhibition, especially now in our Trump-fueled political hellscape where immigrants and outsiders are targeted for persecution and derision, and even the most basic facts are denied and obfuscated behind a smoke screen of lies and fake news. The decolonization of Alaska may be an overly optimistic goal, but there is a fundamental need to foster some sense of reconciliation and empathy not only with Alaska Natives but for all people regardless of race, religion, home country, or any of the arbitrary lines that we choose to divide us. We are all human and our lives are inextricably woven together in a diverse tapestry that must resist the fraying forces of hate and anger. 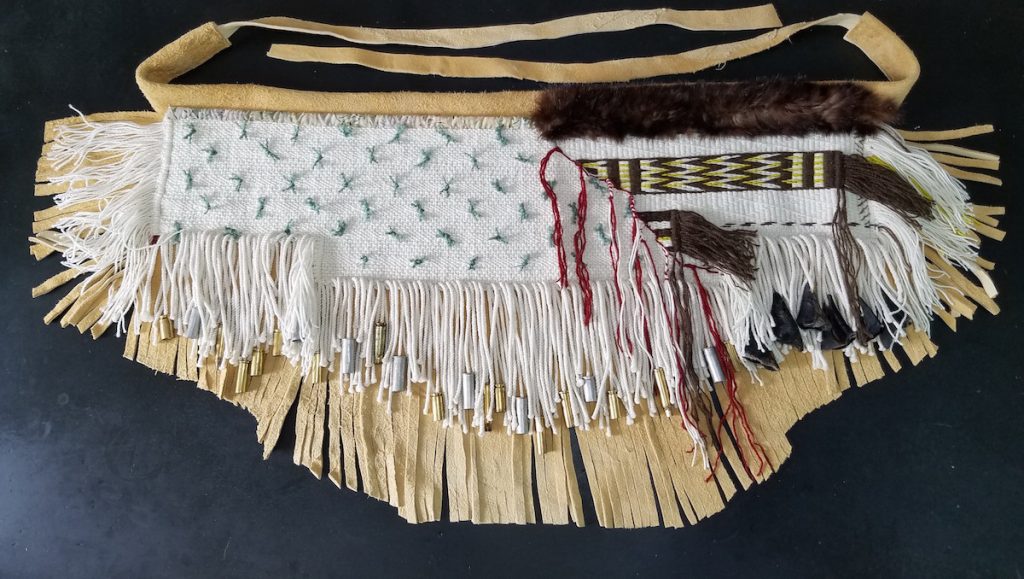 Decolonizing Alaska will be on exhibit at George Washington University’s Corcoran School of the Arts and Design through March 18.

Mann simultaneously combines Eastern and Western influences, using extremely old mediums such as Sumi-e ink, invented in the first century AD in China, and contemporary ones such as Yupo paper, to create a synthesis that is personal and multi-faceted.