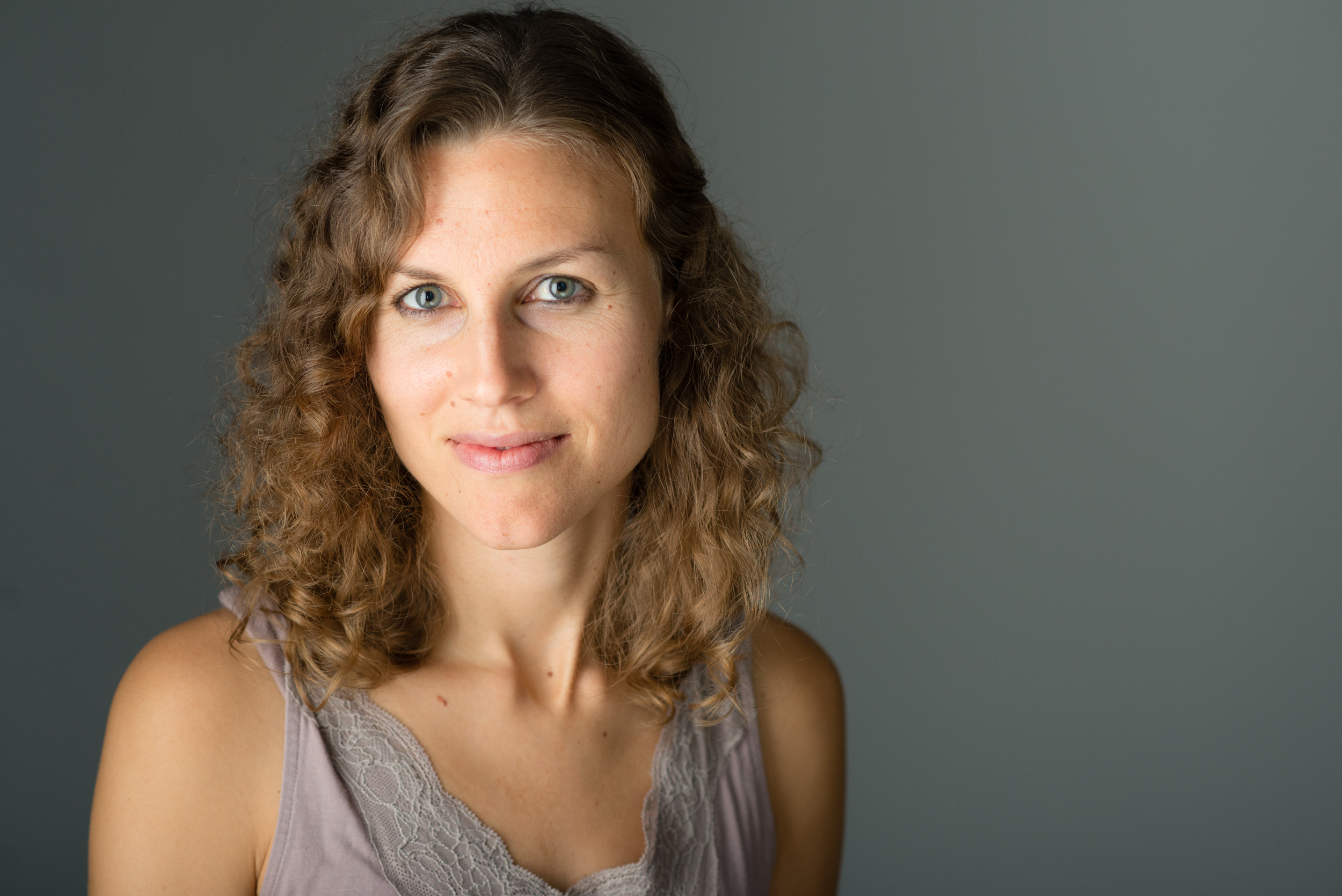 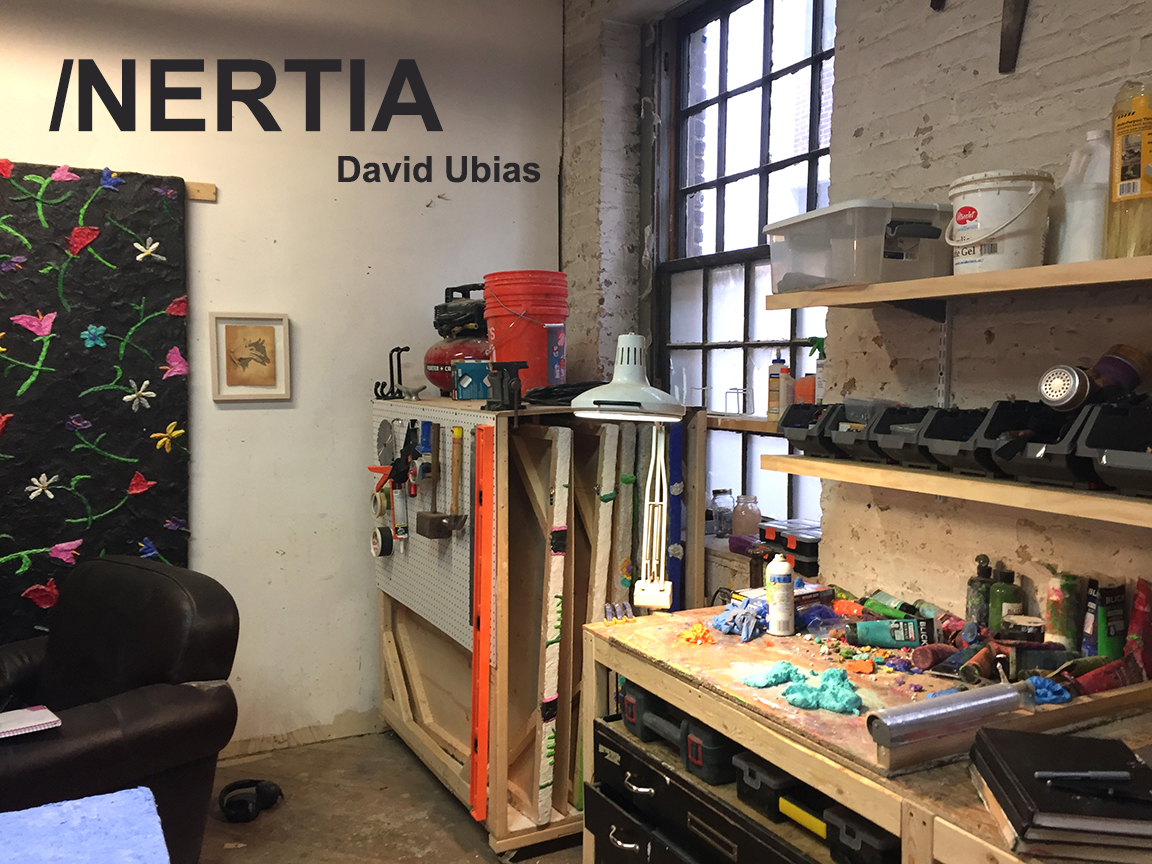 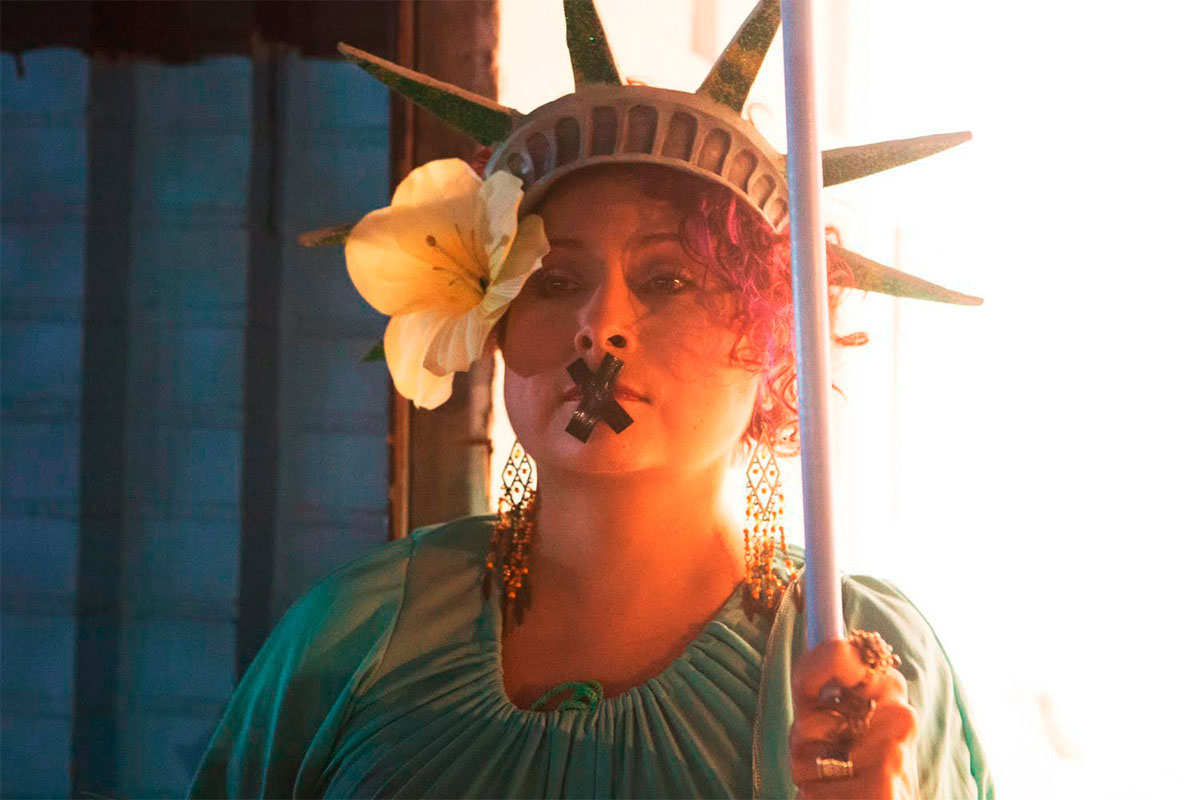 Mike Iacovone writes about US + THEM = U.S.: Finding Ground in a Divided Nation, Curated by Philippa Hughes and Deirdre Darden

Considering the timing of this exhibit, just one week before the inauguration of Donald J. Trump, and considering the title of the show, and the depressing dark cloud that has hovered over Washington DC since November 8th, I expected it to be something very different. I imagined angry artists reacting to the dangerous changes that our country is facing. I imagined protest. What they gave me was a calm and meditative breath that I hadn’t experienced in a long time.

This show isn’t about being angry at all. It’s about coming together. And I was probably too angry to consider that as a possibility until I walked through the exhibit with the two curators, Philippa Hughes and Diedre Darden, who deftly extinguished that flame before I could even finish my “Trump is ruining everything and every day is worse” soliloquy.

BmoreArt: How is the model and mission of this gallery – the Joan Hisaoka Healing Arts Gallery Center for Healing Arts – working in concert with theme of this show?

Philippa Hughes: When we first started discussing the show, I wanted to focus on the gallery’s emphasis on healing and on art’s ability to help people heal. I thought a lot about the way physical healing can be facilitated by emotional healing. It is a powerful lesson I learned from my own breast cancer treatment. I underwent three surgeries and I healed quickly from the physical parts. I attribute that in great part to the emotional support I had, and to art, and that my immersion in a life inspired by art had given me the tools to meet difficult situations head-on. I knew art was a key ingredient in my own physical and emotional healing.

When you decided on the theme, and you knew not only that Trump would be elected, but that he would fill his cabinet positions with Goldman Sachs billionaires, climate change deniers, and Creationists, would your theme have been different?

Deirdra Darden: In the initial weeks of curating, I was under the guise that Hillary would win and Trump was a bad joke. With that feeling, I chose artists that I knew worked in a political realm already and would likely have work around the issues raised during the election. So most artists we contacted were enthusiastic to participate in an exhibition that was going to not necessarily be an olive branch, but instead to create healing after Trump and what we could do next with Hillary as President. Then when the election results came in and Trump won my outlook absolutely changed, however it didn’t change our concept completely.

As a team, Philippa, Spencer, Shanti (Smith Center founder), and myself reconvened almost immediately to make sure the show would reflect this new reality. That the work would be positive but not shy, and present what’s at stake, what people are experiencing, and what we need to examine as a country to move forward. I had no idea who Trump would select for his cabinet but I assumed it would be out-of-touch white politicians that would likely just control him and unfortunately be the real rulers of the “free” world. But this time is different. To know that the artists themselves reflect the multitude of America empowers the exhibit, and it’s inclusivity, for me, is a form of resistance to this administration.

Philippa Hughes: I also knew that our country was badly divided and needed healing. Art could help with that. Art wasn’t going to be the solution. But it was going to be part of the solution. I believe that our country was badly divided even when I thought Hillary would win. And I felt that division would get worse no matter who won. It got worse because of Trump’s victory, or maybe it didn’t get worse, it just got spotlighted.

If Hillary had won, we would have continued to ignore or gloss over the divisions and pretend everything was ok and live in our fantasy bubble. The outcome of the election did not change my thinking on the show. The election reaffirmed the show and I felt the show was even more necessary than ever.

Thinking more about the like-minded people, it seems easy to assume that the artists are also like-minded. The show is about coming together, and about healing. How do you/we/the artists reach out to those who don’t think like us? Is it our jobs to do that? When I think about it, in my own life, I’m not ready. I don’t want to reach out to the other side. I don’t know how to frame this into a question, other than, how do we heal? How does this get fixed?

Philippa Hughes: I don’t know the answer to how do we heal, or how do we fix this. But I know that figuring that out entails asking questions and understanding opposing viewpoints. (The the reason why I have been hosting Trump dinners – inviting Trump voters over for dinner.) I am not saying we have to be pals with Trump supporters. But I am saying that we can’t move forward unless we understand them. An analogy: when I was on the debate team in high school (nerd alert!), we had to be able to argue both sides of the issues. If you can’t argue for the other side, then you can’t win your side.

Deirdre Darden: Being like-minded with someone politically doesn’t mean that you are alike as people; this election proves that. I do not feel a responsibility to educate anyone or make them more informed, but I do want to hold people accountable and know that those I share this world with care about me, my rights and the lives of those I care for. Also I’ve had to hold myself accountable to the same list and address my biases.

I think talking about our differences and acknowledging eachothers value and contributions to our country will help narrow the divide. The artists may feel similar, I know some feel more compelled as activist than others, and it is up to them to define their role but as a curator I want their work to foster change in thought and greater understanding. 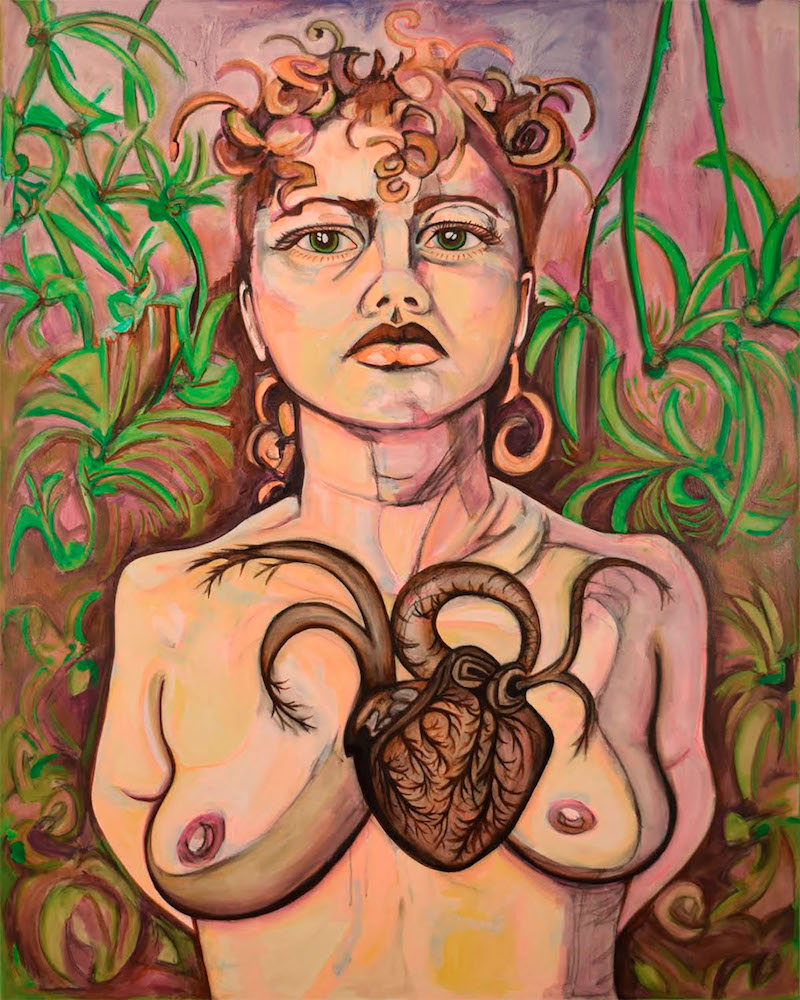 Among the standouts in this show is Lisa Marie Thalhammer’s Tadasana Mountain pose with Chest Stretch and Black Heart. As her portraits often do, this one has an intimate flatness in the setting and the focus centers entirely on the barechested figure with a black heart with arteries branching out like tree limbs. The painting is partially a reaction to the Ferguson conflict and also a time of physical and emotional healing the artist was going through. 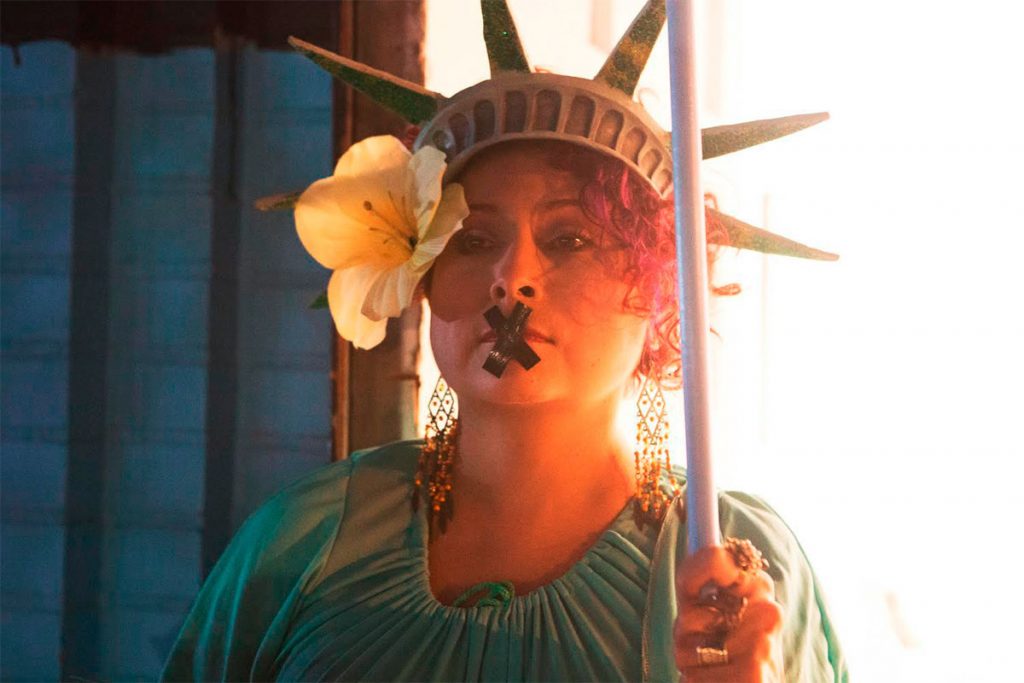 Carolina Mayorga’s video features the artist as a surrogate for the Statue of Liberty, with her mouth taped shut in silent protest. Colombian-born and naturalized citizen Mayorga’s work often comments on immigration and identity. This video offers one of our most sacred and revered idols, The Statue of Liberty, and highlights a missing dialogue which had always served as a reminder of what made this country worth caring about. 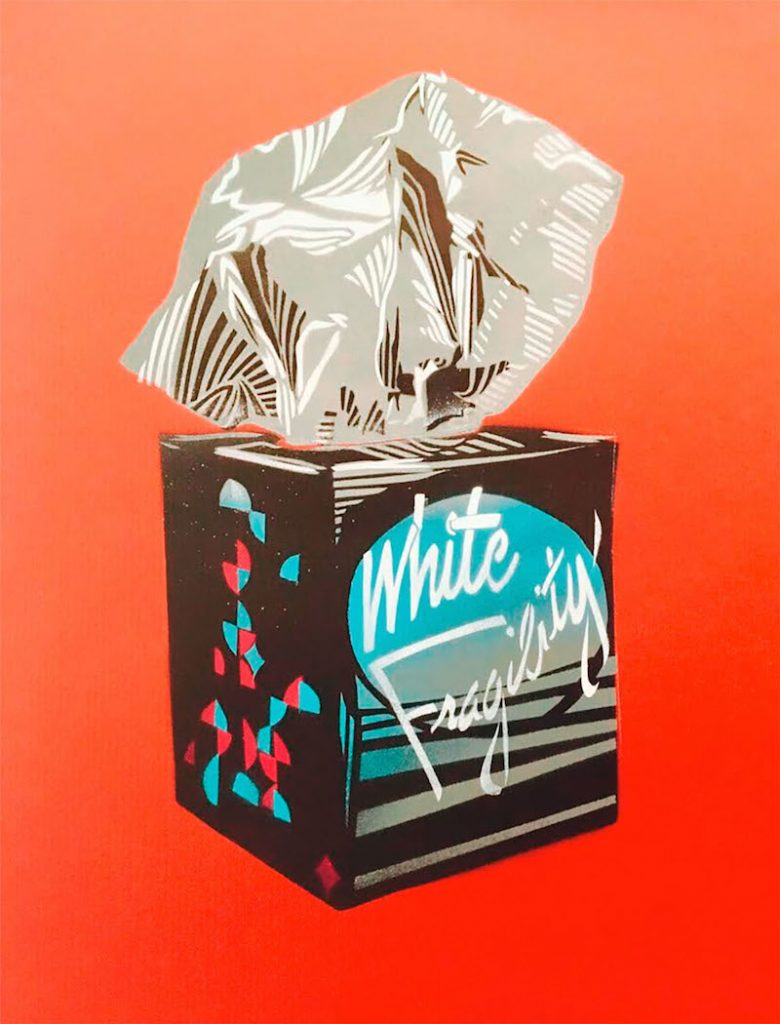 Kate DeCiccio’s White Fragility stencils are an almost light hearted poke at white privilege, but their edges are sharper than they might initially seem. Compositionally they are graphically playful, and graffiti-like.

The wall placement and multiple iterations undermine the possibility of a viewer considering them on the same plane as Fine Art, instead they reference the multitude of protest signs so ubiquitous in Washington DC. White Privilege platitudes adorn the colorful surfaces, while reminding the viewer, with a little discomfort, to reexamine their positions on racism. 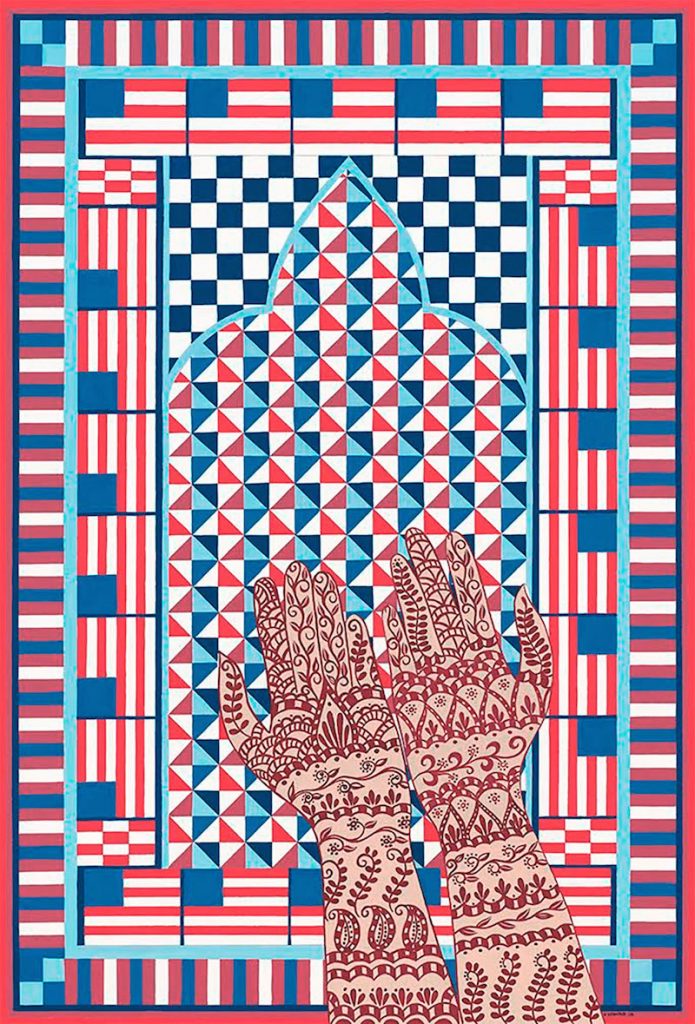 My favorite piece in the show is Helen Zughaib’s Prayer Rug For America. Borrowing from the history of Islamic patterns that adorn mosques, and employing that tradition in concert with the American Flag, and the Mehndi henna hand tattoos, Zughaib straddles the line between Arab and American. The composition is flat and graphic, and the hands interrupt the 2D plane with two palms open as an offer of companionship, or possibly solidarity. 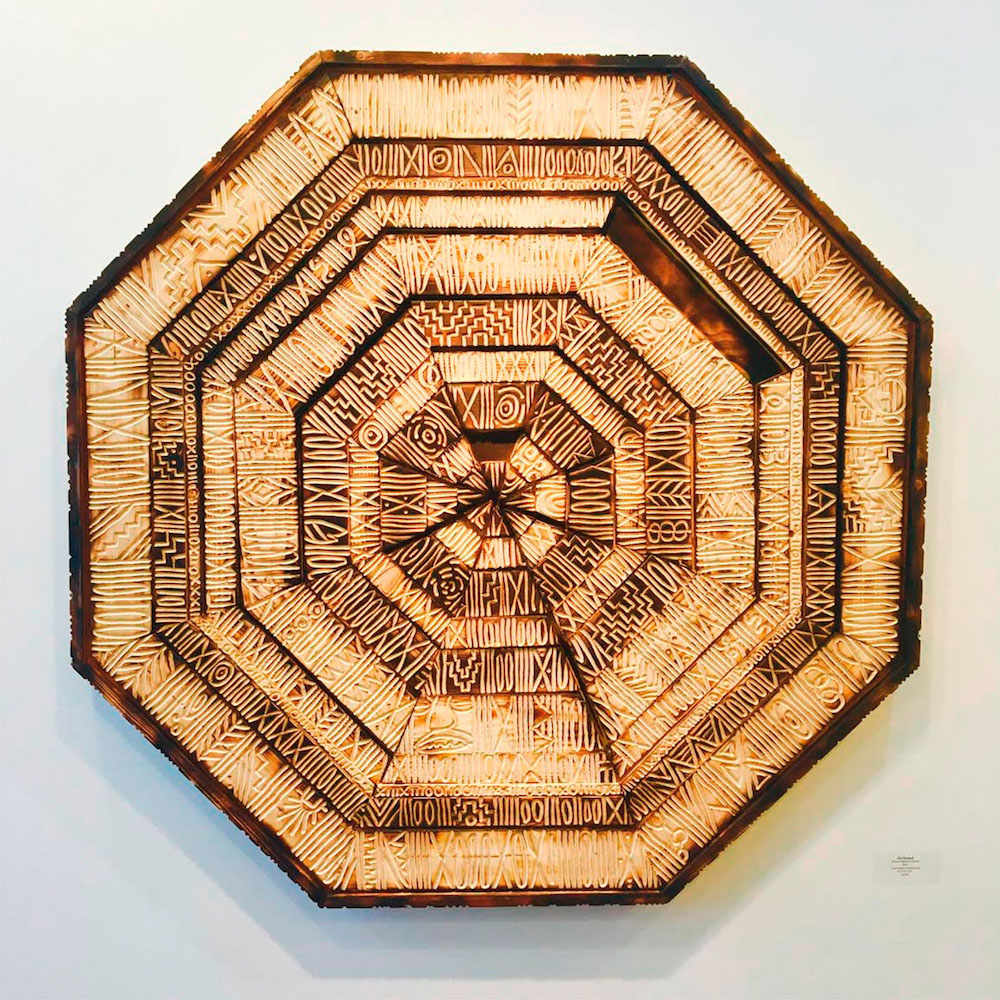 Stan Squirewell’s Dreams Deferred Catcher, an obvious reference to Langston Hughes’ famous poem Dream Deferred, offers a compelling case for healing through the repetition and craftsmanship. Like Hughes’ poem, this piece offers the possibility of considering the joining of his mark making scribed into the wood, or considering the object as a whole as a unified piece consisting of the marks it contains.

It’s certainly possible that coming together at a healing focused art gallery in the political bubble of Washington DC is not unlike preaching to the choir. But as someone who’s been a mix of angry and disappointed since November, it was nice to take in the calm, and appreciate the quality of the work. This show is about the long game and bringing this country back together, and these curators are for more magnanimous and generous than I am. They put together a great show, but I’m still too pissed off and disappointed to heal.

Us + Them = U.S. Finding Common Ground in a Divided Nation is on exhibit at the Joan Hisaoka Healing Arts Gallery at Smith Center (1632 U St NW, Washington, District of Columbia 20009)