Quest for a Third Paradise 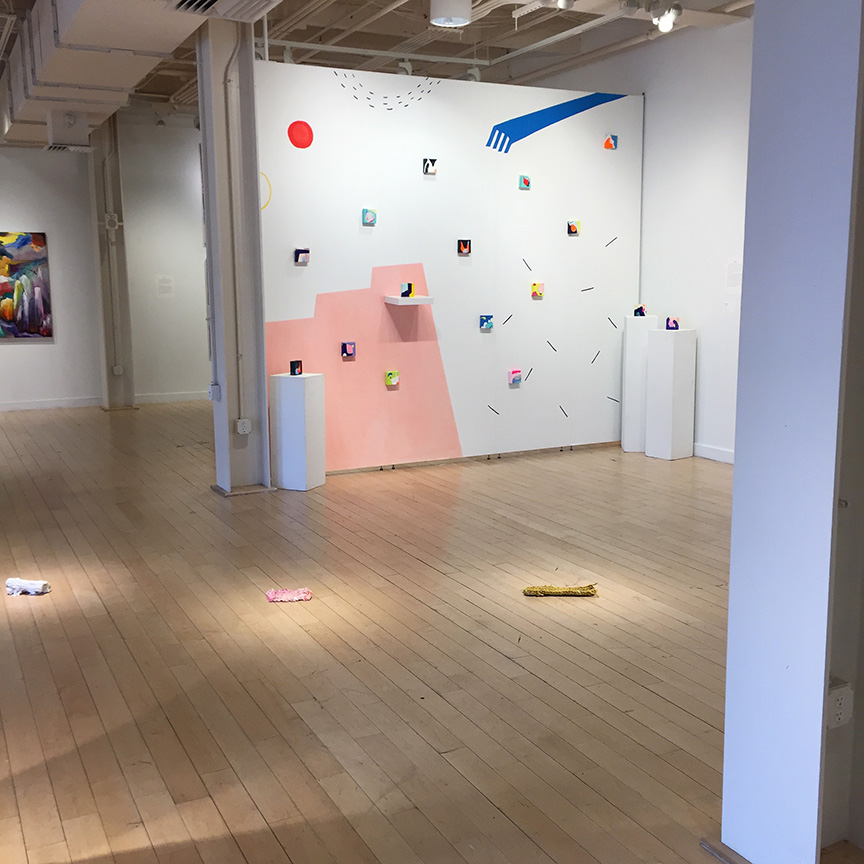 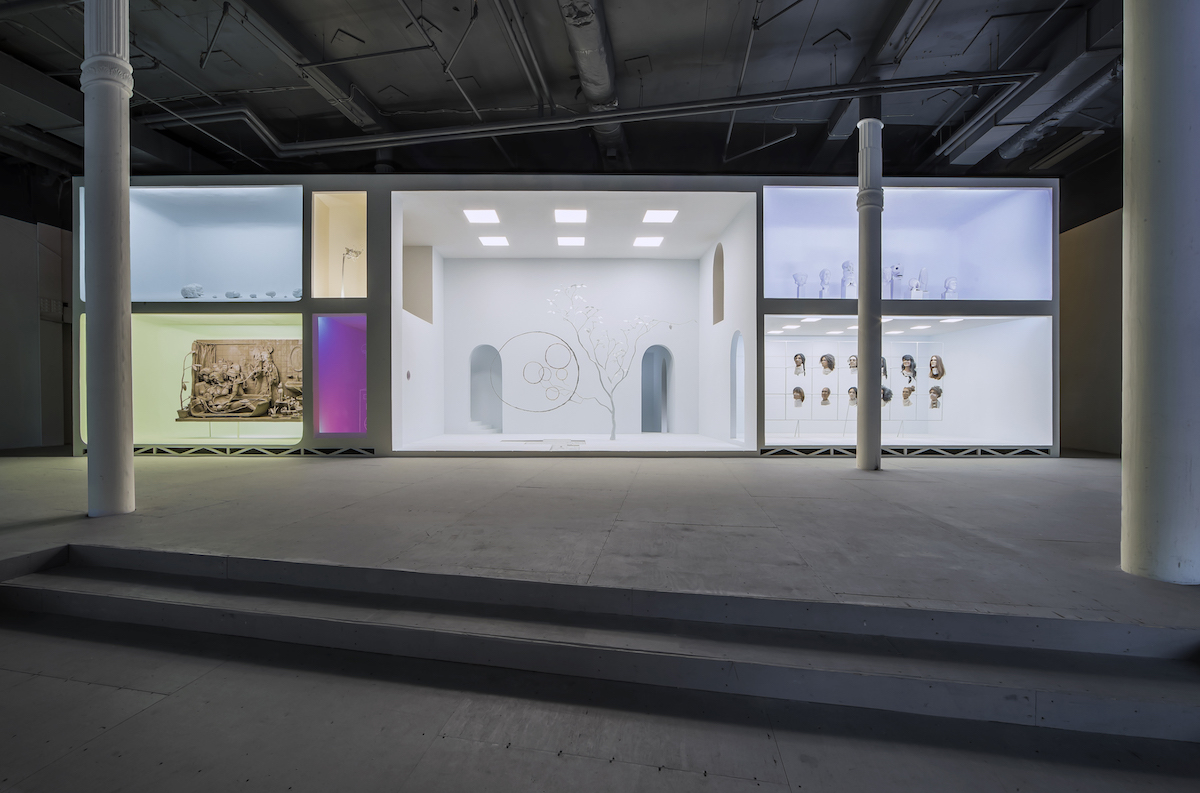 The Museum of Everything and Nothing 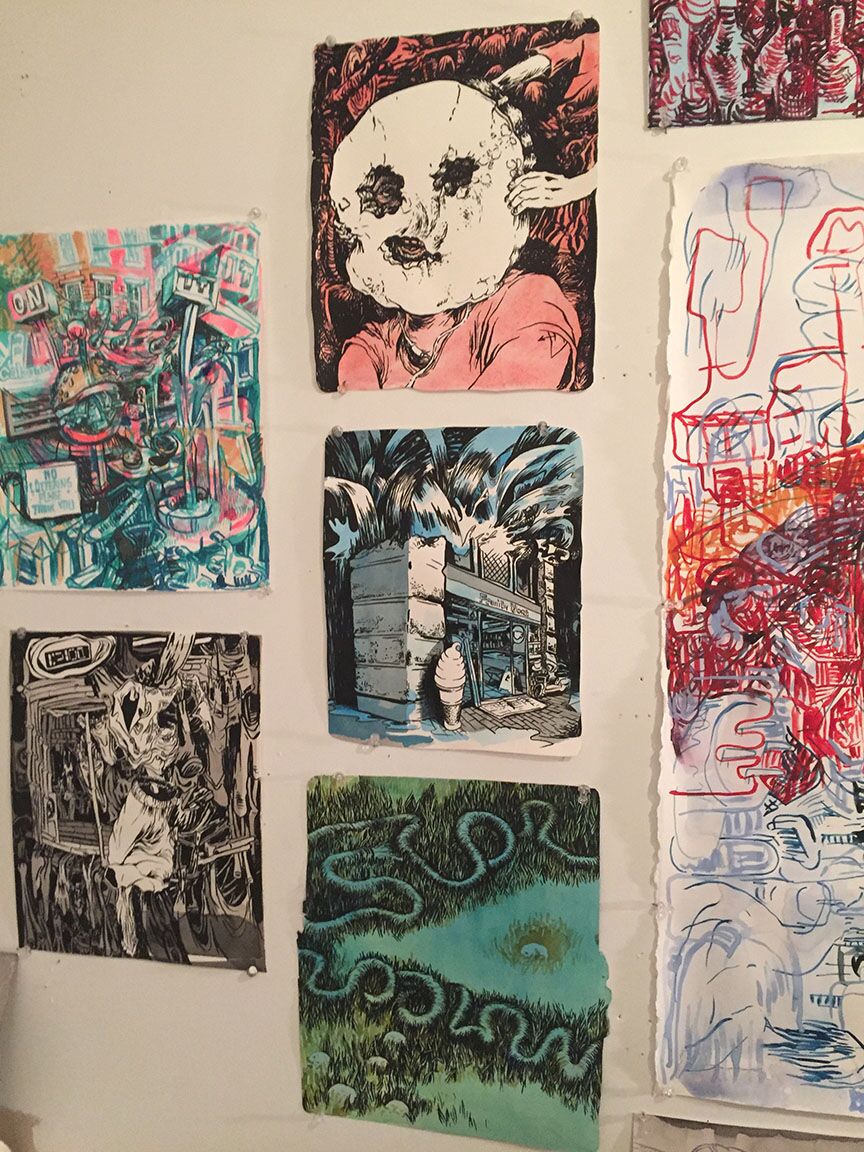 Julie Wolfe is an artist clearly obsessed with color theory. Her latest exhibition, Quest for a Third Paradise at the Katzen Arts Center, is a rainbow of brightly colored paintings, collages, and even a giant color wheel.

Although the title of the exhibition references Michelangelo Pistoletto’s 2003 manifesto—which offered up a middle ground between nature and artifice, the “generative womb of a new humanity”—Wolfe’s works lean largely toward artifice. This isn’t to say that they don’t have natural references, but whereas Pistoletto’s “Third Paradise” works feature recycling and Land Art in a highly political way, Wolfe’s make reference to nature as a means to an aesthetic end.

Wolfe’s most captivating work in the show, “Green Room 2,” is a perfect example. It consists of a wall of shelves, lined with more than 200 glass jars full of water samples from waterways around DC, complete with both natural and manmade debris—dirt, riverweed, bits of plastic. But the water isn’t left its natural color. Instead, Wolfe dyed each jar’s contents with both natural and chemical pigments to create brilliant reds, blues, greens, and yellows.

What at first glance looks like a pointed commentary in the form of a science/art project—a la Mark Dion—turns out to be a manipulation of nature for aesthetic ends. It almost feels like a trick, perhaps because it’s so rare these days for a contemporary artist to put aside identity politics and social issues and focus purely on aesthetics.

Even in writing this review, it’s hard to use words and phrases like “artifice” and “pure aesthetics” without sounding negative. (Lest we forget, the etymology of the word “artifice” is a combination of the Latin words for “art” and “make.”) It makes perfect sense that Wolfe, who is also a successful jeweler—she’s been making rings, pendants, bracelets, and earrings for Barneys NY for 25 years—would be more drawn to create art in the most traditional sense of beauty through craft.

Wolfe the jeweler comes out most explicitly in a sculptural work called “What is Precious,” consisting up a gaggle of magnifying glasses, each one paired with a rock, crystal, or fake precious stone wrapped in tin foil. The message is obvious—almost too obvious. The work does manage to creep a bit closer to Pistoletto’s “Third Paradise” than Green Room 2—it shows the space between nature and artifice—but still lacks the Italian artist’s ultimate goal of a utopian melding of the two opposites.

What is bothersome about Wolfe’s work is not her meticulous use of color in the search for aesthetics but her seemingly superficial references other artists and art movements. While “Green Room 2” reminds us of an aestheticized version of the works of Mark Dion and his tongue-in-cheek recreations of natural history museums, her gouache “In a Day Flight” Series 1-10 paintings are reminiscent of the Joan Miro’s “Constellations” series—except without the imperative overtones of an impending World War. Where Miro used bright colors and organic shapes to represent the horrors of war and displacement, Wolfe’s pink, green, and yellow plankton and amoebas reference surrealism in a way that seems more pseudo-scientific than profound.

Like Miro, Wolfe is obviously influenced by the Color Field movement of the 1940s and ’50s. Several of Wolfe’s paintings—like “Magnitude of Equality” and “River 1″—clearly take inspiration from both the Color Field and Washington Color School movements. But again, Wolfe’s works merely scratch the surface, lacking the scale and visually disorienting effects of the paintings of artists like Mark Rothko and Gene Davis.

“Quest for a Third Paradise” is disorienting, but in more of a scatterbrained than a thoughtful way, at least in part because the artist fails to offer her audience a reasoning behind her work. Pure aesthetics is completely legitimate when the craft and inner philosophy of the works are evident in the final product, but in Wolfe’s case, it all just seems like a visually appealing-yet-confusing hodgepodge of references.

Elena Goukassian is an arts writer/editor based in Washington, DC.

Julie Wolfe: Quest for a Third Paradise is on view at the American University Museum at the Katzen Arts Center through March 12.