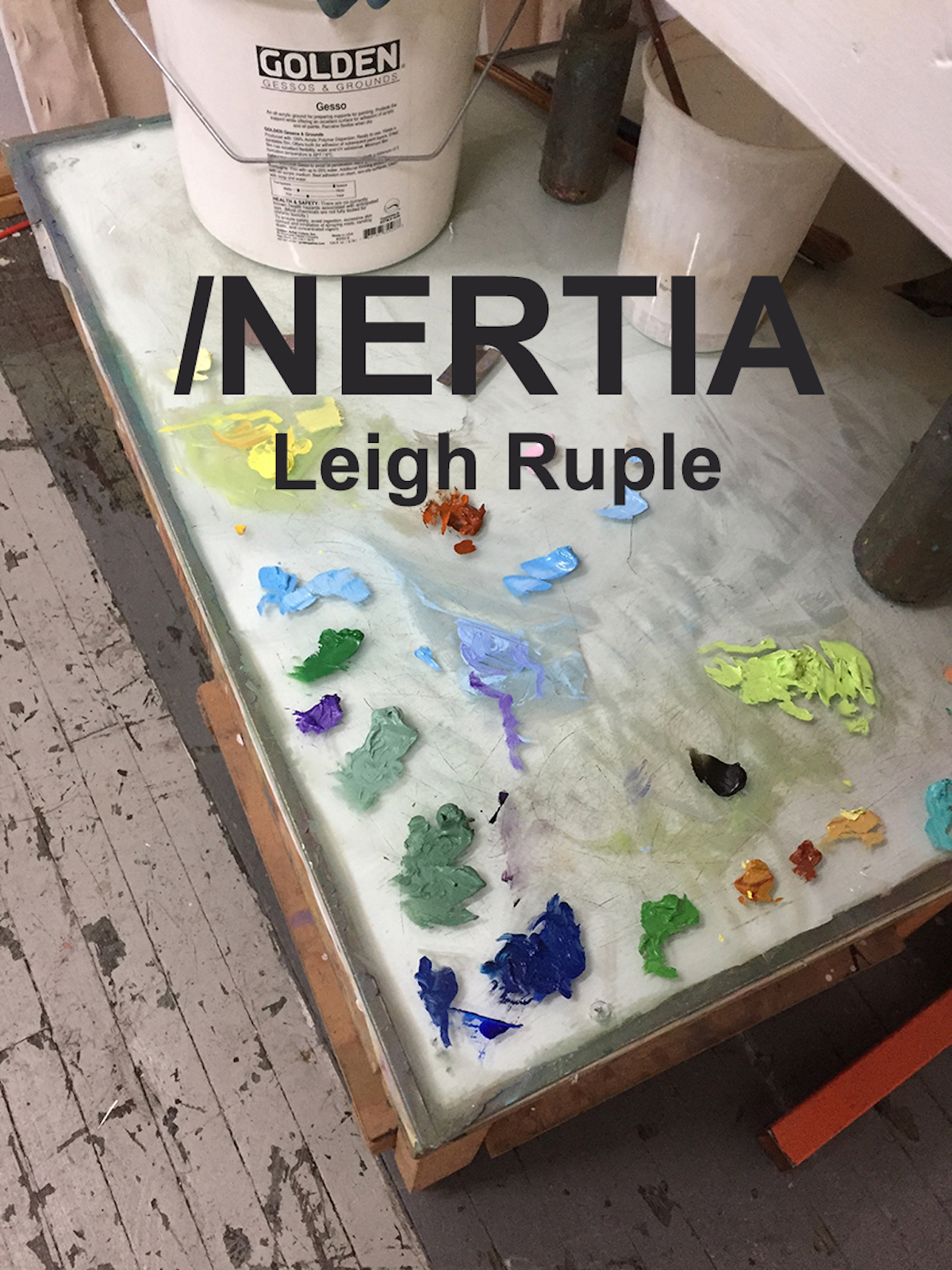 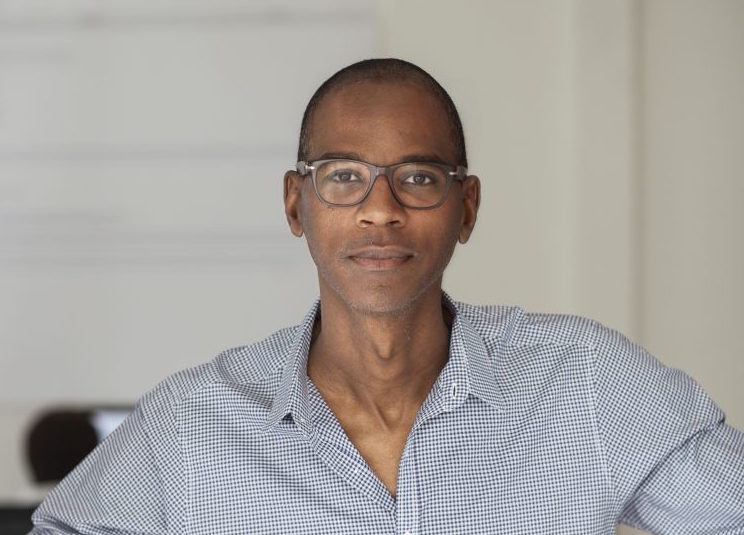 Tomorrow is Another Day: Mark Bradford, Venice, a [...] 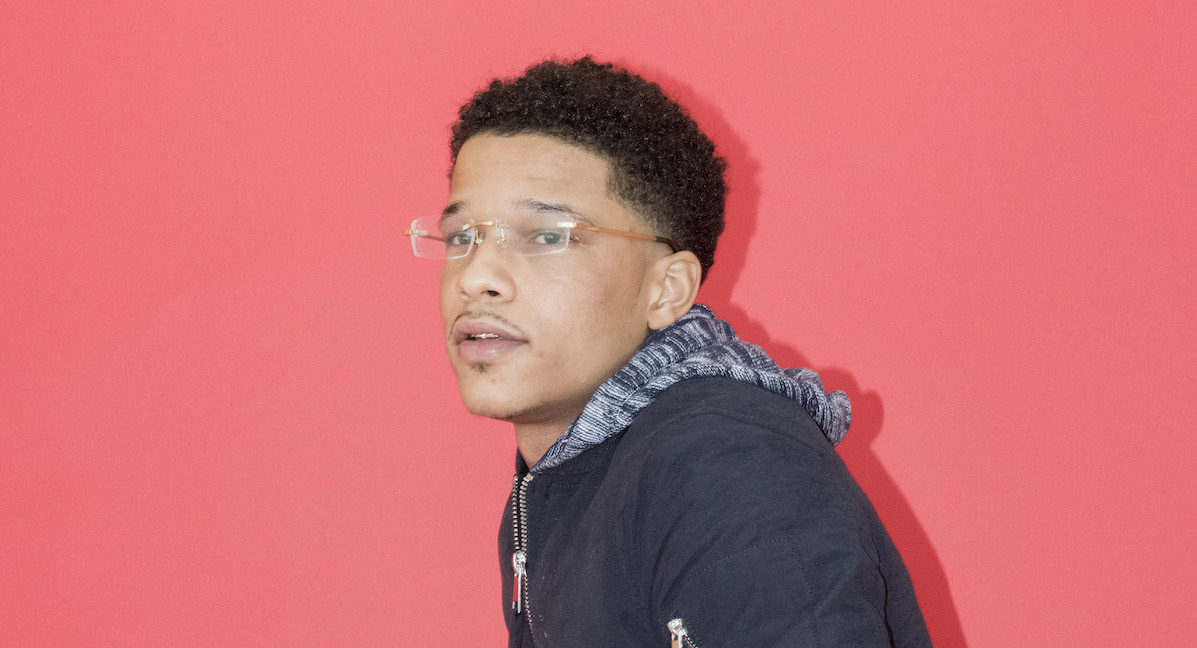 In beautiful, full-color images, True Laurels’ goal was to “create a one-stop destination for those interested in what Baltimore has to offer in context of the global vantage point through feature stories, candid artist diaries, photography and interviews.” 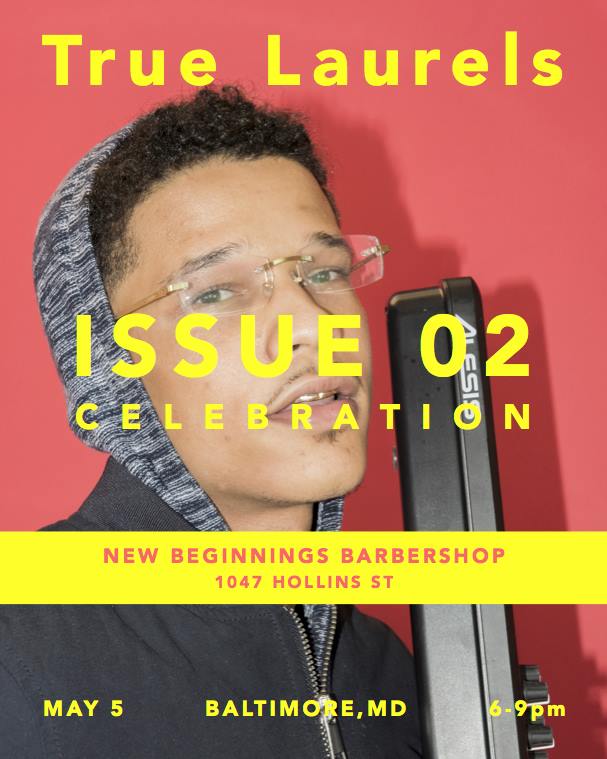 The popular publication is back in Baltimore with Issue 02. This time, the magazine features rising Baltimore-born and based artists like Lor Izzy, Malcolm Peacock, and Corey Washington.

On Friday May 5, 2017, True Laurels will celebrate the release of its second issue. The launch will take place at Sowebo-based barbershop and gallery space, New Beginnings, located just outside of Hollins Market. The event will give attendees the first chance to read and purchase the issue which, like its predecessor, features stories on some of the most captivating musical and visual artists of Baltimore City and beyond. The event will not only give a first look at the issue but also display work from artists featured.

I caught up with Lawrence before his busy weekend began. 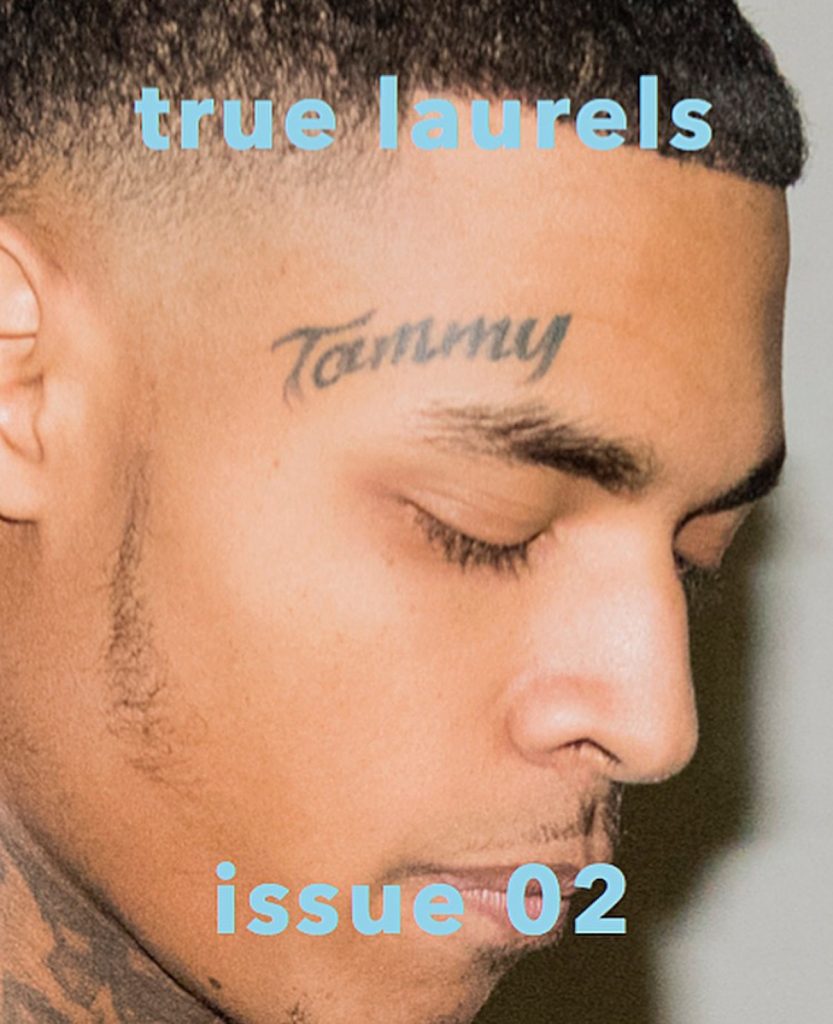 Why did you choose to create True Laurels as a print magazine, as opposed to online, when you launched the first issue?

I had already been making True Laurels as a printed zine back to 2013 but the format was more in line with made-at-home fanzines. Making them that way was fun and a good starting point for me to see how ideas converted from online to physical but I became bored with it. Last year, I realized for me to get True Laurels to its highest potential I needed to step up the presentation. That’s why I decided to go with the conventional magazine format. It’s proven to work out well.

I’m definitely a fan of printed magazines, especially beautiful ones! Now that you’re releasing Issue 2, have your feelings or ideas changed about the medium of magazines? I am curious about what you’ve decided to change in format, or what seemed to work really well in the first one, and whether you’re continuing that trend?

For the most part I’m keeping consistent with the format of last year’s issue. I want to give people something to grow comfortable with up to a point. I was really happy with how the last one turned out visually but I thought I could shake some things up with the actual content and provide a wider variety. I definitely addressed that with this newest issue.

Who are some of the artists and musicians that Issue 2 features and, if you had to pinpoint an overall message, what do you think it says – about Baltimore? about artists?

I wouldn’t say there is a theme for the issue but Lor Scoota’s death was definitely something that stuck in the back of my mind while putting this together. My hope is that by continuing to make True Laurels I’ll be able to reach an artist like him earlier on in their maturation and help them get out of a situation that may lead to a similar fate. Maybe it’s silly to think a magazine can do that but different forms of media have been groundbreaking for me in my evolution so I know it’s possible.

Can you talk about your own mission and role, living between NY and Baltimore? Which city do you identify with more and why? Do you hope to create some cross-pollinating for Baltimore based artists?

I’m always going to identify with Baltimore more because it’s my home. I’ve never lived anywhere else before this past September so I still feel like a visitor in New York to an extent. I spent my first year of college in Brooklyn but I was living in a dorm so I didn’t really get to experience what true NYC living was then. I’m back and forth between the two cities on a weekly basis. So my favorite thing to do is spend my work week in Brooklyn then come home on weekends to spend time with my daughter and look around and imagine how I can get these young artists’ work in front of the people I cross paths with in the music industry on a daily basis. 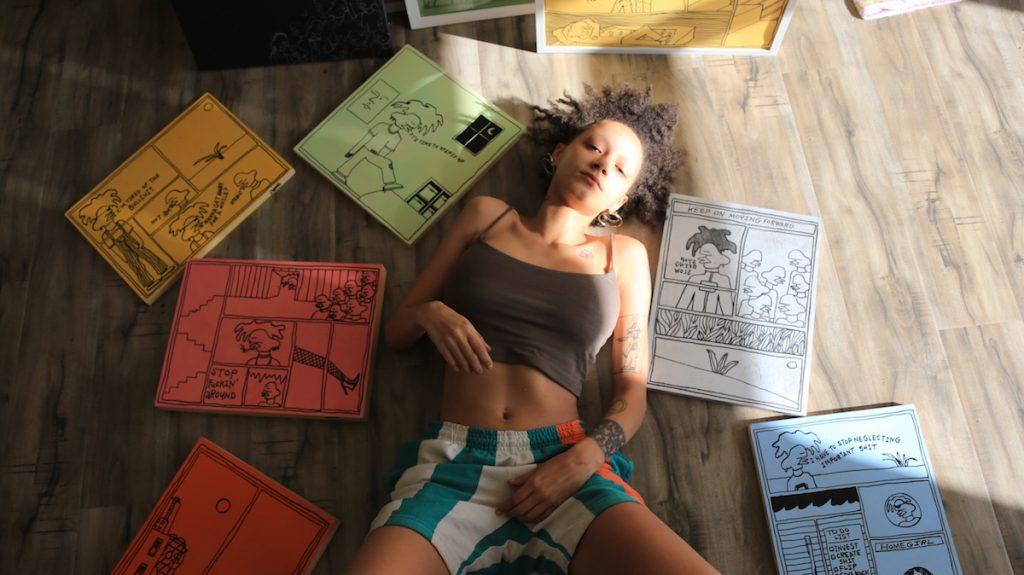 My role hasn’t changed much since moving. With being a staffer at a leading publication, the level of responsibility I have has definitely increased. But I feel like my mission has always been to expose people to a wide spectrum of music being made around the world, especially by black artists. And since I’m from Baltimore and care deeply about the city nurturing its talent and producing stars, I’m dedicated to doing my part in making that happen. Even if that just means staying on Youtube for hours seeing what young artists are releasing in the city and getting their stories out into the world. I get a rush from that shit.

The scene has grown so much in 3 years. Not too many things make me happier.

I think we both agree that Baltimore has a ton of unrecognized talent, and that magazines are an amazing way to showcase that talent. Do you have strong feelings about being hyper-local, global, or do you think it’s possible to be both??

I think I can successfully be local and global. I’m obsessed with learning the local culture of cities around the world. How accents change in different cities. What sneaker is popular for young black kids to rock in somewhere like Milwaukee. How kids are cutting their hair based on location. Basically, anyway to distinguish regions and cultures.

I know I’m not the only person who gets a kick out of learning from other people. So, in short, yes I do think I can keep True Laurels Baltimore-centric and continue to expand the brand. I also have a feature in each issue from a foreign country which is intended to be a cultural exchange. If someone in Cuba is featured in the zine, people from Baltimore who read it will be exposed to that part of Cuban culture. And, in turn, the Cuban people who read the zine will learn what’s going on in Baltimore. So that’s always been my thing: putting people on. 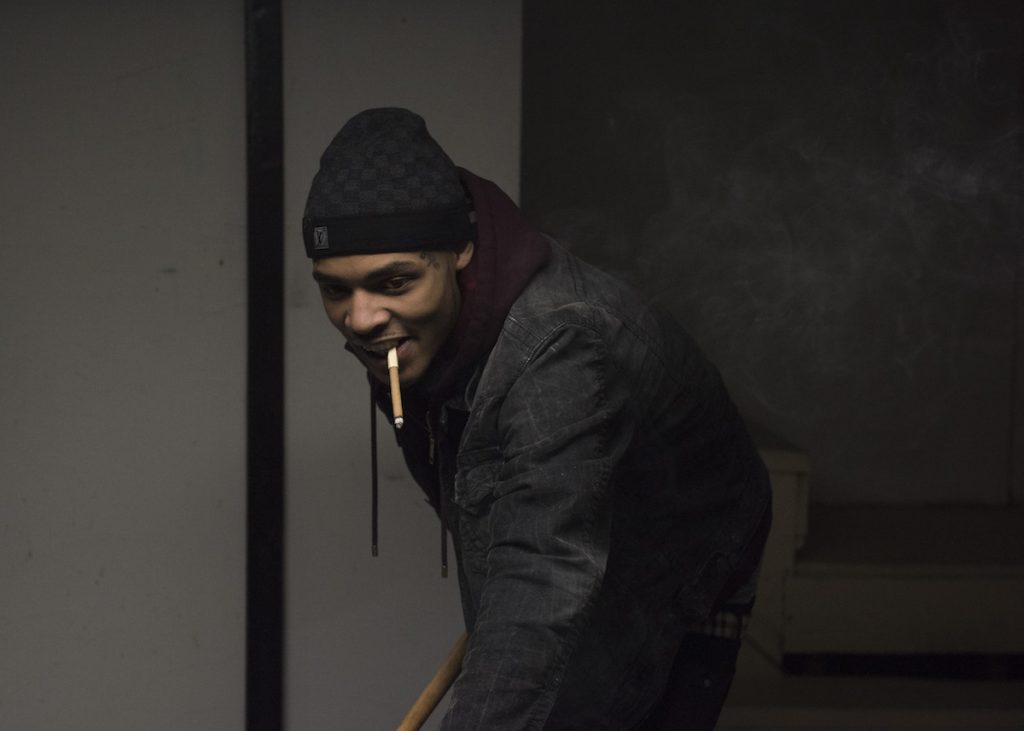 With your magazine and its subjects in mind, where would you like to see Baltimore (and it’s art scene) in 5-10 years?

As far as where I’d like to see Baltimore in the next 5-10 years, it’s a loaded topic. Selfishly, I’d hope that True Laurels by that time will have empowered enough artists to continue pursuing their passions and we won’t be thinking of ourselves as overlooked or lesser-known creatives. I want the zine to act as an archive in that way. If someone in 2030 looks back to now, they’ll have True Laurels as a reference.

I do hope black artists get a piece of the pie that’s being baked right now. That way, they can continue telling our stories, especially in a time like this where the tide is turning so rapidly.

On the other hand, the Baltimore that I know and grew up in doesn’t seem like it’ll be here 10 years from now—not in its fullness at least. It looks likely that most black people from the inner city will be living on the outskirts and the city will be a watered down version of DC., devoid of the character that even makes it special. But as black people have proven to do over time, we will adapt. We’ll make the distant parts of the city and the county cool and have our own shit popping, then someone from the outside will come poking their nose around 25-30 years down the line and think “Hmm, I’d like to live out here. There’s potential,” not realizing that the reason they’re even attracted to it is because the flavor we gave it.

I do hope black artists get a piece of the pie that’s being baked right now. That way, they can continue telling our stories, especially in a time like this where the tide is turning so rapidly. It’s gonna be crucial to look back on this time and know how black artists in the city were processing these changes. True Laurels is just one of those platforms, documenting what is going on.