How to Become Your Own Artist-Advocate: Matthew Mann 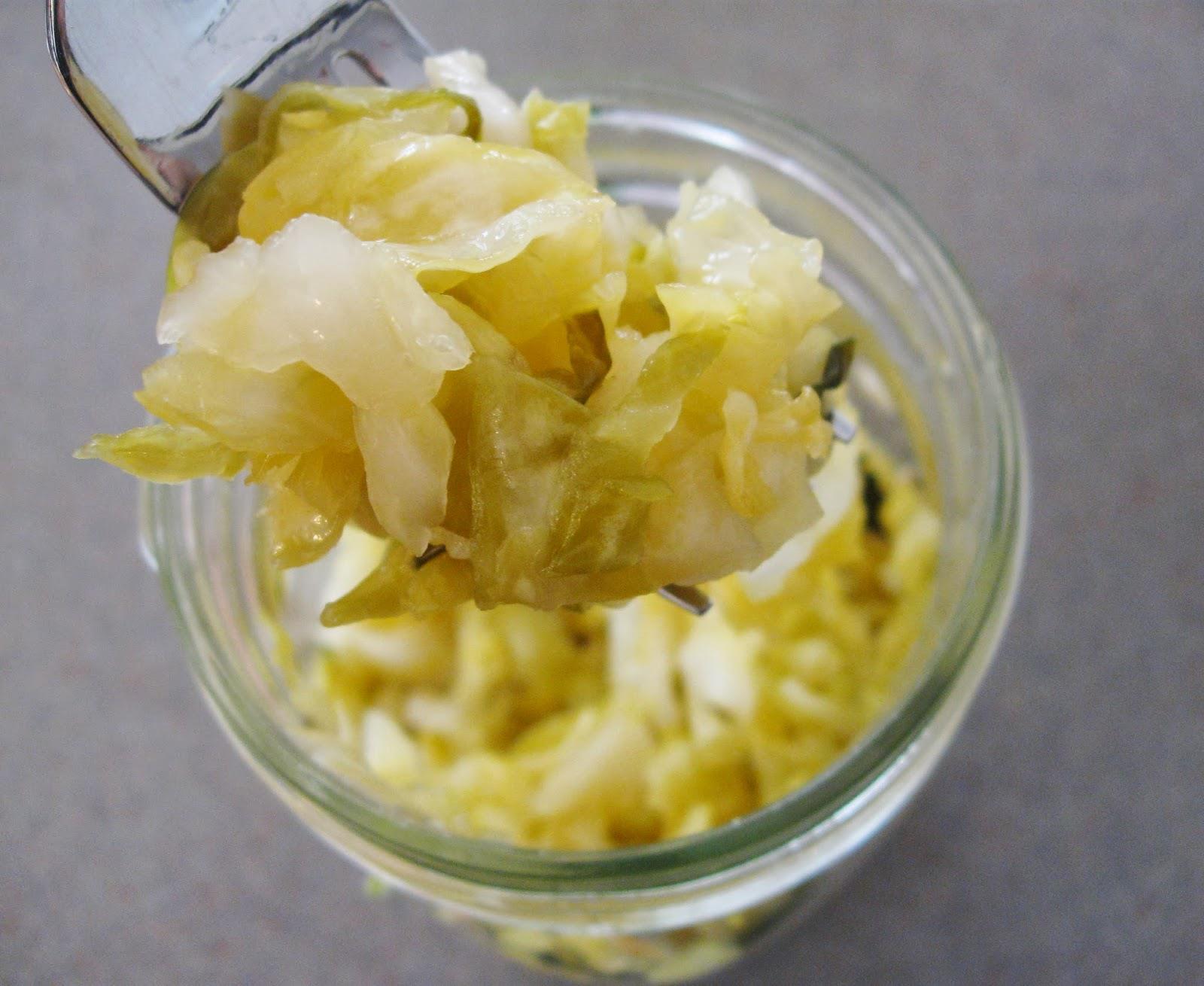 The Internet is Exploding

Professional Development & Career
How to Become Your Own Artist-Advocate: Matthew Mann 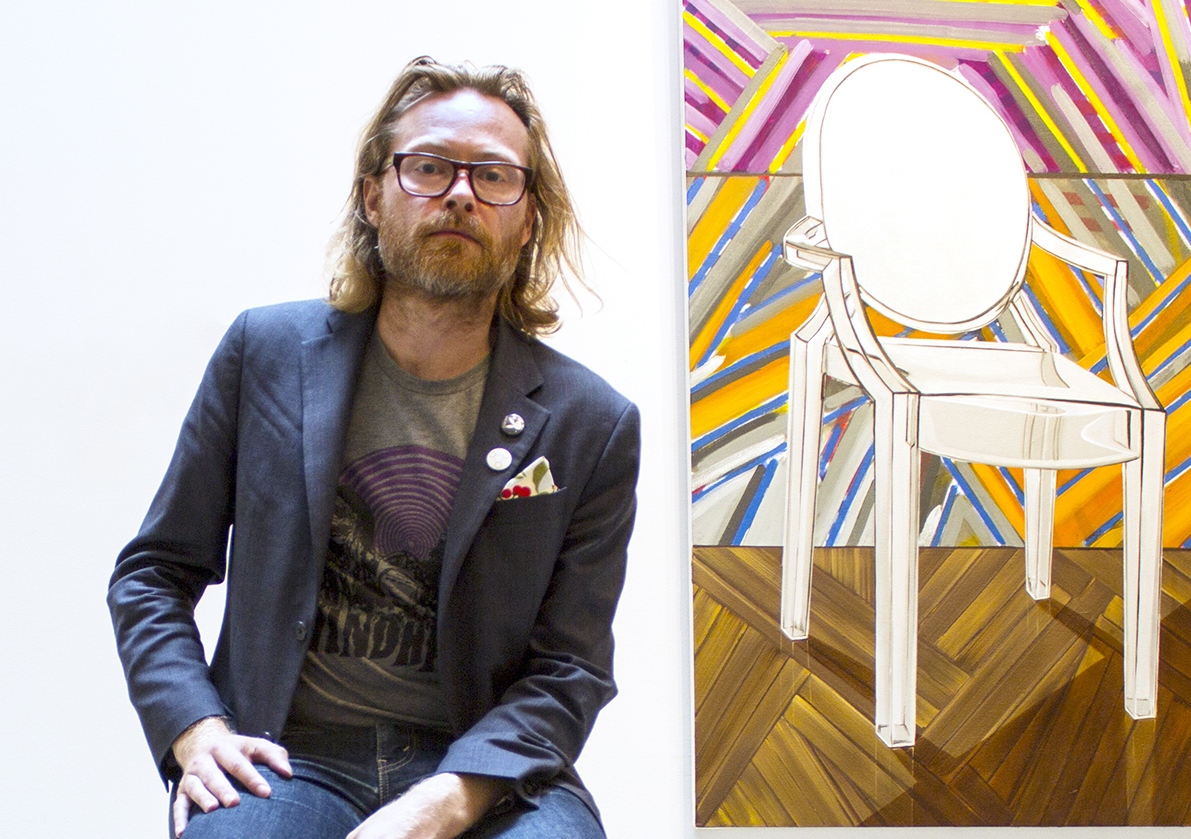 Abandoning the Gallery Safety Net with Matthew Mann, A DIY Guide for the Mid-Career Artist

Given the chance, any DC-based artist or patron might spend time reminiscing about the galleries that used to be here, the neighborhoods that used to have art, and the creative opportunities that might have been, followed by climbing real estate prices, aggressive developers, and studios that once were havens for the creative brain trust.

This changing cultural landscape and the art spaces we used to have are well documented in Blair Murphy’s Lansburgh Notebook project. DC’s artists are in a state of flux and the danger is in waiting to see what happens instead of stepping up to make things happen.

If artists are fortunate enough to receive opportunities and show their work in DC, there comes a point where the venues and opportunities start to dry up. The non-profit galleries that are still here can’t keep showing the same artists.

As a mid-career artist, Matthew Mann is at an interesting crossroads. He now finds himself facing the question: What is a mid-career artist to do once they’ve navigated through the local galleries, completed a developmental fellowship, had studio space in a building full of creatives, and spent time with gallery representation only to have that gallery close?

Instead of lamenting a lack of opportunity, Mann has taken proactive steps to be his own advocate. I spoke with Mann about this position, and how he recently rented out a space to put on his own gallery show and took over the role of promoter and curator. 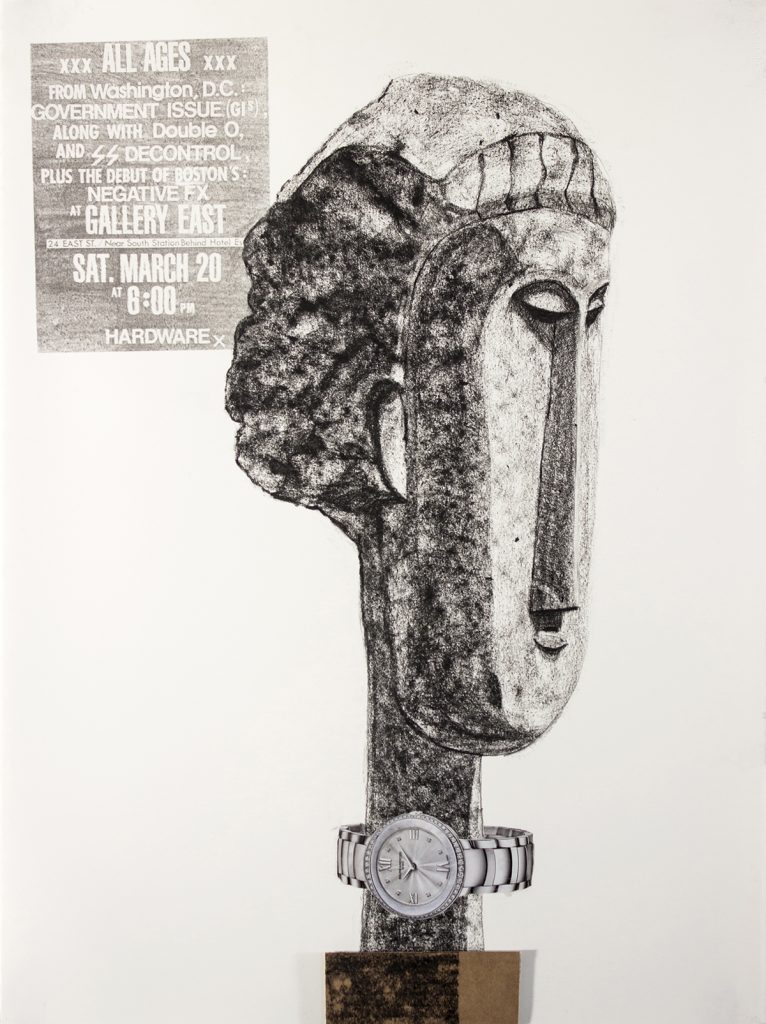 BmoreArt: So tell me about the model of Studio 1469. It’s not a traditional gallery or non-profit space.

Matthew Mann: ​Studio 1469 is a venue for all kinds of things. Its model is a straight ahead rental by the day, or month, or hour schedule depending. In the past I have seen concerts there as well as art exhibitions such as the one I mounted. It’s a really great resource that it doesn’t seem like too many people know about yet.

I feel like I met Norm Veenstra (the guy that owns it) as he was finishing the renovation of the building about 6 years ago. It’s a really nice space and a passion project for him I think. He just wants it to be available for artists, musicians, theater groups, whoever, which I think is admirable. Beyond the leasing of the space there is no curatorial or other commercial exchange: no commissions on sales or anything like that.

How do you see a space like this fitting into your career at this point?

As for my career I had hit a point that an art friend had been cautioning me about, as I was coming out of a Hamiltonian fellowship. I was in a position of representing myself, able to sell works by myself, but with little visibility in the community which is important in a lot of ways. So this show is a way to have a measure of visibility while still representing myself. The last solo show that I had had in DC (my home) was fall 2014, and I like to try and have a solo show about every two years. It’s just a personal goal I guess.

I also began to think about how bands work: they make their music (studio time), tour and meet peer bands (not unlike artist residencies) and book their own shows (Studio 1469!). Sometimes they get asked to tour or something (curated group shows), but largely I guess I was inspired to think of myself as an artist like an independent band. 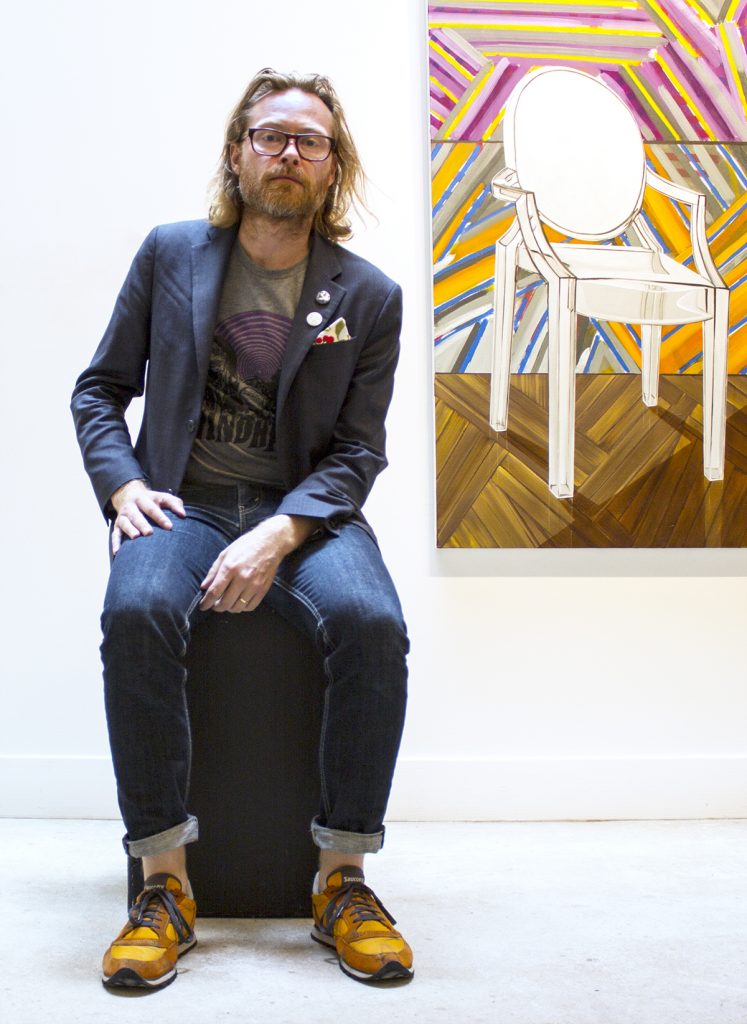 What are the pitfalls and successes of working there? How has this experience been much different than working in other galleries?

Well the pitfalls are like the successes, in a way. A traditional gallery will do everything minus create the artwork. A gallery will often do all of the collateral: press releases, reminders, price lists; vinyl for wall text if you’re into that kind of thing; do (and pay for) the booze run for the reception; and instal/deinstall. Then they reach out to email contacts to get press, entice collectors to pay a visit to the show; programming talks; then constant social media. All the things that I just mentioned are not in my wheelhouse, not even natural to my shy, introverted personality, but had to be done.

I have to mention here though that my wife (Amanda Jiron-Murphy) is a professional gallerist/dealer in DC and helped me tremendously structuring a workflow for all of that extra work. So that’s helpful. But those are all the pitfalls as I see them. However, I feel a sense of success at having undertaken them with some measure of effectiveness. This is my first time out without the gallery safety net, so I feel proud about what I learned and a little better prepared to work with galleries in the future.

Do you see this as a viable alternative for artists with a body of work to show?

​Absolutely. No question about it. Just be prepared to do things which might not be natural for you, like, for me, spelling correctly and talking to strangers. 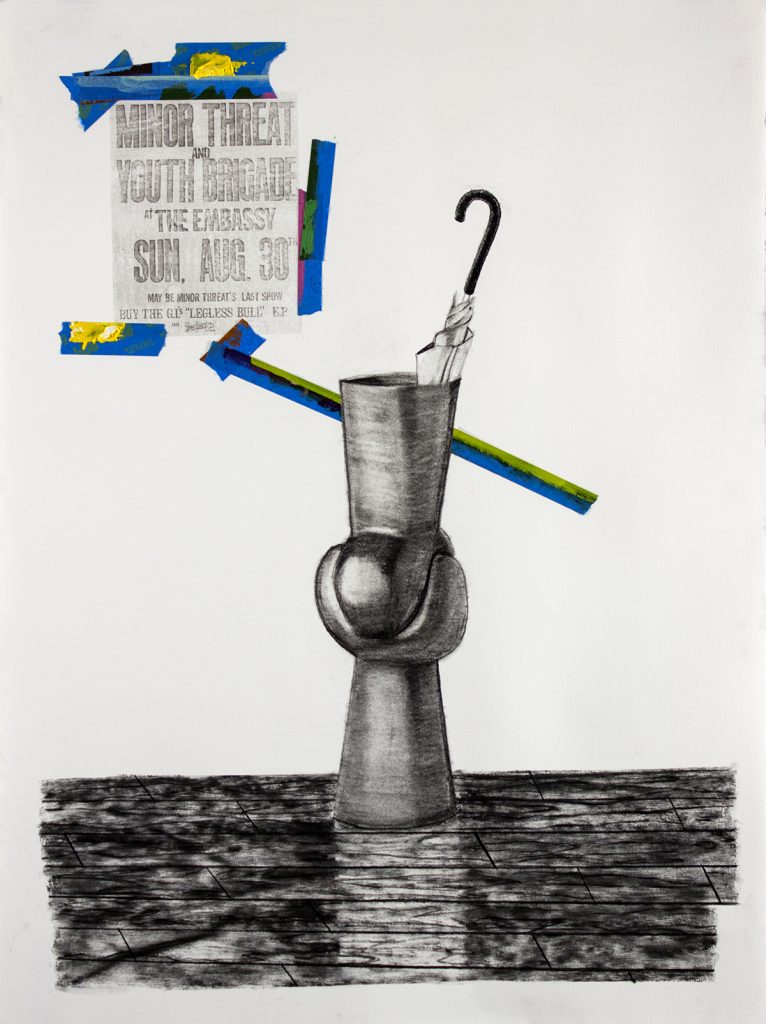 How was going through the Hamiltonian Fellowship helpful for your career? And how did you go from there into being represented by a gallery?

The fellowship is designed to be a professionalizing program for artists, but I have always had a decent workflow on the backend: updating images, templates for CVs and artist statements so that I can turn things around quickly for applications and opportunities. One way that the Hamiltonian Fellowship was instrumental was forcing me into a position of thinking about the realities of being an artist in the world and/or market, what I what from it, how I want to engage it.

I still think about that and probably always will, it’s a complicated and free flowing thing, but the first time Hamiltonian took my work to Art Basel Miami Beach my brain fell out of the back of my head. I went from this small, self-important little world of my studio and my delusions of grandeur while there, and into the sausage grinder of the art market. Also realizing how enormously ambitious and hungry every other artist is in that context is something to contend with. It results in a lot of late nights drinking the free booze and commiserating with my cohort of fellows and friends about what the fuck was going on around us? Why wasn’t everyone congratulating us for being special little flowers?! Like I said, delusional. My second time was quite a bit easier.

From Hamiltonian I went to Project 4 Gallery, which was three flights up from Hamiltonian in the same building. The owner of that gallery was also affiliated with Hamiltonian. He liked my work, and we joined forces until they closed up shop in late 2014 I think. I have been representing myself since that time. 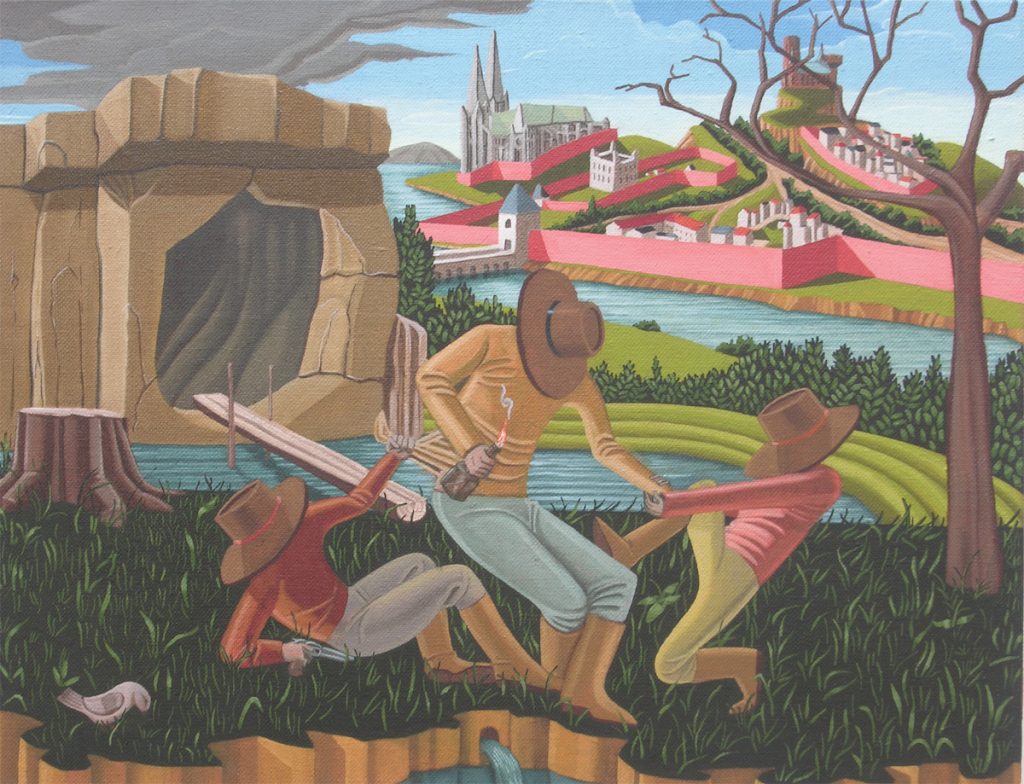 Now that you’re not represented by a gallery how has that changed how you promote yourself?

Not a ton. I still have to do the same things. It is kind of a false notion that because you have a gallery selling/exhibiting your work that you get let off the hook in terms of promotion. The gallery itself isn’t really the end point. The gallery offers a stable of collectors and audience members ideally, but the artist still has to hustle. That was another lesson from my time at Hamiltonian.

One major change with promotion of course is social networking. I have some friends who are vehemently anti social networking as a promotional tool. I fall somewhere in the middle and/or ambivalent about it. I am not an enormous fan of social media but engage it because that is where a lot of people are. It’s a kind of passive tool. Recently I have had to use it much more than I normally would in order to get people to Studio 1469.

My preference though I think is talking and handshaking, more direct and the right pace for the slowness of the art experience. Social media works more at retail speeds than art speeds. It’s serviceable enough to get the word out fast, but is pernicious with regards to the algorithms that are unleashed on your inbox and feeds which I don’t appreciate. Funny enough I have been hash-tagging so many things “luxury” and “trouble” and various hardcore bands and have gotten these promoted “Instatweets” for Lord & Taylor and Barneys and stuff featuring these dour models in punk t-shirts and blazers. Just such obvious, algorithmic capitalism, but so way off! Everyone knows I leave the house in a metal band t-shirt and a blazer.

As you’re about to vacate your studio space, how has that changed your practice?

The studio move has coincided with a change in the work. I am not sure which came first, but for the first time ever I feel like I can focus on some other impulses that I would normally ignore, and that will ultimately nourish the paintings in the future. 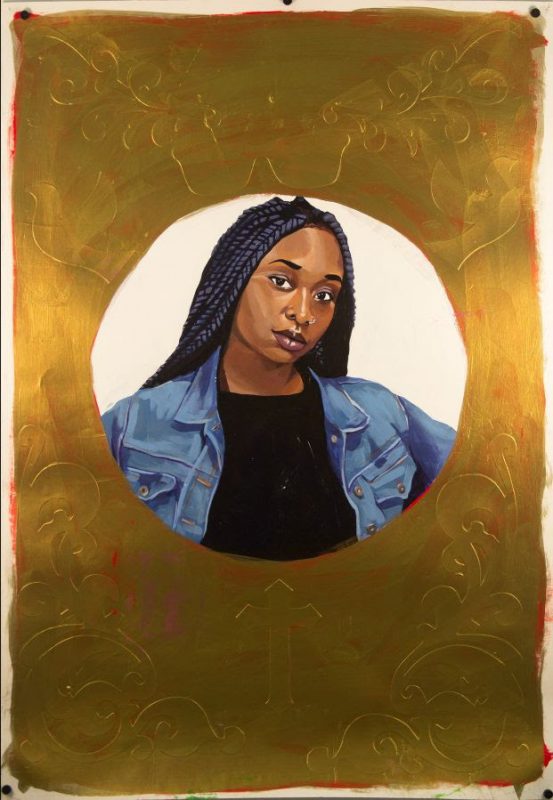 This week: Katherine Tzu-Lan Mann at Morton Fine Art, Kei Ito at UMBC, Bill Schmidt at MONO Practice, Margaret Rorison and Monique Crabb at Current, Somethin' to Say at Galerie Myrtis, a call for proposals for the 2021 Gutierrez Legacy Grant, and more. 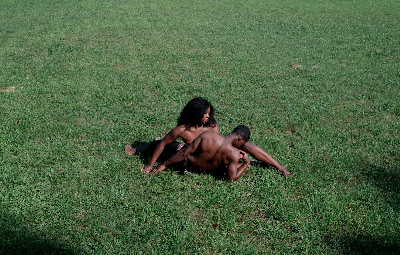