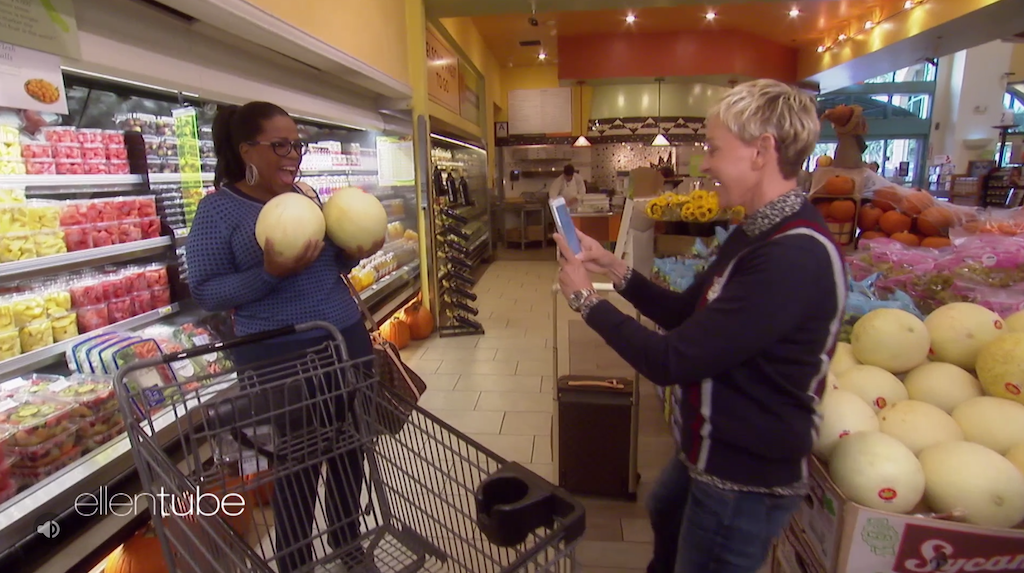 The Internet is Exploding: 10 Must Read Articles [...] 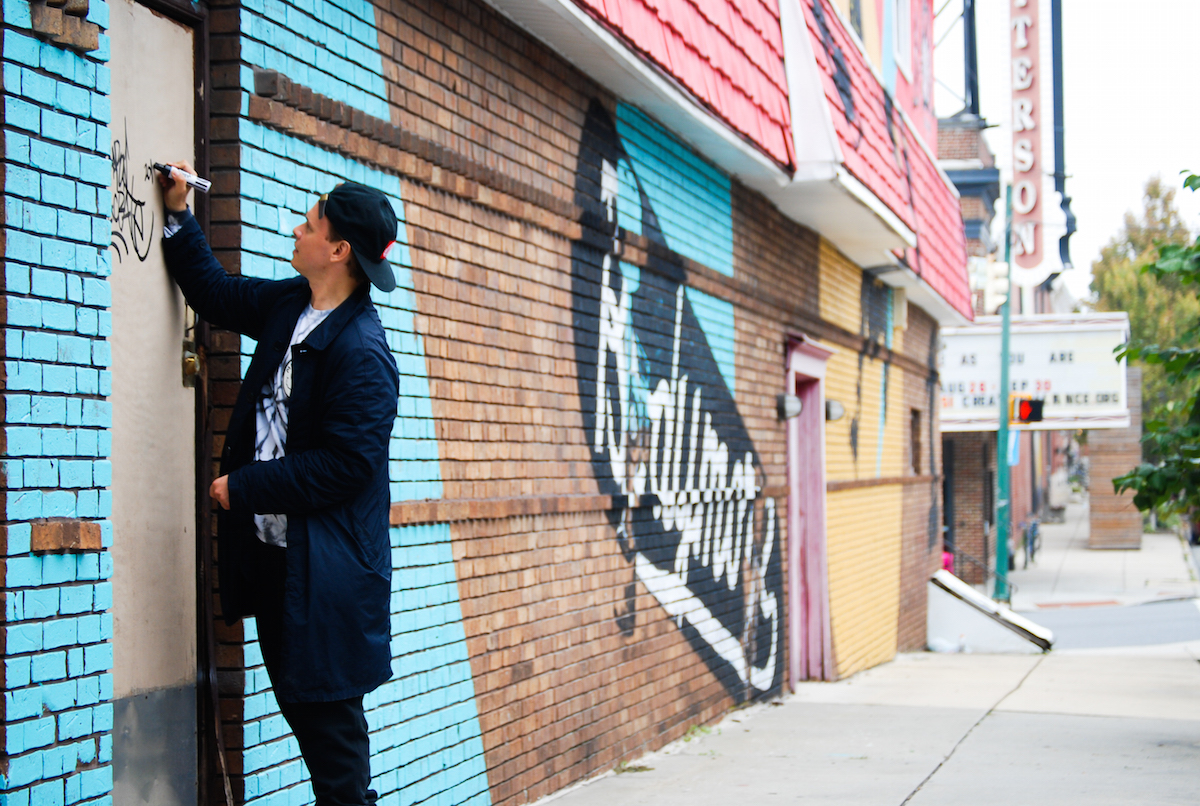 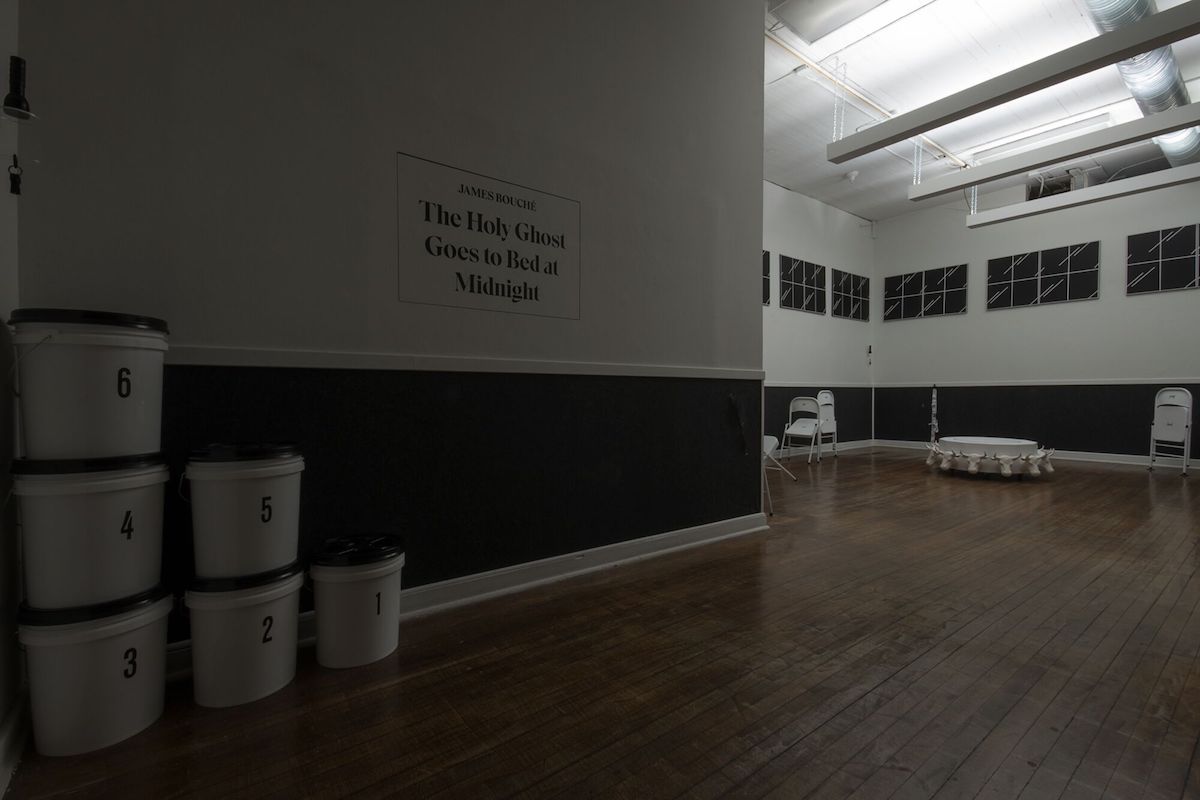 How many times have you wanted to run screaming from a room when someone mentions they had “the craziest dream last night”? Unless you are paying me, I don’t want to hear about your weird dreams. I have plenty of my own incomprehensible symbols to figure out and I know they’re not interesting to anyone but me (and my shrink).

There are certain artists, however, who manage to transform their esoteric visions and memories into truly magical creations. In these cases, the ability to edit a personal symbol into something experiential makes all the difference. Artists such as Yayoi Kusama, the AES+F Collective, Matthew Barney, even the immersive web-like architecture of Tomás Saraceno, currently on view at the Baltimore Museum of Art, are successful because they show rather than tell. These artists invite us to partake in the action with them in order to encounter it in our own way.

In the case of James Bouché’s elegant solo exhibition, The Holy Ghost Goes to Bed at Midnight at School 33 Art Center, there is much the artist could tell us. The show mines his memories of growing up gay in the Mormon church, and could have been self-righteous, didactic, and stilted, focusing on the trauma and guilt suffered because of his secret within a repressive, cult-like environment. This show could easily have functioned as therapy for the artist, like Auguston Burrows in 3D, but does not.

Thankfully, Bouché is more interested in crafting the objects of the present rather than literally mining his past. As such, he is able to successfully translate his personal narrative into a compelling and mysterious installation that relies on his own vivid memories as a springboard, but without letting nostalgia overwhelm his aesthetics.

Bouché presents his memories intimately, but makes them immersive and universal. If you were trapped in a childhood that felt wrong to you, and secretly longed for a forbidden adult life, one with razor sharp aesthetics and a touch of S&M, how would you imagine your future? Bouché’s answer is a dark and magical show that evokes the sense of being alone in church late at night, as though you’re trespassing in a ghostlike and forbidden zone. 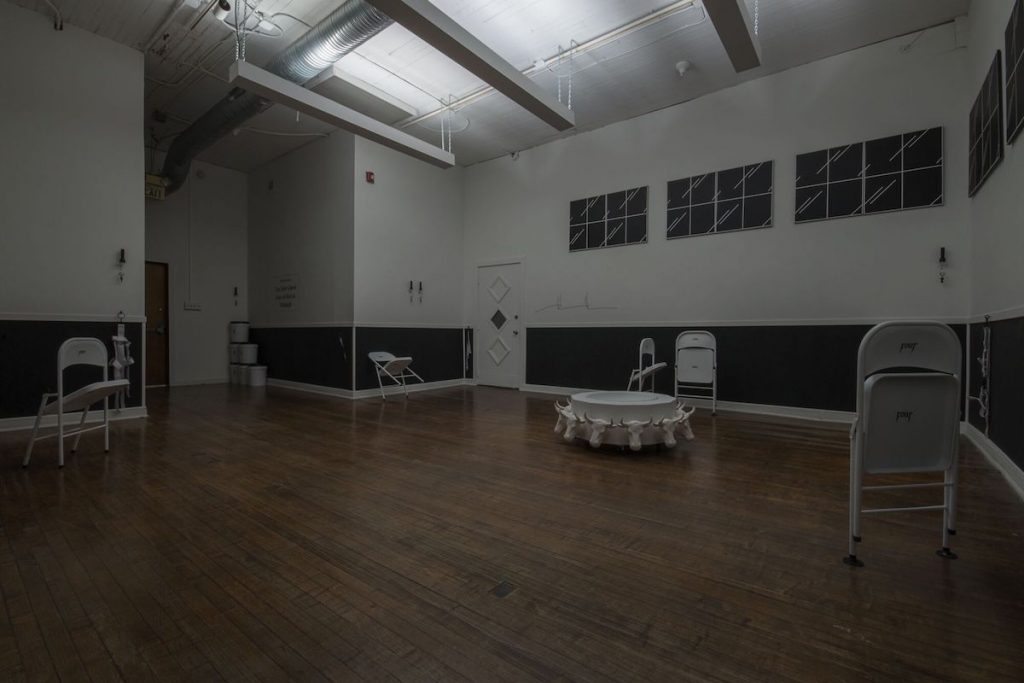 This installation starts with a deliberately odd choice in lighting. Dusky twilight fills the entire gallery space rather than the usual overhead fluorescents, easing you into a surreal black-and-white world. Printed panels boasting simple geometric grids and white diagonals become flat-black windows that line the top few feet of the gallery, well above eye level. The high placement of these nighttime windows make you feel smaller, a younger age. They took me back to my own childhood sleep ritual, watching car headlights swim diagonally from one corner of my room to the other as I drifted off each night.

Everything in the room reads like colors reflected off of a screen rather than natural moonlight, building a narrative of unreality, of fantasy. Black wainscoting lines the gallery, a goth cartoon version of a boy’s bedroom, setting off visual contrasts with the white objects in the room. 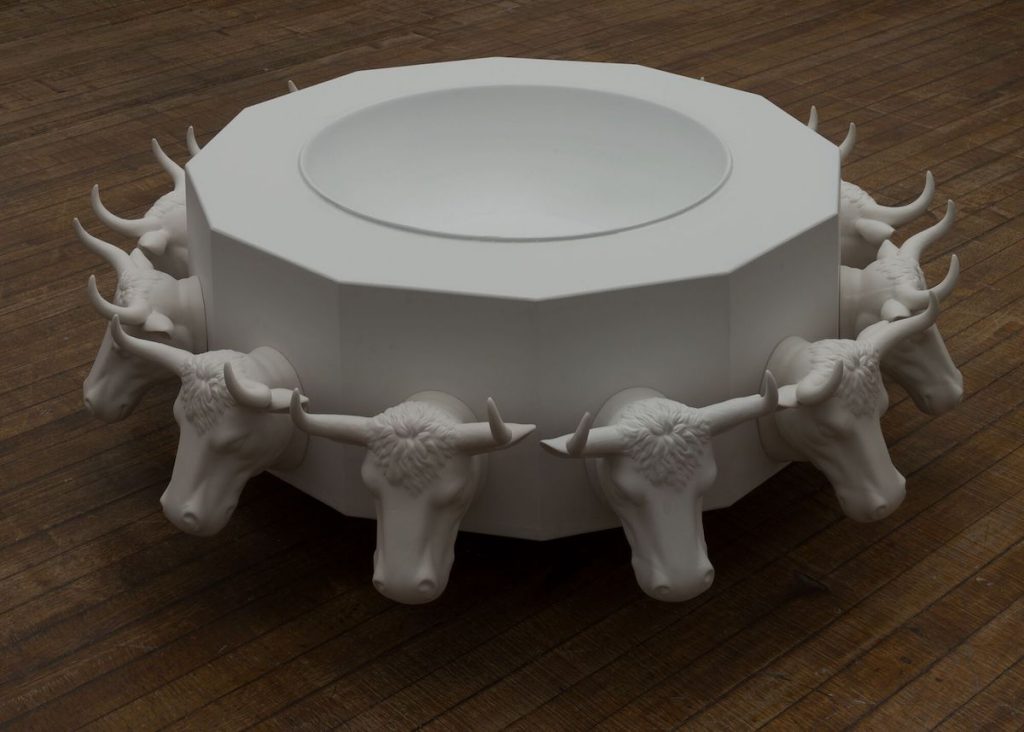 The most dramatic object is a round, white bathtub ringed with twelve ceramic oxen heads, a modernist riff on the traditional Mormon Baptismal Font. Five white metal folding chairs lean in areas of the room with numbers printed on them in scripted text, hinting at the artist’s family members and rendering them as generic church participants. Large white buckets sit near the main doorway of the gallery with black numbers, 1 through 6, a reminder of the Mormon belief in keeping a six month food supply on hand in preparation for the return of Jehovah and the afterlife.

Curiously, the occasional small strap or restraint is attached on the gallery wall like an odd bondage festoon, alongside black flashlights and keys. On a far wall, three mirrors sit at eye level, emblazoned with white diagrams and text, making the viewer a participant in this dream, as you view yourself in and through them. In a similar abbreviated style to the mirror images, a cartoon drawing of a curtain, rather than an actual curtain, is attached to the wall in vinyl, representing a pinnacle of the Mormon faith: the holy separation between God and man. In this case the stylized drawing functions like a caricature, it’s flatness suggesting the artist’s own questions and doubts about its relevance to his life. 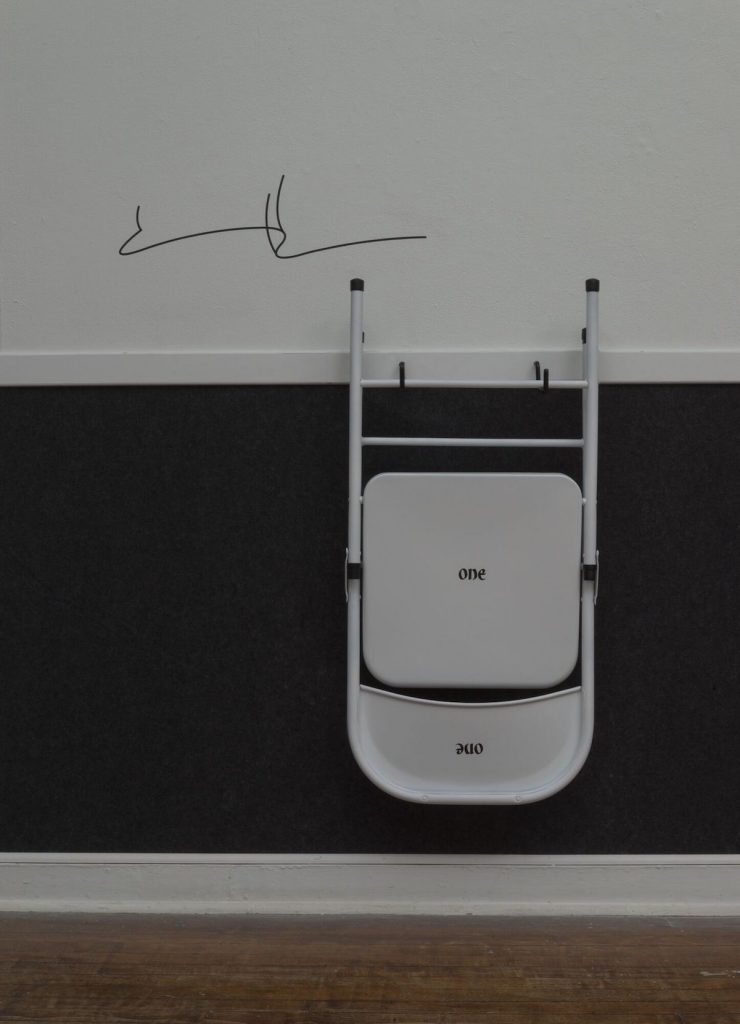 There’s a lot of white space here to ponder, but Holy Ghost feels strangely full, as if there is just enough specific detail for you to slowly piece the story together. Even if you have no idea what any of it means, the precision of each detail crafts a relevance and solemnity. Everything is black, white, and metal, building a seamless cohesion into the fantasy.

Those familiar with the Mormon faith will recognize the symbols. The color white, the six-month supply of food in buckets, the form of the curtain, the bath ringed with oxen; these all reclaim aspects of a religion obsessed with the afterlife where members spend their time in the temple baptizing the dead by proxy in white gowns, angling to earn a higher position in the church, closer to God.

These objects represent the artist’s memories, decoding a world where he was trapped, pretending to be someone he knew he wasn’t. What’s most interesting about them, both as queered and aestheticized symbols, is how Bouché manages to maintain a consistent aesthetic, simultaneously congruent with his memories of Mormon dogma and also unique, transforming remembered objects without compromising their intrinsic beauty.

The series of three printed mirrors are crucial; they present the transition between childhood and adulthood, embodying Bouché’s childhood vision of himself as a secret sinner who transforms into an empowered adult. The first mirror says “60. condemn,” and depicts a 1950s styled diagram of a sleeved hand pointing a finger in a chiding “No, no” motion. The second mirror, reads, “118. fornication (“sleeping around”)” and a similar diagram mimics a sideways aggressive motion, or possibly simulates a hand job. The third mirror reads “36. bondage,” and shows the arms wrapping something up with hands curled up into fists. 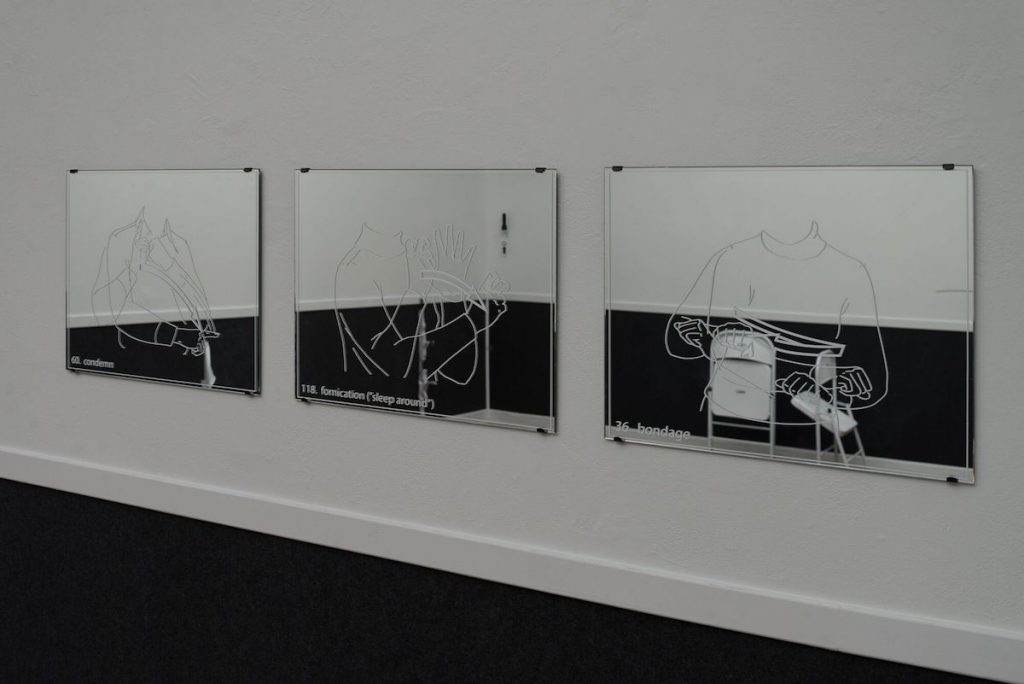 In each mirror, the white drawings are difficult to read. You have to come in close to see yourself and the room reflected in it, to decode it. These mirrors implicate you as a participant in this fantasy, where it’s unclear if bondage is the starting point (a gay youth trapped in a repressive church), end point (an adult interested in such practices), or a symbol for the entire exhibit.

Either way, as you look into each mirror, you find yourself evaluating each word, and you have the opportunity to reject or accept its judgment. This process of choosing our own vices and virtues independent from childhood prescriptions is exactly what it means to become an adult, not just for Bouché but for all of us. We own our choices when we reject the expectations of others and accept the consequences of those actions.

This process of choosing our own vices and virtues independent from childhood prescriptions is exactly what it means to become an adult, not just for Bouché but for all of us. We own our choices when we reject the expectations of others and accept the consequences of those actions.

This participatory aspect is what I find most compelling about Holy Ghost, apart from its impeccable craftsmanship and seamless detail: it’s an invitation to revisit one’s childhood, both its magical and repressive qualities, and to reconsider our choices as empowered adults. The installation asks tough questions, and provides opportunities for a universal initiation or shared therapy, rather than the fetishization of one person’s trauma.

Have you grown up to be the person you always wanted to be or have you repressed your inner nature? Do you accept your own intrinsic darkness? Do you embrace the painful elements of your past or are you still controlled by them?

The Holy Ghost Goes to Bed at Midnight delivers the opportunity for healing and closure, especially from the romantic childhood longing for one’s future self, offering instead a vision of adulthood which is solitary, edgy, beautiful, and legitimate.